We've had a go on Wahoo's latest trainer - how does it stack up?
by dave atkinson

It doesn’t seem like that long we were all struggling along training indoors on our dumb turbos, wacthing repeats of the Tour de France on VHS. And now look at us! Cruising through virtual worlds with thousands of other riders, on smart trainers that are as accurate as a £5k SRM power meter was back in the day. It still feels new, but this is the fifth incarnation of the Wahoo KICKR, one of the trainers that really kicked off the revolution. Smart training has come of age: it’s not niche any more. Everyone’s at it.

We’ve reviewed the KICKR a number of times on road.cc. The 2018 edition (V4) was well received round these parts. So, what’s changed? Well, you can read Liam’s story about the launch here but basically it boils down to two things: It’s more accurate, and it rocks a bit. 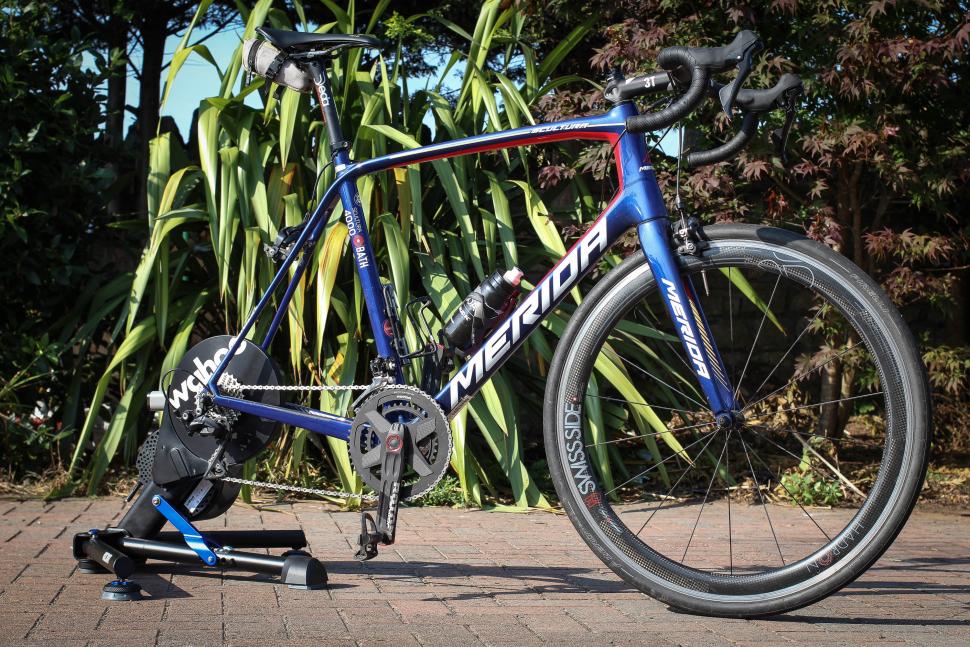 Let’s deal with what hasn’t changed first. The design of the KICKR V5 is very similar to the previous incarnations. It’s a direct drive design – the V5 comes with an 11-speed cassette fitted – and the sprockets drive a 7.25kg flywheel via a belt drive. There’s three legs, the outside two of which fold in for storage and click into place for riding, and you get a neat carry handle for lugging the trainer around. It plugs into the mains and can be controlled via Bluetooth or ANT+, and it’s compatible with all the usual suspects: Zwift, The Sufferfest, TrainerRoad, RGT, Rouvy, Bkool and so on. 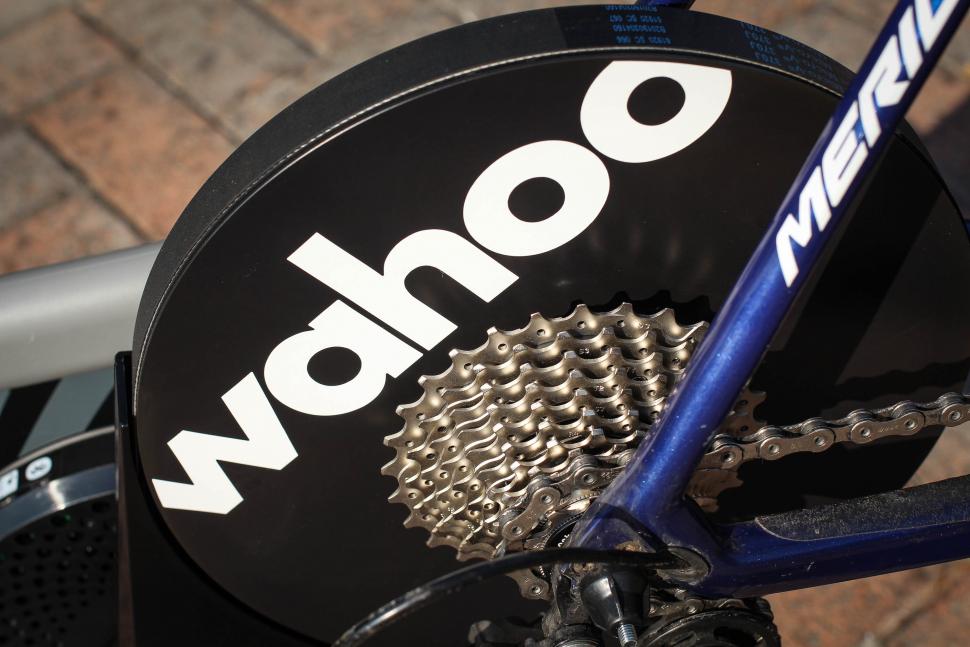 The KICKR has always been a pretty smooth unit and the KICKR V5 isn’t any different in terms of the ride feel. It’s progressive, well balanced and quiet. Resistance changes happen quickly and the trainer is capable of offering 2,200W of resistance and simulating gradients of up to 20%. It’s well specced compared to its direct rivals. 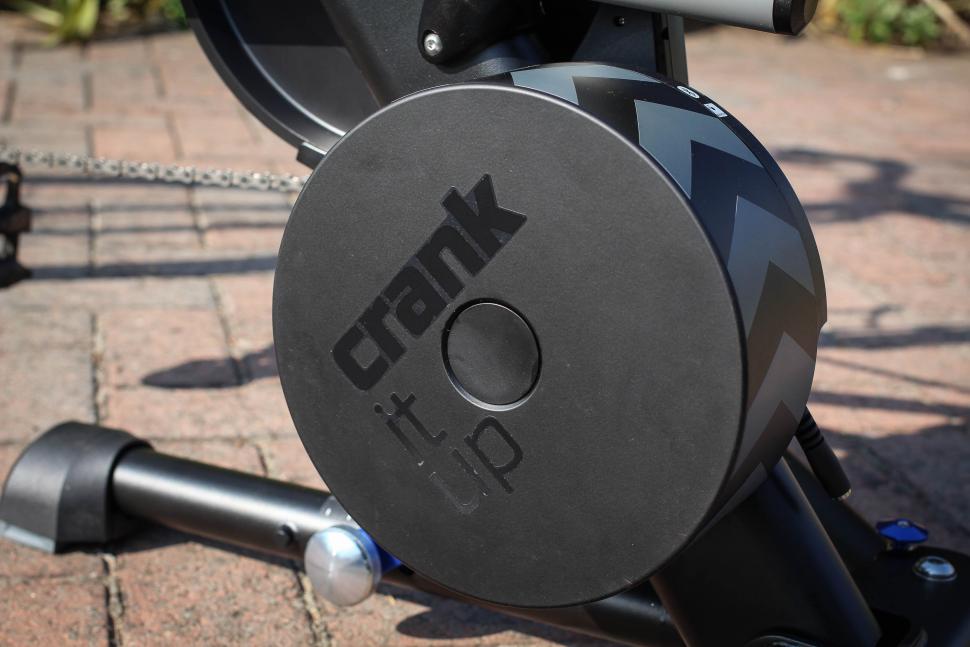 One of the main new claims for the KICKR V5 is that it’s more accurate – to +/- 1%, instead of 2% – and that it’s no longer necessary to calibrate the trainer using a spindown. So I got it out of the box and benchmarked it from new, against my Rotor 2InPower cranks. Here’s what that looked like: 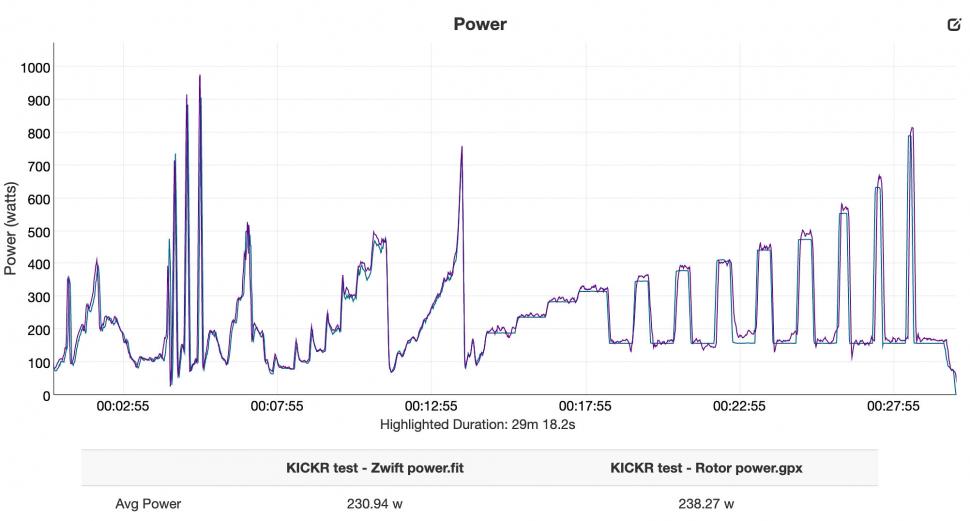 You can probably see that things look pretty positive. The cranks read about 3% higher overall, and you’d expect the crank power to be higher as it isn’t subject to drivetrain losses. So that’s good. 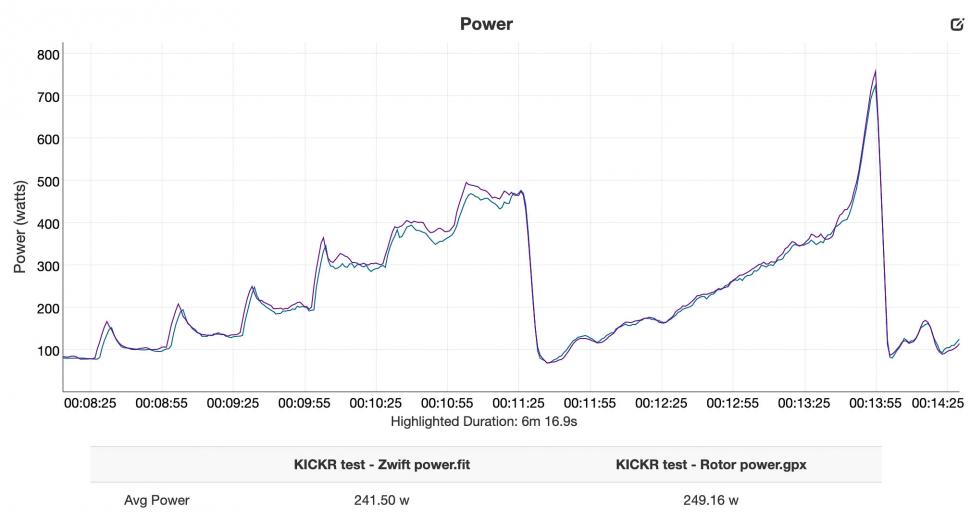 Here’s a couple of ramps, one where I was keeping a consistent cadence and working through the gears, and the other where I was trying to keep the power ramping up smoothly. There’s a bit of a gap at the top of the first ramp but generally things look good. 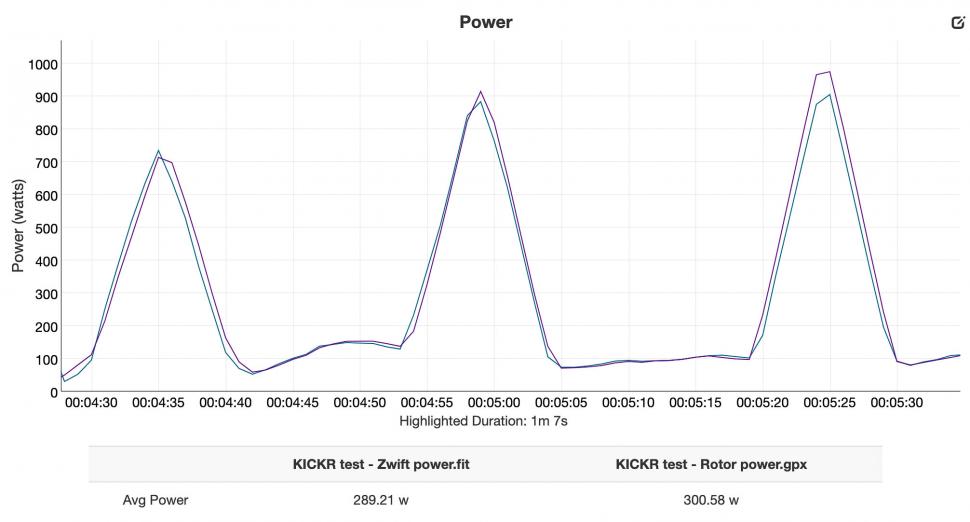 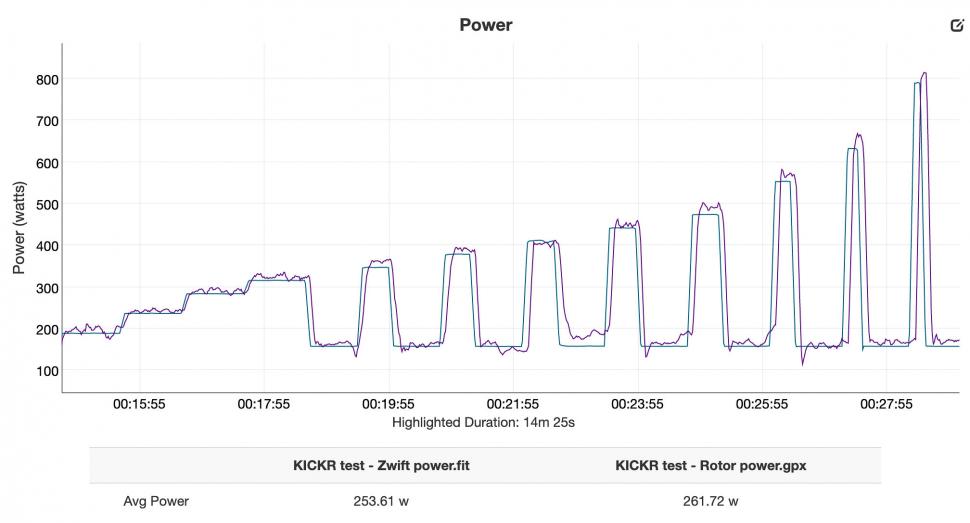 I moved into a standard workout I use for benchmarking after that. As you can probably tell from the graph, the KICKR V5 has ERG smoothing turned on by default. I couldn’t turn it off as the trainer wouldn’t connect to the Wahoo app for some reason.

Anyway, ERG smoothing is a horrible vanity thing and should be killed, but it’s kind of useful to see how it compares to what an actual power meter is reporting. 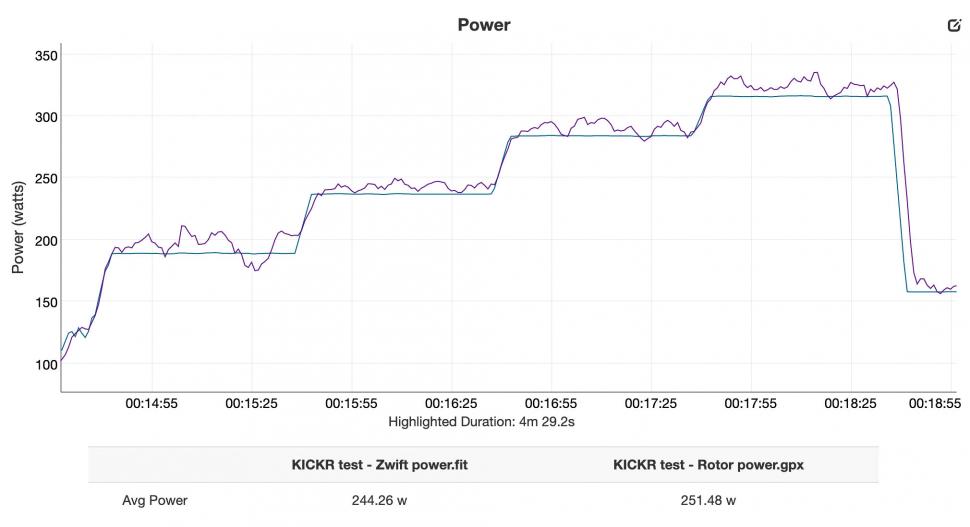 On these lower power (up to FTP) intervals the power jumped about a bit but the KICKR V5 eases in to an effort quite well, there’s no big spike before it settles down like we saw on the KICKR bike and the Tacx Neo 2T. 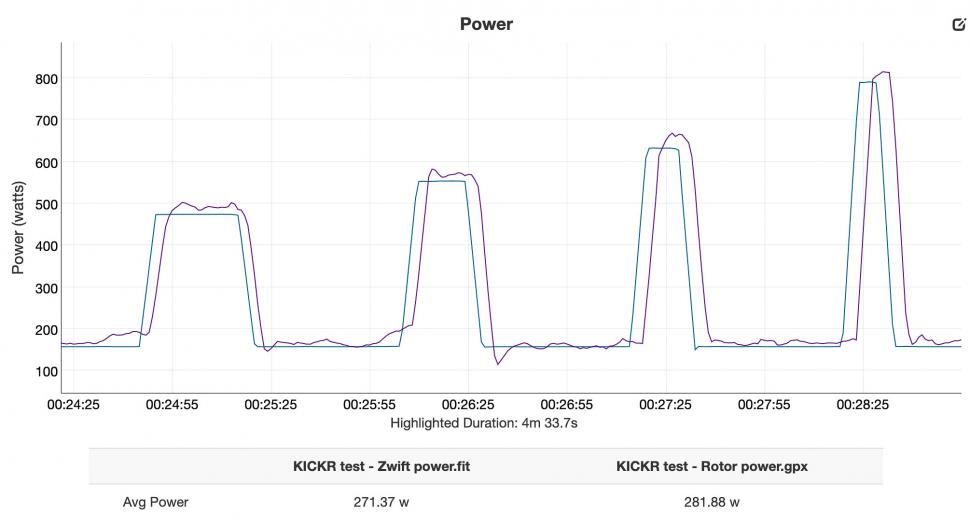 On harder efforts you can see that the ERG smoothing is pretending that the power is on point before it actually is; that's not a time sync error, everything else lined up fine. But again, the resistance settles quite quickly and doesn’t over-compensate when it’s ramping up. 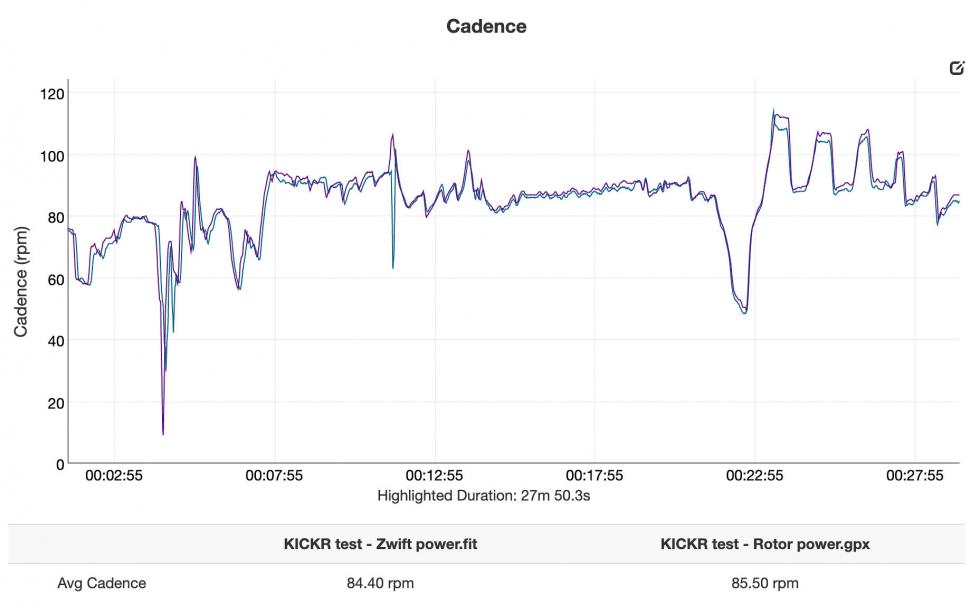 Cadence sensing from the KICKR V5 is pretty good. Overall it reports under the cranks, but not by much. 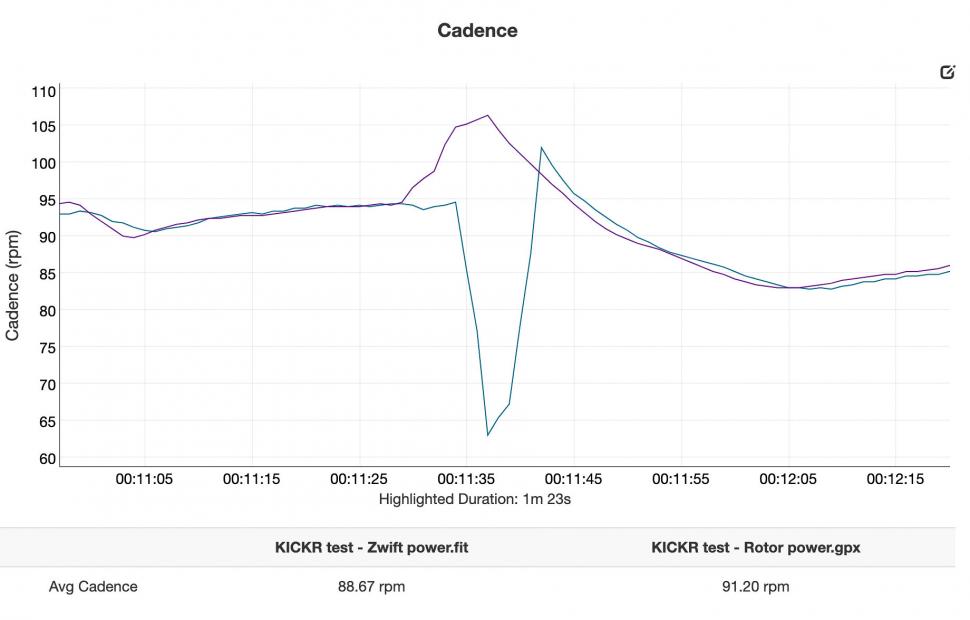 There are a few dropouts along the way… 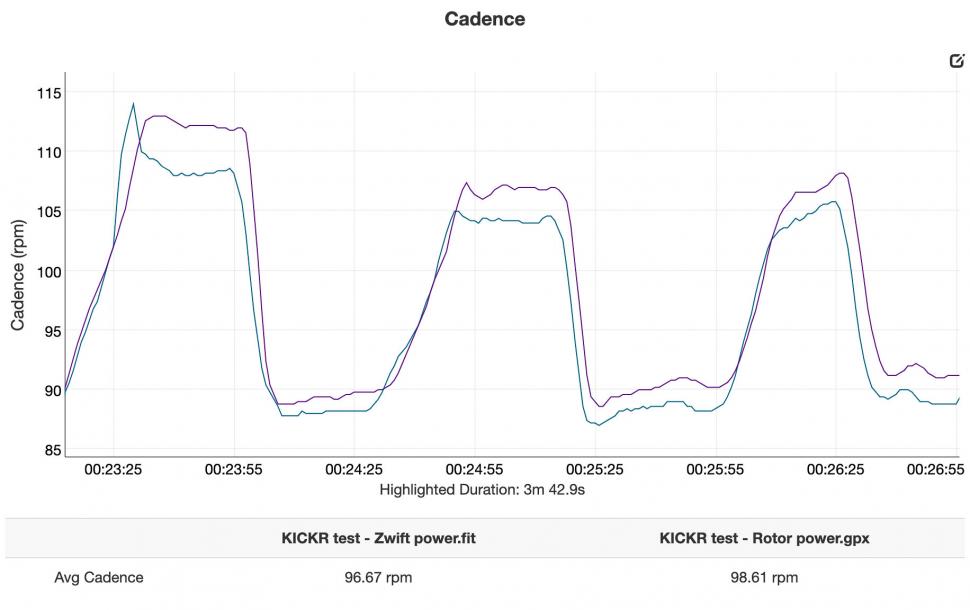 And at high cadence it’s under by 4-5rpm

The main physical change to the KICKR V5 is the addition of the Axis feet, which are able to add a bit of side-to-side movement when you’re riding. 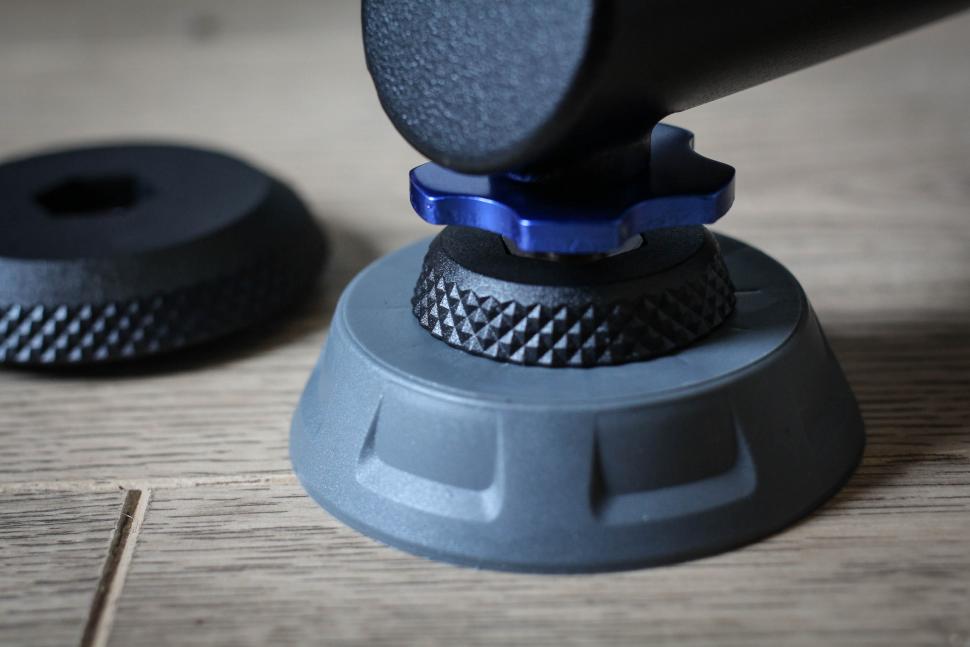 Each foot is basically a rubber bit and a plastic bit. The rubber bit allows the trainer to tilt, and the plastic bit adjusts the amount that it tilts. You get three different sizes of plastic bit so you can tune it to your preference. Wahoo recommends one based on your weight but it’ll also depend on how much movement you like.

Standing up out of the saddle, with the trainer on a hard floor, it’s obvious that the KICKR V5 is more active underneath you than its predecessor was. In terms of how much it moves, it’s a similar amount to the Tacx Neo, although it maybe doesn’t feel quite as controlled.

On a trainer mat, the difference is a lot less pronounced. And you do used a trainer mat, right? I'm not sure I'd be able to immediately tell compared to the previous version. The type of movement is different to the Neo, which is independent of the base. This is the whole trainer moving, which it does anyway on a good mat, a bit. 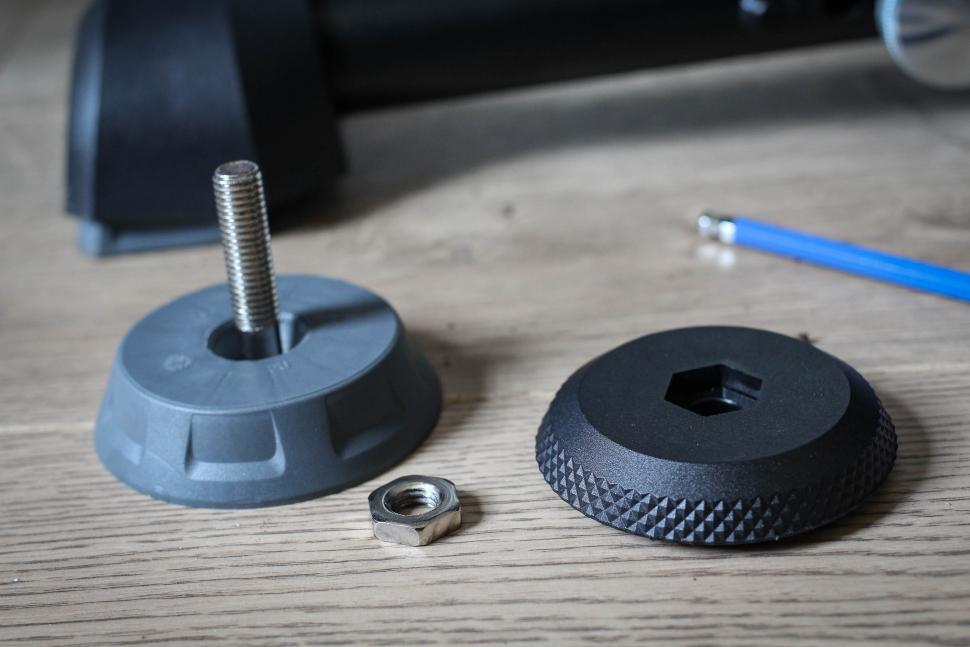 Changing the feet does alter the feel. I swapped out the mid-sized plastic washer for the small one – a two-minute job – and you can certainly feel the difference between the two in terms of how much the bike is doing. I preferred it with the small washers, although I think on a trainer mat I’d probably opt for the middle ones as the mat also offers a bit of give.

Our test trainer did have a bit of a disconcerting click when you moved around on the bike, but without further testing I’m not sure whether that’s down to the trainer, or something on the bike. I’ve only had a short time aboard the trainer, but look out for a full review on road.cc in due course. First signs are good though: the KICKR has always been a good quality unit, and the KICKR V5 looks to continue that.