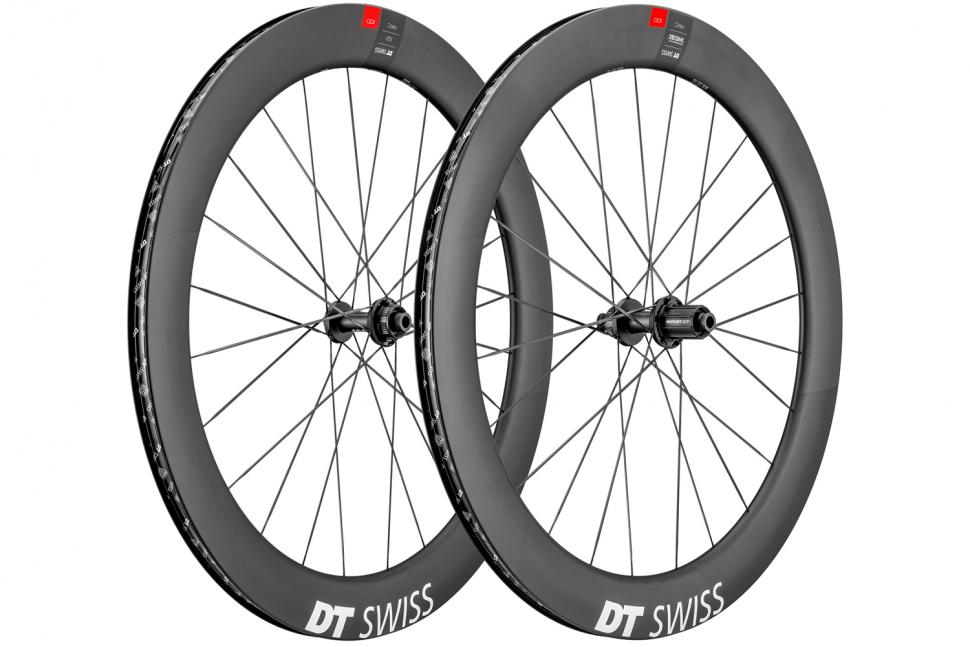 DT Swiss has launched a redesigned ARC 1100 and 1400 Dicut wheelset ranges featuring 50, 62 and 80mm rim depths with “excellent aerodynamics and safe steering behaviour for a decisive competitive advantage.” The wheels both get DT Swiss’ new EXP hub designs and are claimed to be faster than all competitor wheels that DT Swiss tested against. It’s also disc-brakes only. 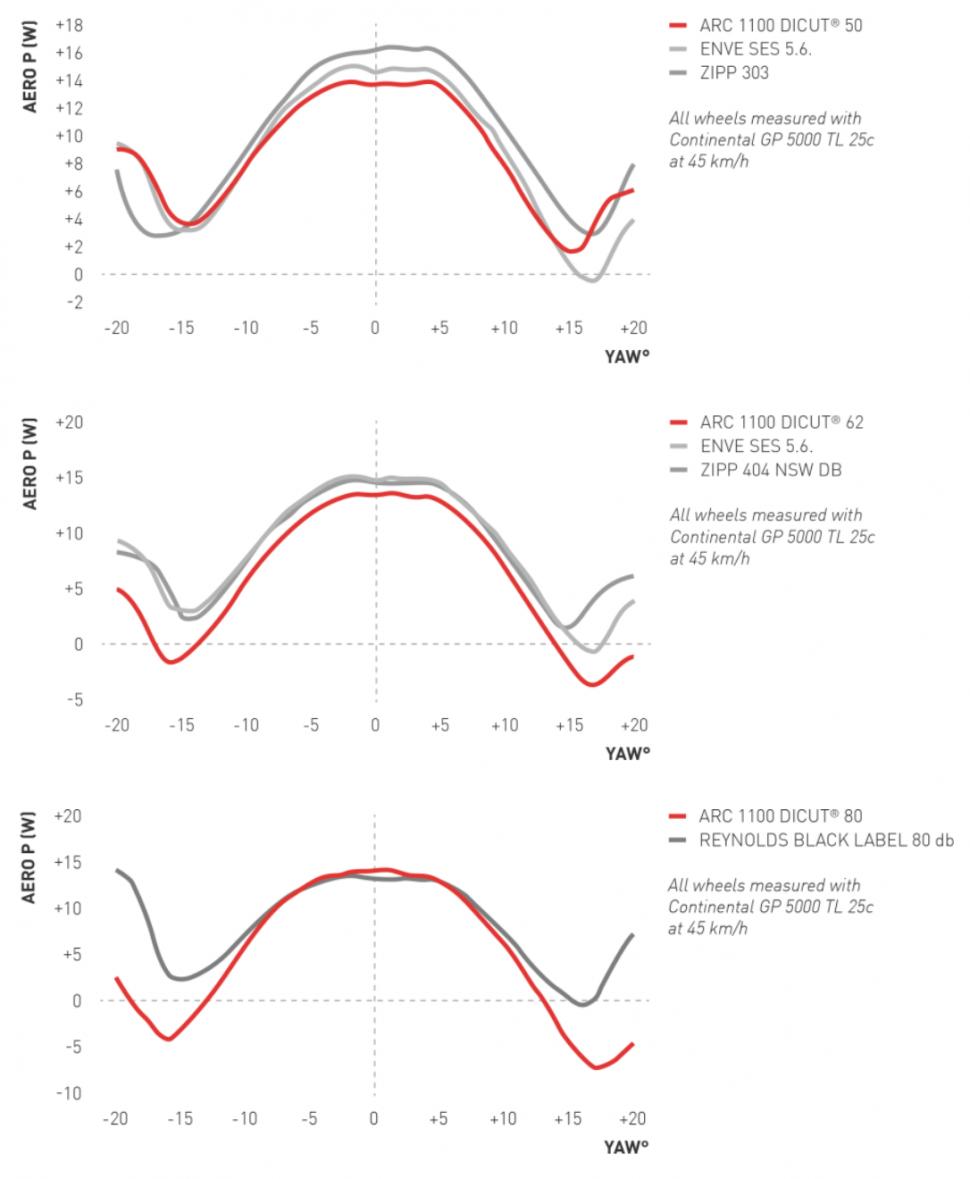 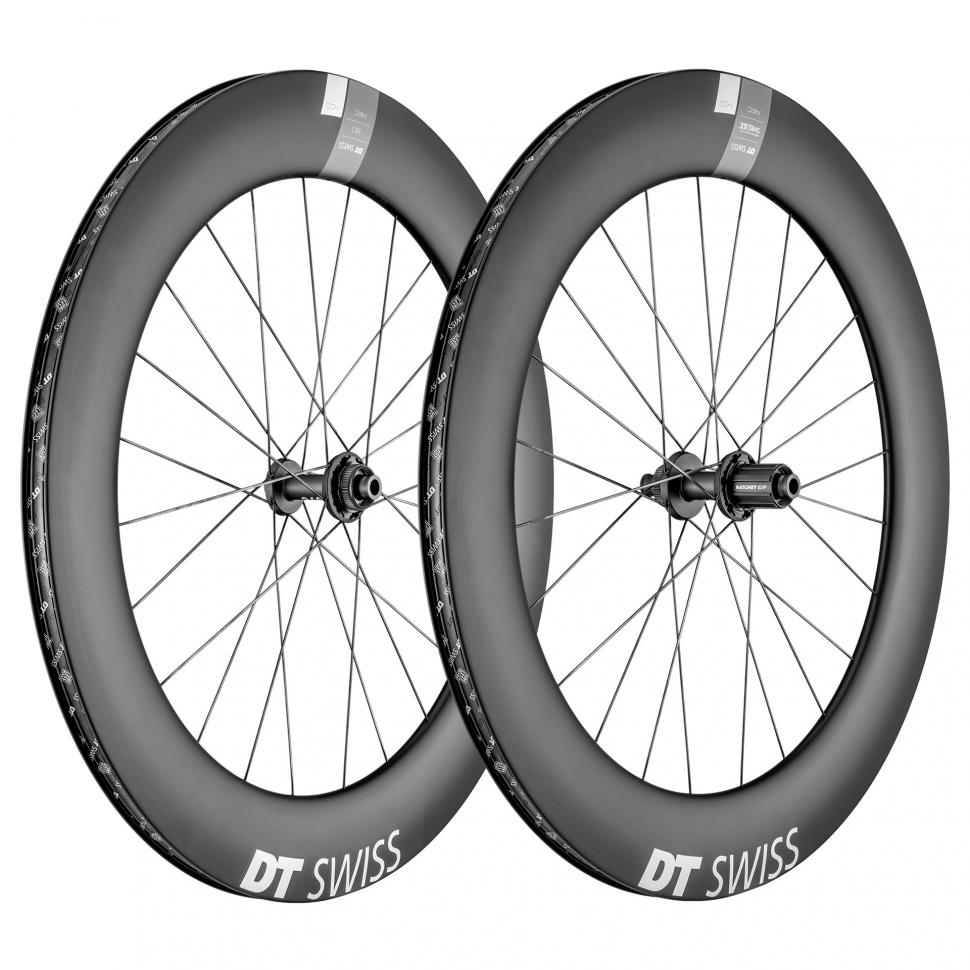 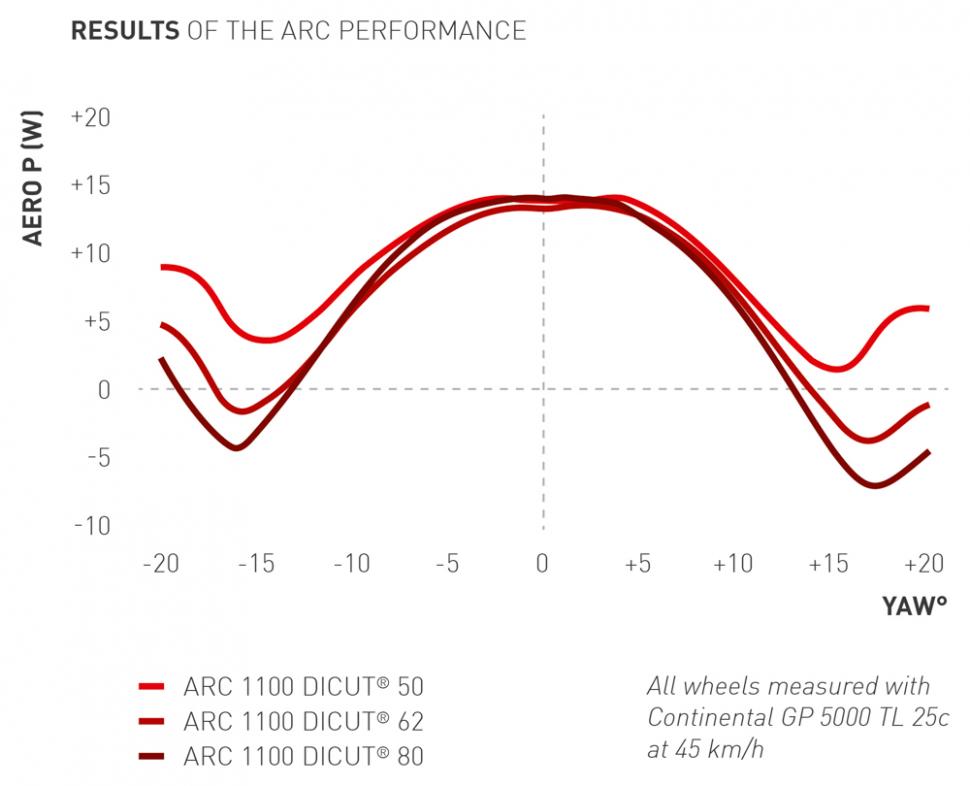 While DT Swiss claims that the ARC wheels are faster than those they tested against, the interesting figures come with the 62 and 80mm rims which at YAW angles of around 14º, DT Swiss claims, provide negative drag with their testing suggesting that the 80mm wheels -7 watts of drag which “pushes the cyclist forward.”

The outgoing ARC wheels centred around a rim that had a 17mm internal width. This has been boosted to 20mm in the new version, following the general trend that we’ve seen in aero race wheels for wider internal profiles. 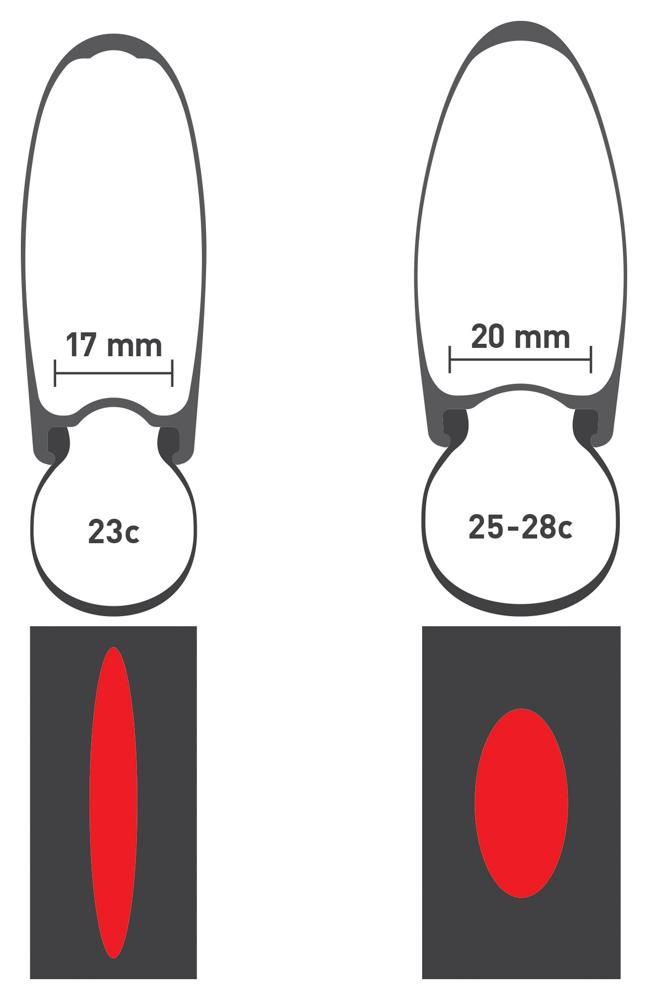 While DT Swiss previously said that the 17mm inner rim width was “proven to be the fastest”, the new rims feature a 20mm internal width to create a shorter tyre contact patch, which DT Swiss says lowers rolling resistance.

Adding 3mm to the rim’s internal width might not sound like much, but it has a massive impact on the profile of tyres with DT Swiss saying that thanks to the tyres added volume, “they have a broader contact patch and can be ridden with less air pressure without risking a pinch flat.”

The new wheels are tubeless-ready and use a hooked rim design, avoiding the maximum tyre pressure required on hookless rims. 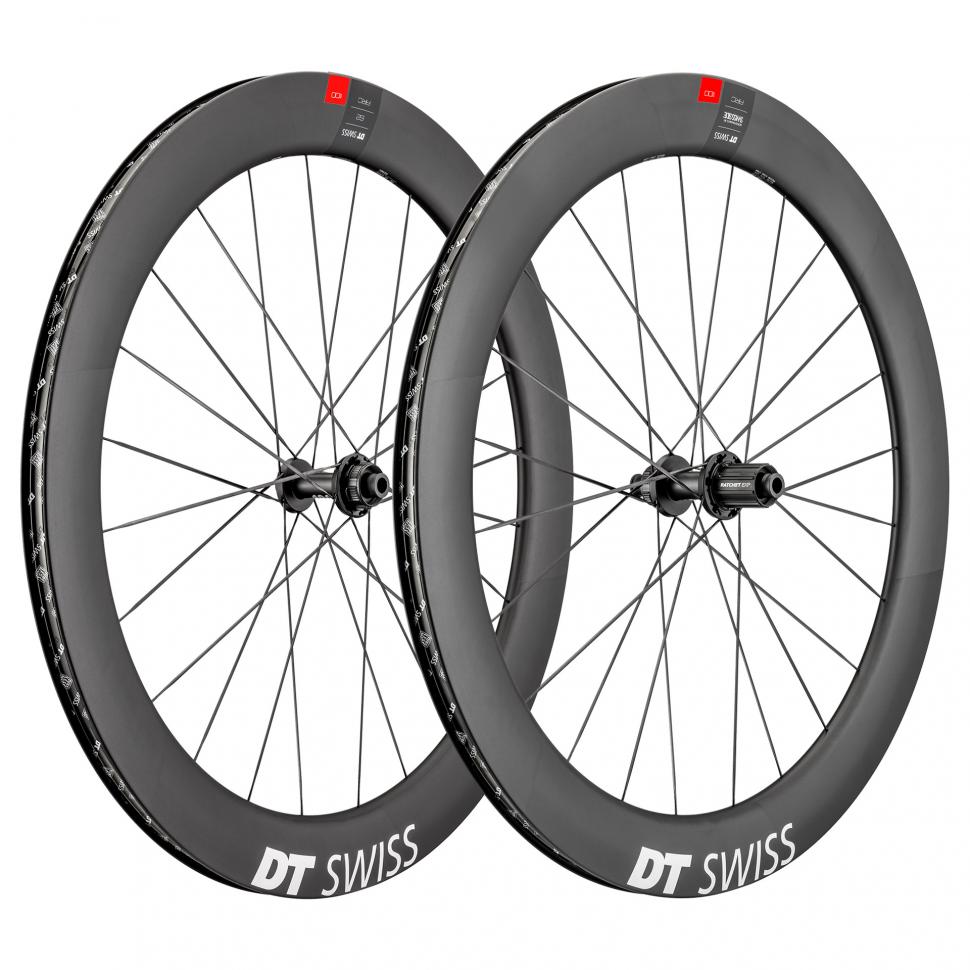 DT Swiss says that the spokes have also been given an aero redesign with the DT Aerolite and the DT Aero Comp contributing, DT Swiss claims, to a 1.1watt reduction of rotational drag on the 50mm wheel and a 0.8watt reduction for the 80mm. 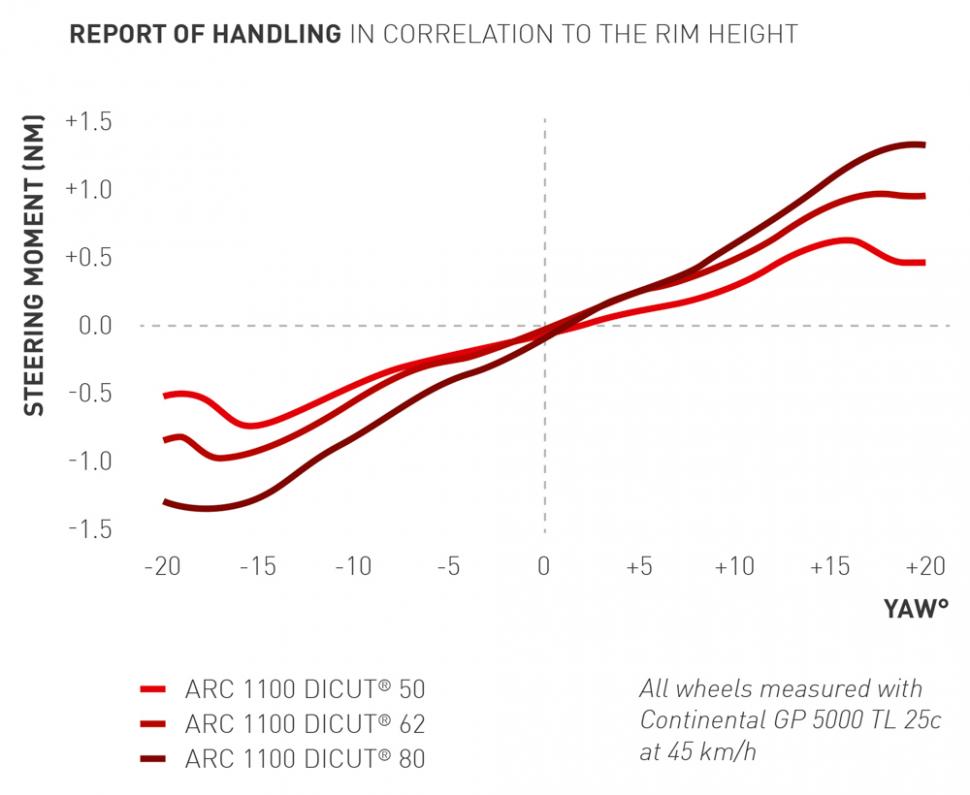 DT Swiss also has graphs which they say demonstrates the stability of the wheels in YAW angles between 0-20º. DT Swiss claims that the “ARC wheels remain stably controllable in the various yaw angles” which they say means that “the cyclist can stay longer in the faster aero position.”

Weight doesn’t seem to have been the focus of the redesign, but the claimed weights point to some small savings with some of the new wheels. Here are the claimed wheelset weights for the whole range:

The DRC range comprises two models of wheelsets, the 1400 and the 1100. Both are built using DT Swiss hubs, spokes and internal DT Swiss Pro Lock nipples, with the difference being found in the hub and spoke choice.

The range-topping 1100 wheels use a new DT Swiss 180 hub that features 2-in-1 spoke holes and smaller flanges, which DT Swiss claims makes the hubs more aero.

As with the previous version of the 180 hubs, ceramic bearings are used, with the build finished with a mixture of DT Swiss Aerolite and Aero Comp spokes. The new 180 hubs feature the Ratchet EXP system which we went into more detail about here.

The DT Swiss ARC 1400 range costs £ while the ARC 1100 wheels are £. There is a 650b size option for the 50mm rim depth on both the 1400 and 1100 models and all wheels come with a Shimano 11-speed freehub body as standard with Campagnolo and Sram XDR fittings available. Tubeless valves and tape are included. Availability is