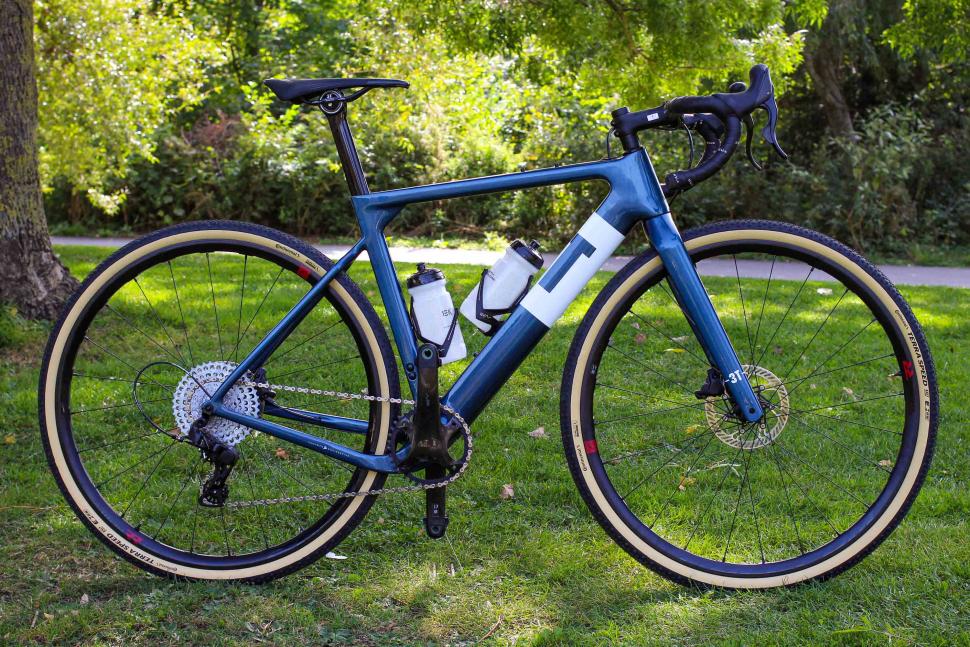 First there was 11-speed, then this became 12-speed. Now, Campagnolo has launched a 13-speed groupset for gravel bikes with an incredibly small 9-tooth cog in the wide range cassette that was designed specifically around the N3W freehub.

Matt Page has already been out riding the new Ekar groupset. You can find his first ride review right this way.

Ekar is Campagnolo’s first go at a gravel groupset, but they didn’t go in blind, claiming to have consulted with over 4,500 gravel riders and spoken individually to bike builders, riders, OEMs and more to ascertain the key features needed for the new groupset. Campagnolo says that this showed the following five factors to be top on the list of priorities. 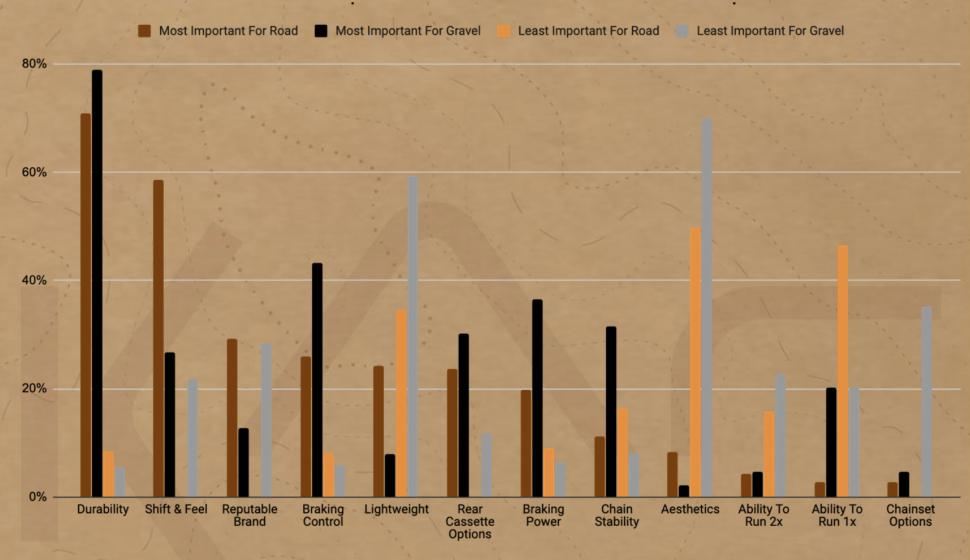 Even though weight didn’t make the top 5 priorities, it seems that Campagnolo couldn’t simply disregard it’s roadie roots and as a result, they claim to have made the lightest 1X gravel groupset on the market.

Campagnolo is claiming a system weight with a 9-36T cassette of 2.385kg. This, they claim, compares well to a SRAM Force 1X 11-speed groupset with a 10-42T that they say weighs in at 2.471kg, though the size difference in the cassettes could well be skewing this weight saving claim.

The new groupset comes with the following price tags:

While you can buy the parts individually, there won’t be much point as cross-compatibility with other gravel components is non-existent. To save you doing the sums, this all adds up to £1447. That makes it more expensive than the mechanical offerings from Shimano and SRAM, but cheaper than their electronic groupsets. That’s the groupset in a nutshell, now onto some specifics. 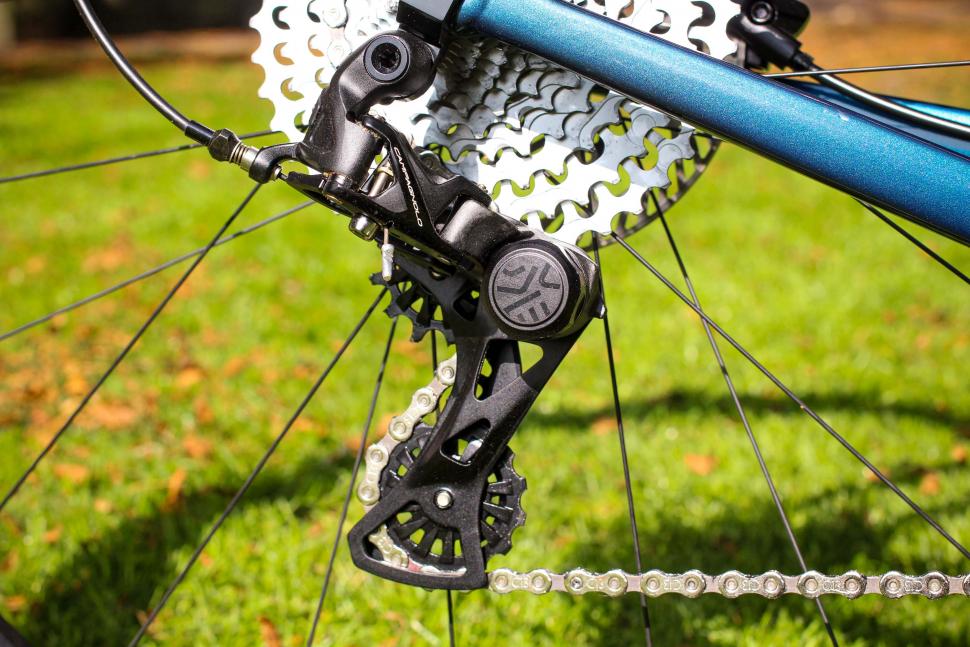 1X systems can benefit from having a clutch system in the rear derailleur. It’s a feature that we’ve seen on pretty much every 1X drivetrain and it’s one that can be found inside the Ekar derailleur. A clutch is used to add tension to the chain when it isn’t being shifted. This keeps it from bouncing around quite so badly, with the goal being to keep the chain on the single chainring.

Campagnolo also uses “2D Parallelogram”, a feature that is designed to aid shifting as the chain goes from making small jumps between the high gears, to the larger jumps found in the lower gears. Campagnolo claims that this allows the jockey wheels to follow the curve of the cassette rather than moving in a linear motion as is usually the case. 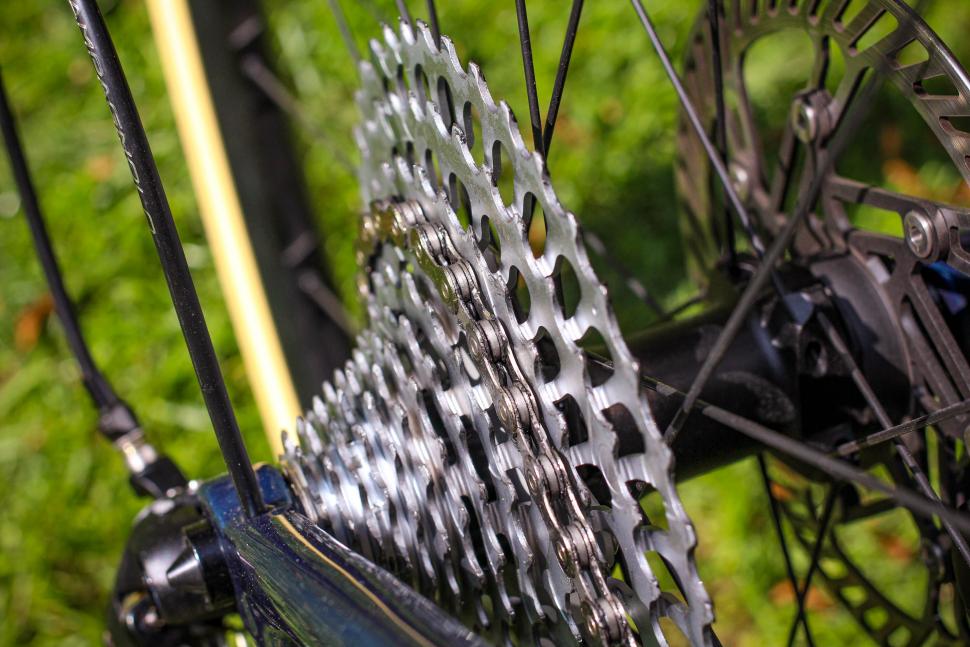 The new cassette features a tiny 9T cog, an unusually small gear even in the mountain bike world. Currently, Campagnolo is offering the Ekar cassette in 9-36, 9-42 and 10-44.

Campagnolo says that the 9T cog has been used to make the groupset suitable for all-road riding.

The 9-42T cassette that we have in for testing uses single-tooth jumps from the 9T cog to the 16T cog. The gaps then increase from 18-21-25-30-36-42. This provides a range of a whopping 466%, though Campagnolo has had to use some very pronounced ramps and tooth shapes to aid shifting.

To allow such a small cog, Campagnolo developed a new freehub body, the N3W. We first heard about the N3W freehub body back in July and while Campagnolo wouldn’t confirm their gravel intentions back then, the signs were pretty clear that the fitting of a tiny cog was on the cards. 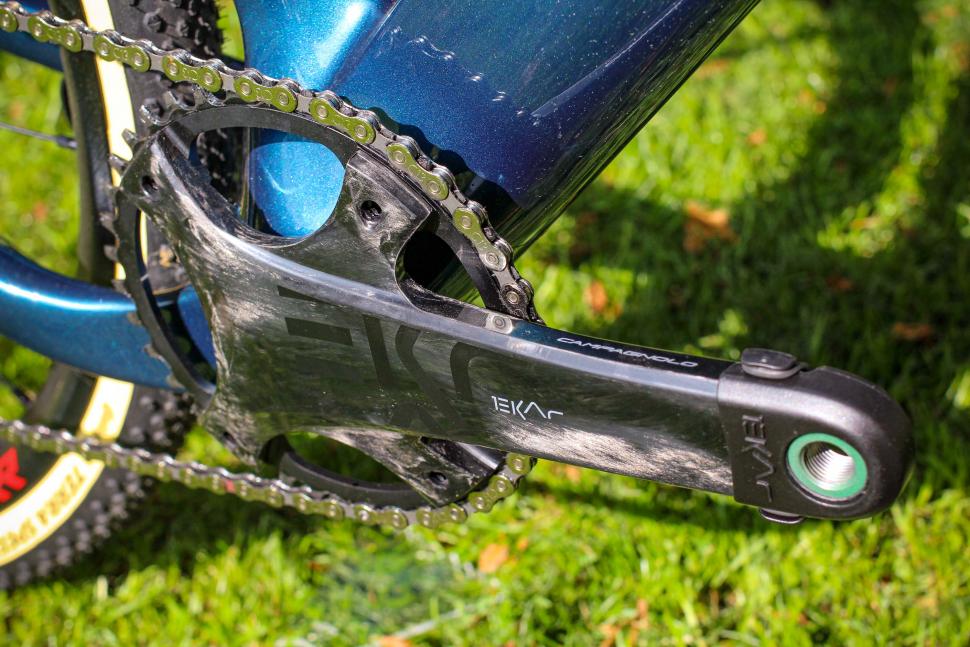 Campagnolo’s 2-piece crankset turns on an alloy axle that is bonded to a polyamide-carbon spider. The crank arms are made using UD carbon and while not pictured in the press release photos, ours has come in with a bash guard on the end of the arm to protect against rock strikes.

Coming in at a claimed 615g with 175mm arms and a 38T chainring, the new crankset is certainly not a heavy piece of kit.

The crankset also has a slightly narrower Q-factor than the equivalent Shimano GRX crankset. The Ekar measures 145.5mm with GRX is 151mm. For riders that are used to road cranks, this narrowness will feel nicely familiar, but it may well come with some clearance concessions.

That said, wider Q-factors are often only required where larger chainrings are needed. The 9T cog means that this isn’t the case here, though it will be interesting to see which bikes can use the new Ekar groupset as some are specifically designed with wider Q-factors in mind. 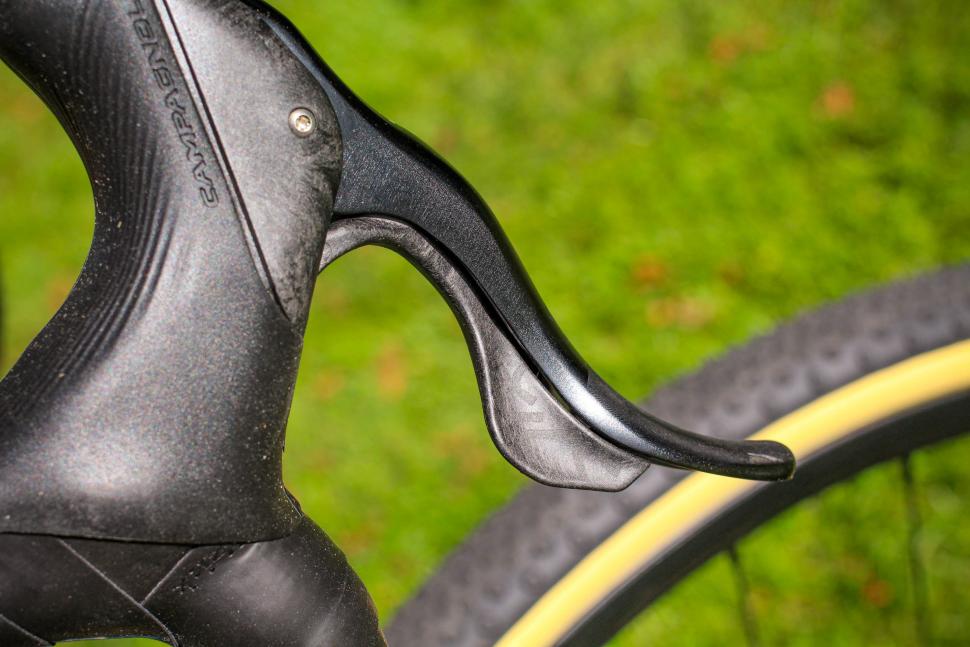 Take a quick glance at the shifters and you’d be forgiven for thinking that they’d come straight from one of Campagnolo’s road groupsets. The big change, apart from the 1X-specific setup, comes at the thumb paddle. 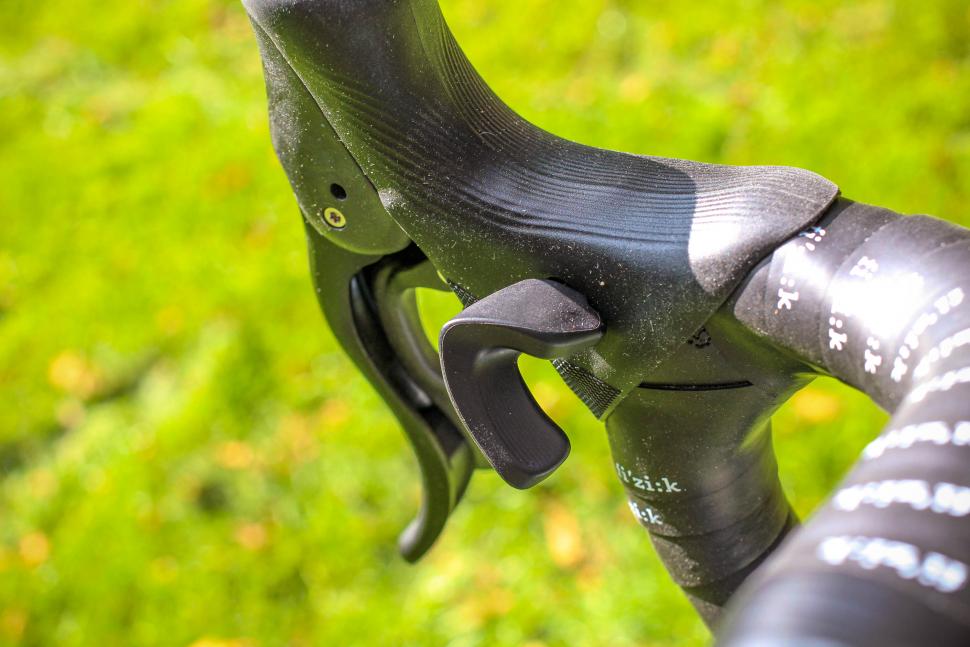 This J-shaped paddle is called Lever 3 and has been designed to make shifting easier from the drops. Apart from this new lever shape, you'll find Campagnolo's familiar 3-gear up-shift for those times when you rapidly need to dump some gears. 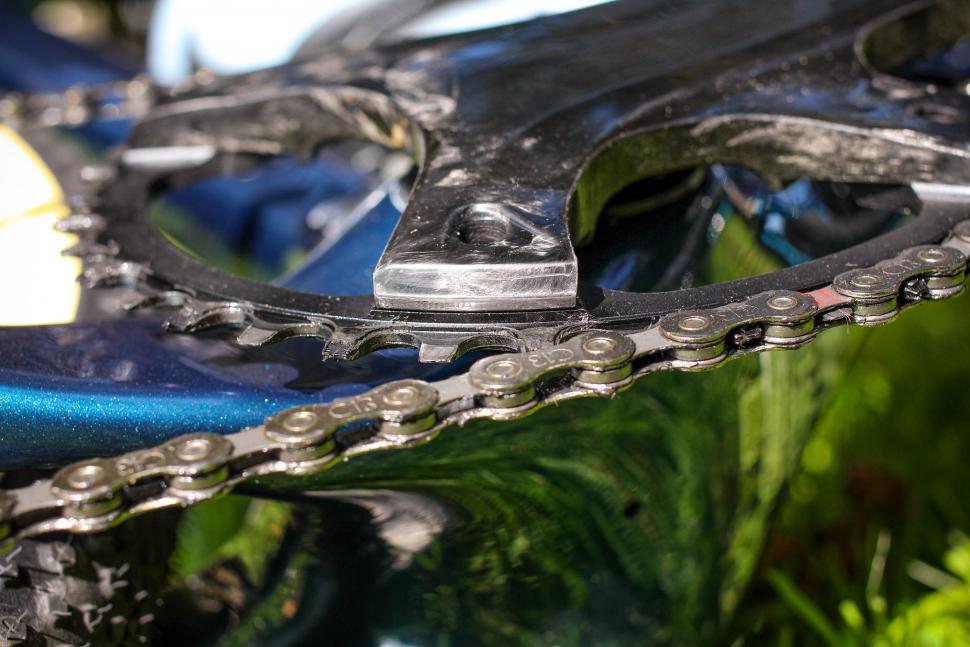 “Despite being our narrowest ever chain it’s also strong, light, durable and amazingly effective.”

That’s what Campagnolo are saying about the new Ekar chain. Only a good amount of testing will tell if such a narrow chain can stand up to the abuse of gravel riding, but Campagnolo syays that the Nickel-Teflon treated C13 chain “is designed specifically to work efficiently and securely” so we’re hoping for hassle-free riding. 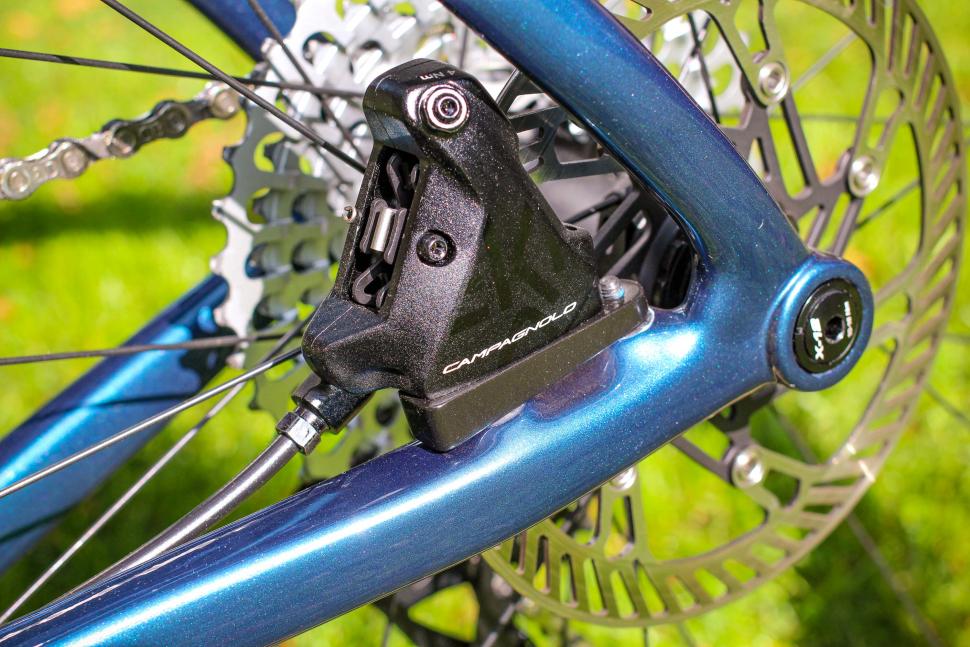 The Ekar brakes, Campagnolo says, take the technology of their existing hydraulic brakes to give “trusted modulation and progressive feel.” It seems that little has changed, bar some aesthetic alterations, from the brand’s road hydraulic brakes and the callipers can still be used with either 140mm or 160mm rotors.

We already have the Ekar groupset out in the wild for testing. Matt Page will have a full written review soon, but for now, you can read his initial thoughts here.