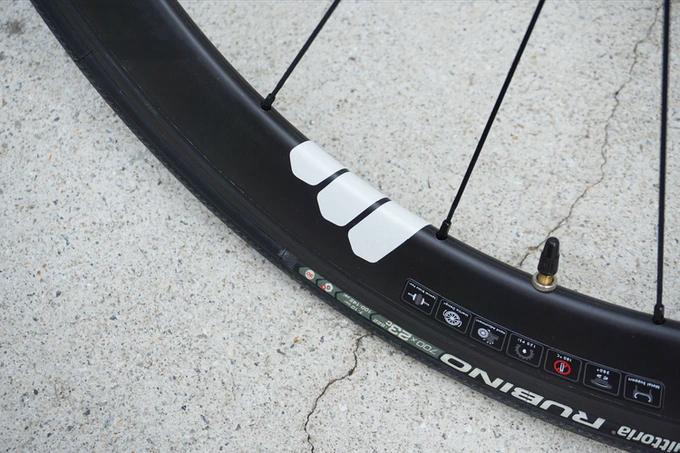 From the makers of the “first self–blinking super bright cycling reflector” that hangs on the saddle or any bags attached with the included universal string, comes Blincc’s Hex. The Singapore brand has raised over £6000 on Kickstarter for its 360 degree reflective tape that provides 360 degree visibility and is designed to fit virtually any bike. This isn't the first sticky reflective solution for your bike and its components that we've seen, with Flectr's Zero Aero Wheel Reflectors receiving a good review but mixed reception on road.cc back in 2017. Blincc says its solution is made from super thin 3M material, is lightweight and offers all-round visibility.

> 18 of the best cycling reflectives — get seen after dark

The brand claims its reflective decals are also super durable thanks to the included “enhanced protective layer” that shields it from dust, gravel, debris, and more.

Looking to stick some on your helmet? The tape seems to easily follow the contours often found in helmets. For those who like mix rides up with muckier off-road sections, Blincc says the Hex is easy to wipe clean too.

The Hex packs include a mix of smaller pieces that measure 51 x 18 mm and bigger pieces that are 94 x 18mm. The former weighs just 0.3 grams and the latter 0.6 grams.

If these sizes don’t quite work for you, each piece can also be trimmed to fit smaller areas, says Blincc.

The Singapore brand is already known for its simple but effective cycling visibility solutions. Blincc Cycling’s first Kickstarter campaign raised a total of 450% of its original target for its under-the-saddle reflector that blinks without using batteries. Now, they've stepped things up to 360 degree coverage. So yep, it is just reflective tape that you can buy in packs that’s designed to cover and fit most areas of your bike for visibility from all angles. Simple and effective, and it’s not too pricey either…

Starting at around £6, a Single Hex pack consists of 12 Short and 4 Long Hex’s for two rims, the fork and seatstay. Fork out about £12 and you’ll also get enough to cover your cranks and helmet too.

Blincc Cycling says that it expects the shipment process to start on 4 December 2021. If like Blincc you happen to be from Singapore and end up backing, just be sure to show your Hex reflectors off in a group of five riders or less...

You can find and back Blincc’s Hex on its Kickstarter page over here.