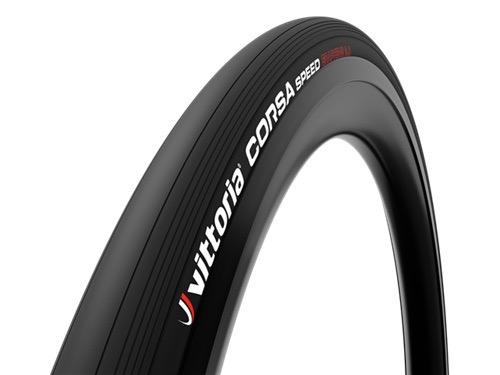 Wheel brand takes new models from Continental, Schwalbe and Vittoria to the wind tunnel to find out which is fastest
by Mat Brett

Parcours has been into the wind tunnel to test the aerodynamics of the latest generation of tyres, and the results make interesting reading.

Parcours first undertook wind tunnel testing a year ago with various tyres fitted to its own Chrono 77mm tubeless-ready front wheel with a 20mm internal width. However, several tyre manufacturers have released new models or updated their range since then, so Parcours conducted more testing in the A2 Wind Tunnel, Mooresville, North Carolina, USA in October 2019  (you can check out the test protocol here).

The new tyres tested were:

Here are the drag results from both of Parcours' visits to the wind tunnel. 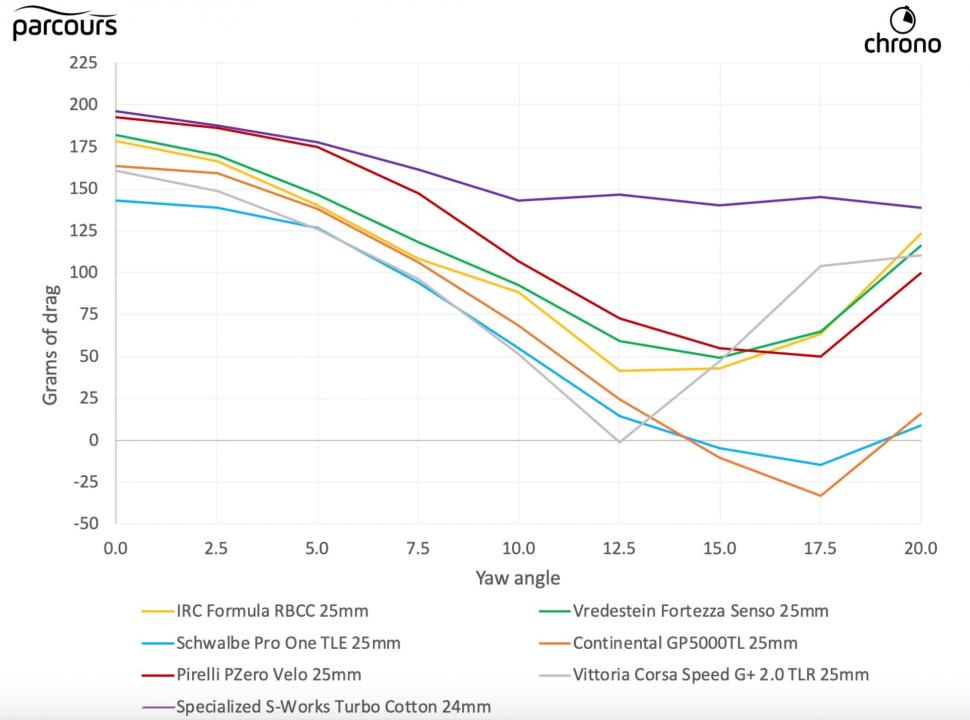 Parcours uses a weighted average in order to calculate a single aero drag figure for each tyre. In other words, it doesn't treat data from each yaw angle from 0° to 20° equally.

"Rather than taking a simple average for each wheel, we have given a higher weighting to the
more commonly occurring yaw angles to more accurately reflect the real world. As a result,
the [results] reflect a weighted average yaw angle of 6-7 degrees.

Parcours then combined the aero drag figures of the tyres tested with rolling resistance data from Bicycle Rolling Resistance for an overall 'fastest tyre' comparison (factors like grip and puncture resistance were not considered).

Here's a table of the results (with figures converted to the power/watts needed to overcome the drag and rolling resistance). 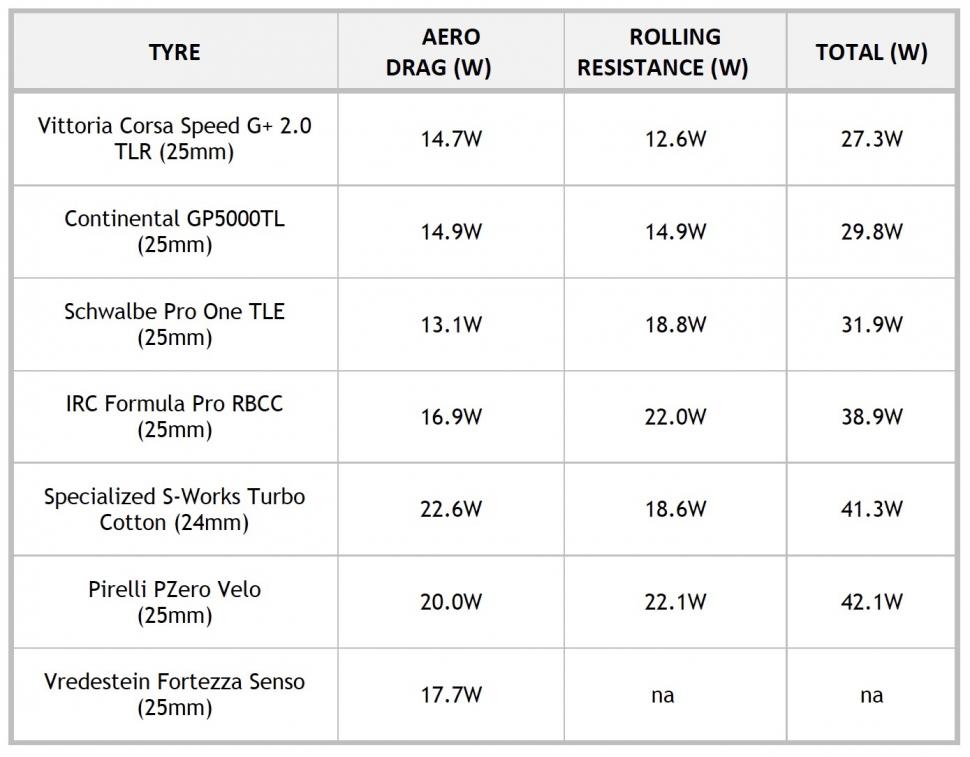 The aero drag is shown at 30mph (48km/h) while the rolling resistance of the tyres is shown at 100psi and has been adjusted to 30mph. Parcours has chosen 100psi for consistency with previous tests.

"However, using rolling resistance figures at a more-realistic 80psi (as per our recommended inflation levels for a 25mm tyre on the Chrono front wheel) does not impact the rankings," says Parcours. "The overall deficit to the leading tyre is however reduced in each case by between 5 and 15%." According to these results, the three highest performing tyres in terms of aerodynamic drag and overall (aero drag + rolling resistance) have all been released in the past 12 months.

"Older model tyres (tested in 2018) would inflate to 10-12% wider than their stated width when fitted to our Chrono front wheel (internal rim width 20mm)," says Parcours. "However, the newer 2019 tyres would only increase by less than 5% versus stated width. Given the reduction in frontal area, this likely had an impact on aerodynamic performance."

We've no way of knowing whether the ranking of the tyres, in terms of their aero drag, would change if they were mounted to different rims.

Parcours notes that the Schwalbe Pro One TLE and the Pirelli PZero Velo each have a lower rolling resistance than the tyres from those brands that were taken to the wind tunnel, but that these models were not available for testing.

Jumping backwards in time to the 2018 testing, Parcours said, "An open tubular tyre (often based
around a cotton casing with a rubber tread attached to the outside) gives rise to a significant aerodynamic penalty when taken across a weighted average yaw sweep... The major driver of this is the far lower yaw angle (7.5° vs. 12.5°) at which the tyre stalls.

"Initial research suggests that the construction of an open tubular tyre, with the small 'lip' at the point where the edge of the tyre tread sits on a cotton casing, will trip the airflow running across the tyre in a higher yaw angle scenario, causing an increase in drag.

"Meanwhile, there is clearly a factor reducing drag for a textured tyre tread versus a smoother equivalent. We believe this may be attributable to the textured tread acting as a vortex generator on a micro scale. By maintaining a smoother airflow across the tyre and rim, this reduces turbulence and hence drag."

Head over to the Parcours website for more info on this aero testing and to see the full wheel range.