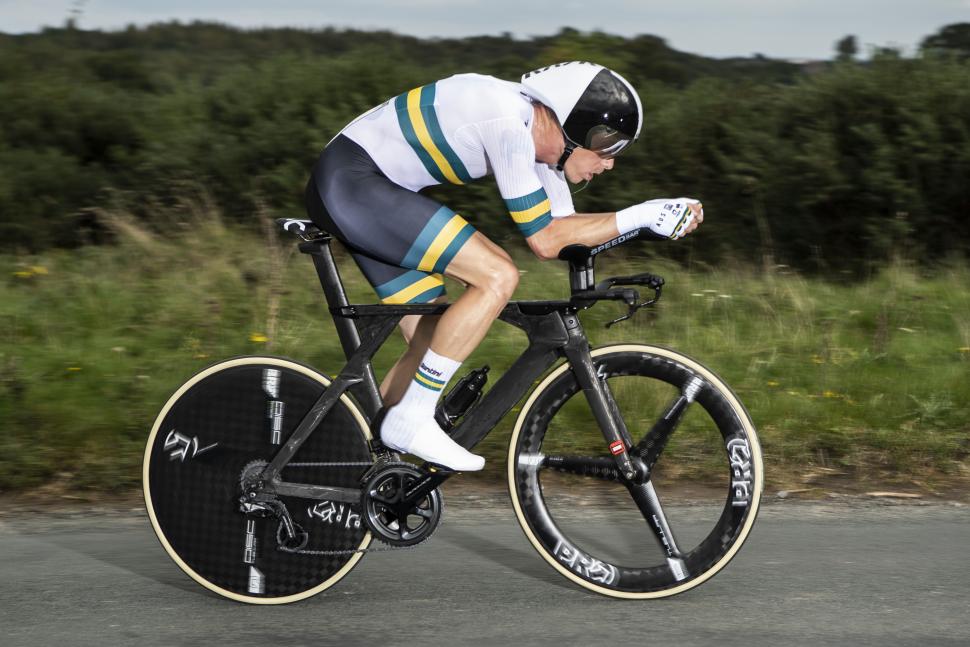 What’s going on with Rohan Dennis and his bike choice at the World Championships (and his helmet too)?

He rides a BMC, not a Merida TT bike, to claim World TT title
by David Arthur @davearthur

Rohan Dennis has not been spotted since mysteriously walking away from the Tour de France before the time trial stage he was a hot favourite to win this summer, but yesterday he stormed to victory in the UCI Road Time Trial championships. Only he was riding a BMC, not a sponsor-correct Merida, and a Kask helmet instead of a Rudy Project – a fact much discussed on social media and in yesterday's road.cc Live Blog.

Clearly Dennis has been training hard since July but it’s his choice of bike that has got the internet full of speculation and rumour. With a few exceptions (Team GB), when professional riders swap trade team jerseys for national jerseys, they also use the bike and kit supplied by their trade team.

Dennis, as far as we know, still rides for Bahrain Merid, which means he should have been riding a Merida Reacto Time Warp TT bike with Fulcrum wheels and a Rudy Project helmet, just like we checked out at the Tour de France.

In fact, he won the world time trial title on a BMC Timemachine with Pro wheels and Kask helmet– the same BMC he used to ride when he rode for the professional team sponsored by the Swiss brand, and which he rode to win last year’s title.

The frame had all the brand stickers removed, clearly an attempt to keep the bike swap hush-hush, but there is no fooling armchair experts. Even BMC celebrated Rohan’s win on Instagram.

What’s the hell is going on? Following his spectacular walkout at the Tour, speculation has focused on his apparent dissatisfaction with his sponsored equipment, in particular his TT kit. Orla Chennaoui tweeted at the time: “Understand this morning that the issue between Rohan Dennis and Bahrain Merida was indeed down to a falling out over TT kit."

Rumours, therefore, focused on him not being happy with his time trial bike, a Merida Time Warp TT. His choice of a BMC Timemachine would support this rumour.

Speaking to cyclingnews.com, Dennis said he chose the best equipment decided by his national team, Australia.

“The national team deemed it was the best equipment for me and my body position, and the best equipment for me to get the result I need to get here. I’ve literally just done testing leading into this. It’s all been a mash-up over… probably since I’ve been in the national team, which I’ve been in every year since I was a junior in 2007. Since then we’ve started finding out information about what’s best for me,” he said.

Asked if the bike choice was in fact due to tensions with his current employer, Bahrain-Merida, he said “Not at all. National team trumps trade team.” 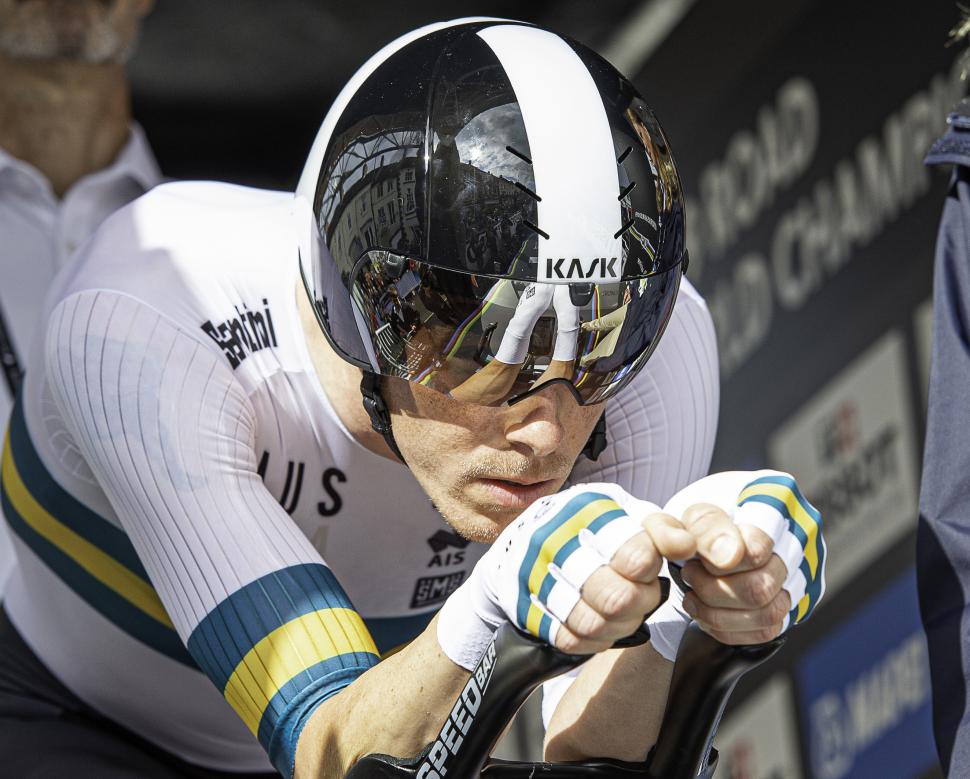 Top UK time trialist Michael Hutchinson points to the helmet being the issue, not the bike. The Bahrain Merida team used Rudy Project helmets, but Rohan used a Kask helmet, the choice of Team Ineos.

“In case you thought Dennis was tapping his head as he crossed the line to suggest some a superior time trialling brain, he was pointing at his helmet – helmets were at the centre of the Tour de France blow up. Today he wore a Kask – team supplier is Rudy Project,” said Michael in a tweet.

We know some pro riders can be very fussy about bikes and equipment. We used to see a lot of pros riding frames and components from other brands, with the logos either removed or taped over to conceal their true identity. These days it’s a lot less common, partly because many equipment sponsors have raised their game and make a full range of products for pros to choose from. It still happens from time to time but is typically the reserve of the higher paid riders who have more influence on what they ride. 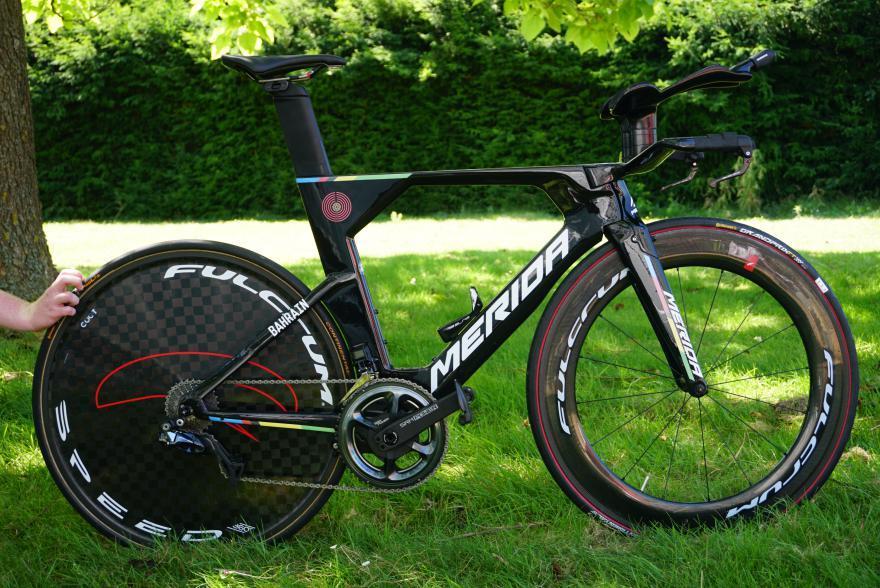 The Merida Warp TT bike that Rohan Dennis should have been riding?

Bike brands pay big money to sponsor a team and also supply a fair amount of equipment. These brands are also investing a lot of money in development, and aerodynamics is an expensive area when it comes to time trial bikes, helmets and clothing. They are sponsoring the teams and top riders because they want the publicity and the validation that comes from a win at a big race. The right victory can sell a lot of bikes and components/accessories.

But do sponsorship deals go out of the window at world championship or Olympic events? We've seen Team GB using its own designed carbon bikes in London 2012, where Mark Cavendish and Bradley Wiggins didn't ride their trade team bikes, instead using bikes based loosely on the development on the track with the likes of Sir Chris Hoy and Chris Boardman.

Strangely, there has been no public explanation of Rohan’s still mysterious withdrawal from the Tour de France. Clearly it's all speculation at the moment; no one outside of Rohan and the Bahrain Merida camp knows the real reasons behind his apparent dissatisfaction with his pro team equipment. Hopefully, the truth will come out soon.