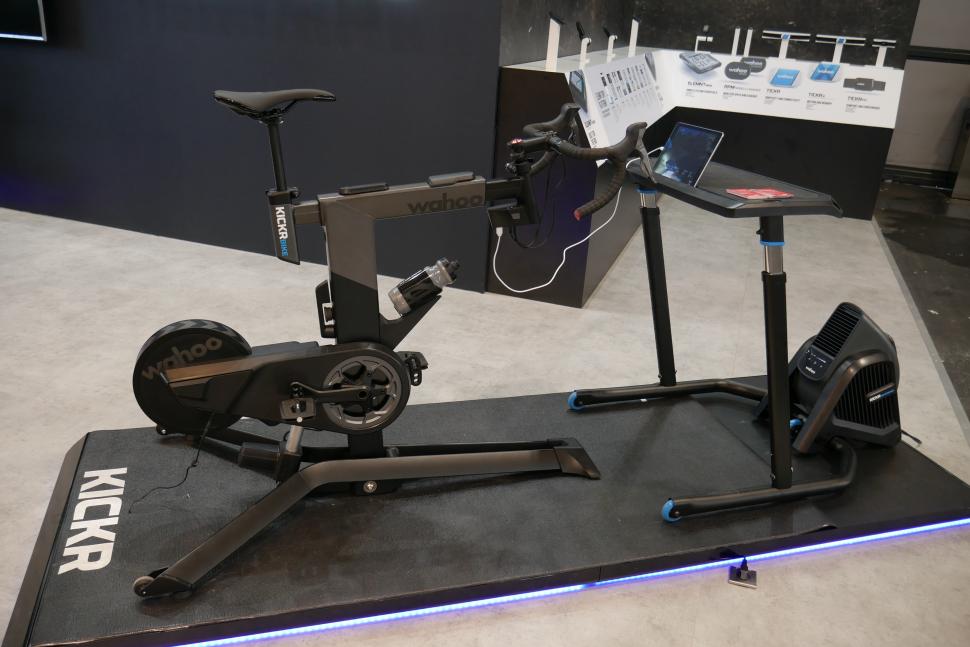 The theme of EuroBike this years seems to be indoor cycling and there has been a number of new smart turbo trainers and indoor bikes released at the show.

We went in search of everything that is new... 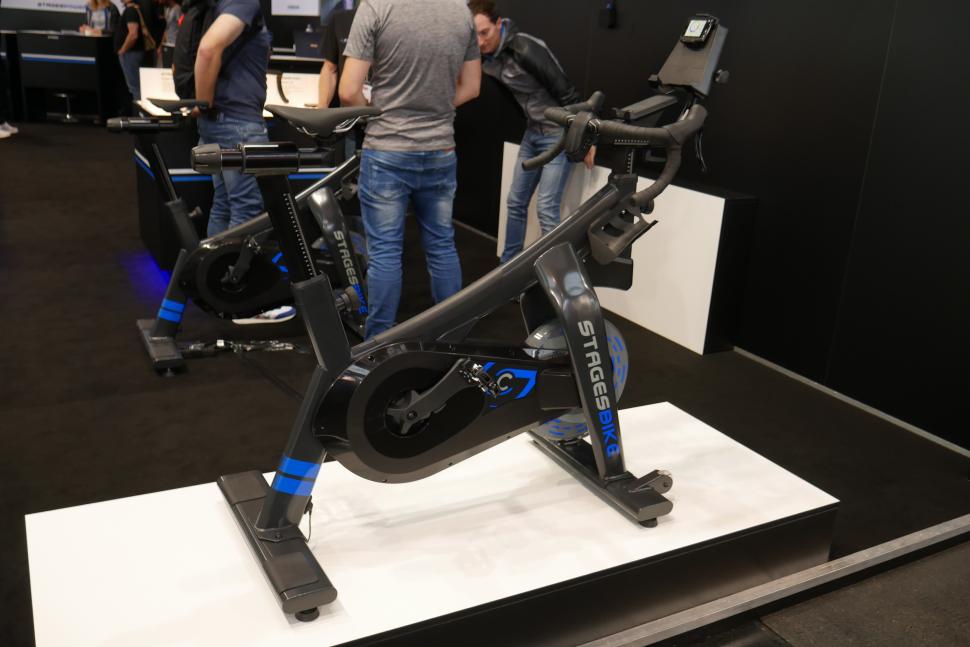 Well-known for their power meters, Stages has jumped right into the indoor bike market with this, the Stages Bike.

The Stages Bike is a progression of their growing line of indoor spin bikes, a segment of the training market that they are really pushing into. There's lots of micro-adjustability here, plus crank length can be set to 165, 170, 172.5, or 175mm. You also get dual-sided data from Stages G3 power meter. The system is driven by a Gates Carbon belt drive, with electronic resistance of up to 3,000 watts at 120rpm.

The programmable electronic shifting, braking and steering mean that it should handle any future app developments while also allowing riders to programme the shift buttons and add TT shifters. 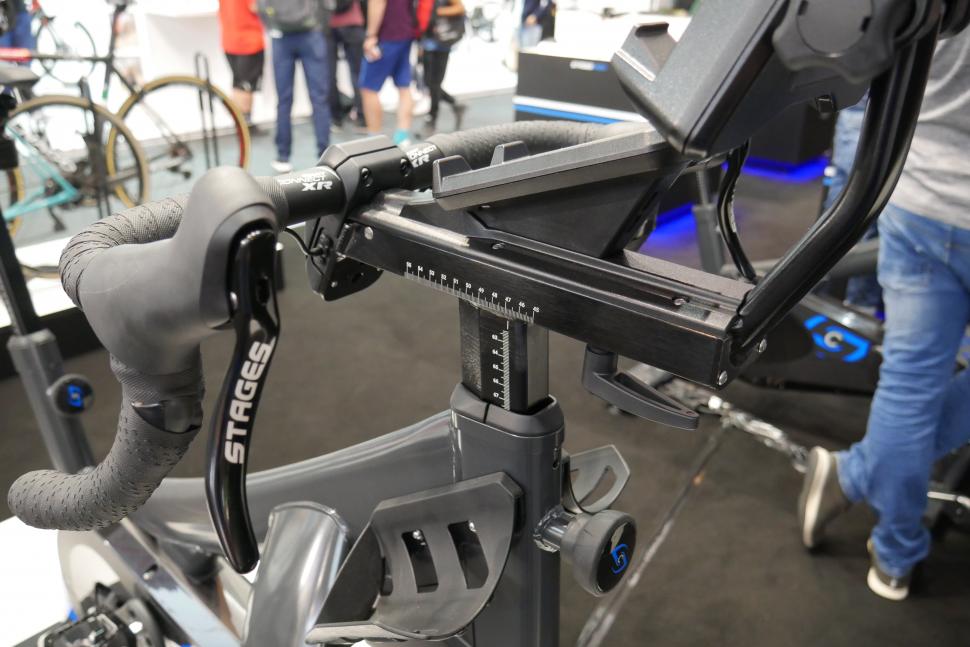 We might be waiting a while before we get one in on test. 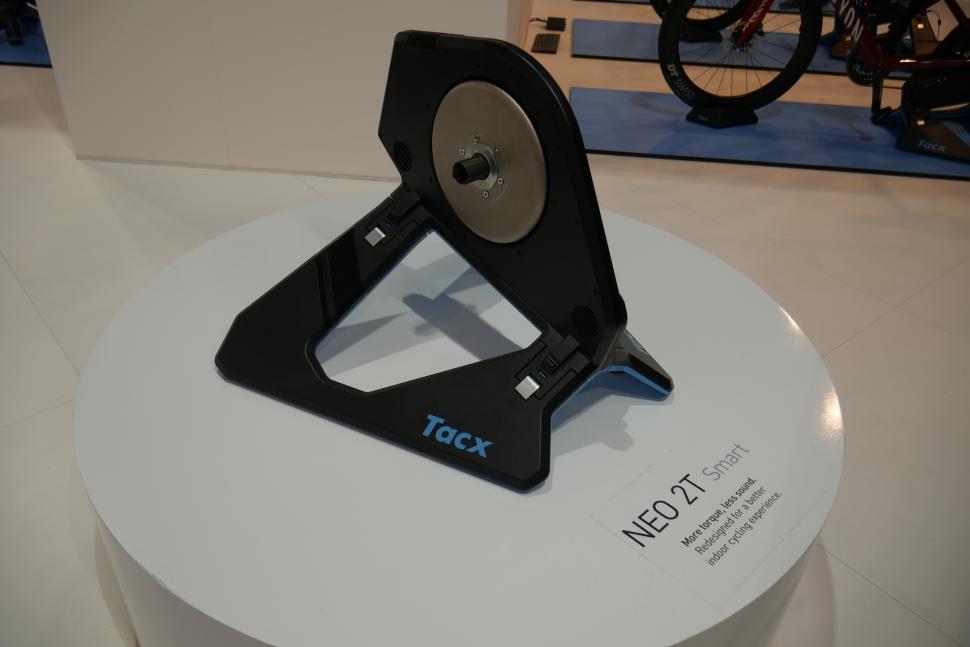 An update on the brilliant Neo 2. This Neo 2T is quieter and more powerful, with a max resistance of 2,200w at 40kph, max slope of 25%, and a max torque of 85Nm giving you plenty of resistance for big efforts.

Power is measured to within 1%, giving accurate data with dual-sided pedal stroke analysis.

Wandering around the halls of EuroBike sometimes presents a gem of a product.

The VirtuPro isn't the prettiest indoor bike we've ever seen, but their software was really rather interesting. Their as-yet-unreleased software reminded us of ProCycling Manager, but instead of just sending your riders on the attack, you actually have to pedal.

The drafting simulation is very impressive, giving a much more realistic feel of bunch riding. And unlike Zwift, you can't ride through other avatars, you'll need to steer around them to make your way to the front of the bunch. It's not enough to just get on an indoor trainer these days and mindlessly churn out the watts, you actually need to pay attention!

From what we saw on the Zwift stand, the sensitivity is pretty good and there's no lag.

How useful is this? We're not too sure. We'll go and have a go on it tomorrow. 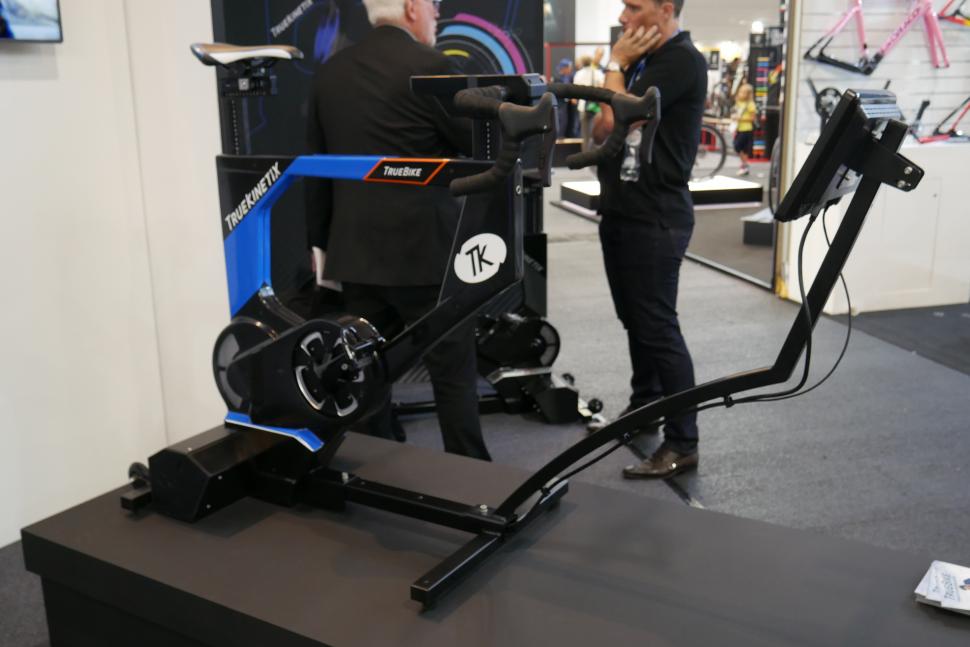 The TrueKinetix TrueBike trainer is designed to make indoor cycling easier by creating the same muscle loads as outdoors. As a result, the stress on the muscles in the dead point disappears completely, like on the road.

TrueKinetix’s main selling point is the TrueBike’s ability to exactly mimic the pedal forces of outdoor cycling. This, they say, allows the rider to increase their power output by 20 to 30%.

All of this should mean that you can get a better workout, avoiding the difference in power values between on-road and trainer efforts. 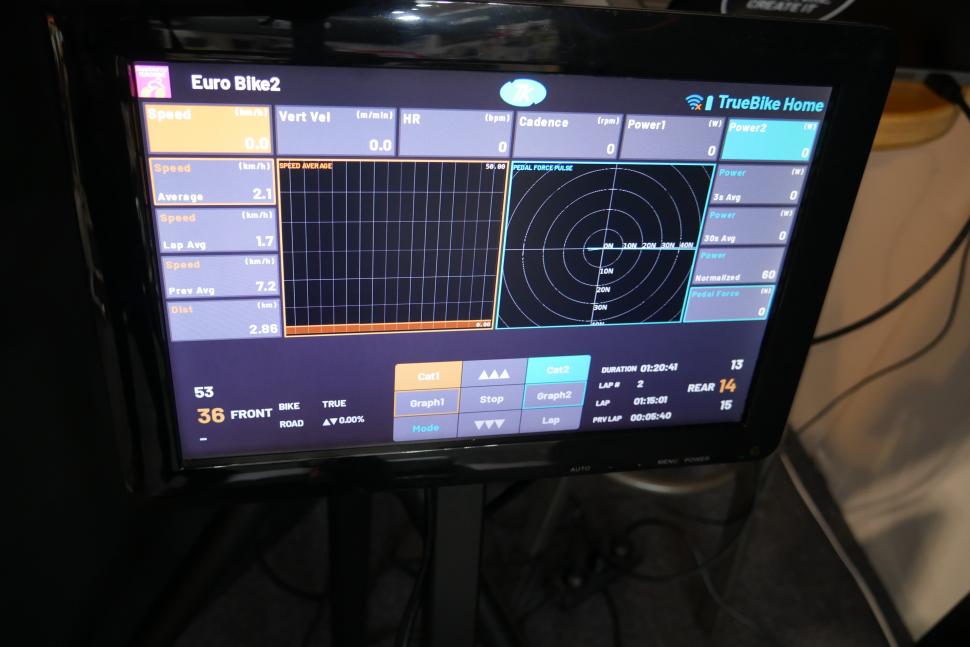 Walking up to the Fliiiight, you'd be forgiven for thinking that this was just another wheel-driven trainer. Get closer, though, and you'll notice that there seems to be no resistance unit. Magic!

The resistance is delivered by two magnets, the things that look like giant brake pads. They offer silent resistance, a lightweight design, and zero tyre wear. 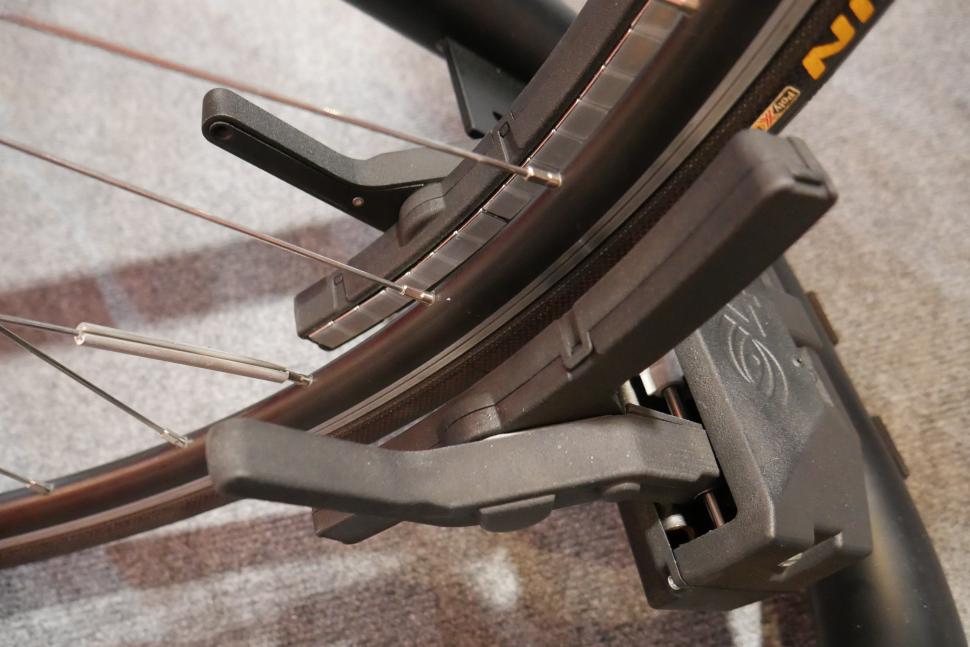 It's fully controllable by 3rd party training apps and can run on the internal battery for around six hours.

Currently, due to the laws of physics, you will need to use an aluminium rear wheel, though these are readily available and 4iiii tell me that they're in conversion with wheel suppliers to offer a basic rear wheel for a small additional cost. 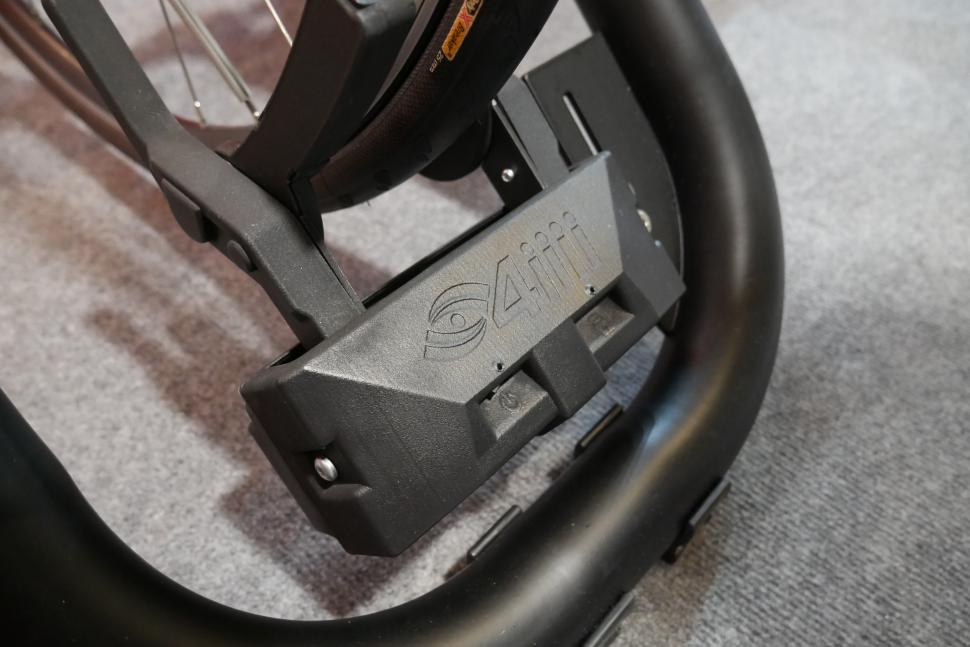 We'll be keeping an eye on the October release date for UK pricing, though an initial $599 USD price point makes this a very interesting smart trainer. The one that everyone is talking about.

Wahoo's Kickr Bike is full of inventive tech features, like the ability to photograph your bike and get identical measurements on the Kickr Bike. 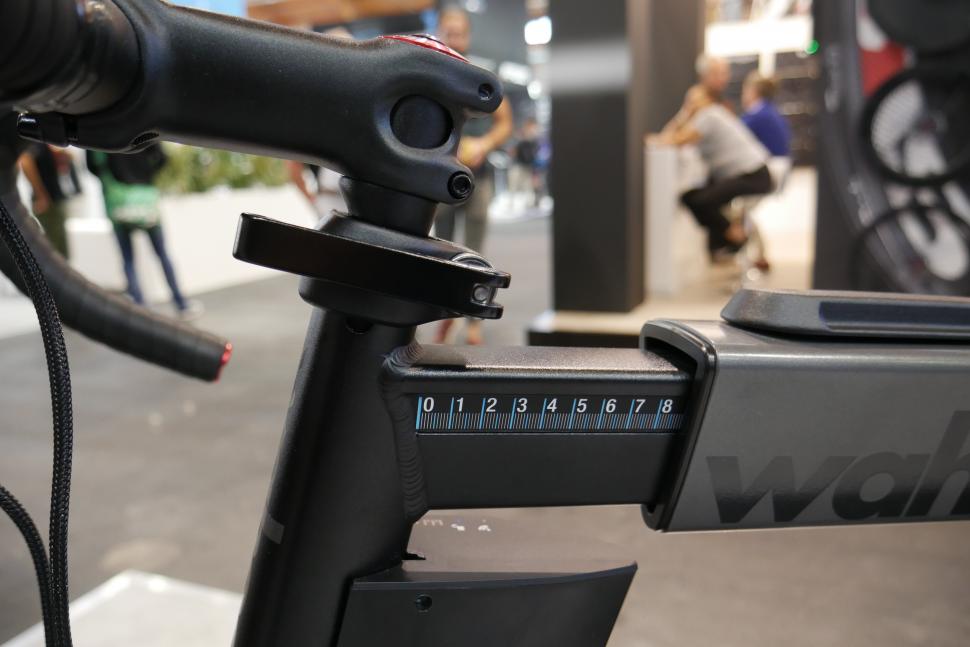 Jack took an in-depth look here and we'll also be getting our hands on one for testing as soon as possible.

The crazy $3,499 USD price point might make your mind up now. 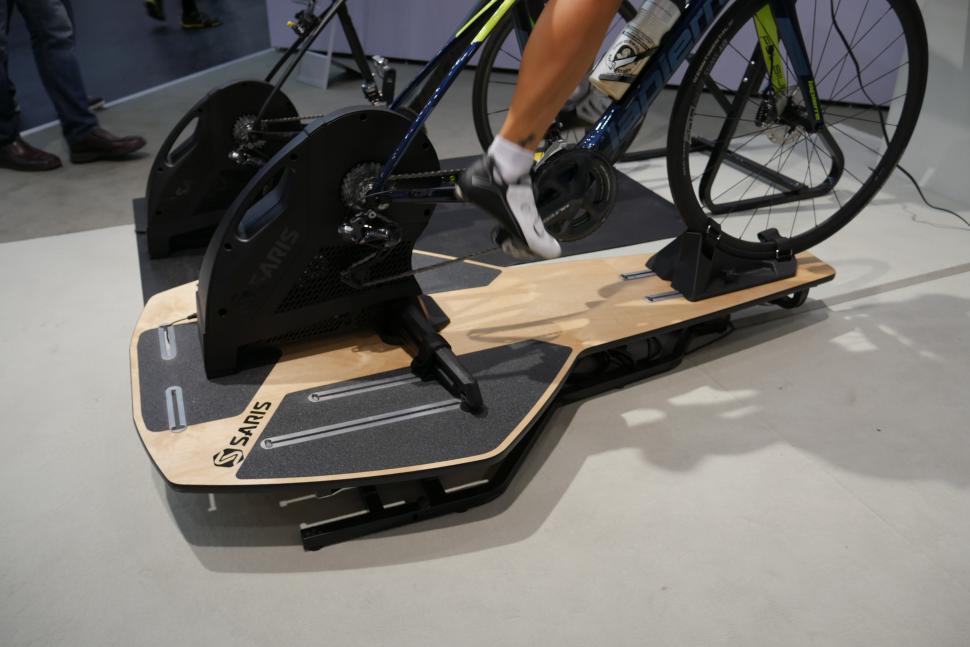 The rocker plate that costs more than most smart trainers.

The £999 price tag is rather lofty, but Mat Brett took an in-depth look at the nicest rocker plate that we've seen. 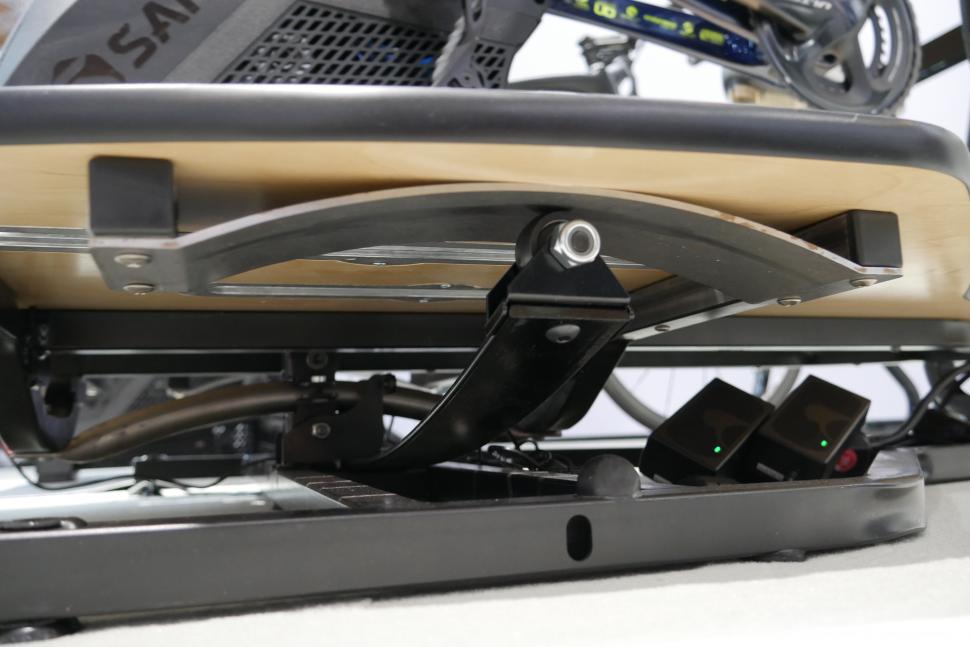 We stopped by Rouvy's stand to see their training platform and were surprised to see roads that we recognise.

Rouvy uses video of actual roads, allowing you to look at something more interesting than Watopia while you do your augmented reality ride. They've got structured workouts, races, and loads of other stuff, all on 'real roads. Elite has two new trainers on display, the first being the Suito. There's also a new Drivo X, which you can read about in Mat's article below.