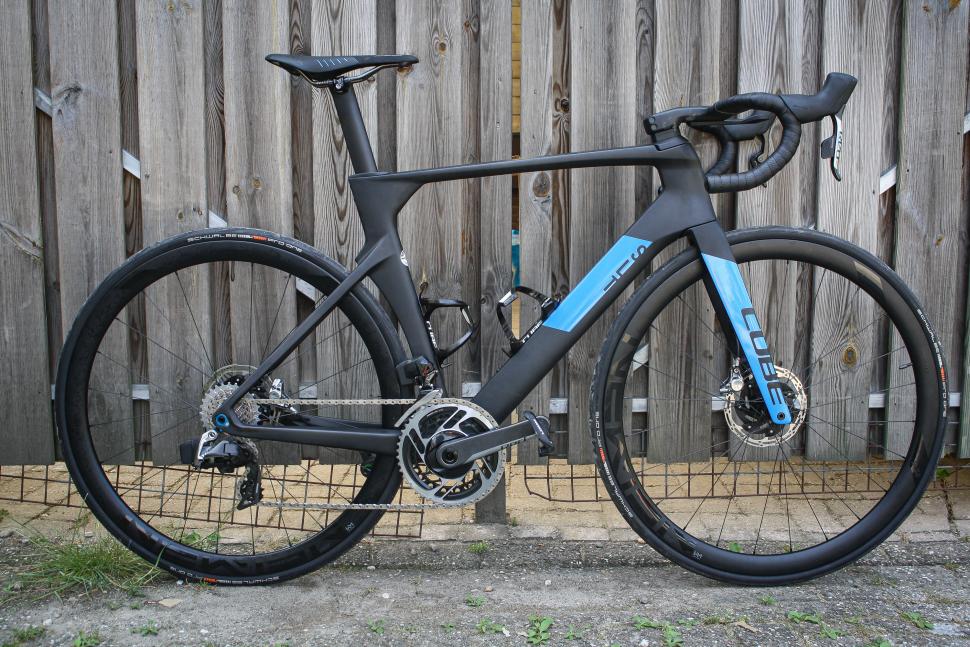 Cube has taken its flagship Litening carbon race bike right back to the drawing board and given it an aerodynamic makeover with disc brakes only and a new integrated handlebar for full internal cable routing.

The new bike has been revealed days before the Tour de France, expect to see Wanty-Groupe Gobert racing this bike around Belgium at the weekend. Before that though, Tony was dispatched to Holland to see the new bike in the flesh and take it for a first ride. 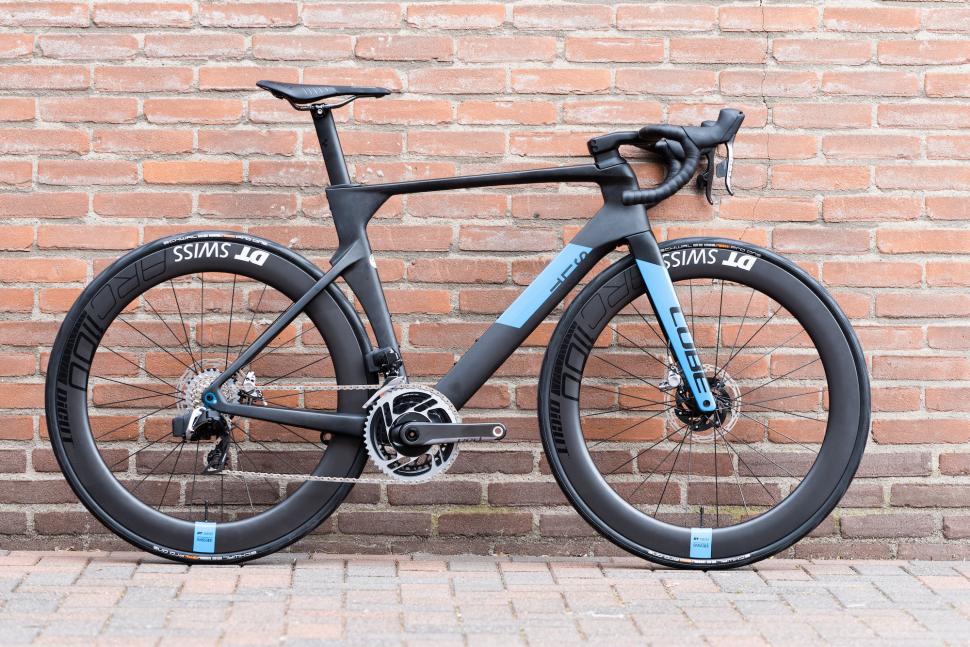 It’s very much a bike of its time too when it comes to groupset and braking options in that it’s only available as with electronic groupset options – either Shimano or SRAM, and it’s disc brake only. The Cube designers honed the design with over 100 hours in the wind tunnel and then did another 1,000 hours of flow simulations. The result is an impressively stealthy machine that makes few, if any compromises when it comes to being as aero as possible.

The biggest compromise of course for any aero race bike is complying with the UCI’s technical rules, and Cube is upfront about the fact that they pushed them to the limits with the Litening. A quick 40km blast on flat Dutch roads certainly confirmed that it’s a fast and slippery customer, but of course, bike races aren’t just on the flat, here though the new Litening scores again with a sub kilo frame weight – 960g to be precise – for the 56cm. Cube say they looked at the competition to establish a frame weight benchmark for disc braked race bikes, they reckon most hit the scales at 1,000g, and then tried to beat that mark. Rim braked frames have been coming in at substantially lower weights than 960g for years, but as far as Cube and most of the other manufacturers of top-end race bikes are concerned the rim brake is now history. It’s worth saying that given the UCI’s 6.8kg bike weight limit there should be no actual weight penalty involved if you can make a disc braked bike that makes the limit, in fact, there’s an argument for saying that having that weight needed to make the UCI limit actually in the bike frame itself is preferable to having it as lead weights in the seat tube. The result of all that testing and multiple design revisions is a full aerodynamic frame, compared to the more conventional looking predecessor, which pushes right up against the UCI’s strict rules governing bike design. It has focused on reducing the frontal surface area, hiding all the cables inside the frame and developing a new integrated handlebar and stem. Cube is claiming a 30 watt saving over the previous model. It also developed its own integrated handlebar, increasingly a common sight on aero bikes since it helps to reduce the frontal surface area. Cube has opted for a one-piece design with all wires and hoses routed inside. The wires and hoses pass into the frame around the steerer tube thanks to the wide stem which has allowed it to keep the head tube narrow. Computers and lights can be fitted to optional mounts. 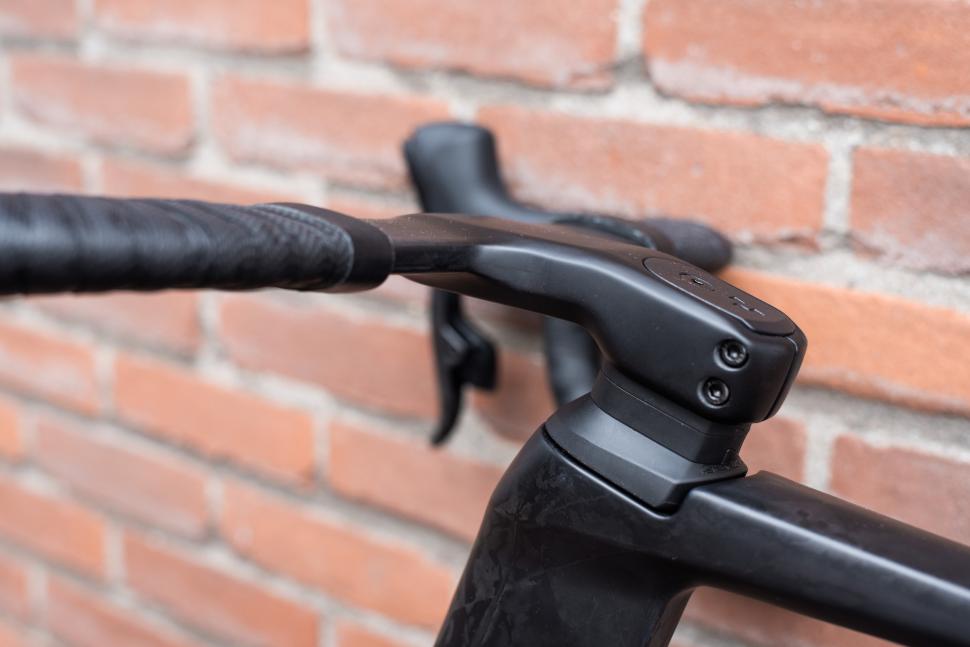 Like the Specialized Venge, the new bike and indeed the handlebar is only compatible with electronic groupsets, there’s no compatibility with mechanical gearing. Then, it went and employed an evolution of its previous C68 carbon fibre, C68X, which yes is lighter and stiffer. A quick refresher on C68. The number refers to the fact that there’s more fibre and less resin, 68% is carbon in fact. The pre-impregnated carbon that bicycles frames are made from is carbon fibres combined with resin, an epoxy type material. No carbon frame is 100%, but bike manufacturers strive towards reducing the percentage of resin.

This development of the new C68X has helped Cube to achieve the claimed 960g frame weight for a size 56cm. That compares well with other aero bikes. The Specialized Venge is coming in at 960g, a Cervelo S5 Disc is 975g and a Cannondale SystemSix is 981g, so it’s right on the money. Cube is one of the growing numbers of bike brands to offer a new aero bike with disc brakes only, there will be no rim brake option. That’s the same as the Venge, SystemSix and S5 Disc. It’s using 12mm thru-axles and flat mount callipers, very much the standard now.

Bikes will be specced with 25mm tyres. It’s approved for 28mm tyres but 30mm Conti and Schwalbe tyres will fit. Cube tells us the optimum aero setup from its testing is a DT Swiss ARC 60mm wheel with 25mm wide tyres. When can I buy it?

Not until the end of the year, I’m afraid. There will be a range of models, all but the cheapest model get the C68X carbon fibre frame; the Ultegra model uses regular C68 carbon. We'll have more info on this bike soon, and we'll be sure to check it out at the Tour de France this week.