Eurobike 2018: six bikes to look out for from 3T, Kona, KTM, Nicolai, Rondo and Superior

Gravel is where it's at at the Eurobike Media Days event... and aero road. And sometimes a combination of both.
by dave atkinson

Guten tag! We’re in the rather picturesque setting of Fiss in the Austrian Tirol right now. It’s a hard job, but someone has to do it. Anyway, the reason we’re here is because there’s a thing going on, and the thing is Eurobike Media Days, a spin-off from the main Eurobike show (that starts on Sunday) where the press get to paw some bikes and, more importantly ride them. We’ve got a few test rides lined up already, but before we get into all that we thought we’d show you a few things we’ve seen. Starting with…

Okay, if you’ve been following road.cc closely for the past 24 hours this won’t be news as we’ve already announced it, but we’ve seen the bike in the flesh now too. And, maybe more importantly, we’ve got the rundown straight from the horse’s mouth, the horse in question being none other than designer Gerard Vroomen. Here’s what he had to say about the bike…

The shape of the bike is entirely unchanged: it’s optimised for wider tyres so you get the comfort of a big tyre with the stiffness of an aero race frame. The only physical difference is that the frame is drilled for electronic groupsets – SRAM, Shimano and Campagnolo will all work – and the layup of the seat tube is changed to give a bit of extra stiffness where the mech hanger is mounted. 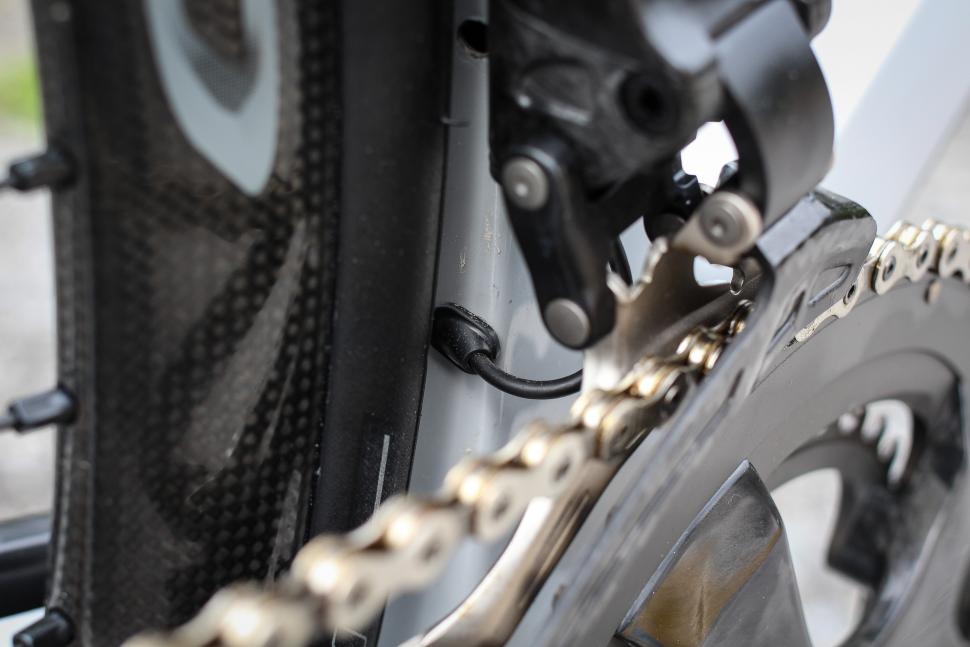 Here’s where the wire comes out. On the production bike it’ll actually be in a slightly different position. 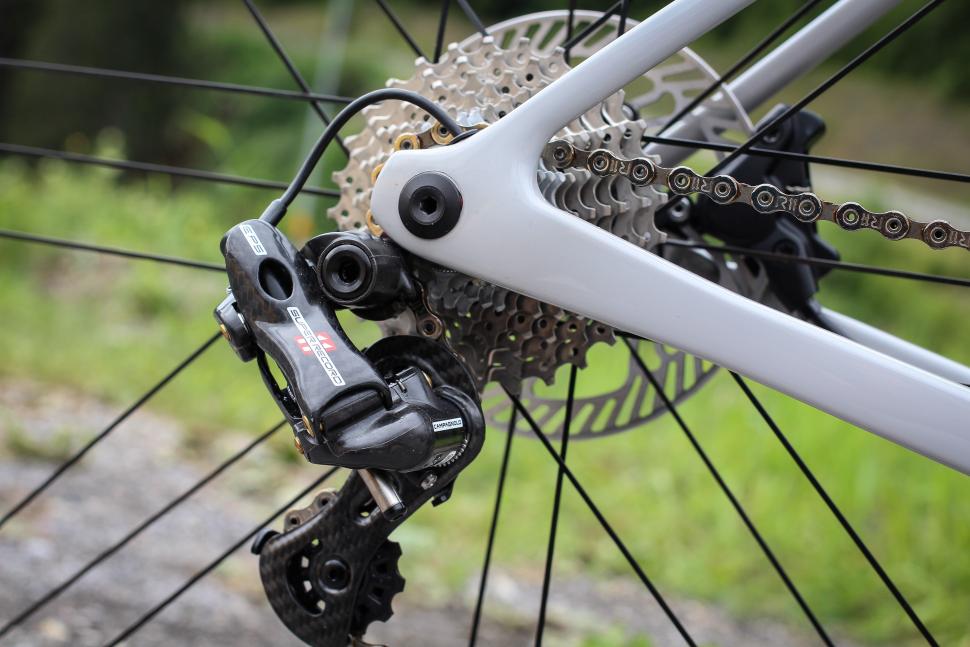 The bike in these pics is running Campagnolo Super Record EPS. This one’s not actually rideable, but there are SRAM Red eTap and Shimano Dura Ace Di2 bikes that are, so we’ll hop on one of them. 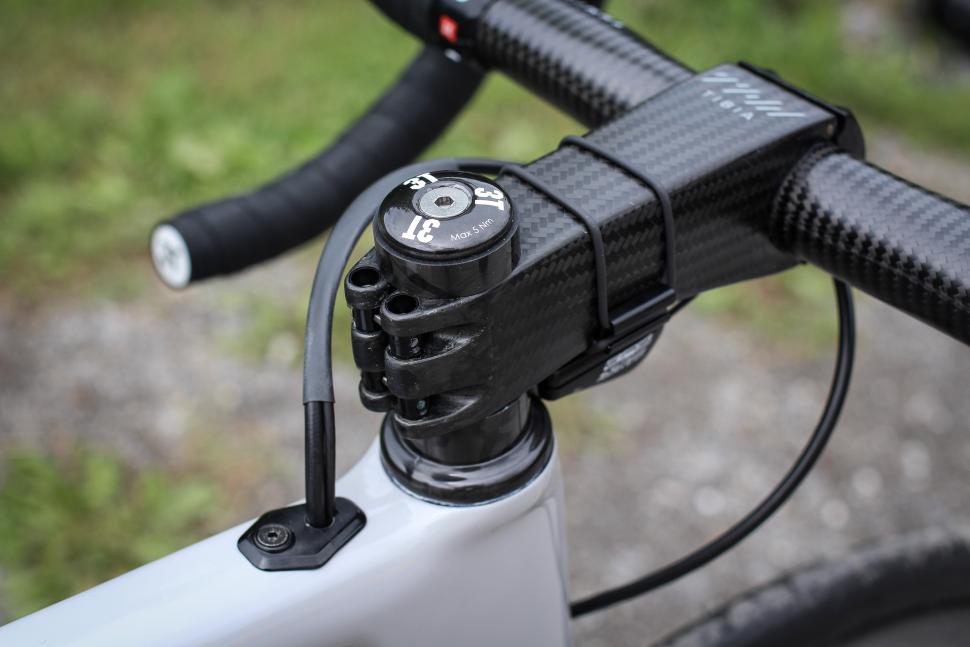 This bike is also finished with THM’s Tibia stem and Ulna handlebar. That’s super-light finishing kit, with the stem 81g for a 110mm length and the bar weighing just 149g in a 42cm. Vroomen reckons it’s still stiff enough for racing though. 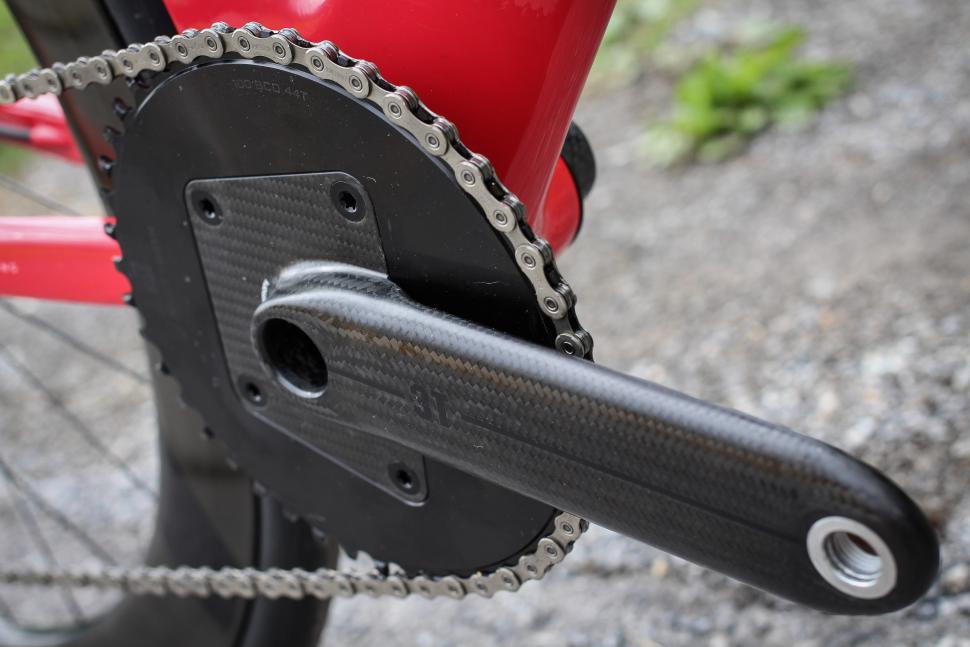 3T have also finally released their single chainring crankset into the wild. It’s the “world’s first single ring aero crank” according to them, although we can’t help thinking that there’s something out there that predates it in that regard by probably half a century somewhere in the time trialling annals. 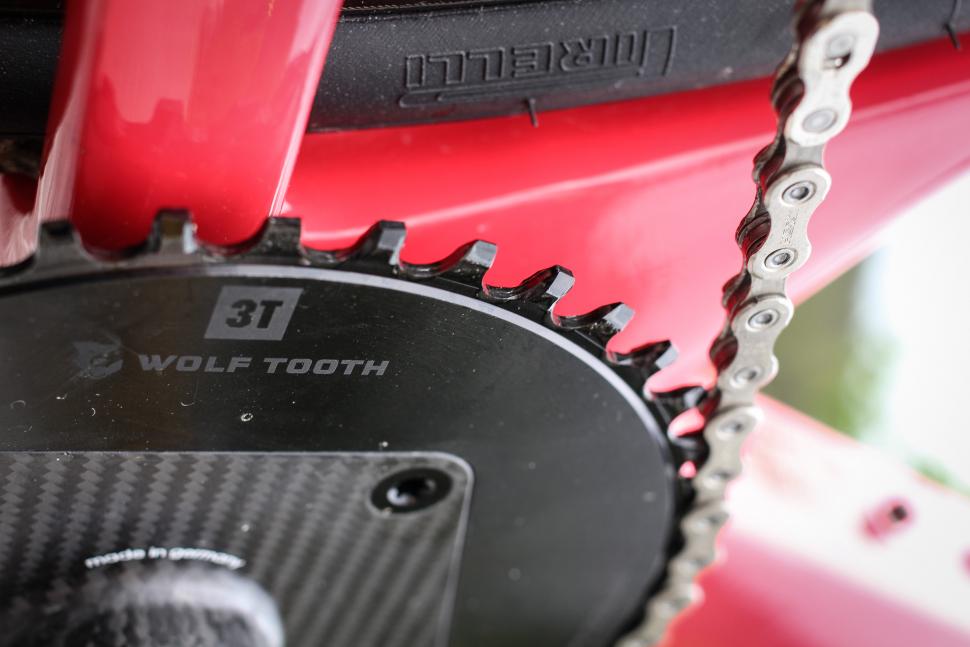 The cranks are only 12mm thick at the pedal axle, significantly thinner than most cranks; 15-17mm is more normal. The narrow cranks reduce the Q factor of the crankset by 4mm. The spider is a trapezoid flat plate that mates with specially designed Wolf Tooth chainrings to create a fully flat surface for better aerodynamics. THM, who are now a sister company with 3T after the two merged in 2016, make the Torno crank. 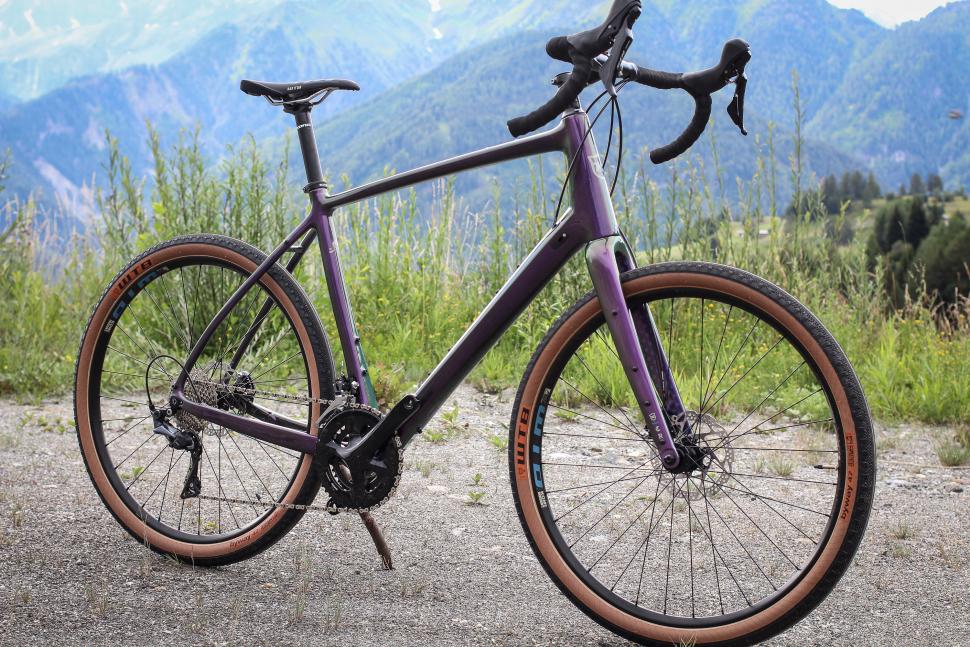 There’s a wide range of gravel and adventure bikes out there these days, with everything from gravel racing to loaded bikepacking covered. The Kona Libre sits very much at the latter end of that spectrum, with comfort geometry and more mounting points than you can shake a bar-roll at.

How many bottles do you want on your bike? The Libre has two sets of bosses on the down tube and one on the seat tube, so that’s three straight away. On top of that there’s one by the bottom bracket, and a set of mounting points for a bento box on the top of the top tube, which could be pressed into service too. So that’s five. 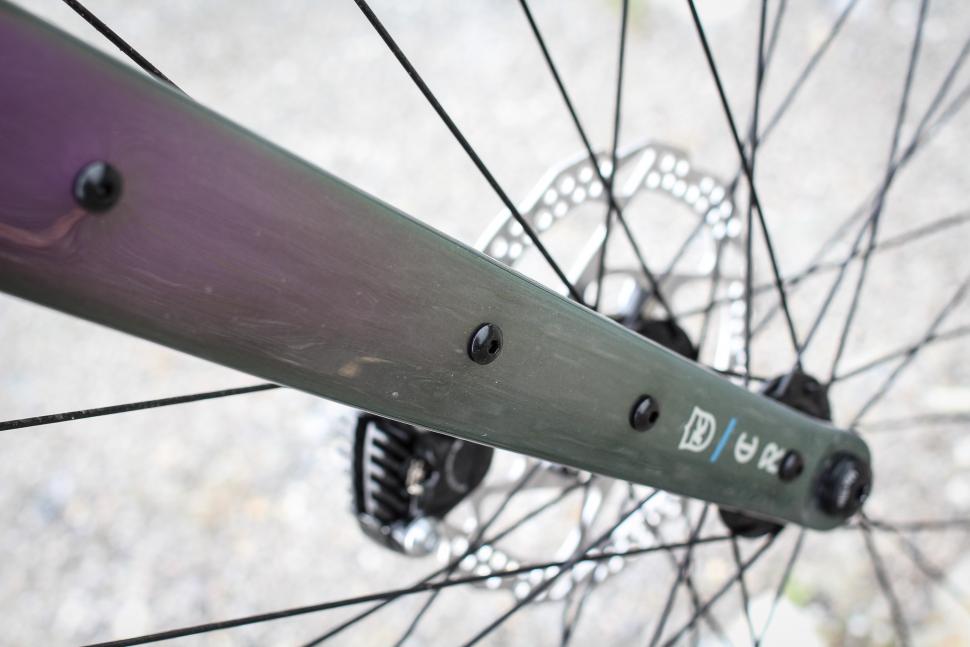 There’s four mounting points on the outside of each fork leg too. These are heavy duty mounts; they’re not just drilled into the outer face, they extend all the way through. You could put a couple more bottles on the lower points for a grand total of seven, if you were really thirsty. More likely you’d be using the different mounts for various bits of luggage for an adventure. There’s standard rack mounts at the back too, if it’s traditional panniers you’re after. 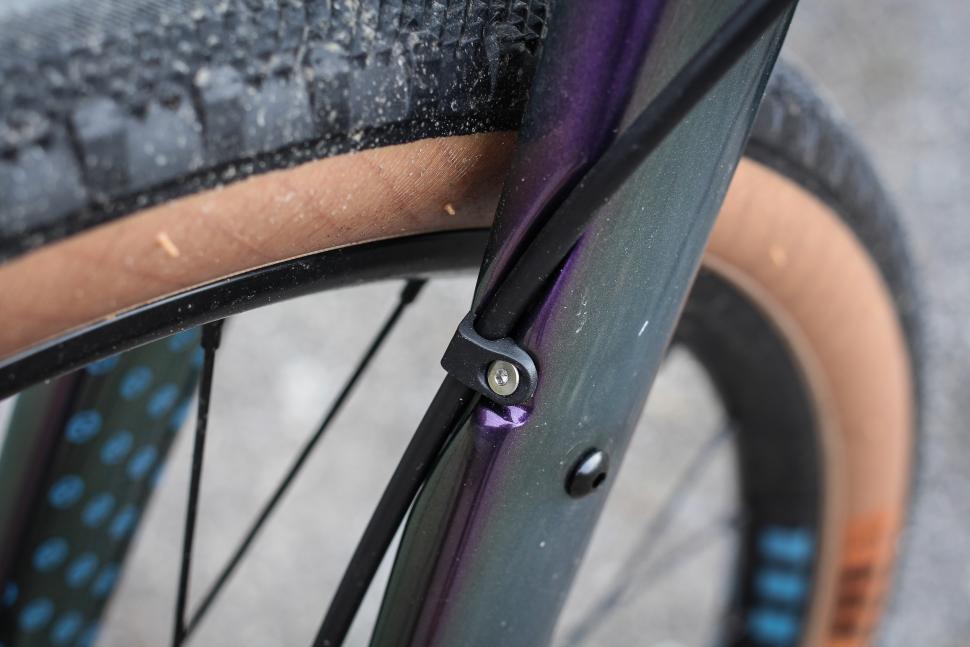 Like many adventure bikes these days the Kona Libre can accept either 700c or 650b wheelsets, and full builds are available of each. The build in the picture (just called the Libre) is £2,899 with the green Libre DL bike in the video a bit more expensive at £3,699. We like the purple iridescent paint scheme of the 650b bike best though. It’s like your dad’s Rover from 1994. 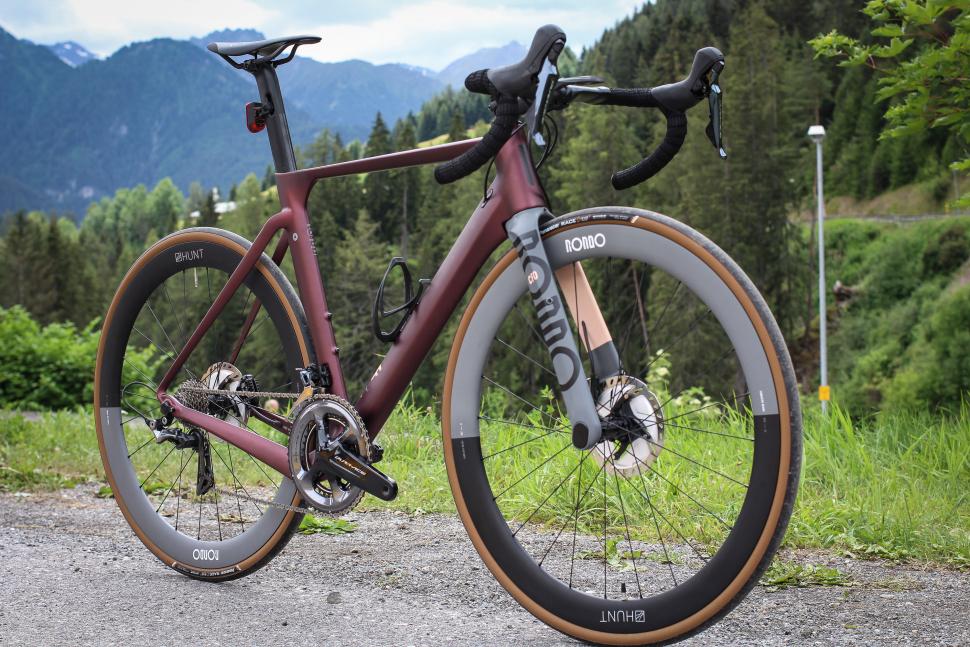 From one extreme to the other, gravel-wise. Introducing the Rondo HVRT. That’s pronounced ‘Hurt”. Or it might stand for ‘High Velocity Rough Terrain’. Anyway, it’s a very interesting bike. You might be looking at it and thinking, “that’s not a gravel bike! That’s an aero road bike!” And you’d be right. And also wrong: 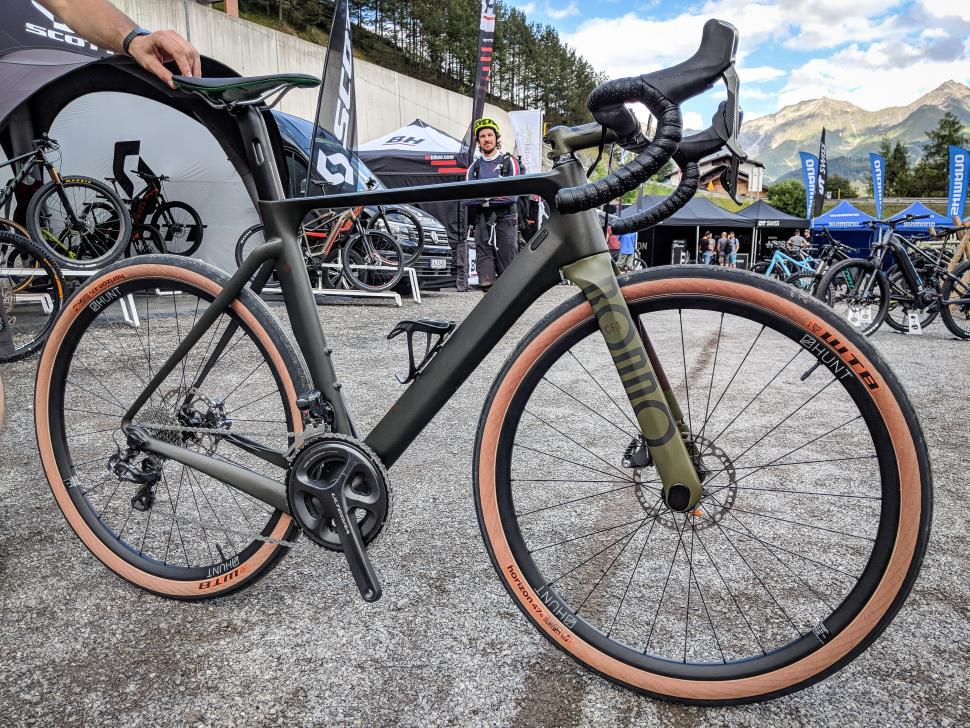 The HVRT is both. It’s aero-optimised for a wide road tyre and a 700c wheel, but as you can see from the pic above, it’ll also take a 650b wheel and a tyre up to 47mm in width. At which point it’s turning into something a bit more like a 3T Exploro, although that bike is specifically shaped to be most aerodynamic with wider gravel tyres. 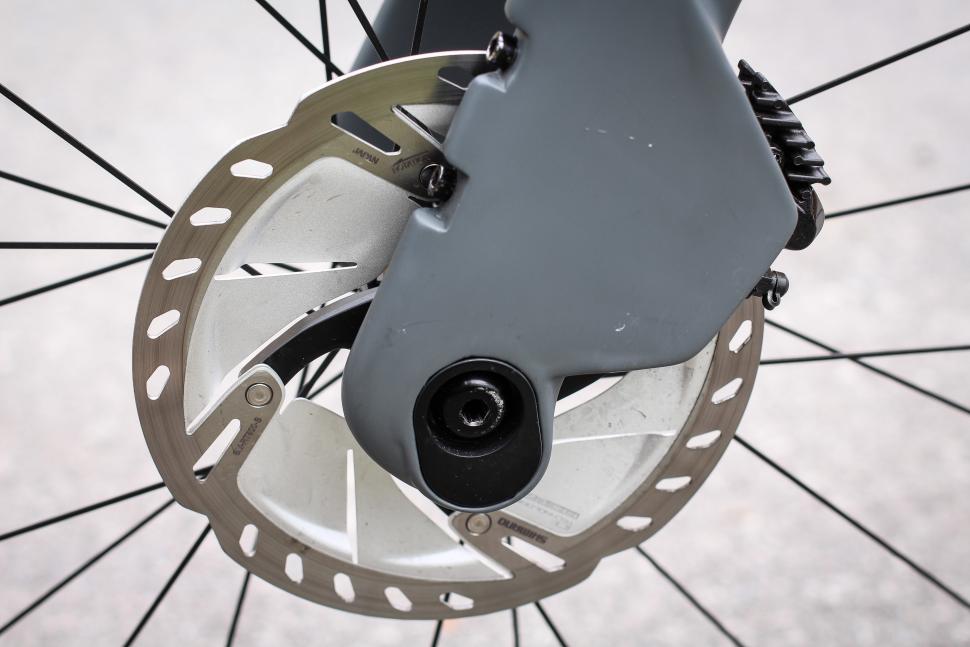 The HVRT has a swappable front through-axle mount. You can run it in the orientation shown in this picture, in which case the bike hunkers down a bit, or you can rotate it 180° to raise the front end by 12mm and increase the trail by 10mm. That’s a more upright geometry, but Rondo is keen to point out that it’s still very much a fast riding position. It’s more like the difference between Trek’s H1 and H2 race fits than a race and a comfort option. You can run either wheelset in either position. 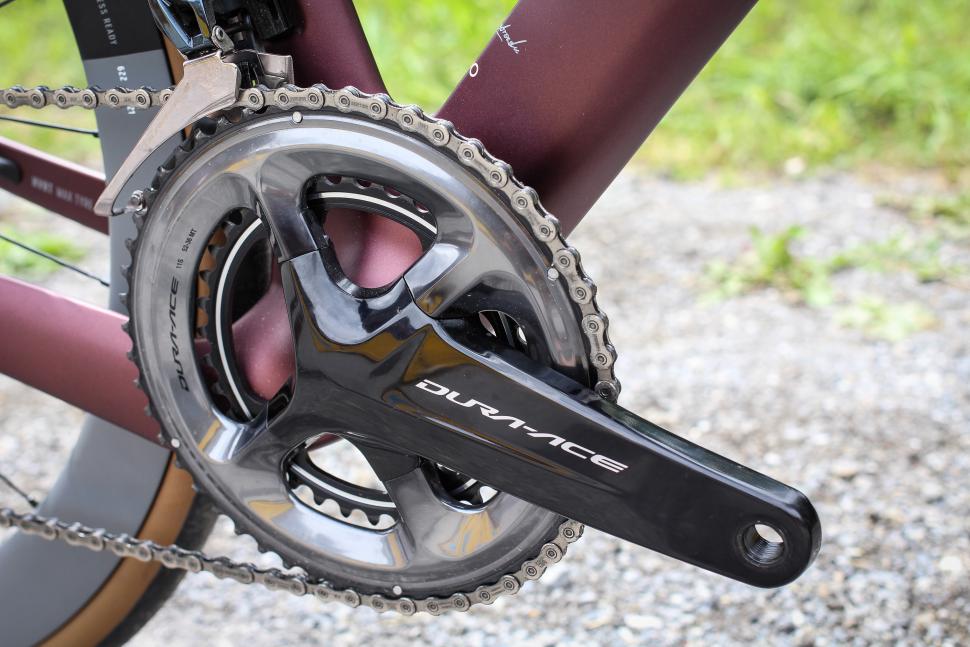 This Dura Ace build, with Hunt’s 50mm carbon wheelset, won’t come cheap: the list price here is €6,399. Other more affordable builds will be offered when the bike is in production, which will be towards the end of the year. 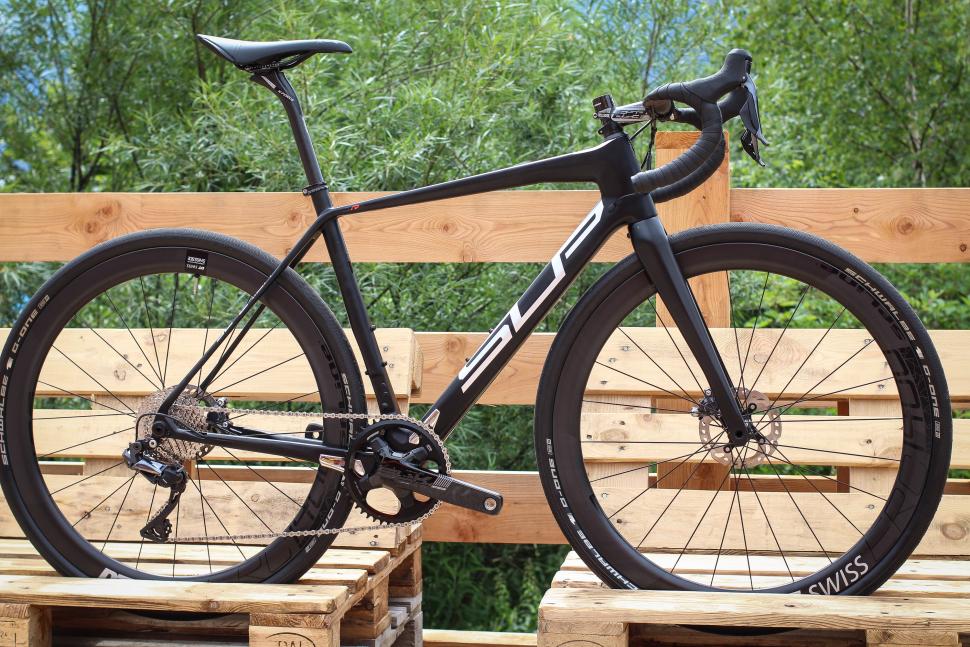 Eurobike is a great place to encounter brands you’ve never really seen before. Superior is a Dutch brand, and when we saw the carbon-framed, 40mm-tyre-ready gravel racer that is the X-Road our first thought was: here’s another Johnny-come-lately brand jumping on the gravel bandwagon. Turns out Superior has a 20-year history and this bike has been in the range for five years. So that was us told. Given that fact, five years ago it was a long way ahead of its time, with a pretty racy geometry and support for tyres you couldn’t even really buy… 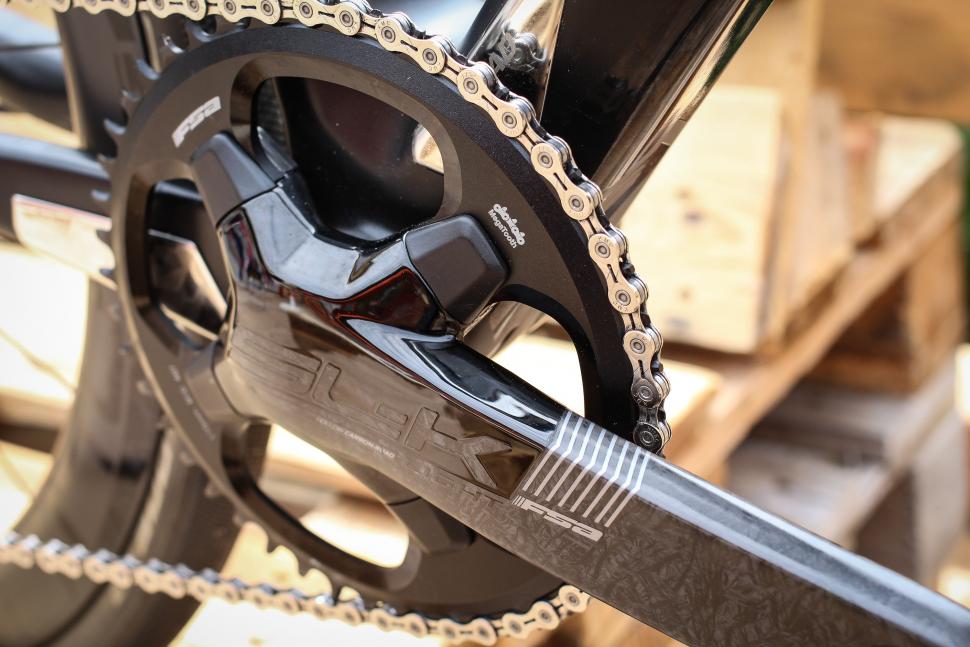 This is the first time the bike has been offered with a 1x transmission, though it still supports a front mech if you prefer one. Superior has opted for Shimano’s new Ultegra RX Di2 clutch mech and an FSA MegaTooth ring at the front. 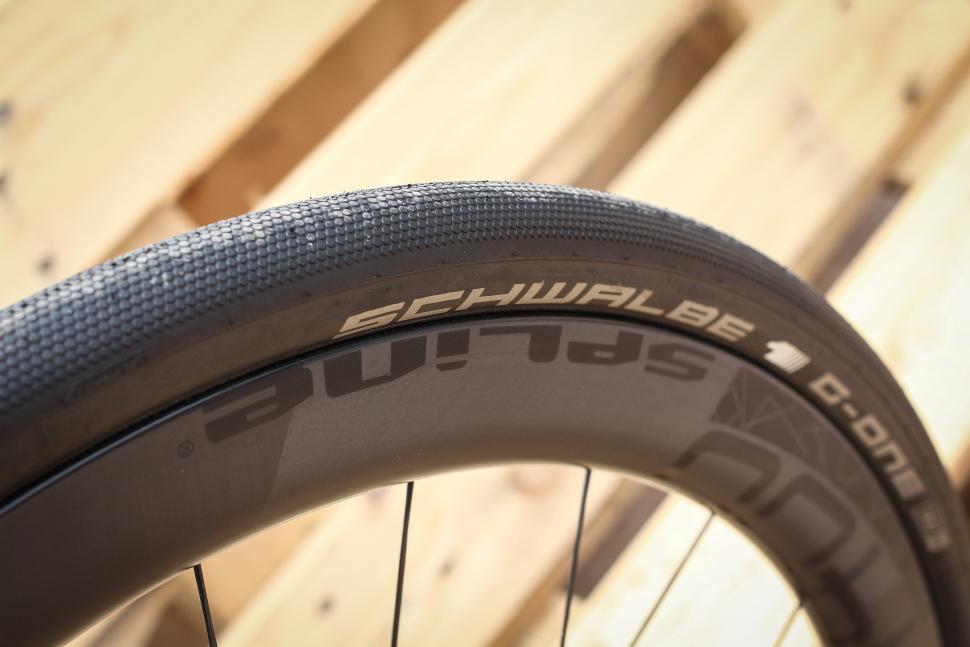 The bike in this build, with DT Swiss carbon rims and carbon finishing kit, costs €5,000. There are four carbon builds, and three bikes that use an alloy frameset, so it’s a full range. 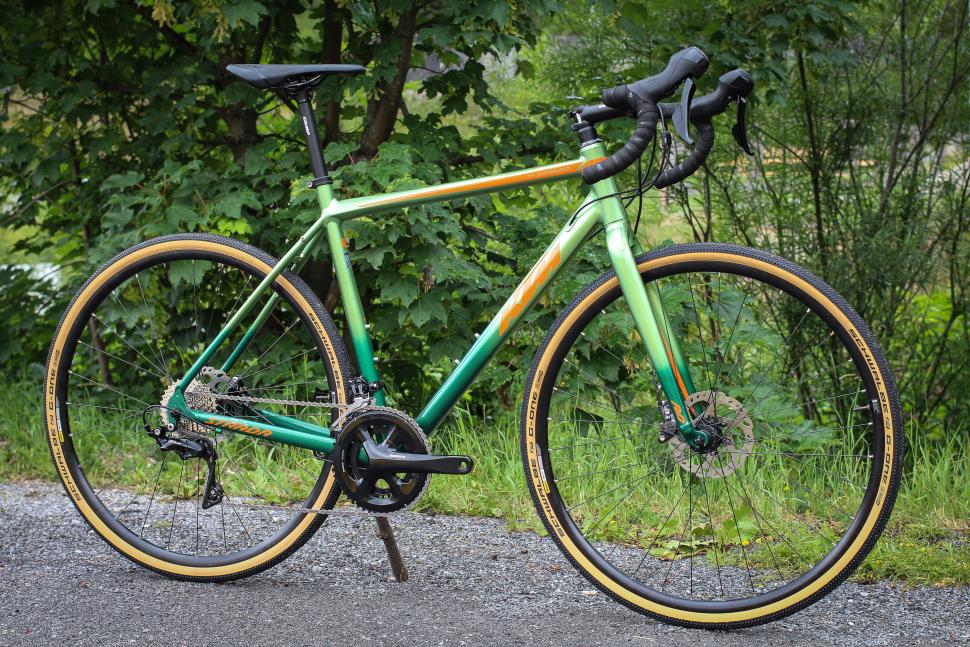 Not everyone was pushing their most expensive bike. KTM were very keen to show us the X-Strada, a simple all-rounder with plenty of space for big tyres, that the company reckons is a perfect bike for urban riding and adventure escapes at the weekend. We’d tend to agree. 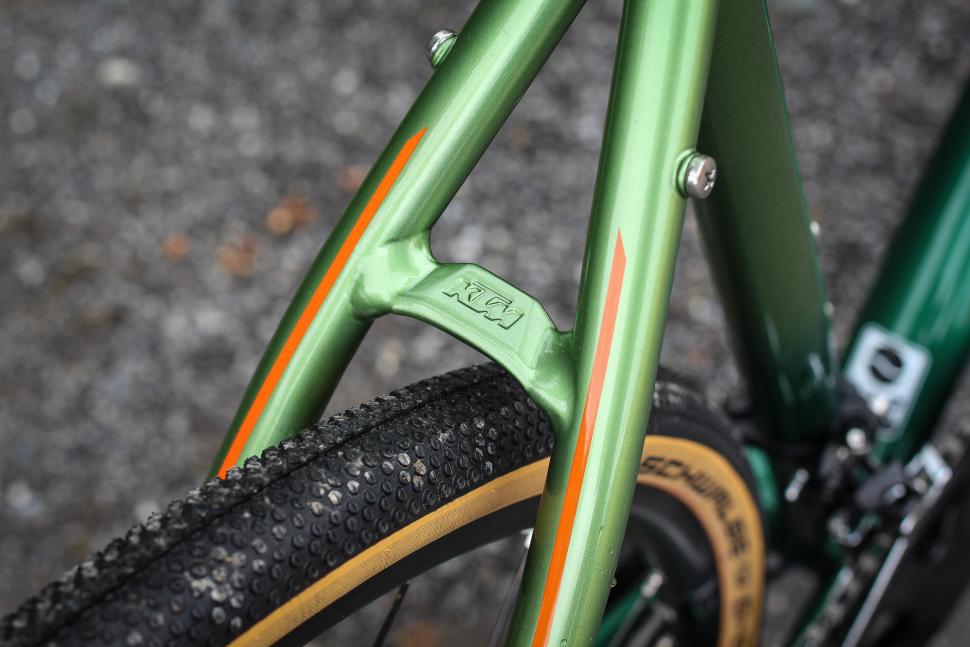 The bike is built around an alloy frame and a matching alloy fork to keep the cost down; the bike, which is available in this build only, costs €1,699. It’s finished in a green fade with orange decals. We reckon that will split opinion; take our word for it that in the flesh it looks smashing. We made a beeline for it as soon as we saw it. 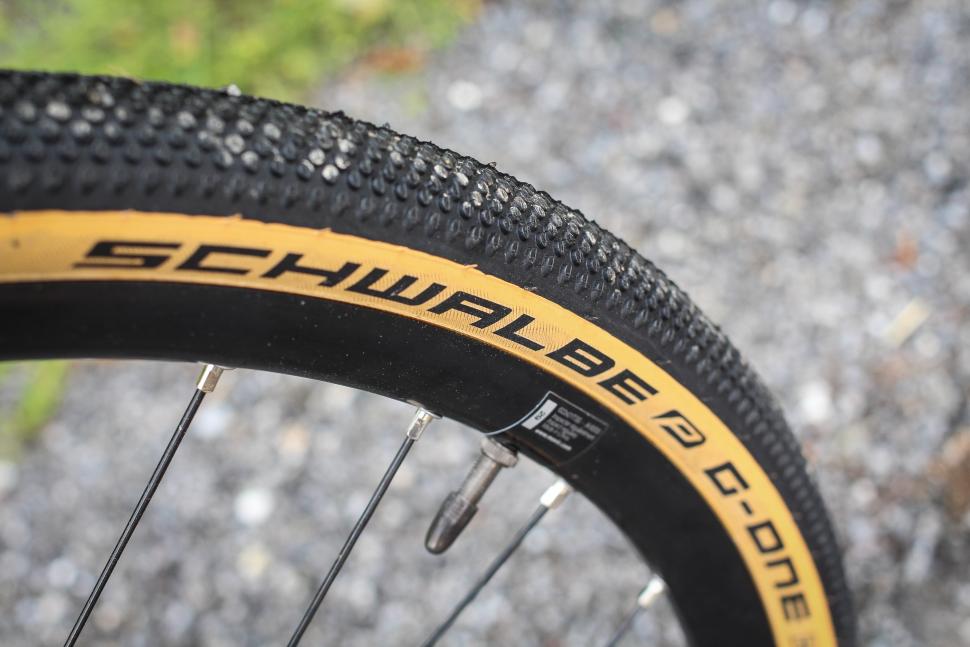 The bike comes fitted with Schwalbe’s tan-wall G-One Allround tyres in a 40mm width. You won’t get much more tyre in there than that – the chainstays at the bottom bracket being the tightest clearance – but those tyres should carry you pretty far off the beaten track if that’s where you want to go. 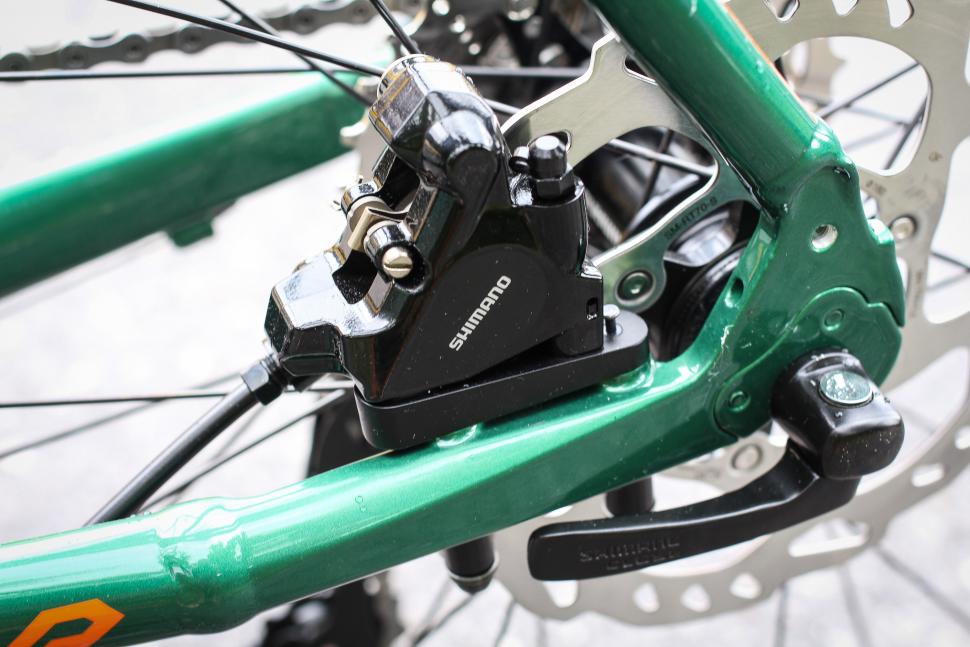 The X-Strada is fully ready for a rack and mudguards if you want to fit them, and is running Shimano’s 105 groupset with hydraulic discs. It looks like a solid, uncomplicated bike you could do a lot with. 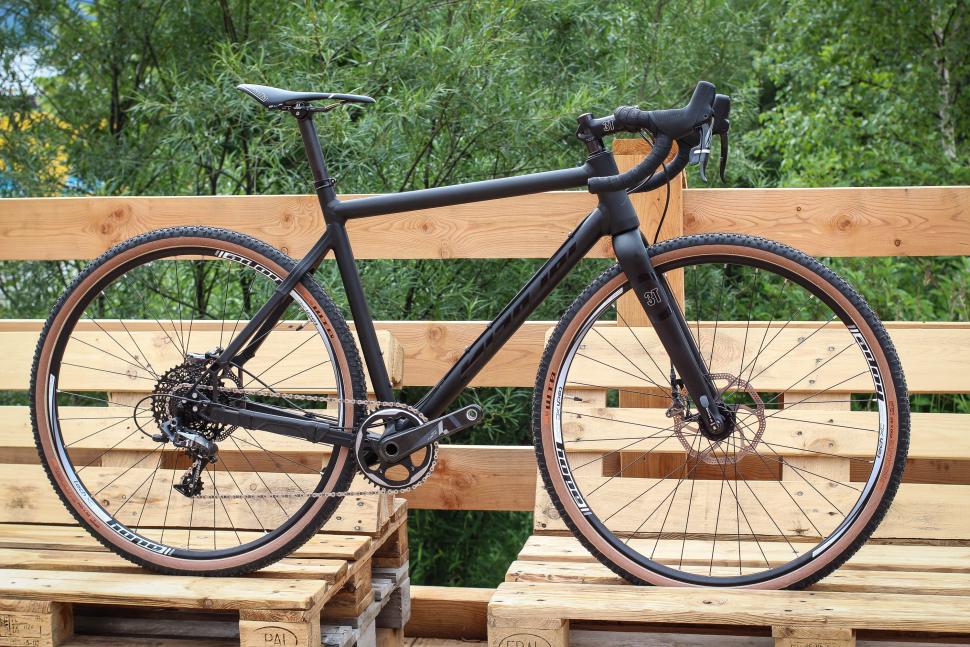 Nicolai’s Argon CX has been in the range a few years. The CX in the name suggests it’s more aimed towards faster riding, and the geometry is closer to a CX racer than a comfort adventure bike, but that’s not the whole story. 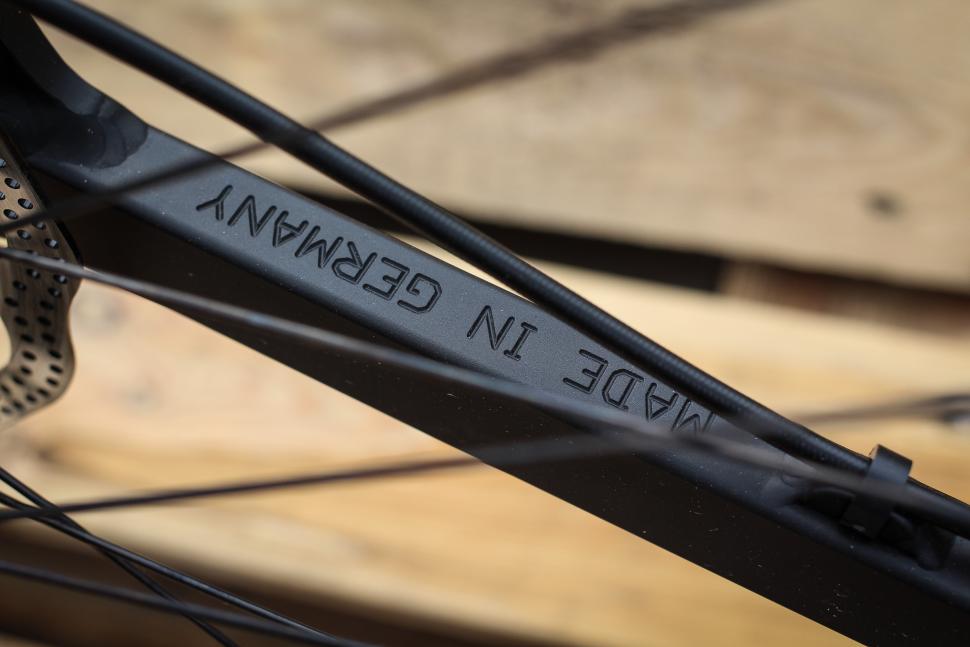 The frames are all hand-built in Germany, so you can specify whatever cable routing and bottle boss configuration you like. And you can have the bike built to a custom geometry if you want something different to stock. It’s not cheap – a €730 cost option on top of the €1,449 frame price – but if you’re an odd size or shape it might be just the ticket. 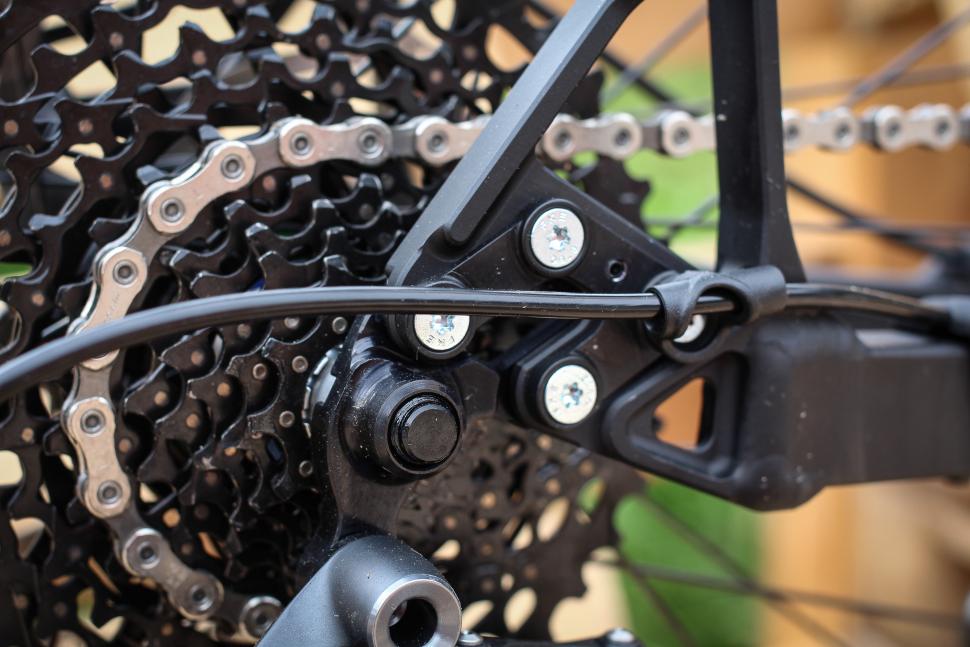 As well as that, Nicolai’s dropout system allows a huge range of drivetrain choices. This bike is running a fairly standard SRAM Force 1x groupset, but if you prefer you can ditch the derailleur and fit a Shimano Alfine or Rohloff hub. The frame splits at the dropout, too, so a Gates CDX belt is also an option. Nicolai even offer the bike with the Pinion bottom bracket gearbox. So whatever floats your boat.

That’s all for now! It’s raining at the moment so any thoughts of more test riding right now have been postponed while we eat Strudel, but we’ll be back on it tomorrow. Stay tuned for more from Eurobike!