The new Specialized Venge aero bike is evidently fast, as the speed ramps on a gently swooping road through the lush forests surrounding Innsbruck, but it’s the much-improved handling and stiffness that most sets the new bike apart from the old Venge ViAS.

I’m getting a quick first impression of the new Specialized Venge, several years in development and the third incarnation of an aero bike that traces its roots back to 2011, around some of the roads that will be used in the road race world championships later this year. 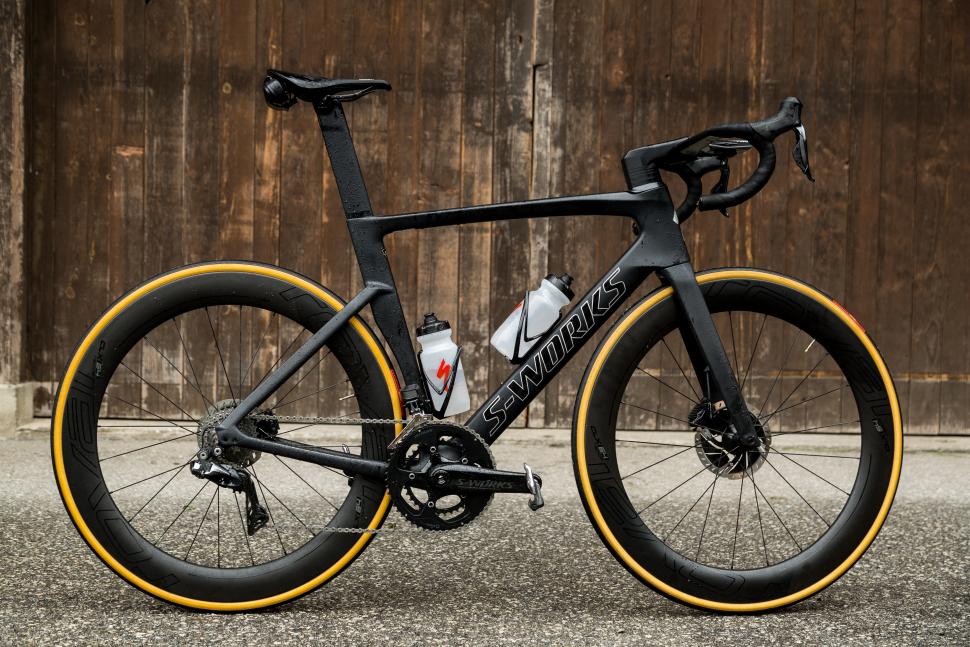 But with just one single ride a first impression is all I can offer, more time will be given to fully assessing the bike on familiar roads as soon as the one I’ve been promised arrives. As first impressions go though, the new Venge does not disappoint.

The last Specialized I rode was the all-new Tarmac SL6. One of the most improved bikes of the last couple of years, it instantly went to the top of my list of favourite road bikes. So I was pleased to find some of the handling traits and responsiveness of the Tarmac were evident in this new Venge.

That’s no surprise really, given one of the key targets with the new Venge was to improve the handling and the stiffness. But Specialized also wanted to produce a bike that is less compromised than old aero bikes and to make it more usable across all sorts of terrain. Terrain which around Innsbruck is ideal for testing a road bike. Really, I could do all my bike testing here, it’s just lovely. Lots of nice climbs that (the ones we rode anyway) weren’t terribly steep, fast descents, good quality road surfaces, and terrific views all around. I can highly recommend it for cycling. As can I the views from the bar terrace of the Adlers Hotel.

Enough with the views, let’s get back to the riding. The road I’m on has been gradually climbing for a while, allowing a gentle acclimatisation, before it twists and turns into a ferociously fast descent. Descents are always a good place to showcase how good or bad a bike handles, and despite the fact I’ve only been riding the new Venge for about 45 minutes by this point, I feel confident to fully attack the descent as if I had been riding it for much longer.

What’s immediately noticeable about the new Venge is the front-end, it feels so much more direct than the old bike and more akin to the Tarmac, but sharper still. The handlebars feel very connected to what the front tyre is doing, and as such I’m able to move the bike about with utter precision, sweeping from the inside to the outside of the road to carry maximum speed through the apexes as I hone in on my fellow journalist a dozen or so metres ahead of me. 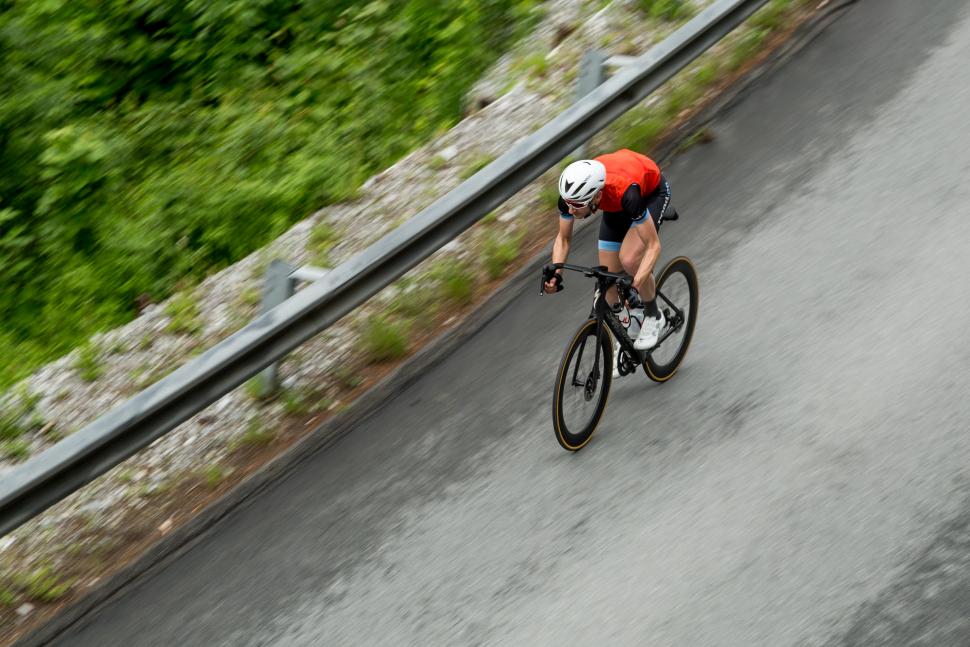 The road was wet too, thanks to some isolated showers that had rolled in off the surrounding mountains. Probably should have mentioned that sooner. So here I am hurtling down a steep descent I’ve never seen before on a bike I’ve never ridden before, on the wrong side of the road, yet the handling of the Venge and those powerful Shimano hydraulic disc brakes ensured I felt comfortable to take some liberties on this descent. I arrived at the bottom all smiles and giggles. What fun this bike is.

Sprinting and climbing out of the saddle - because these press rides always turn into the world champs - does reveal a higher stiffness level than the Tarmac. It’s got a harder edge, this Venge, which is probably to be expected given it’s designed for the fast men like Peter Sagan and Elia Viviani who won’t tolerate any flex at all. My 65kg mass couldn’t bring about any flex that’s for sure.

It feels far more alert and ready to pounce when anybody from your group decides they’re going to sprint for that town name sign at the top of the crest. Click up a gear, lift out of the saddle and give chase, the Venge responds with alarming sharpness. The handlebars don’t flex or twist, the frame and fork feel as stiff as you like, there’s no rub from the disc brakes. 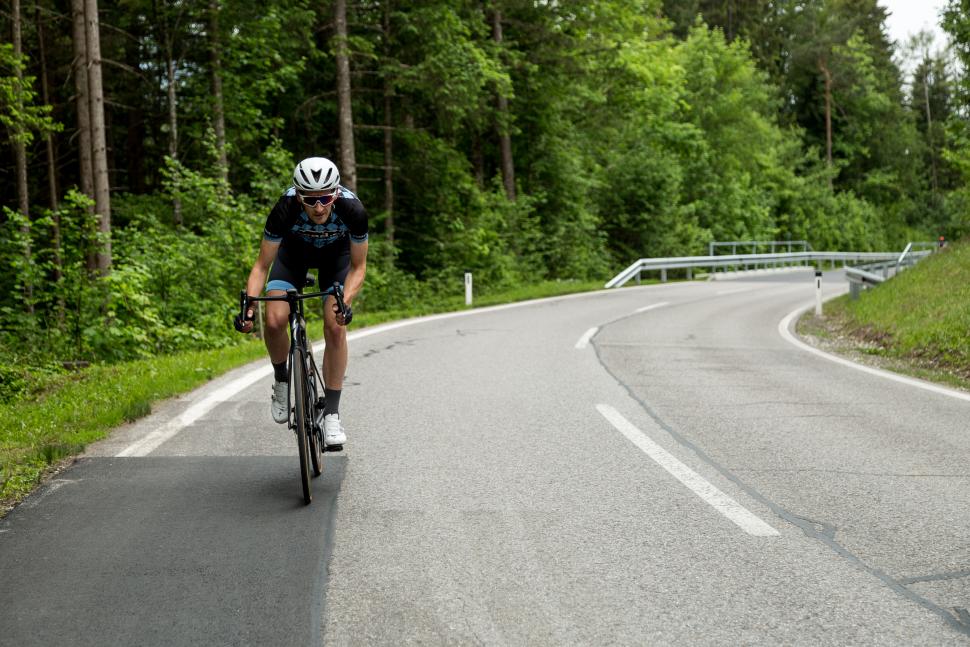 But at a snifter over 7kg for my size 56cm (and that’s with a power meter installed) the Venge doesn’t feel to be giving much away to the Tarmac, or any other reasonably lightweight bike for that matter. Yes, it’s still heavier than a Tarmac, Emonda or Supersix Evo, but Specialized has really narrowed the gap, enough that I didn’t feel handicapped on the climbs.

Granted assessing the climbing performance of a new bike on unfamiliar climbs isn’t that easy, but what I’m getting at is that the new Venge didn’t feel unduly compromised in this department, as old aero bikes have often been. It felt sprightly and eager when out of the saddle, with obviously very efficient power transfer.

Similarly, assessing aero performance is impossible without access to a wind tunnel, or at the very least a velodrome. For sure the Venge does feel fast, and the geometry, fit and the new handlebars provide the ability to get into a very tucked, yet comfortable, position for making speedy progress. But whether it’s faster than the previous Venge, as Specialized claims it is, is impossible to say with any certainty.

I’ll save this debate for another article, but it does seem the latest aero bikes are reaching a point where they’re all about as fast as each other, which then leads the decision of which bike to buy onto other factors, such as weight, handling, comfort, integration, usability and of course, looks and price. As previously mentioned the new Venge feels stiffer than the old bike and when compared to the Tarmac, an attribute which has certainly improved the handling. Comfort hasn’t been completely ignored, however, and while it feels a firmer ride than the Tarmac, it was not at all harsh on some of the badly surfaced roads we managed to find. Where the road was coarse, the Venge was compliant and composed. It’ll be interesting to see how it copes with my local roads. 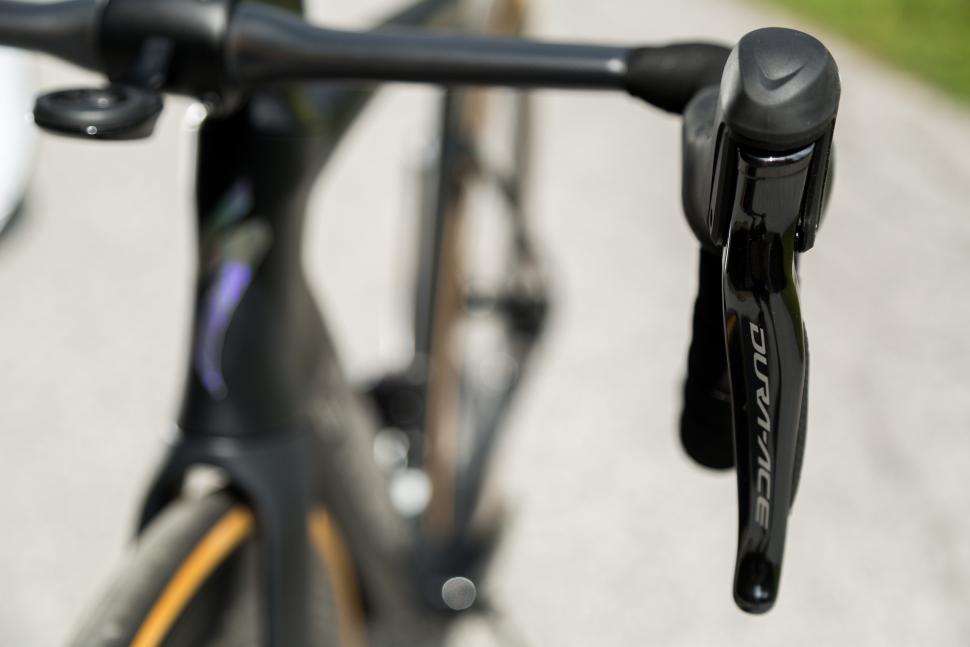 What of Specialized’s decision to only design the new Venge around disc brakes? It will be of considerable concern to some people, the comments will surely show that, but given the direction the road industry is heading, with growing adoption of disc brakes and increased acceptance, it can probably be viewed as inevitable.

The performance of the latest Shimano Dura-Ace Di2 groupset with hydraulic disc brakes is highly impressive though if you feel you are being ‘forced’ to invest in disc brakes. The shifter hoods are as compact as a regular mechanical setup, and when you pull the lever you’re met with a reassuringly powerful feel that leaves you in no doubt of their ability so slow you down very rapidly.

Specialized’s new Aerofly II handlebar is a big improvement on the previous riser bar design. The tops are comfortable in the hands, and gripper material makes up for the lack of tape in this area. The drops are a nice shape and compact enough to ensure an easy transition from the tops to the drops. 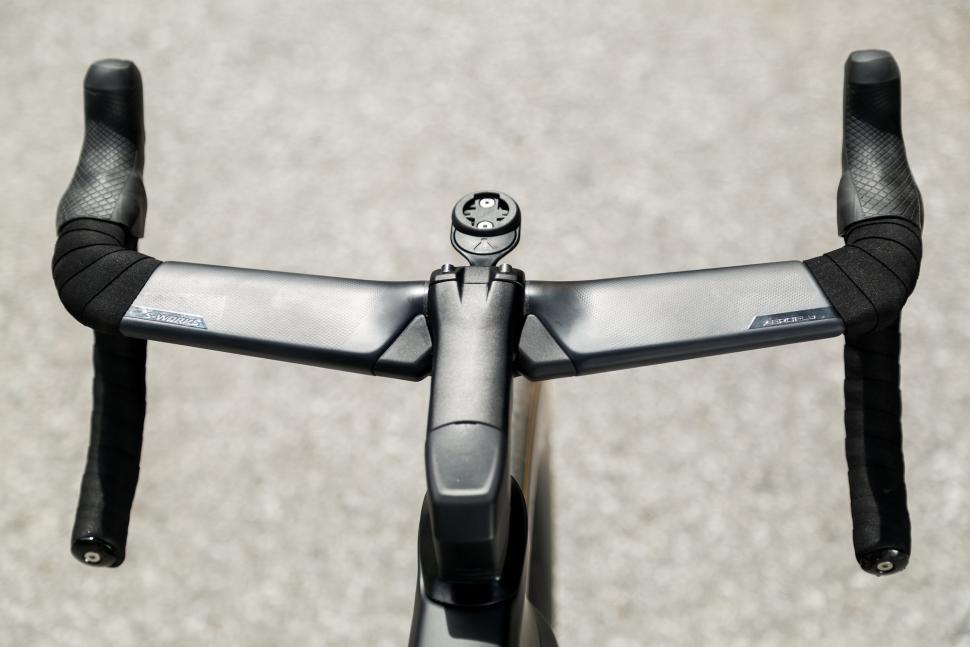 So that’s 1,000 or so words about one ride on the brand new Venge, and that’s probably a good place to call it. As I alluded to, I’ll get the chance to mature these first ride impressions into a full review as soon as the bike arrives.

To sum up, the new Venge is highly impressive. It’s clearly fast and if Specialized’s claims are to be believed, it’s faster than the previous Venge ViAS, a bike that to this day many other brands use for comparative testing. But it’s perhaps the weight savings, the smart integration with a focus on usability and customisation, the improved handling and comfort, and the vastly superior looks that are equally impressive.