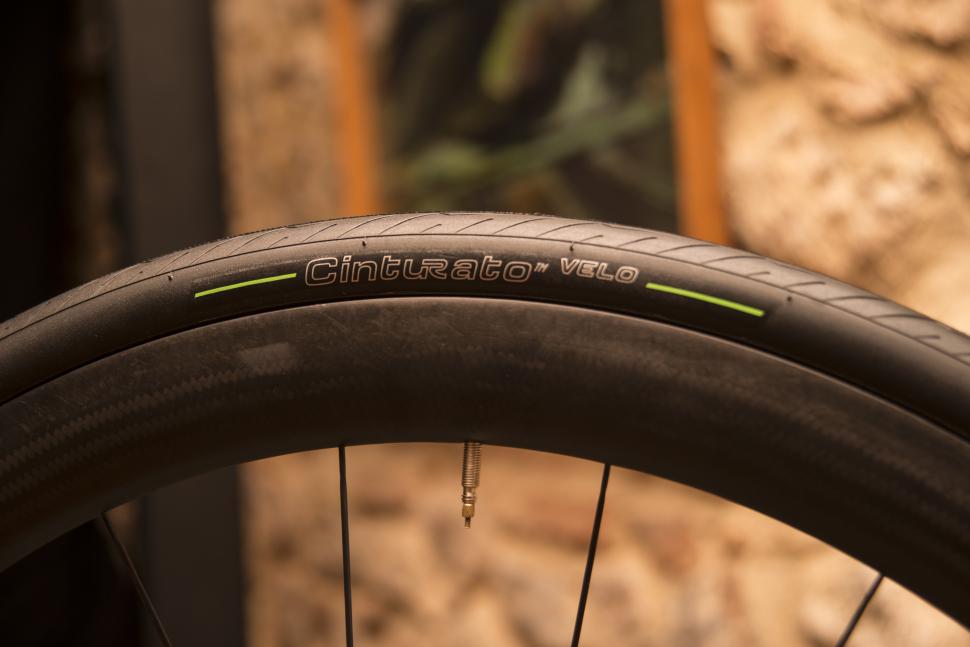 Designed to be used tubeless or with inner tubes, the Cinturato Velo has a new patented Armour Tech construction to guard against anything from rough roads through to gravel, and will be available in four widths from 26mm to 35mm
by Jack Sexty

After making quite a re-entrance back into the cycling world with the release of three road clincher tyres last year, Pirelli have now added a tubeless-ready option to their line-up, the Cinturato Velo. I was lucky/jammy enough to nip over to the launch in Tuscany to find out more about the new tyres, and give them a quick test ride…

The Cinturato Velo will be available in 26, 28, 32 and 35mm sizes, with the respective weights being 290g, 320g, 350g and 380g. Pirelli break the recommended usages down into three main areas: road racing/training in adverse or difficult road conditions, fast commuting on roads/paths and light gravel/adventure riding… essentially an all-season road tyre with a bit extra. Cinturato Velo translates to 'belted tyre', which in a sense describes how they are made with two compounds for extra reinforcement. 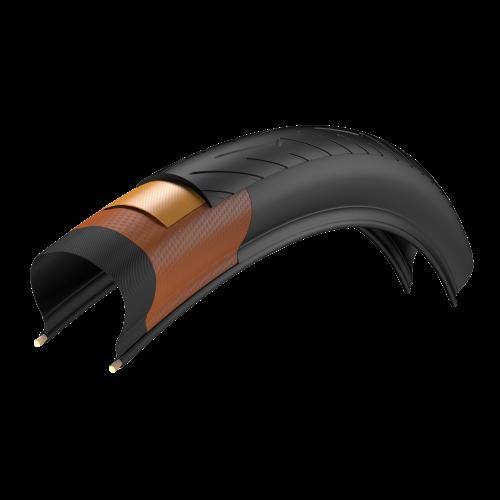 Pirelli have achieved the extra puncture protection with their new patented 'Armour Tech'. Aramid fibres are dispersed through the tyre and get thicker towards the underside, so the top layer still retains low rolling resistance and grip thanks to Pirelli's Smartnet Silica compound, while the base layer has a greater concentration of aramid fibres to guard against flats.
A nylon layer is used from bead to bead to protect against cuts and pinch flats while also making the tyre air tight when running it tubeless, while underneath the tread is an aramid fibre breaker belt. This is to stop sharp objects which might have bedded into the top layer from piercing right through the tyre.
Much research has gone into making the tyres fully weather-proof and high performing while also being easy to fit both with or without tubes. Most of this work involved coming up with an appropriate bead shape, and Pirelli say they have conducted extensive studies to ensure the tyres perform in both configurations. While Pirelli do actually get their tyres produced in France, the R+D and product testing of their technologies are in-house. 1,800 people were involved in developing the Cinturato Velo, and 92,000km were ridden on prototype after prototype before they arrived at the finished product. Being one of the largest tyre manufacturers in the world one thing Pirelli won't be short of is cash or resources, so it goes without saying they invest heavily in new products. At the launch event just outside of Siena, I was a little miffed to discover that we were actually trying the tyres with inner tubes; although with Pirelli claiming they work pretty much just as well with either set-up it would be interesting to see if that was the case, because dedicated tubeless tyres with tubes in definitely don’t feel quite right as anyone who’s done this will know. Pirelli also say their bead design means the Cinturato Velo is nice and easy to mount with tubes, so it would have also been beneficial to have a go at getting one on a wheel to assess fingertip damage… that will now form part of our long-term testing. My test bike was a 3T Exploro with a 1x Sram Force groupset, a 10/42 ‘dinner plate’ cassette, 42t front chainring and 3T Superghiaia flared handlebars; I didn’t totally get on with those bars and would have liked more oomph at the top end for descents on our test route; but that’s besides the point, we’re here to talk tyres…

The test ride group was made up of fellow journalists and some of Pirelli’s test team (the latter of whom are all pretty rapid) and the ride was not exactly at a sociable pace; although I’m not going to pretend I can make a judgement on these tyres based off one 20-odd mile adventure around the outskirts of Siena, which even took in some of the famous Strada Bianche white gravel sections, it did mean I got a sneak preview of what they’re really made of by trying to keep up with these cyborgs. No one got a puncture which was a start; and with the flat bit of said gravel section tackled at a pace of nearly 22mph according to Strava, if I was a betting man I wouldn’t have counted on the 15 or so of us emerging from that stretch without a flat if rode at the same speed on race clinchers. If it wasn’t so iconic it would have been unpleasant, but I could perceive that the 28mm width and extra protection on the Cinturato Velo tyres made things somewhat more bearable despite what was happening beneath me. This route packed in everything, with an early gravelly climb and later one with smoother tarmac, plus plenty of fast sections and descents. The first climb gave me a sense of the grip, which seemed to be as good as you could hope for on a rocky ascent. On the tarmac they appeared to roll like a decent all-season road tyre, and I’d be surprised if the rolling resistance was much worse than the likes of Continental’s Grand Prix Four Season or Pirelli’s own PZero Velo 4S. With their shallow tread pattern and no knobbly bits I guess you could say the Cinturato Velos would be gravel-lite in their 35mm guise, but not fully fledged off-road tyres. Overall it was a very good first experience, and after Pirelli’s PZero Velo silver and four season tyres both received favourable road.cc reviews last year, I wouldn’t have expected anything less. I think this tyre should really give you a versatile all-season option, and if they are just as good as regular clinchers with tubes (and easy to fit roadside) while also having the option to run tubeless, then I’d personally be sold on running them for my commuting bike. As with the first launch last year Pirelli were pretty coy on pricing, but as I understand it they won’t be much more than the PZero Velos which range from £39.90 to £45.90 (we'll update when we get confirmation).
I was sent home with a pair of 28mm Cinturato Velo tyres to review, so it goes without saying we’ll be long-term testing them to see how they cope over many miles…