Trek finally has a proper gravel bike, and it's not just a Domane with big tyres
by David Arthur @davearthur

Trek has finally joined the gravel and adventure bike market properly with its all-new Checkpoint, a carbon or aluminium bike packing the IsoSpeed decoupler from the Domane, and with space for up to 45mm tyres, umpteen water bottle mounts plus mudguard and rack eyelets, 12mm thru-axles and flat mount disc brakes. It's available only with Shimano 2x11 groupsets and costs from £1,450 to £3,500. Here's a first look.

The gravel and adventure bike category has been maturing rapidly in the last few years, the bikes that are constantly being launched are clearly finding favour with lots of road.cc readers. We might not have a lot of gravel or even a gravel racing scene here in the UK but we do have plenty of rotten roads that are almost gravel roads,  and for that reason there's a real appetite for wider tyres to provide extra comfort and traction. Plus we do have miles of byways, bridleways and other suitable places for getting off-road and mixing up regular road rides, and there are more events catering for these bikes like the Dirty Reiver, CX Sportives and Grinduro. Trek first showed its cards with the Domane Gravel, a slightly modified version of the company’s endurance bike but with wider tyres. It's fair to say we were all a bit surprised by the effort, but it now looks like it was a stopgap for real gravel bike enthusiasts before the arrival of the company’s first dedicated foray into this growing category, the all-new Checkpoint. Compared to the Domane Gravel, Trek says the new Checkpoint offers much improved off-road capability and general versatility, with bigger tyre clearance, adjustable dropouts and geometry and lots of accessory mounts the key differences. Why they didn't just launch the Checkpoint in the first place is anyone's guess.

“Trek’s entrance into the dedicated gravel bike market has been a long time coming. When we set out to design a gravel bike, we knew that simply modifying an existing platform wouldn’t be enough to exceed the expectations of the scene’s unique riders. With Checkpoint, Trek is proud to enter the market with an ultra-versatile, performance-oriented, and downright fun lineup of bikes in model options with something for every rider,” explains the company. 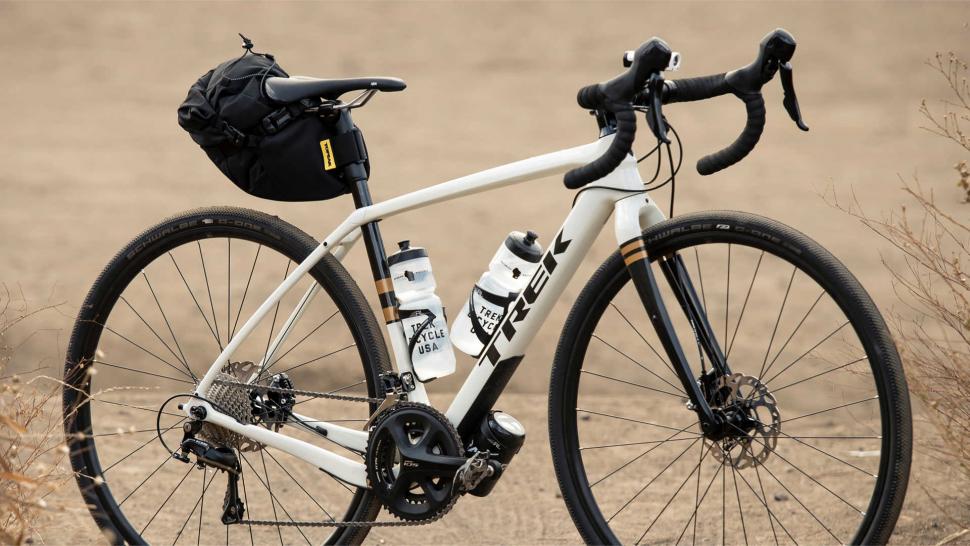 In developing the new Checkpoint, Trek identified typical users of gravel and adventure bikes, from someone who rides gravel to escape traffic and appreciates the versatility, to cyclists not interested in road bikes (mountain bikers, mainly) and the new breed of “ultra-endurance” cyclists flocking to events like the Transcontinental Race. And what Trek has developed is a bike that looks to take into account the many different applications that gravel bikes are being used for,  from commuting and touring to short distance gravel rides and multi-day all-terrain epics, with a versatile and adaptable bike.

To develop the new Checkpoint, Trek has clearly looked to existing bikes in its range, namely the Domane endurance bike and Boone cyclocross race bike, as a starting point, with a lot of borrowed technology. There’s nothing revolutionary on show here, no integrated springs or aerodynamic features, instead, it’s tried-and-tested stuff. 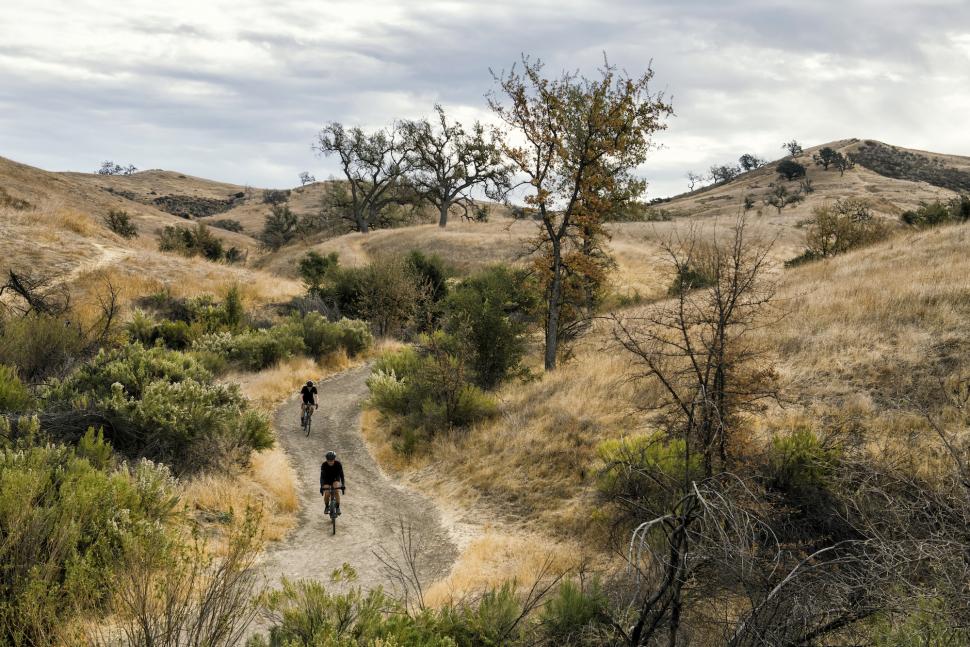 “Checkpoint is more than a modified version of Trek’s Crockett or Boone cyclocross bikes. Nor is it a new iteration of the Domane Gravel bikes introduced last year. Trek went back to the drawing board with this bike, developing a new geometry and pairing it with a quality spec that will that hold up for long, rugged miles on pavement, dirt, and even the most treacherous gravel roads,” explains Trek.

The key feature of the carbon version of the new Checkpoint is the IsoSpeed decoupler that first appeared on the Domane several years ago, and which has since found its way onto the Boone cyclocross bike. Trek has decided to skip the IsoSpeed on the aluminium Checkpoint to keep the bike affordable. 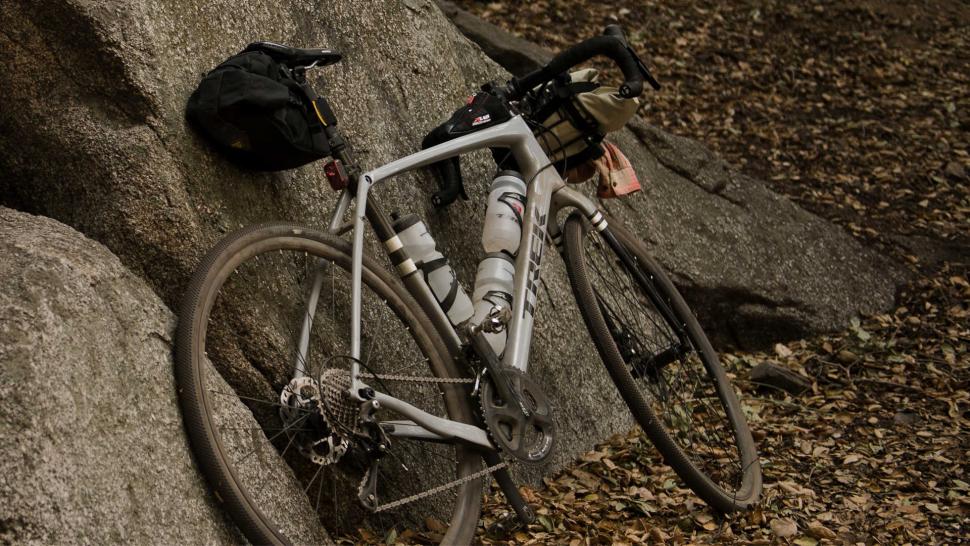 To refresh your memory on what exactly the IsoSpeed decoupler is, it simply allows the seat tube to move independently of the top tube with the decoupler controlling its range of movement, providing fore-aft saddle movement intended to help smooth out the harshness felt when riding over rough terrain. Trek doesn’t provide a figure for the amount of deflection the system allows, but on the original bike it was in the range of 30mm of compliance.

It’s not the adjustable IsoSpeed of the newest Domane SLR models launched a year ago, but the non-adjustable version specced on the original models.

It would seem to be a missed opportunity not to provide the adjustable IsoSpeed decoupler of the newer Domane so you can tune it to the terrain you’re riding on. It also seems odd not to incorporate the front IsoSpeed of the newer Domane on the Checkpoint as well, but it seems Trek thinks the bigger tyres provide ample compliance that the extra tech isn't needed.

The Checkpoint is offered in carbon and aluminium versions. The carbon SL frame weighs a claimed 1,240g with a 470g fork, the aluminium frame weighs 1,570g with a 600g fork. Fork weights are with a 300mm steerer tube. The geometry of the new Checkpoint has largely been lifted from the Boone, with a nearly identical reach and the same wheelbase and chainstay length, but it has a slightly taller stack and lower bottom bracket to provide better road handling manners.

However, the new Checkpoint has a nifty trick up its sleeve. Trek has given the new Checkpoint the same Stanglehold dropouts found on its Crockett and Stache bikes to provide adjustable geometry. The wheelbase can be changed from long and stable to short and lively, the former better for long rides and bikepacking, the latter for gravel racing, according to Trek. It also offers the opportunity to ditch all the gears and go singlespeed.

Of the new geometry, Trek says: “The new dimensions are comfortable over the long haul and on rough roads but remain aggressive enough to provide the speed and responsive ride-feel most gravel riders are looking for.”

What does the geometry actually look like? Here’s the chart for the six frame sizes: The Checkpoint has been designed to cater for tyres up to 45mm, with production bikes specced with 35mm . Trek says 28mm tyres can also be fitted, providing a wide range of uses depending on the sort of riding you have planned for the bike. While many brands are offering 650b compatibility, Trek has designed the Checkpoint solely for use with 700c wheels and doesn’t recommend 650b wheels at all.

To provide the necessary tyre and chainset clearance, the driveside chainstay has been dropped, much like the Open UP and a host of imitators. Other key details include 12mm thru-axles and flat mount brakes, with ‘Control Freak’ internal cable routing. There’s also a plastic bash guard on the lower portion of the down tube, a familiar feature on mountain bikes but not something that has been applied to adventure and gravel bikes. The bike has long distance rides catered for, with Trek seriously considering the needs of bikepacking enthusiasts, as the frame is adorned with loads of mounts. There are four bottle cage mounts on the frame, three inside the front triangle with an extra one on the bottom of the down tube. The top SL models also get a top tube mount for attaching a small pouch for food or other essentials you need quick access to.

Versatility is a key appeal of adventure bikes, and the Checkpoint will take mudguards and rack mounts, with lowrider fork mounts for fitting a front rack and bag. You could fit extra water bottle cages to the fork legs if the four on the frame isn’t enough. All these mounts should ensure the bike can be used for everything from commuting to epic distance off-road adventures.

The Checkpoint range consists of seven bikes in total, with three women’s bikes and a choice of aluminium or carbon frames, priced from £1,450 up to £3,500.

Trek has focused on providing full Shimano groupsets with its own Bontrager TLR tubeless-ready wheels and 35mm Schwalbe G-One tyres. That Shimano focus means there are no 1x11 offerings in the range, with all bikes fitted with double chainsets.

It’s striking that Trek hasn’t gone all out with a super high-end build such as Specialized with its ultra bling £8,500 S-Works Diverge. Trek is clearly focusing on affordability and accessibility with the new range. The SL and ALR framesets can be purchased separately so there’s always the opportunity to build your own bike. 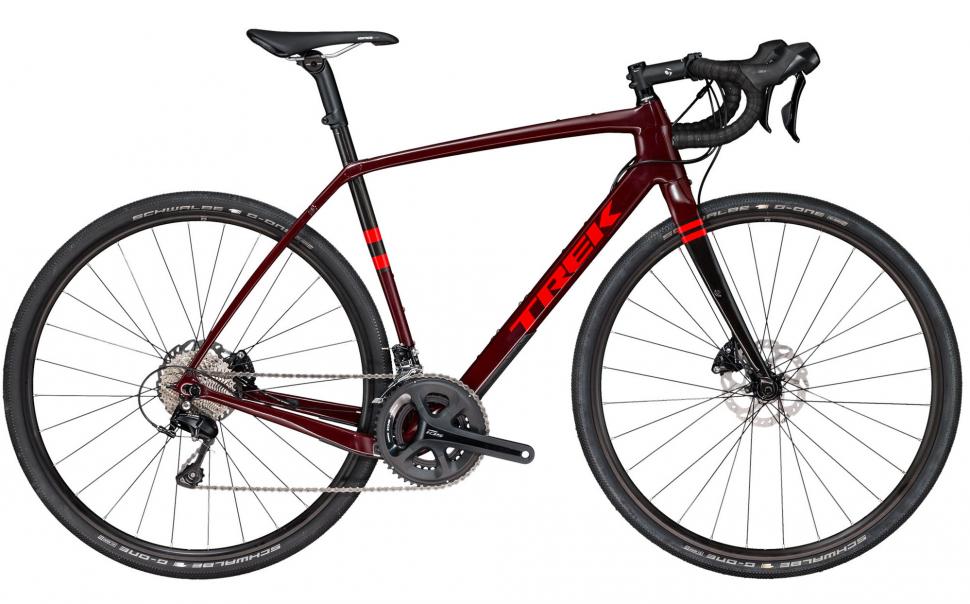 The Checkpoint SL5 Women’s (£2,700) is the same bikes but differs by way of the Ajna saddle, a narrower handlebar and a different paint finish. Stepping down to the aluminium offerings, the Checkpoint ALR5 (£1,700) combines a 300 Series Alpha Aluminium frame with a carbon fork, Shimano 105 groupset, Bontrager TLR wheels and Schwalbe G-One tyres. The Checkpoint ALR 5 Women’s costs the same and uses the same frame and components, but a narrower handlebar and different saddle. Bikes are available to buy now and we’ll have a first ride on the new bike early next week. More info at www.trekbikes.com/uk/en/