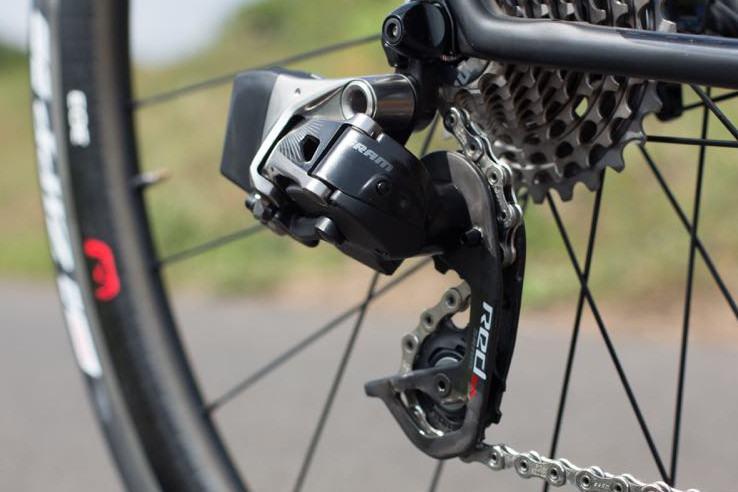 Is a SRAM eTap 1x12 groupset coming this year?

Patents and Instagram pic shows development of Eagle eTap groupset, which has implications for road and gravel bikes
by David Arthur @davearthur

Is SRAM eTap Eagle 1x12 coming this year? Leaked photos and fresh patents strong hint at that being the case. Of course, you don’t have to be any sort of Mystic Meg to recognise the attraction of SRAM both bringing its wireless eTap technology to the mountain bike world, and in the process providing a wireless 1x12 groupset for road and adventure bikes.

And with the Aqua Blue Sport team riding the mould-breaking 3T Strada aero race bikes, a bike designed solely around 1x groupsets, the American company has the perfect test bed and showcase for any electronic 1x groupset it wanted to launch. We’d expect it to be a massive hit with gravel and adventure bikes too. Our only hint that SRAM is working on combining its wide-range 12-speed Eagle mountain bike groupset and its eTap wireless technology comes from a photo shared by Scott pro mountain biker Nino Schurter (one of which has just been taken down, but the other clearly shows an absence of a rear mech cable) and backed up by a patent that has been unearthed by some eagle-eyed journalists over on the Continent.

The patent has been filed for an electromechanical rear derailleur and the attached picture clearly shows an eTap battery, complete with the battery on the back of the derailleur, fitted to a frame with a wide range cassette.

That makes it very clear that SRAM is intending to launch a mountain bike version of its eTap rear mech that is compatible with its huge 10-50t 12-speed cassettes that allow its so-called Eagle groupsets to offer a 500% range, almost matching that of conventional double chainring groupsets.

As anyone knows, SRAM’s Force and Rival road and adventure groupsets are simply modified mountain bike groupsets, with all the same technology including clutch-style rear mechs and chainrings with narrow/wide teeth. What it hasn’t yet done is port its Eagle technology over to the road market, but maybe that’ll happen with the launch of this new groupset.

When that launch happens is anyone's guess. Obviously, SRAM isn’t revealing anything at the moment, but there are a couple of shows and events where such an announcement could happen. So we’ll be paying close attention to Sea Otter, Eurobike and UCI World Cup mountain bike races.

Our pals over at off.road.cc have a more detailed look at the patent and its implication for mountain bikers here if you’re interested in reading more.