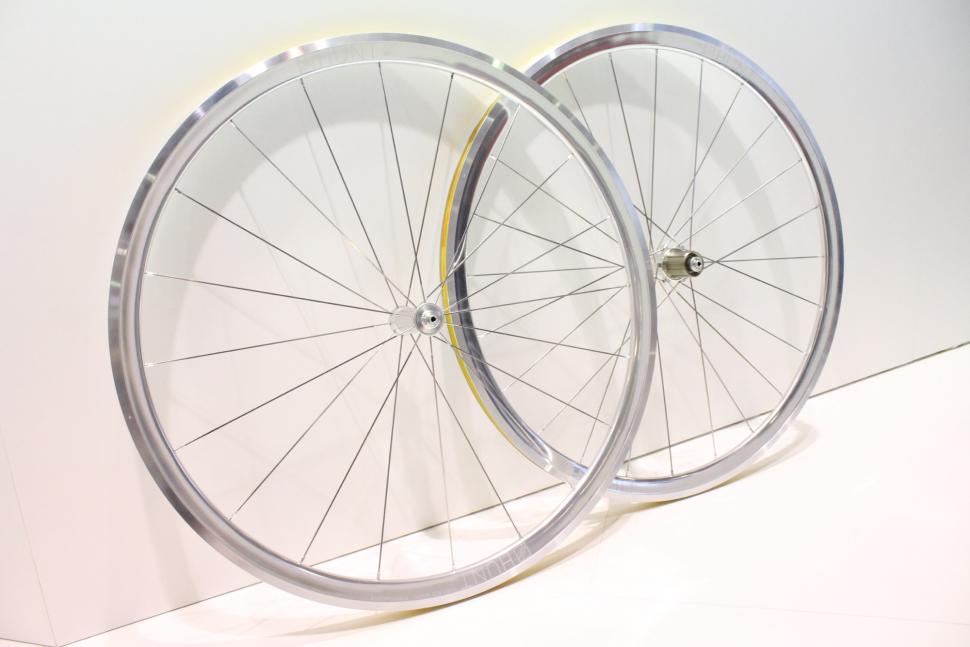 If you're thinking about getting yourself a new set of wheels, we've done the legwork for you. Here are some of the most interesting 2018 models that we spotted at last week's Eurobike show.

It's a busy time in the wheels world with brands offering ever more options for disc brake bikes, including gravel bikes, and updating their aerodynamic designs. Mid and deep section wheels are still in the ascendancy, and carbon is very much the material of choice at the higher levels.

One notable absence from our round-up is Mavic which didn't attend Eurobike this year. If you're particularly interested in Mavic's 2018 range, check out our story from last month.

We told you just before Eurobike that Zipp has announced a total of eight new disc-specific, tubeless compatible wheels. These are the top-end 808 NSW carbon clincher disc wheels. They’re the same depth as the rim brake version – 82mm – with a 19mm internal width, and they aerodynamically optimised for 25mm tyres. You’re looking at £2,710 for the pair. Zipp is also releasing four new Firecrest carbon clincher tubeless disc brake wheelsets. This is the 303 650b version with a 584mm bead seat diameter (compared with the 622mm diameter of a standard 700c road rim). Zipp’s thinking is that you’re likely to put bigger tyres on a bike you’re riding on anything but asphalt, and the overall diameter of a 650b wheel plus a chunky tyre is similar that of a 700c wheel with a smaller road tyre. These are £2,200 the pair.

Lightweight is introducing a Meilenstein Disc clincher wheel with a disc-specific rim – there’s no brake track – that’s wider than previously. The external diameter is 24mm, designed to provide better support for the wider tyres that most people are using these days. The hub shell is half round and half pentagonal, the idea being to improve safety and reliability by providing a mechanical lock between the hub and the rest of the wheel, while distributing the one-sided braking forces from the disc rotor. The Lightweight Meilenstein C Disc  wheels are far from cheap, though. You’re looking at £4,600 for the pair.

DT Swiss has revealed two new Cross Road disc brake wheelsets that are said to have been influenced by cyclocross but which have a broader application for gravel and adventure bikes. 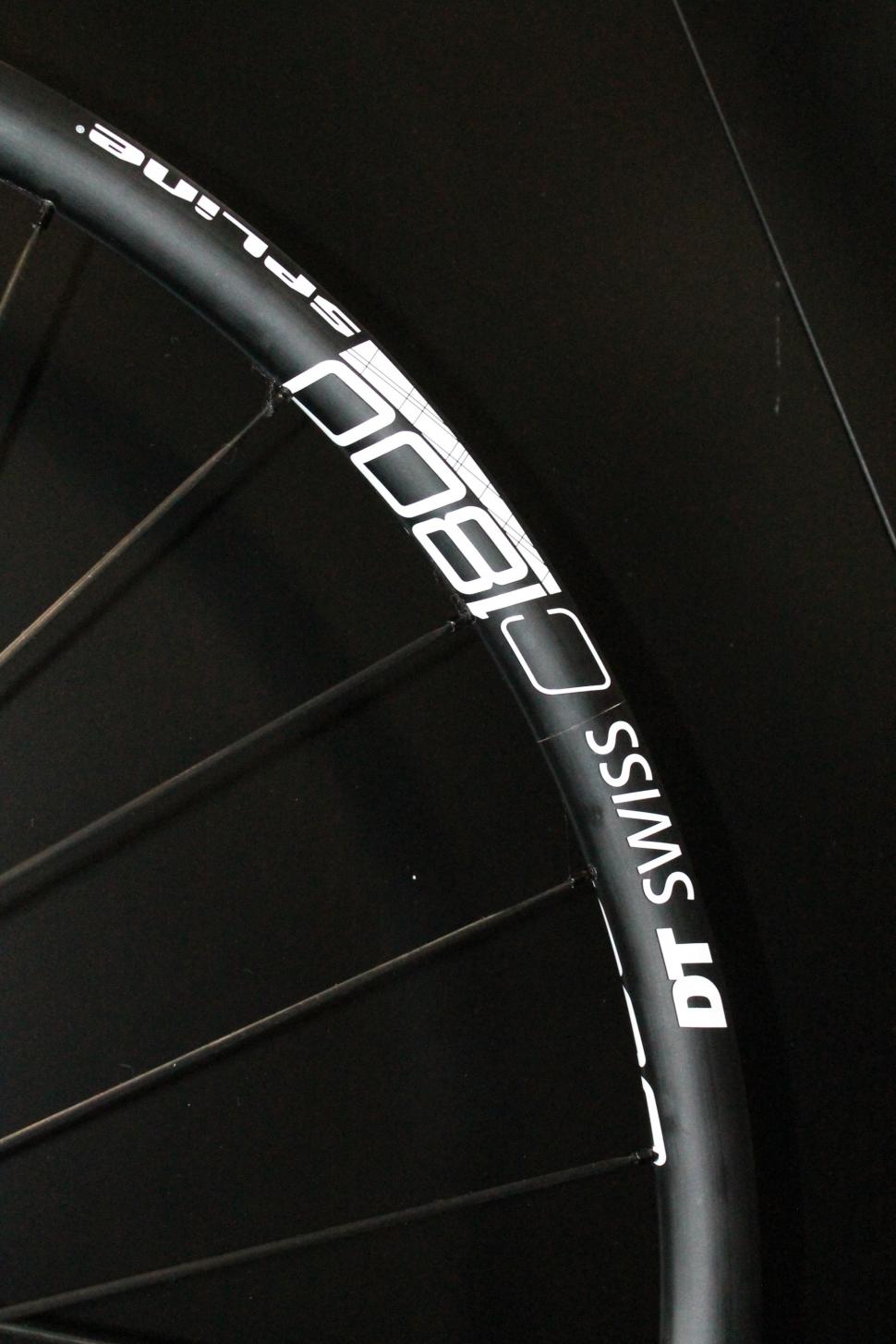 DT Swiss says that both of these have more of a focus on durability than on light weight. 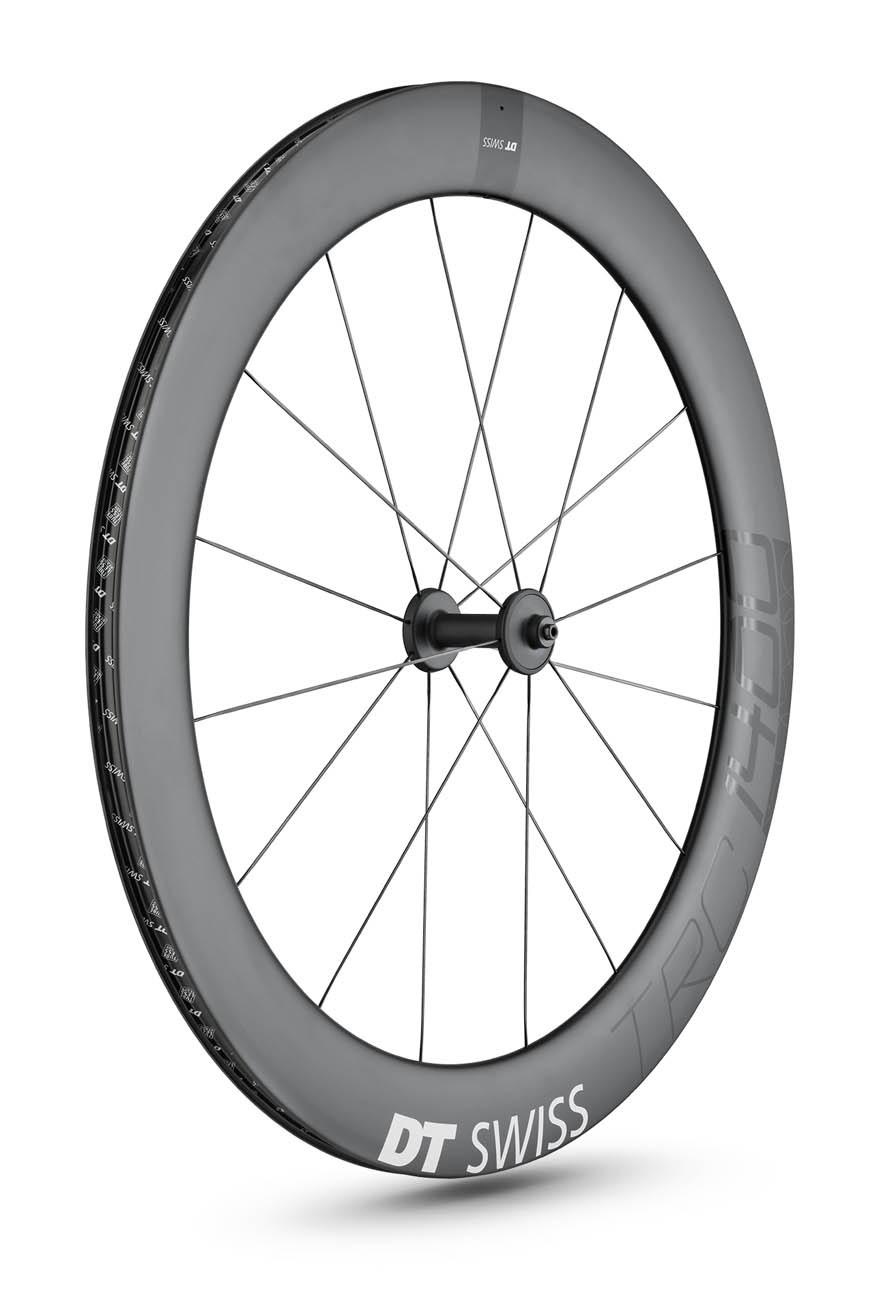 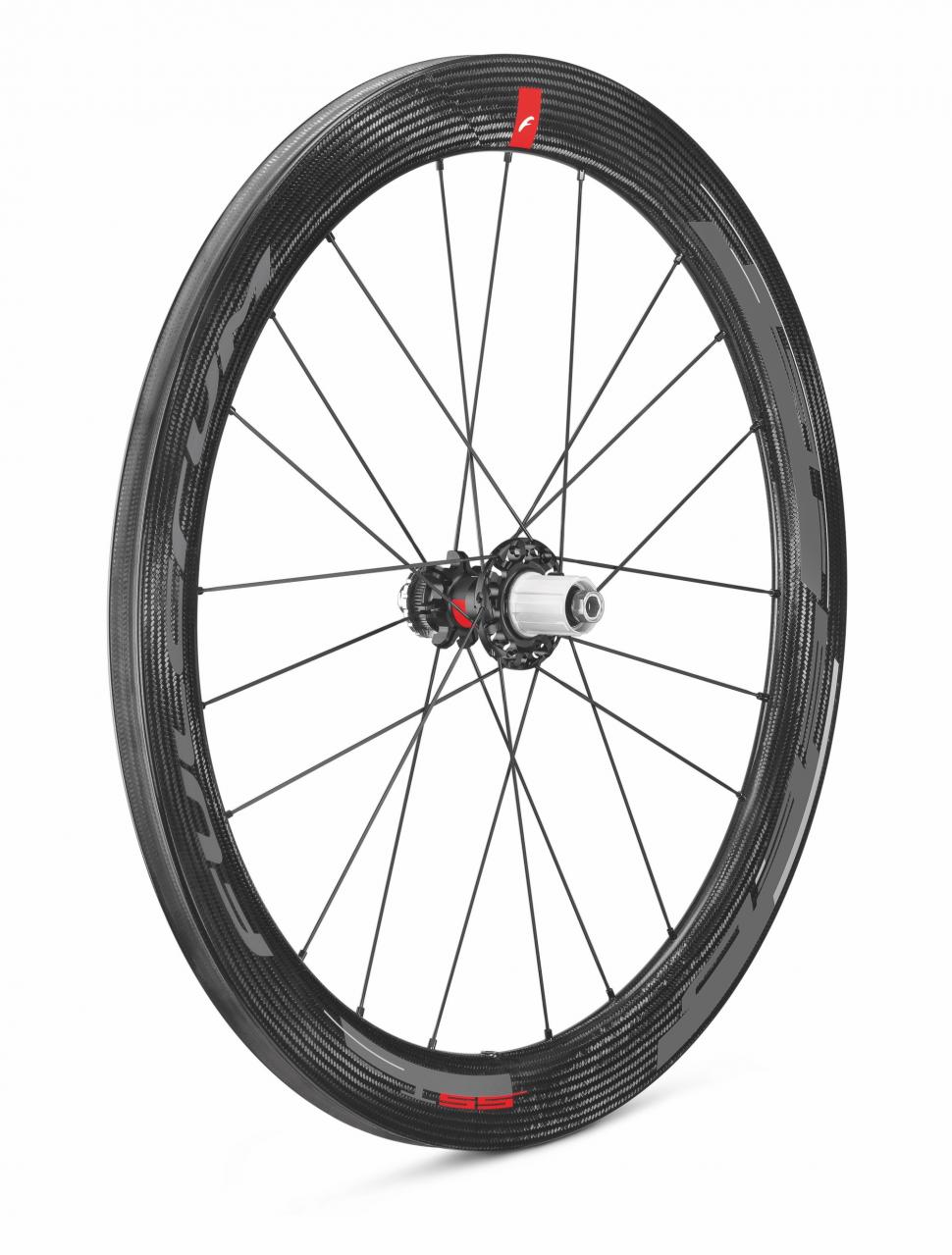 The Fulcrum Speed 55T DB is a carbon-fibre disc brake wheelset for tubulars that’s intended for racing. The rim is 55mm deep with an 8mm-wide nose – in other words, it has a blunt edge on the spoke side – and a mid-profile width of nearly 26.5mm, the idea being to work aerodynamically with 25mm-wide tubulars fitted.

The front hub is carbon while the rear is aluminium, chosen to handle the opposing forces of the drivetrain and the disc brake, according to Fulcrum.

Fulcrum gives a wheelset weight of 1,395g. The Fulcrum Speed 55T DB will be available in March 2018. 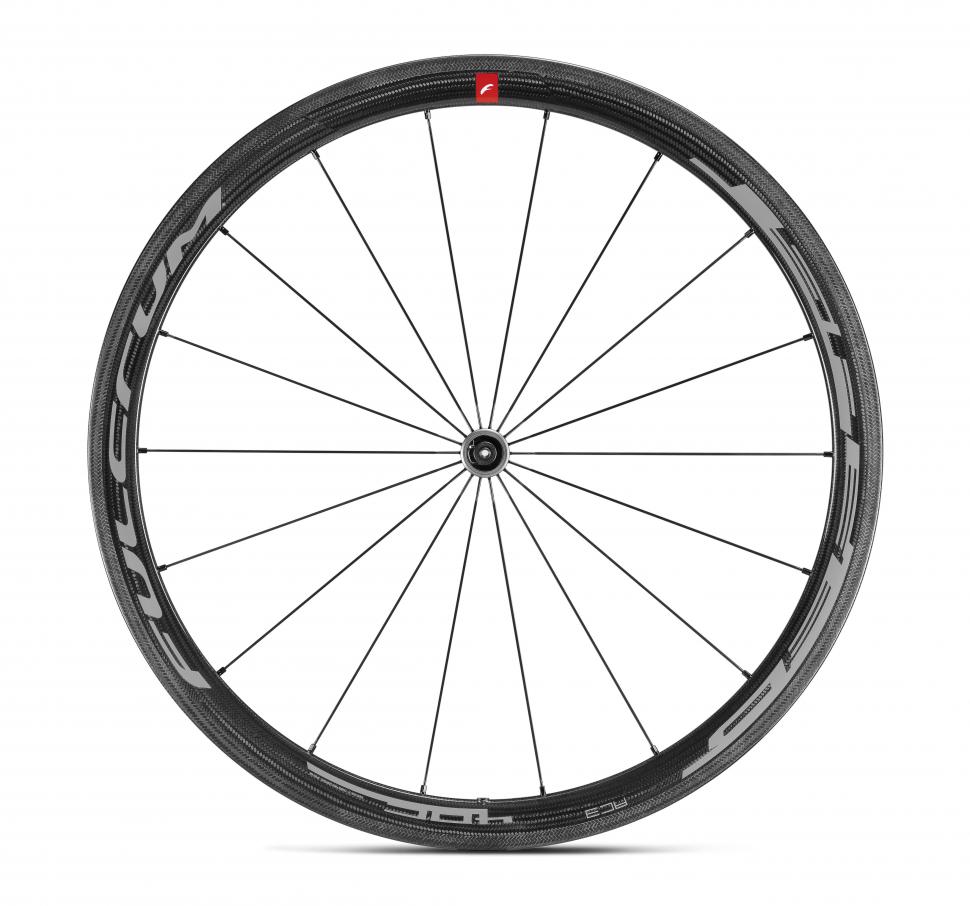 The Speed 40C (above) and Speed 55C rim brake/ clincher wheelsets are already out there, the figures indicating the rim depth in millimetres. These each come with carbon fibre rims with a 17mm internal width.

Fulcrum claims that the longitudinal twill design of the fibres results in a “stronger yet more elastic complete final structure” that’s capable of absorbing road vibration.

The wheels have the Fulcrum/Campagnolo AC3 (All Conditions Carbon Control) treatment which removes resin from the surface of the brake track, improving their stopping performance.

Fulcrum has also announced a new version of the popular Racing 3 aluminium clincher wheelset that will be available from December. 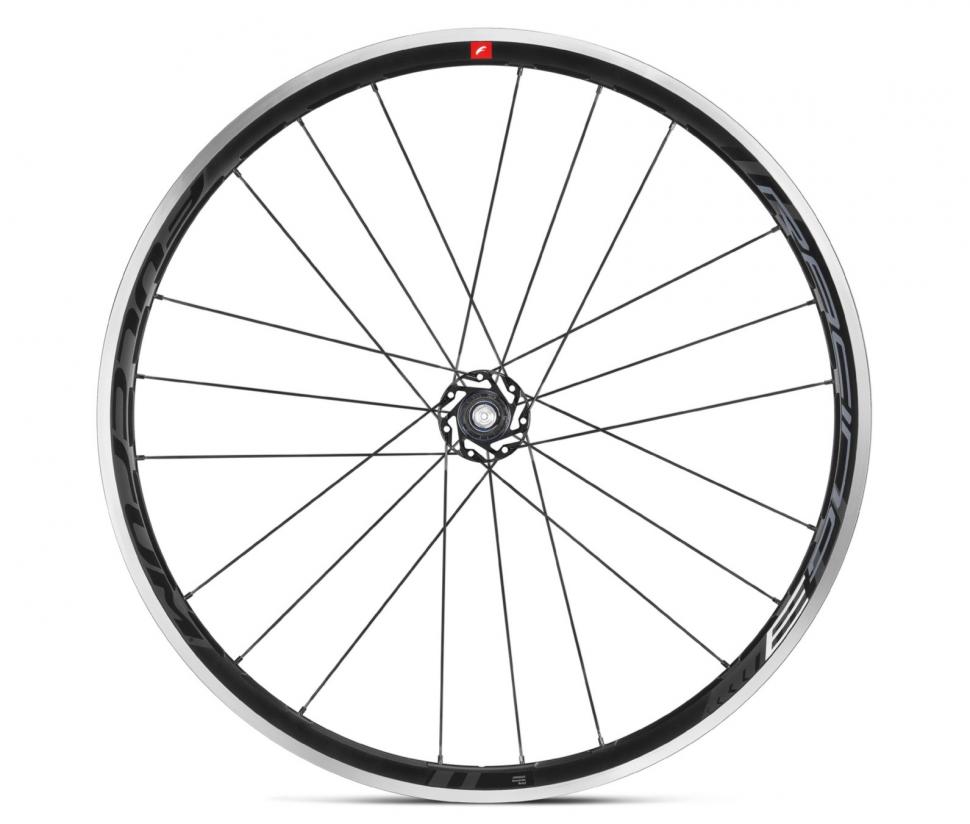 What’s new is a triple milled T6, pre-aged aluminium rim that comes in a new 17C format (with a 17mm internal width, rather then the 15mm width of the previous version). Fulcrum says the wider rim is optimised for 25mm and 28mm tires.

The rear rim has a depth of 30mm while the front is 25mm the idea being to provide stable handling in crosswinds.

The hub flange has been redesigned and you get aero-shaped, straight-pull, stainless steel spokes. Fulcrum claims a wheelset weight of 1,560g, which is highly respectable. 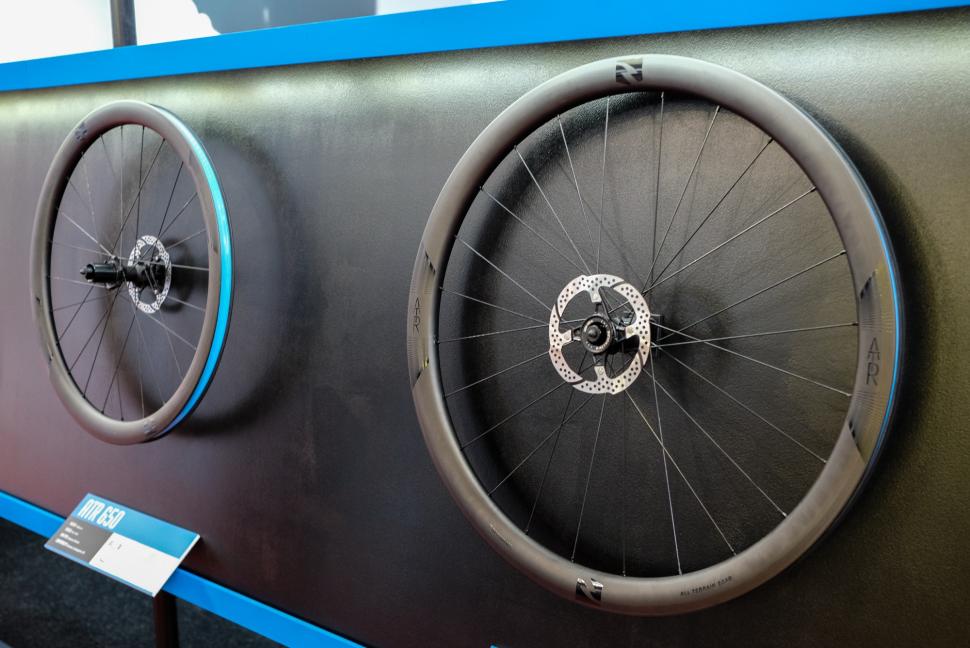 Reynolds has replaced its ATR (All Terrain Road) carbon wheels aimed at adventure and gravel bikes with a new version available in 700c and 650b sizes, and featuring a wider and deeper profile rim. 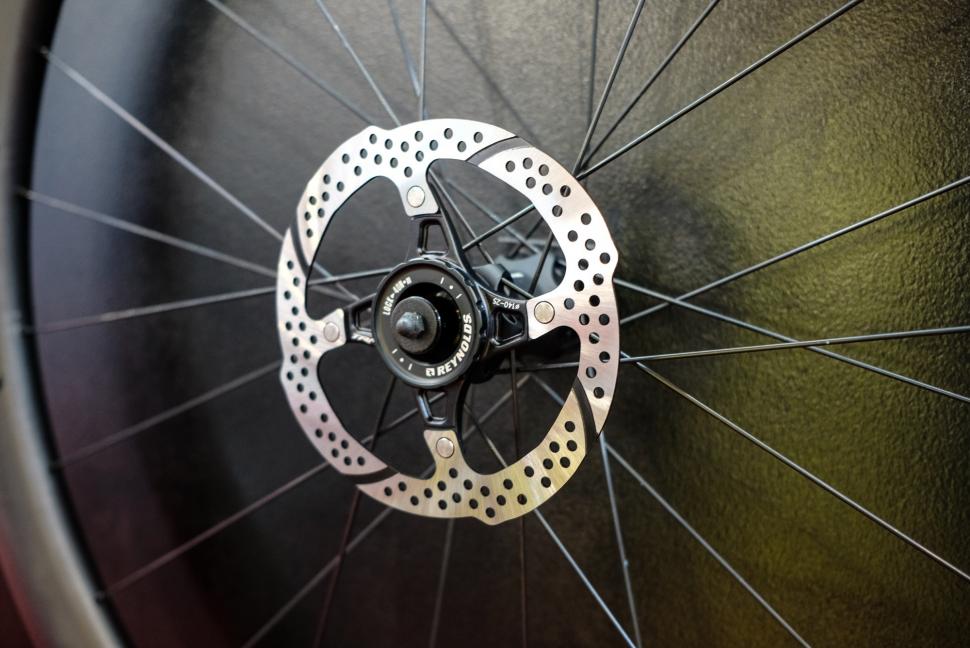 The previous ATR wheelset, which Dave Atkinson really liked when he tested them, by the way, had a 29mm wide and deep rim. The new ATR boosts up to 32mm wide with a 23mm internal width, and grows to 40mm deep. Tubeless compatibility still features with a hooked rim profile, and 24 spokes are used in the front and rear wheel for a claimed 1,620g weight for the 700c hoops. That’s a bit of an increase over the 1,510g weight of the older ATR wheels but the focus has been on ensuring maximum durability and strength for the increasingly tough and rough riding that some are doing with the latest generation of gravel and adventure bikes. 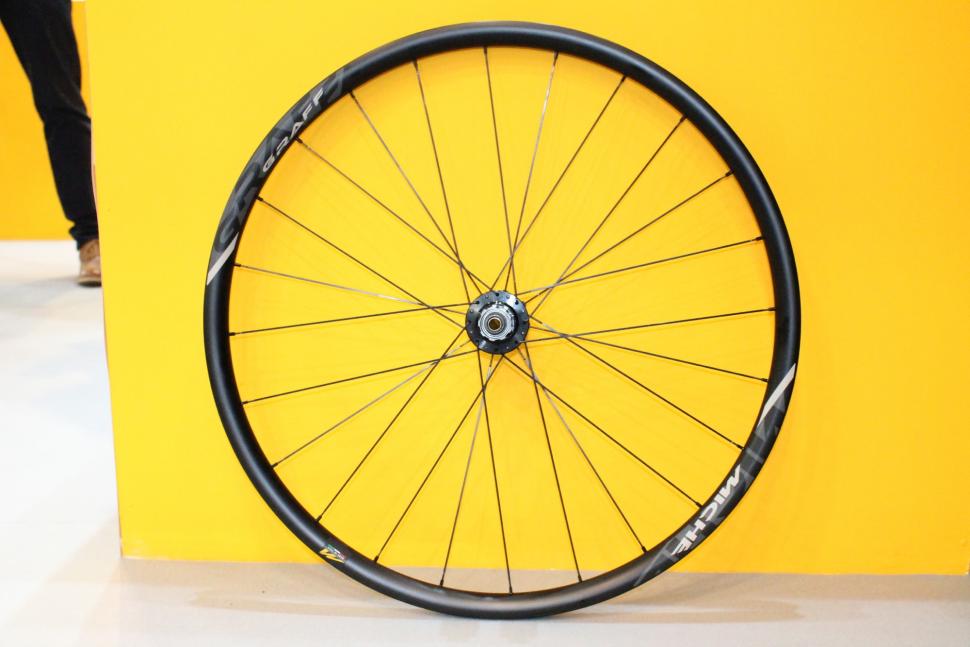 Italy’s Miche has a new adventure/gravel disc brake wheel called the Graff that borrows a lot of engineering – bearing housings, for example – from its mountain bike range. 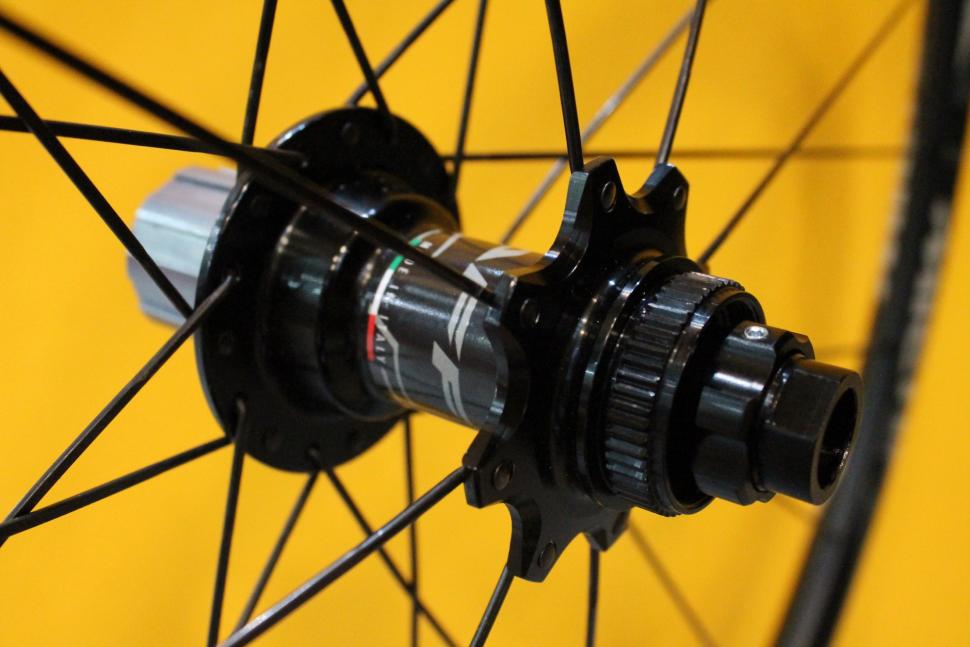 Miche says that it was looking for a lightweight wheel that’s also robust, and it says that it has chosen the spoking for rigidity, with minimal torsional flex during braking. 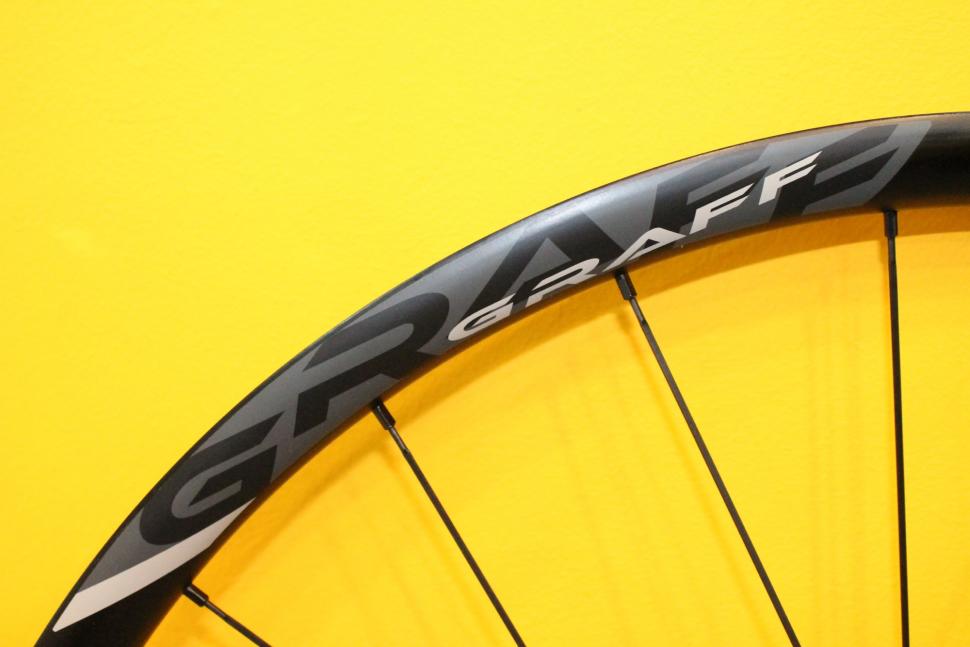 The Graff has quite a bulbous rim shape, 22mm deep with a 19mm internal width. It’s said to work best with tyres from 32mm to 38mm wide. Although the rims aren’t officially tubeless ready, we suspect you could run them that way (all of Miche’s SWR wheels are now tubeless ready). The complete Graff wheelset weight is 1,680g.

Hunt has its new Sprint Aero Wide rim brake wheels available in a shiny aluminium finish. The rims are 31mm deep and 24mm wide and they’re laser etched. They have a very cool retro Campag look to them.

The rear wheel has a fast pickup after coasting. There are 48 teeth on the ratchet ring so the pawls engage in just 7.5°. The wheels will be available in just this finish for the first few months and are priced at £449.

Hunt’s Aero Light Disc wheels now have upgraded hubs that are similar to those of the Sprint Aero Wide wheels – but in disc format, obviously. Hunt has moved away from carbon hub bodies to aluminium, saying that carbon didn’t make a huge difference to the performance. The flange height is slightly higher than previously. You can run these wheels with a standard quick release or 12mm thru axles, but not with 15mm thru axles any more (that would mean having a larger hub shell or using smaller bearings and Hunt didn’t want either). The rims are 28mm deep and 22mm wide. The price remains £469. 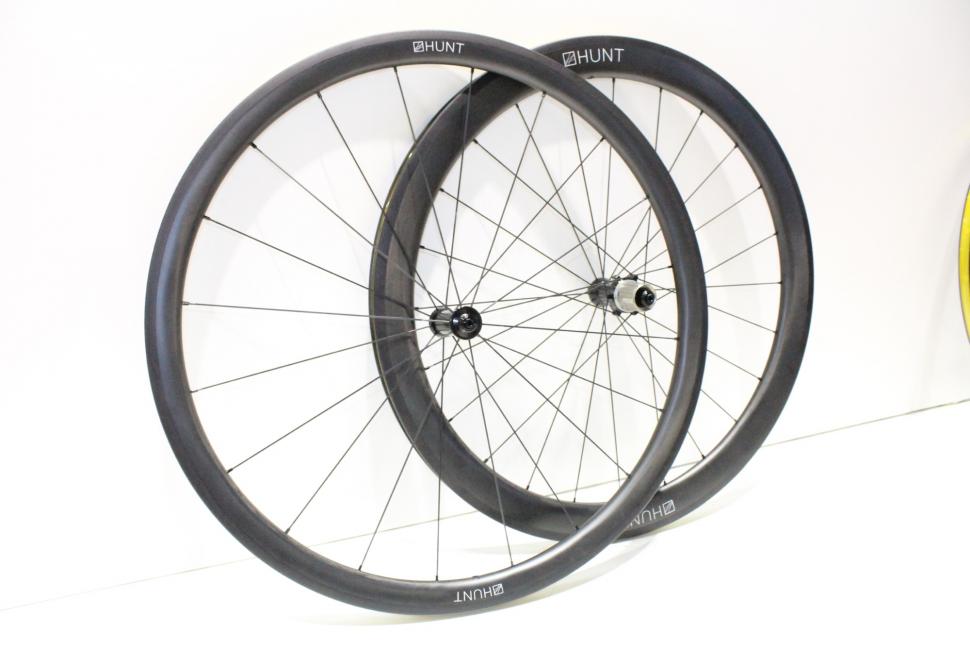 The other option is to mix them up with a 36mm-deep front wheel and a 50mm-deep rear wheel, the idea being that you get an aero benefit without adversely affecting handling.

The rims all have an external width of 27.4mm and an internal width of 20mm, they’re all tubeless ready and are available in both rim brake and disc brake versions (weights above are for the rim brake models). Token had initially intended to add a 72mm-deep wheel to the lineup but couldn’t design one to be more aerodynamically efficient than its existing 90mm-deep wheel, but it achieved that goal by moving up to 76mm.

The rims use what Token calls Conti Fibre technology, meaning that a continuous sheet of carbon-fibre is used from one side of the rim through to the other. This is said to produce a structure that’s uniform and symmetrical. 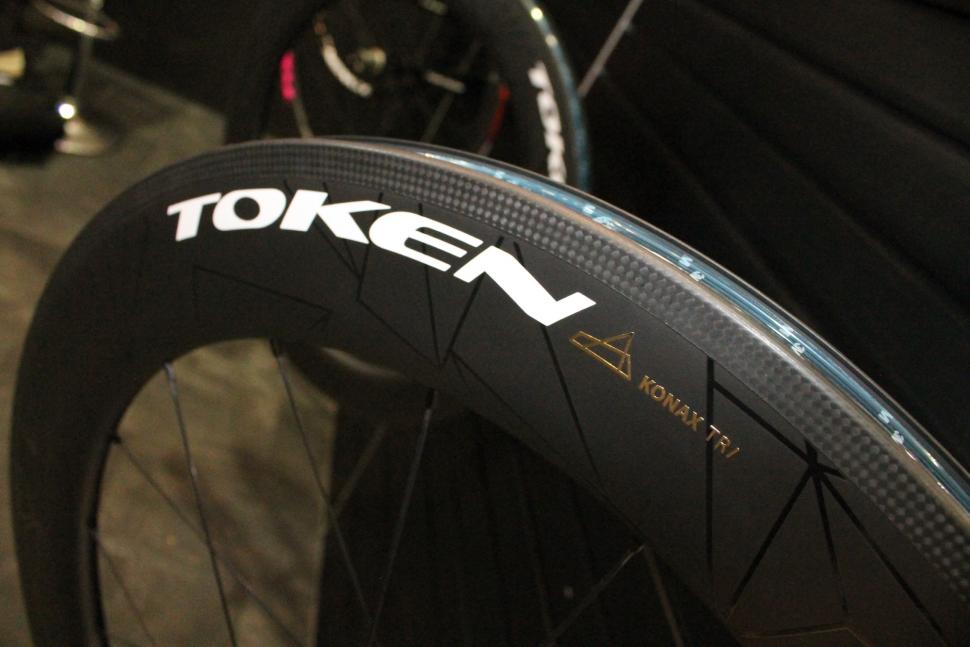 “Excess material overlap and human error are eliminated, so the rim structure has virtually no weak point,” says Token. “This results in not only a lighter, but also a stronger rim.”

The Z1 hubs have larger bearings than previously while the weight remains the same. The flanges have been pushed further apart, both front and rear, and Token says that this has increased stiffness despite the rear wheel having dropped from 24 spokes to 21. The little grey triangles you can see towards the top of either side of the cross section are foam shoulders that mean the carbon fibre curves gradually around the bends rather than at a sharp angle which would compromise its strength.

Token has decided not to publish aerodynamic data relating to these wheels but claims that the results are close to those of the best known aero wheel brands. 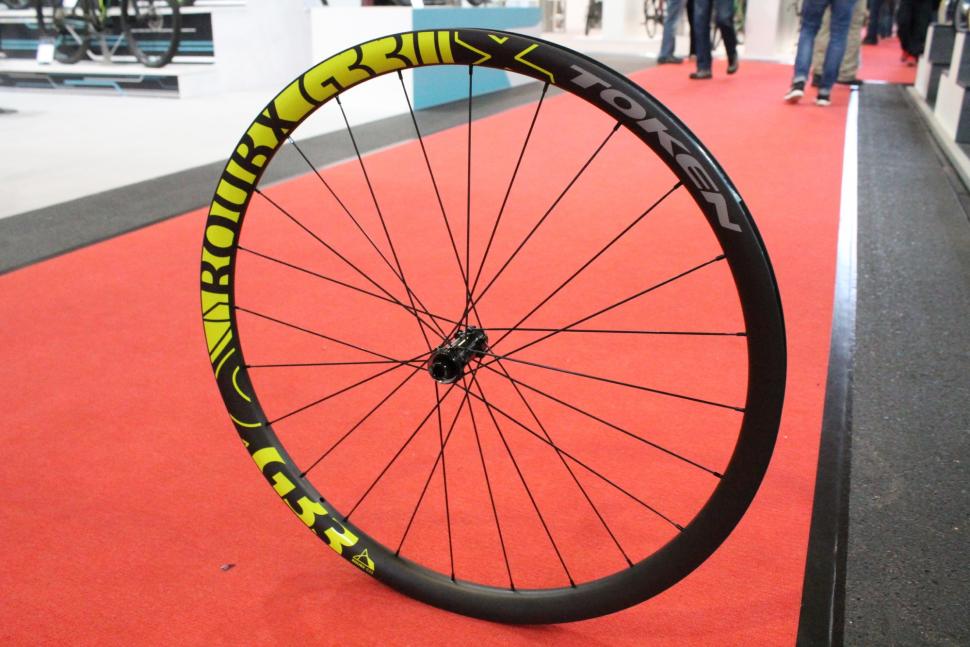 The final new wheelset from Token is the RoubX, intended for gravel, cyclocross and cross-country, and it uses the same Conti Fibre tech. It’s hookless and tubeless ready and Token says it’ll support any tyre from 700C x 30mm to 29in x 2.1in.