Charge Bike’s iconic Plug has gone through many changes during its lifetime, but for 2018 it returns to a Tange steel frame with space for wide tyres and disc brakes. As well as returning the Plug to its frame material roots, the Somerset-based company has launched the coolest new bike we’ve seen in ages, the Cleaver.

The Plug has a long history. It was launched in 2006 at a time when the fixed wheel trend was at its peak in London. It was the bike to be seen on - unless you were on the equally iconic Specialized Langster. As the fixie scene slowed, Charge moved the Plug in a drop bar direction (though it always kept a fixie option in the range) eventually incorporating the Juicer and Filter, the company’s two dedicated road bikes, into the Plug range. In 2016 Charge gave the Plug range a massive overhaul and switched frame material to aluminium, along with increasing tyre clearance with a view towards the growing trend for wide tyres and off-road drop bar riding, commonly called adventure riding. 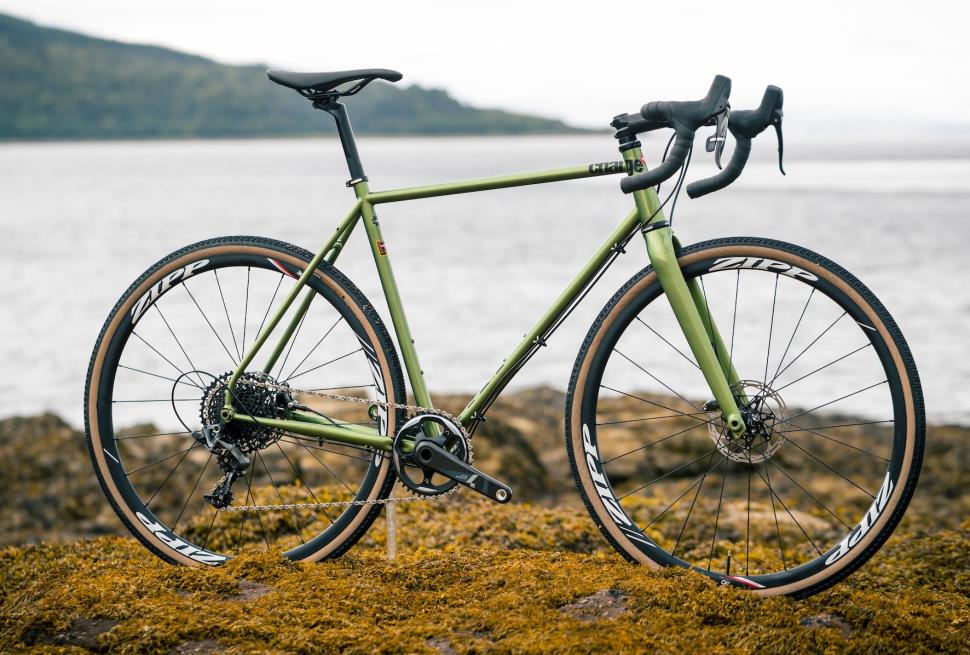 The move back to steel feels right for a brand that has always favoured the skinny tubes, the company reckons steel is what people know Charge for. But producing a stiff and lightweight steel frame is a challenge; the previous Prestige Tange tubeset on the 2014 model year Filter and Juicer apparently pushed skinny steel to its limits, and was much of the reason behind the switch to aluminium in 2016. Steel tubing has developed much since then though, and Charge settled on Tange, a tubing supplier it has a long history with, opting for Champion, a tubeset it felt delivered the necessary performance attributes.  There’s some good reading on the history of Tange here.

The Plug’s return to steel is good timing. There has been a lot more interest in steel road bikes in recent years with the number of bespoke frame builders across the UK testament to the undying attraction of a classic steel frame, despite the performance benefits of aluminium and carbon fibre. Refreshingly, Charge isn’t really giving the new Plug a label as such, just that it’s a drop bar road bike that can handle a bit of everything. There’s space for up to 42mm tyres on 700c rims and it’ll take a 650b wheelset too, so there’s scope for taking it down a gravel and adventure route if that’s the sort of riding you’re into. Charge says it has worked to ensure the geometry will satisfy a broad church of drop bar cyclists, from road warriors to gravel grinders. It sure looks like a lot of fun. The Kenda Flintridge tyres are a clear indication of the sorts of riding Charge sees the new Plug being used for. It has a smooth centreline tread pattern for fast rolling on the road, with angular shoulder knobs for off-road cornering traction. There are some very nice details on the new Plug frame. Charge has decided to use a tapered head tube with an external headset. External too is the 68mm threaded bottom bracket. Cable routing is also external, making for easy maintenance. Thru-axles are 12mm front and rear with flat mount for the disc calipers. Added versatility comes via rack and mudguard eyelets. 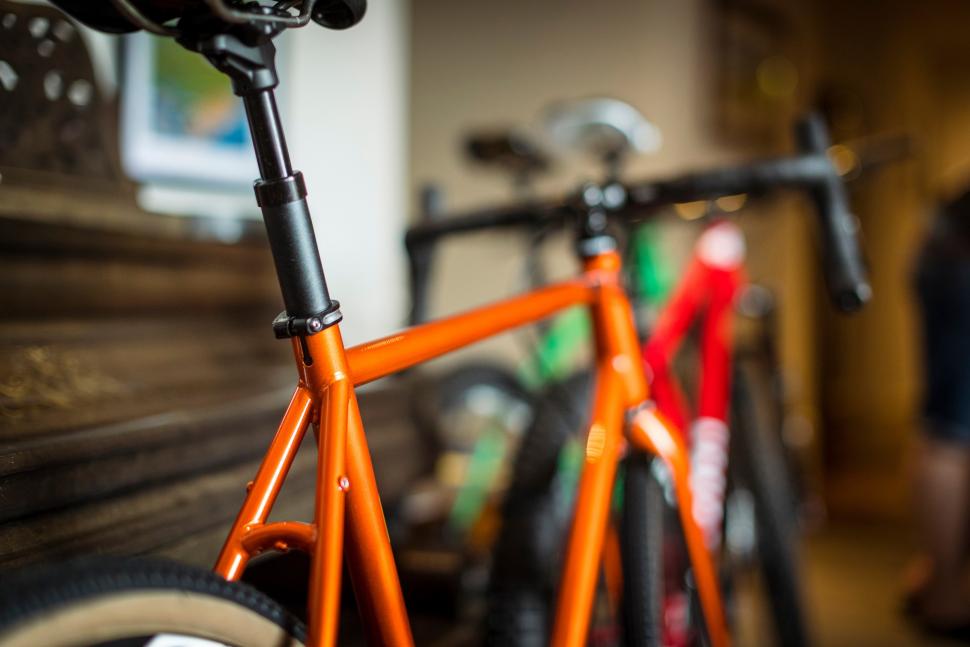 At this stage the company hasn’t finalised specifications and prices, that information will be unveiled next January when the 2018 bikes will actually be available. We do know there’ll be three complete bikes and a singlespeed version based loosely on the bikes you see in the photos but expect some changes as they put the bikes through final testing. Do though expect lots of SRAM and the Promax suspension seatpost on some models. We’ve seen Specialized add a dropper post to its new Diverge but could a return of suspension seatposts be ideal for the growing adventure and gravel riding market? We reckon it might.

Cycling can sometimes seem a very serious hobby. The Cleaver is all about fun. It’s an odd looking bike with an interesting story behind its development. It was born from Nick Larsen’s Hack Derby bike built he built himself at the Bicycle Academy a couple of years ago, a simple clunker/hack bike that is evocative of the simple joy of skidding and hooning around on a bike with few frills. The Hack Bike Derby, and you can see the video here, was an invitational event for 17 frame builders to race homemade hacked klunkers, a nod to the original mountain bikes raced in California back in the 1970s. 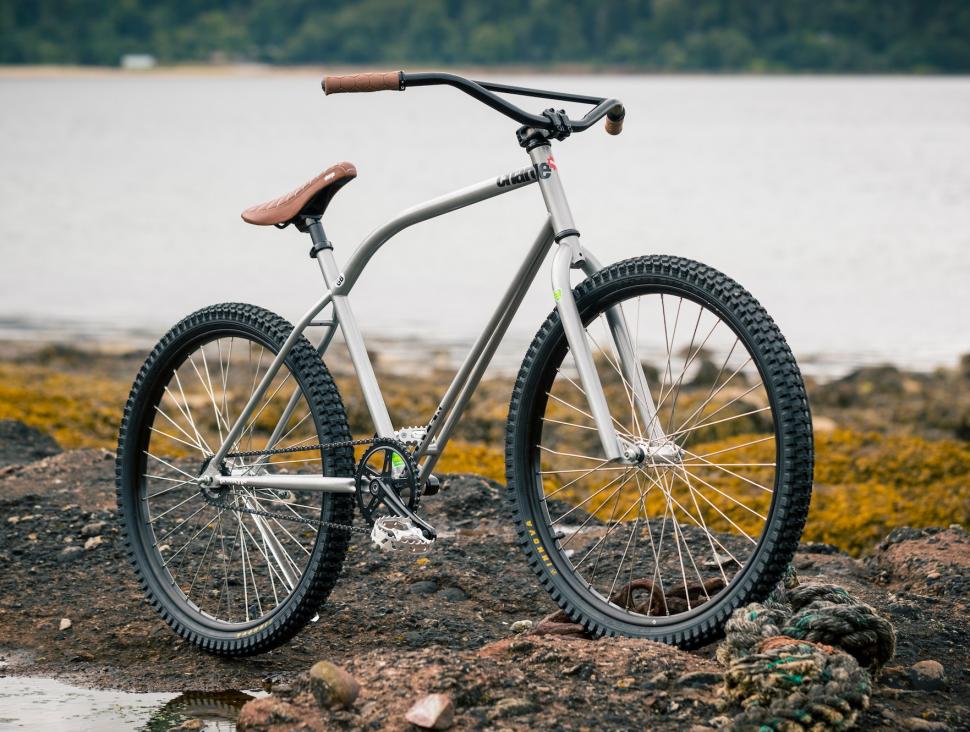 So much fun was it that the Cleaver was born with the intention of providing an accessible entry point to cycling, ideally suited for people wanting to ride around towns and cities or a second bike for that person seeking an upright riding position for bombing around on. Charge sees the Cleaver as the modern version of the Plug fixed wheel bike, a bike for people that don’t call themselves cyclists and just want something simple and easy to ride they can hop on and scoot down the road to college or the office. The £399 price certainly makes it a bit more accessible. 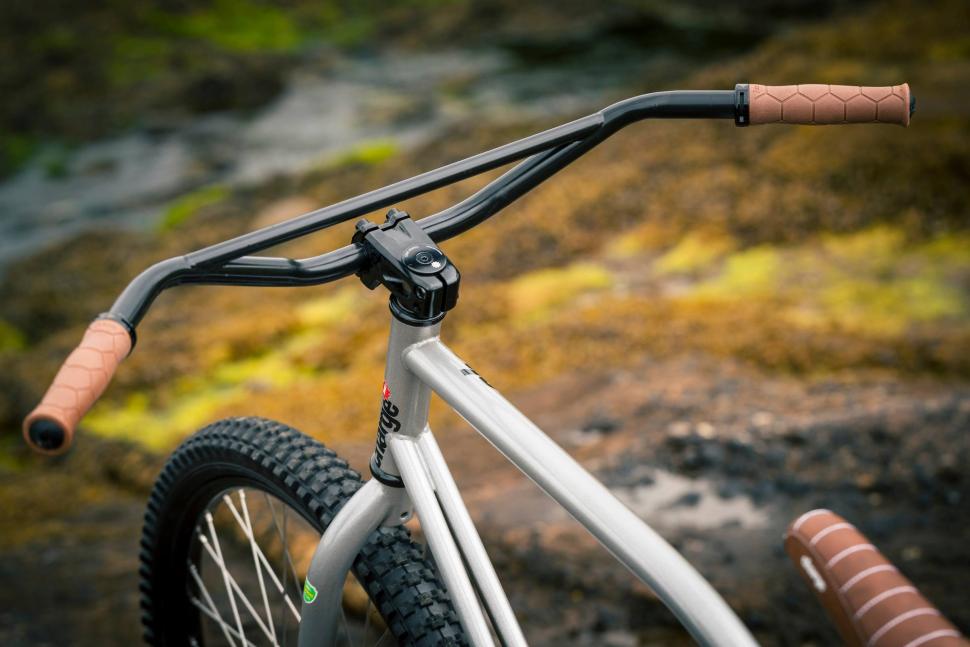 The steel frame has a twin downtube - like the old Raleigh Grifter! - with chunky 26in tyres and a simple singlespeed drivetrain and a coaster brake. Bikes will be supplied with a front brake as is a legal necessity. Bikes will be fitted with a very wide swept back handlebar, padded saddle and intimidating bear trap pedals.

More details on the new Plug range when the full range is finalised and we’ll definitely be getting a ride on one to see how the changes have worked out. More at www.chargebikes.com