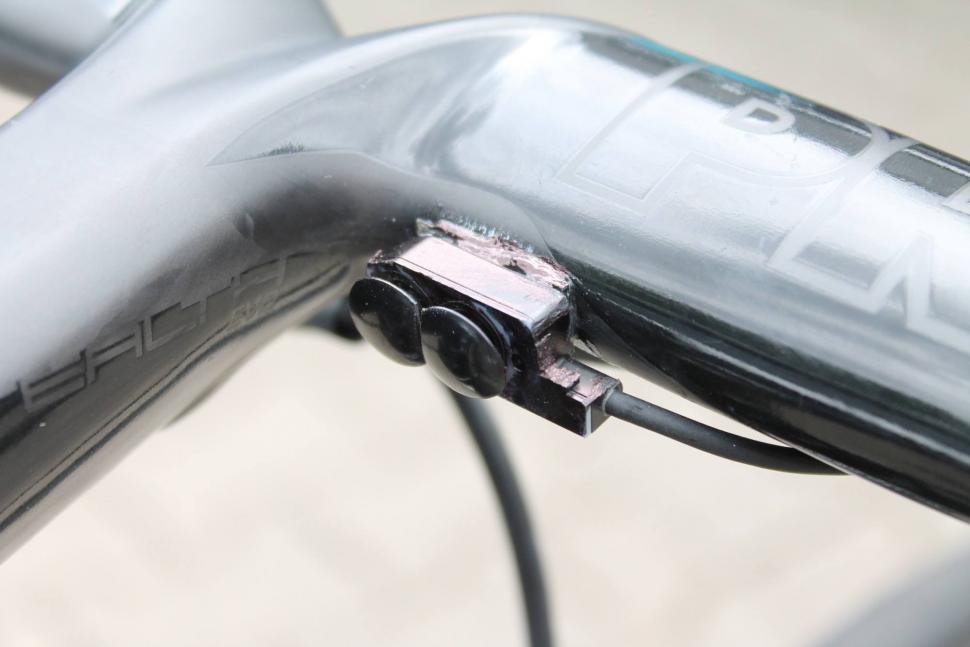 Check out the setups of racers in the Tour de France: Shimano, SRAM and Campagnolo
by Mat Brett

Although all Tour de France riders use shifters from the big component brands, there’s a surprising amount of variety when it comes to setups.

That said, when we’ve checked out the team bikes this year we’ve not seen any riders using mechanical shifting, all of them preferring to change gear electronically, whereas in previous years the occasional rider, such as Fabian Cancellara, preferred to stick with cables.

And we’ve not seen FSA’s K-Force WE groupset despite the brand saying that Astana, Direct Energie and Cofidis will be using it this year.

Find out about FSA K-Force WE here.

The shifters you’ll see far more than any others in the Tour de France are Dura-Ace Di2 simply because Shimano sponsors and supports more teams than any other brand. 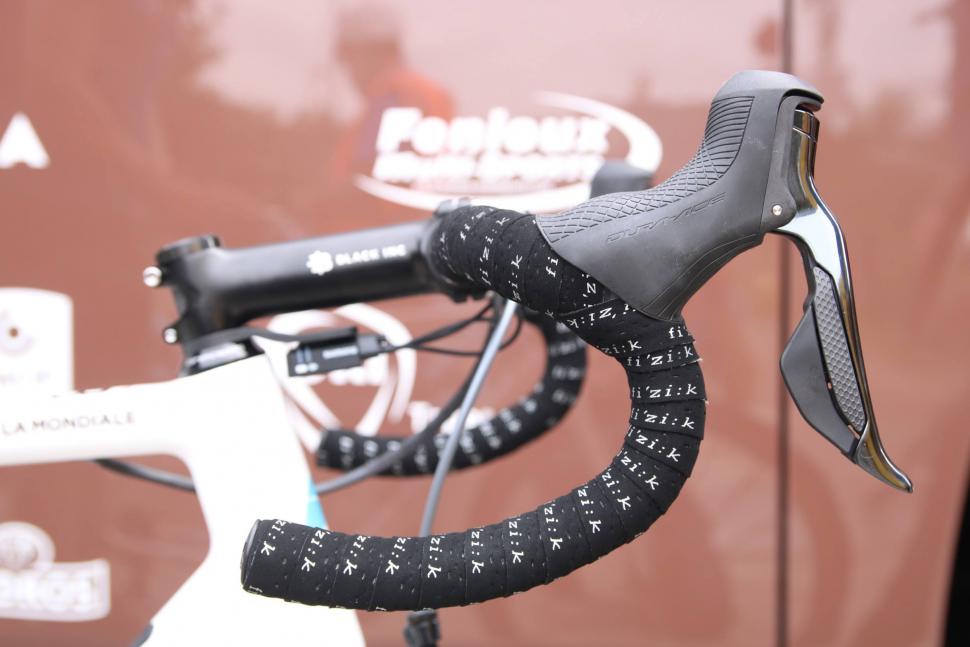 This is Romain Bardet’s bike with the handlebar turned so far forward that the drops point slightly upward. He has his Dual Controls positioned so that the flat section points upwards too.

If you've not used Di2, you get two levers behind the brake lever, plus a button on the hood of each. These can be programmed in various different ways but most people have the right hand Dual Control operate the rear derailleur and the left one operate the front derailleur, the same as with mechanical shifting. 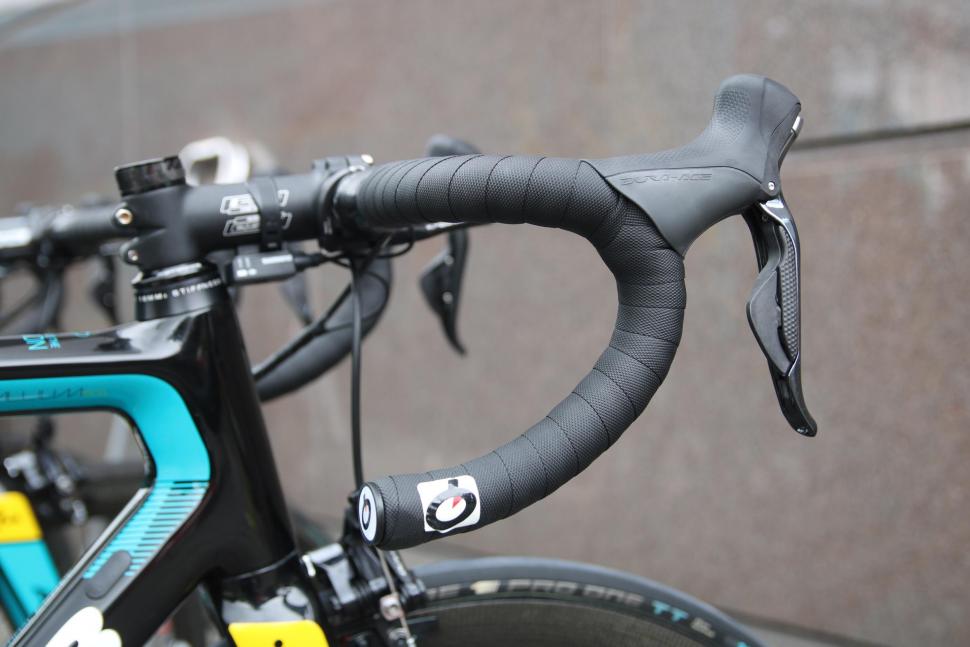 These are previous generation Dura-Ace 9000 Series shifters on one of Astana’s Argon 18s. All teams now have 9100 Series so this could be a spare bike. 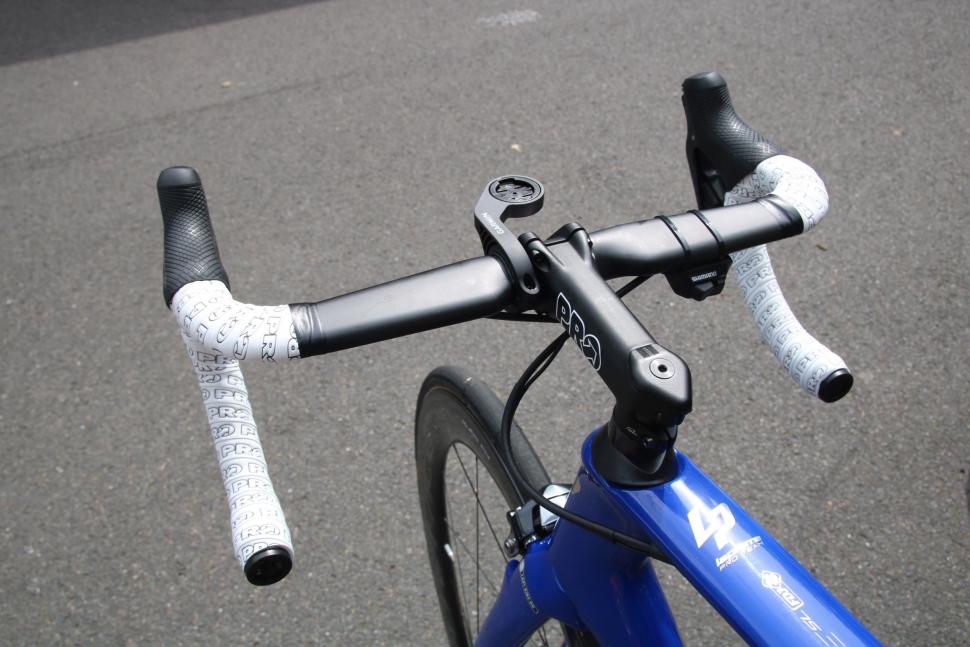 Lots of riders fit satellite shifters which allow them to change gear when their hands are away from the Dual Control levers. This is Thibaut Pinot’s bike, for example, with a thumb operated climbing shifter attached up top. The two buttons allow him to move the rear derailleur in either direction without adjusting his hand position. 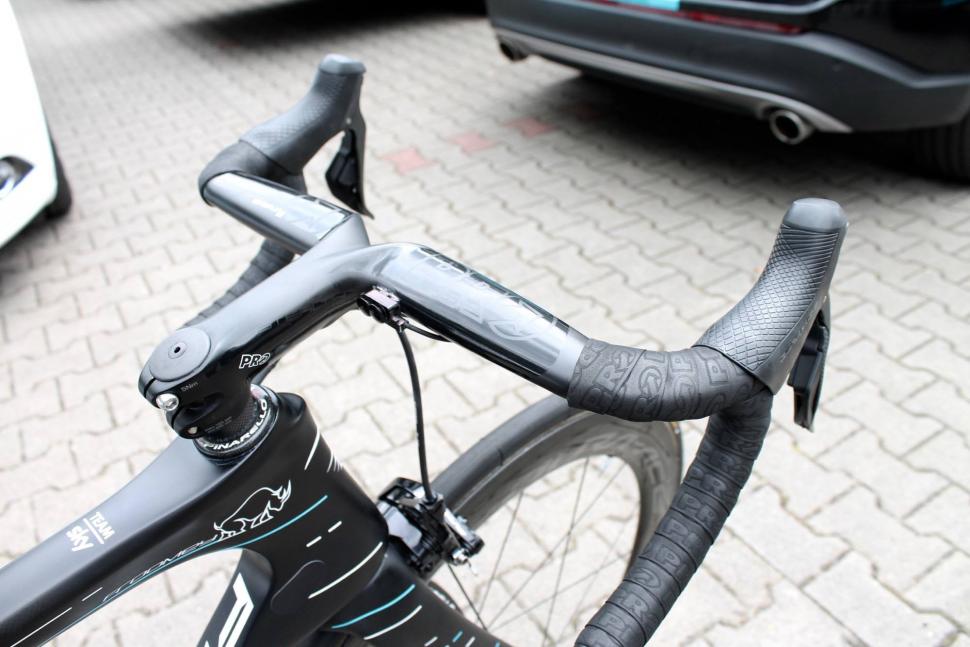 Race leader Chris Froome has a pared down version without any casing bonded to his Pro Stealth Evo combined handlebar/stem.

It isn't especially pretty but he’s winning so he probably doesn’t care much. 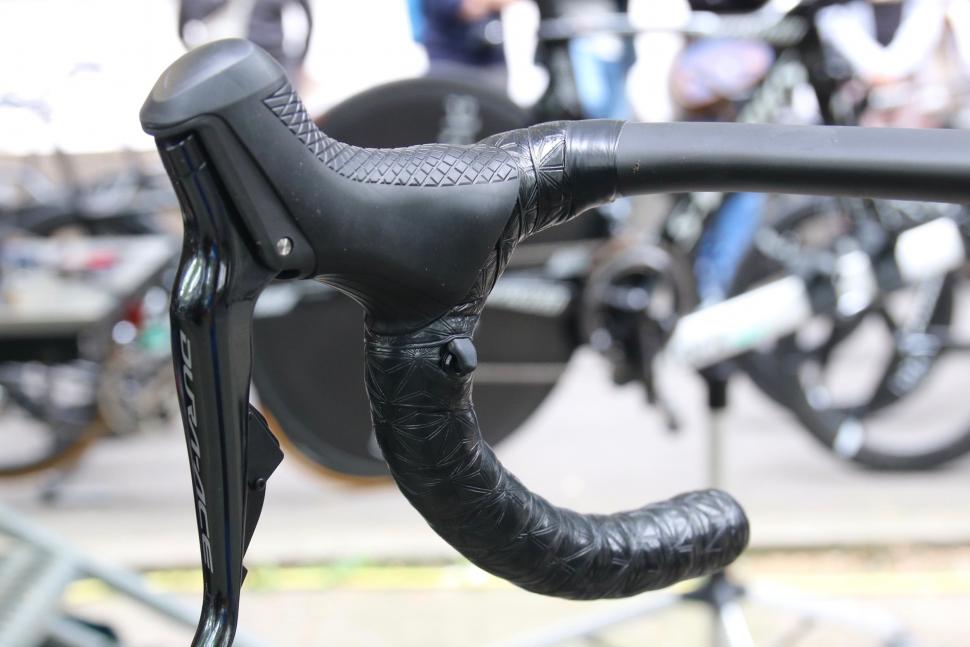 Other riders – this is Peter Sagan’s bike pictured here – fit sprint shifters to the drops. These poke through the handlebar tape and are also thumb operated. Many people find these easier to use than Dual Control levers when riding out of the saddle. You have one on each side to move the rear deraillieur in both directions. 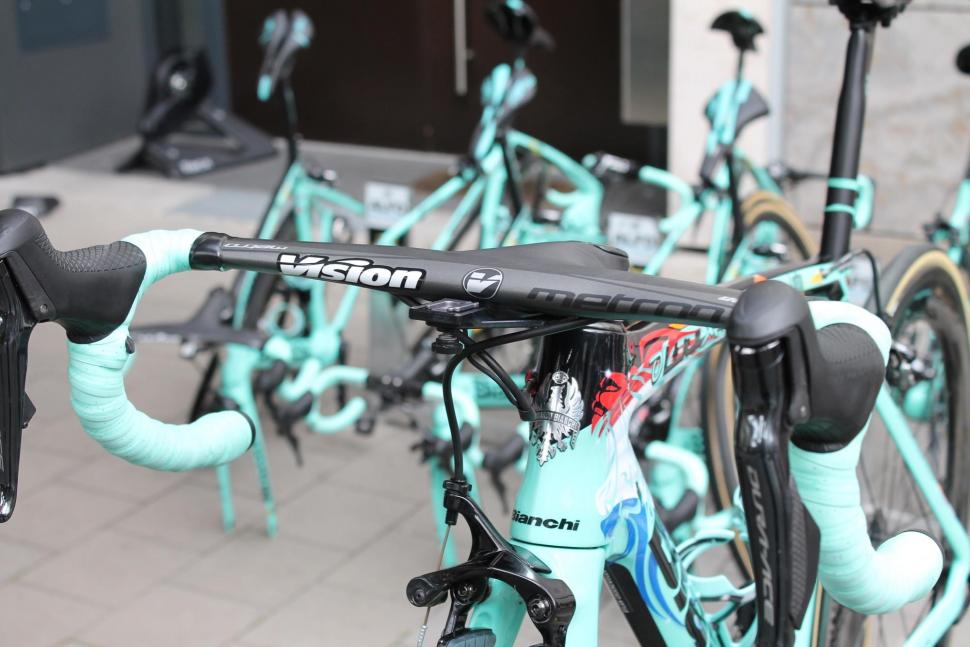 You can see them easily on Dylan Groenewegen's bike thanks to his celeste handlebar tape. 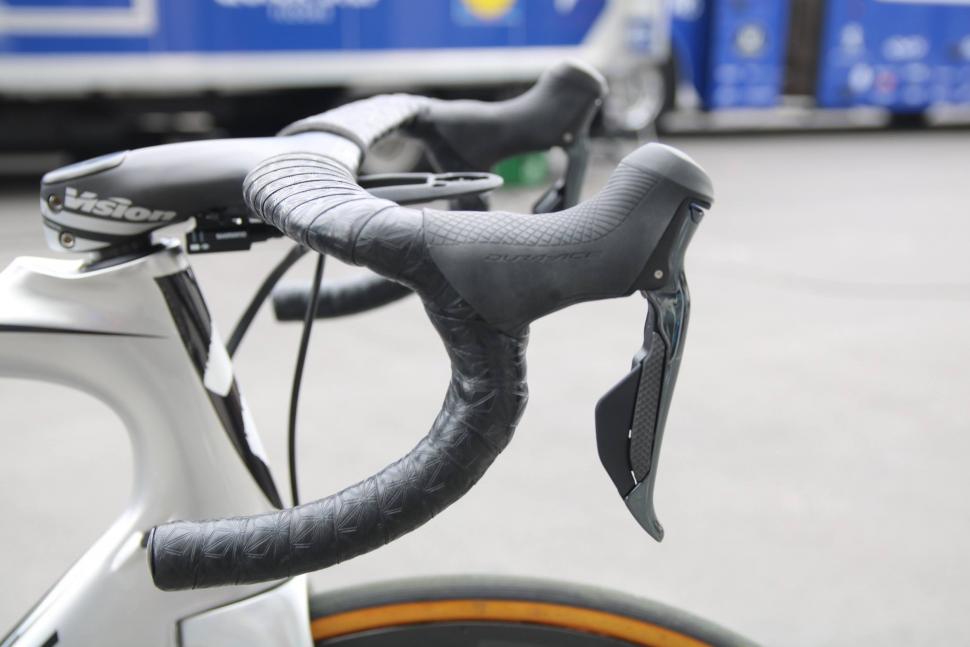 Marcel Kittel has different Di2 shifters because he is using hydraulic disc brakes. 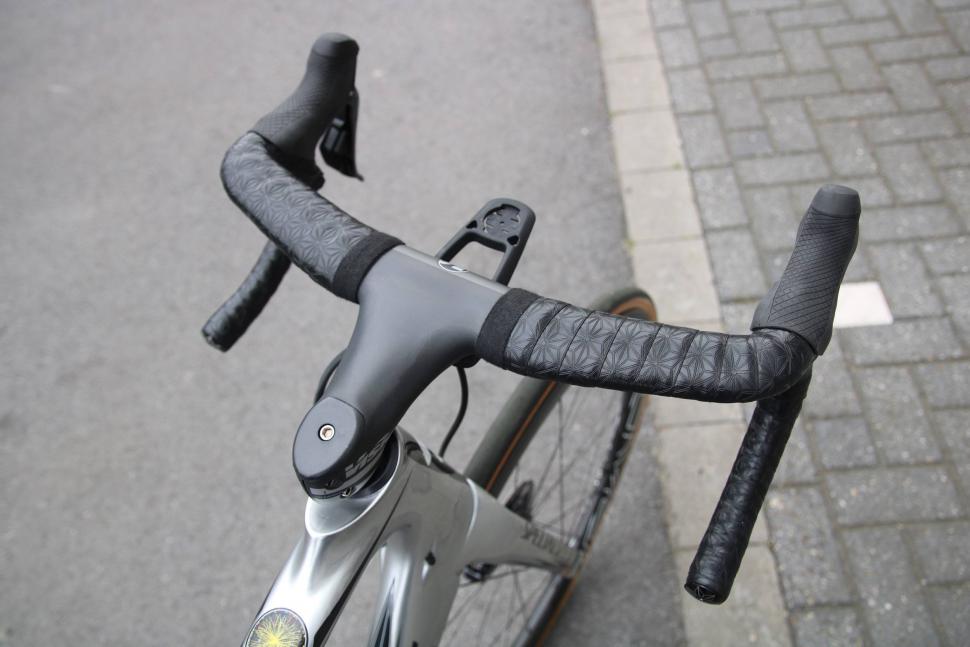 They're virtually the same dimensions as the standard Di2 shifters but for the bump on the inner edge where the hose exits. 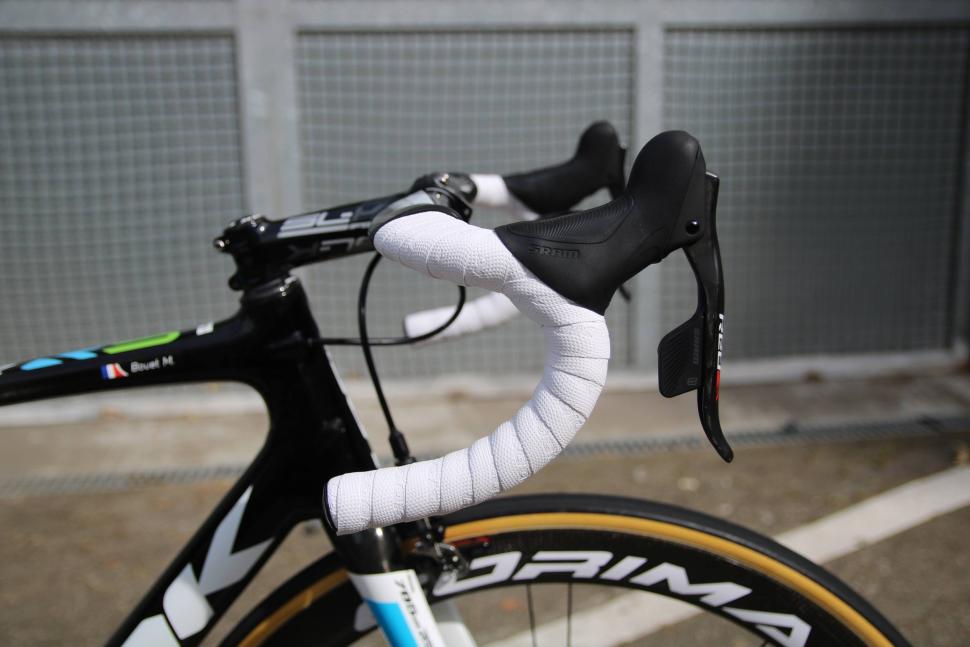 These are the SRAM Red eTap shifters on the bike of Fortuneo-Oscaro’s Maxime Bouet. eTap has just one gear shift lever behind each brake lever. 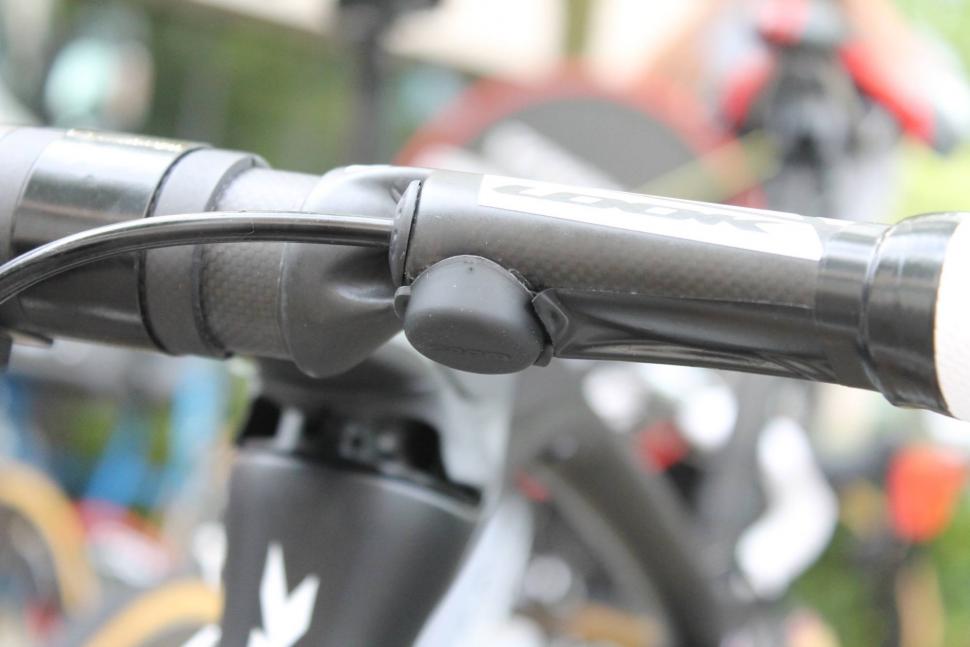 SRAM’s satellite shifters are called Blips and they connect via cable to one or other shifter. They do the same job as that shifter but from another point on the handlebar. Luc Périchon of Fortuneo-Oscaro has them positioned right next to the stem on his Look, serving the same purpose as a Shimano Di2 climbing shifter. 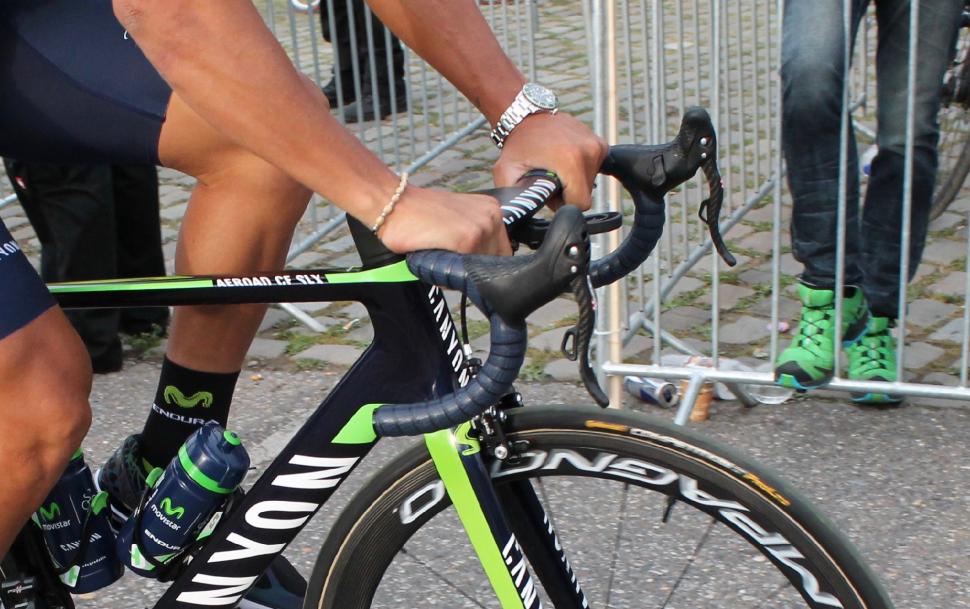 Campagnolo EPS Ergopower controls follow the Italian brand’s ‘one lever one action’ philosophy – in other words, as with Campag, the brake levers don’t double up as shift levers like they do with Shimano. 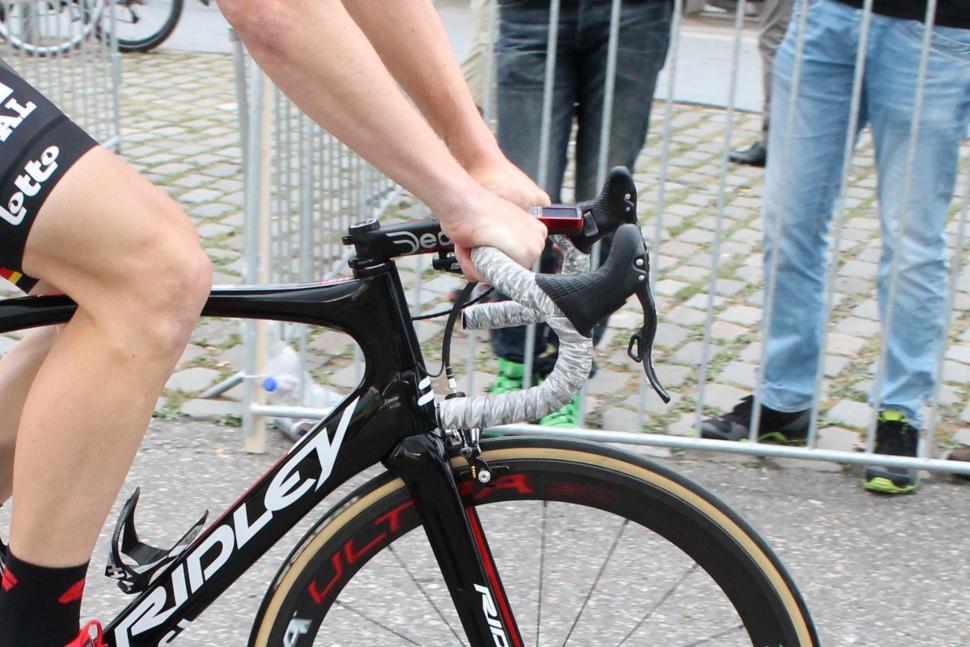 You can customise a Campagnolo EPS electronic transmission, like you can with Shimano Di2, choosing the function of individual buttons and levers and altering settings, but Campag doesn’t offer satellite shifters.

One of the biggest benefits of an electronic system is that it allows you to change gear from both the base bar and the aero extensions of a time trial bike so you can shift while standing up for sprinting or climbing. 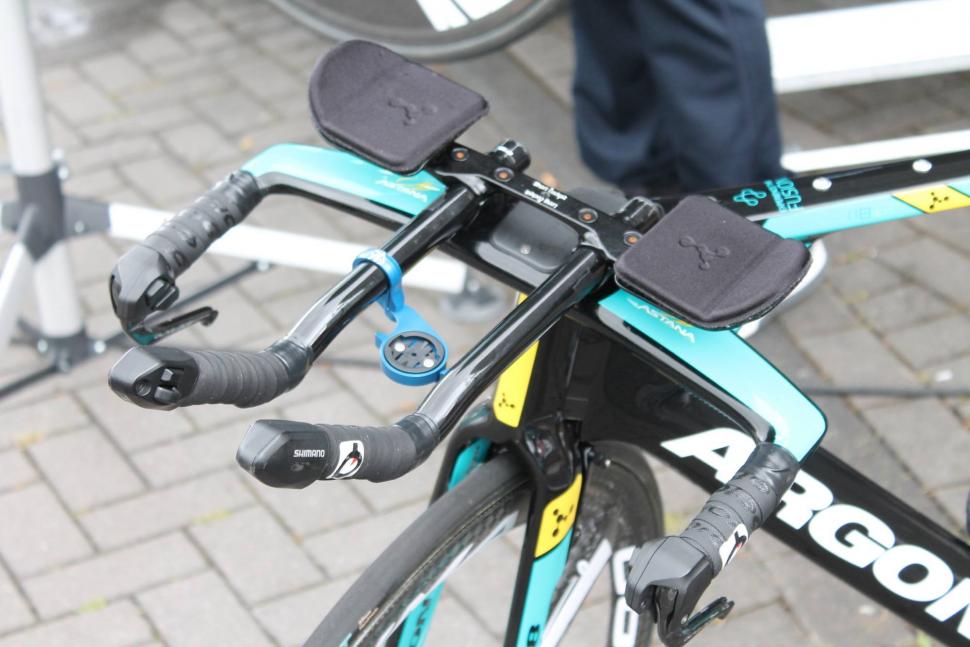 Shimano’s bar end Di2 shifters come in a couple of different versions. These ones on an Astana Argon 18 bike have two buttons on each, so you can move each derailleur in either direction from an aero TT position. 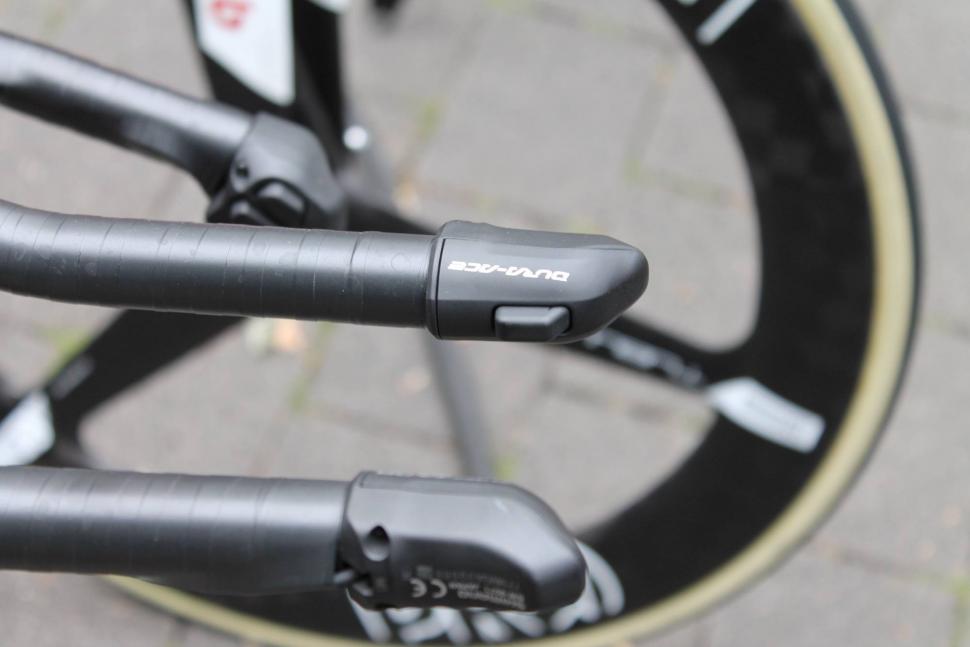 Sunweb’s Simon Geschke has gone for the single button option, one taking care of rear derailleur upshifts and the other providing rear derailleur downshifts. He needs to use buttons on the base bar if he wants to move the chain from one chainring to the other. Geschke has the buttons pointing inwards… 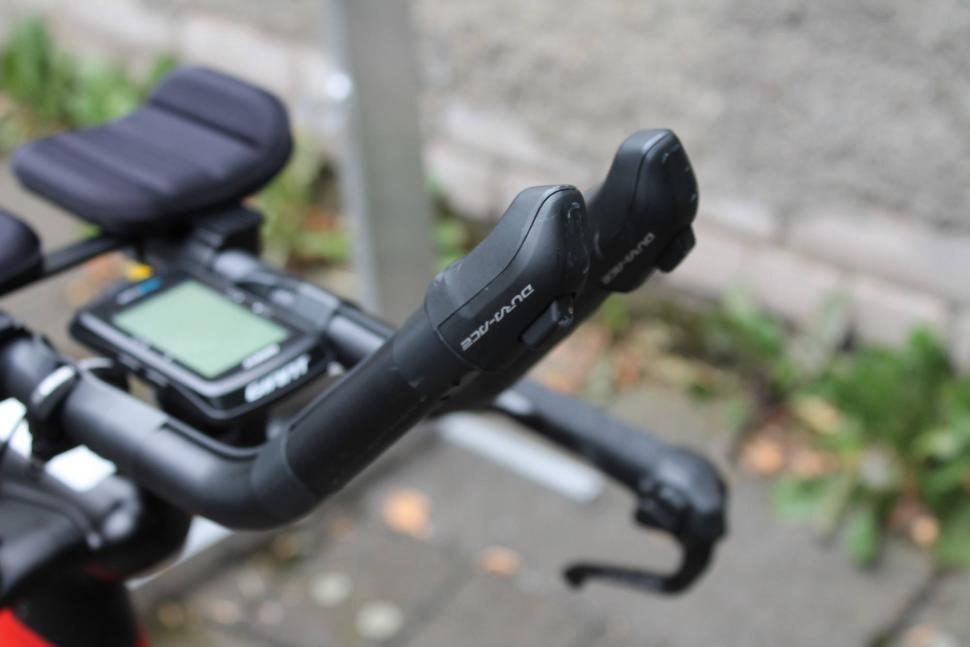 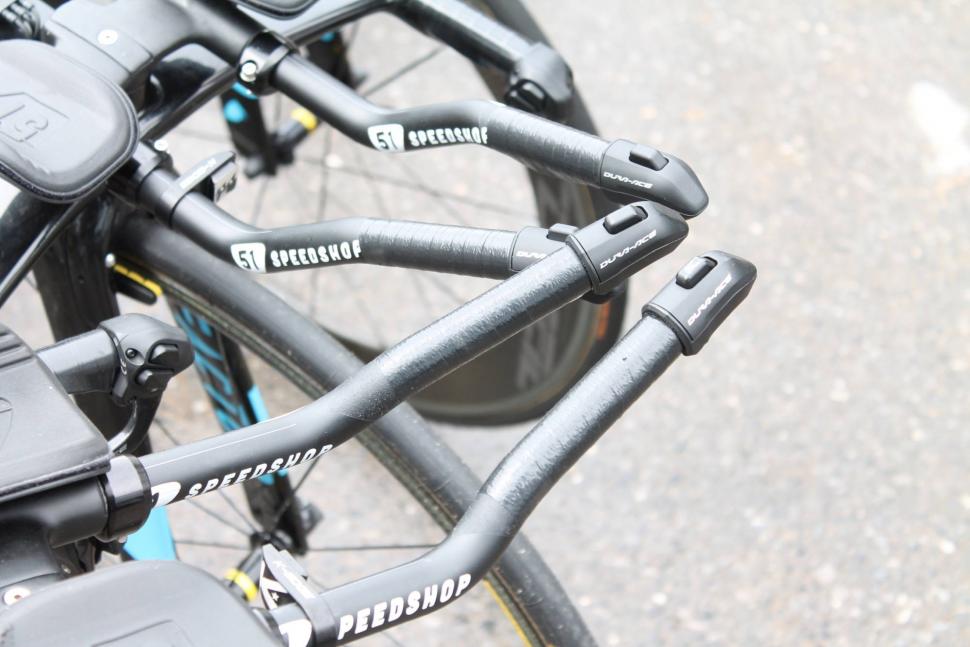 …and these AG2R riders have them pointing upwards, which is more common. It just comes down to personal taste. 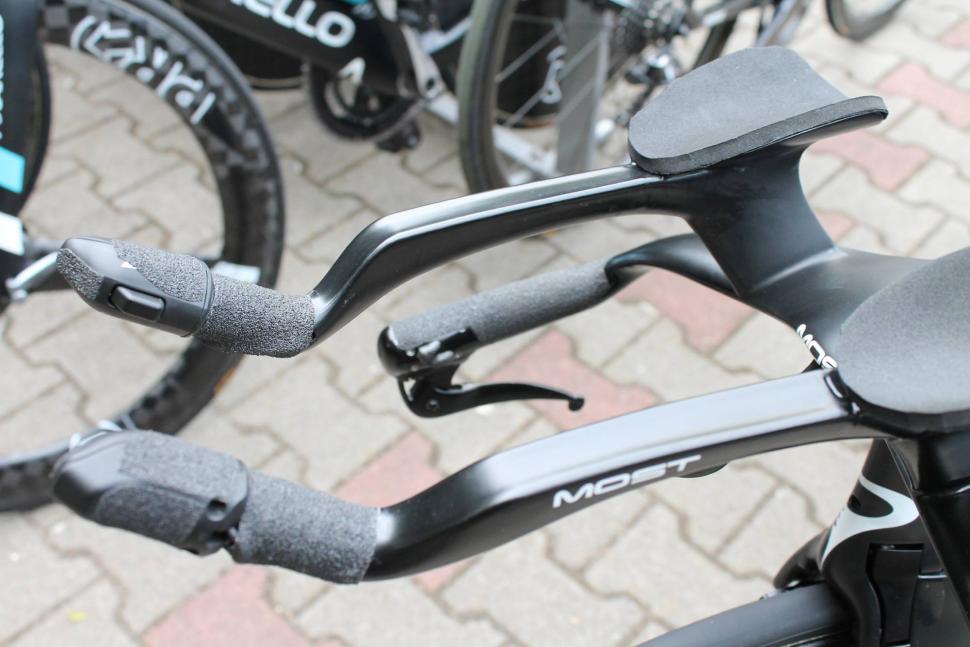 Chris Froome is another rider who prefers the buttons facing one another. Check out the amount of grip tape he uses, not just on his bars but on the shifters themselves to keep sweaty hands in place. 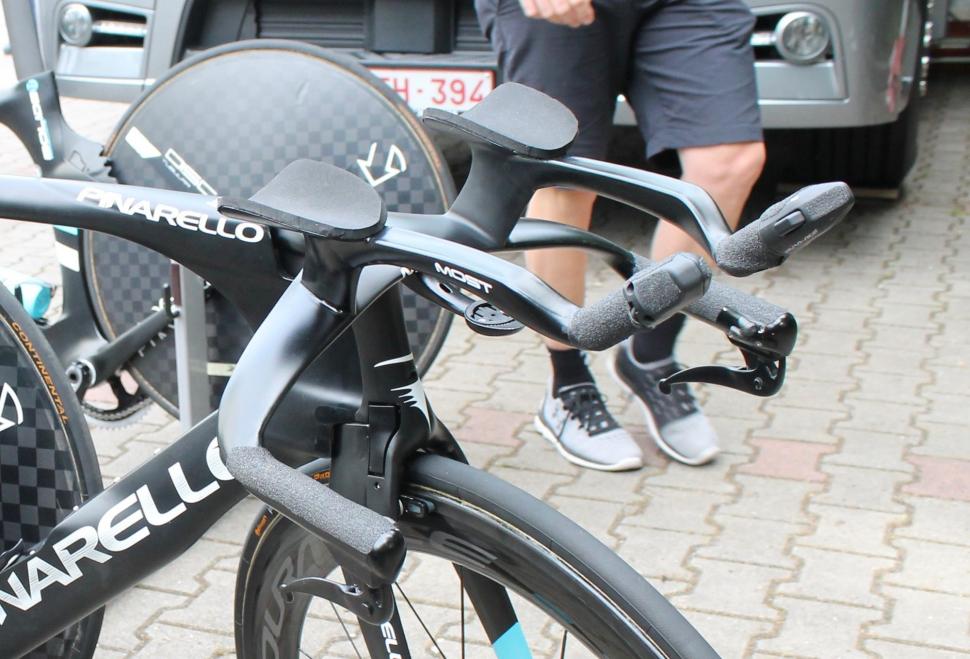 Rather than using Shimano’s own Di2 shifters/brakes on the base bar, these ones were designed by Pinarello especially for the Bolide TT bike. 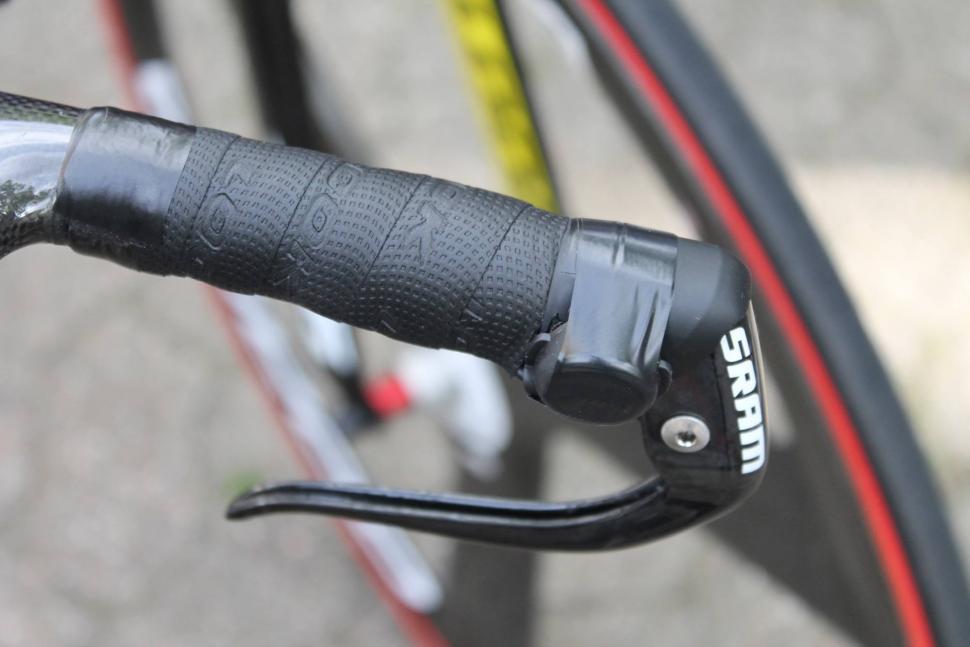 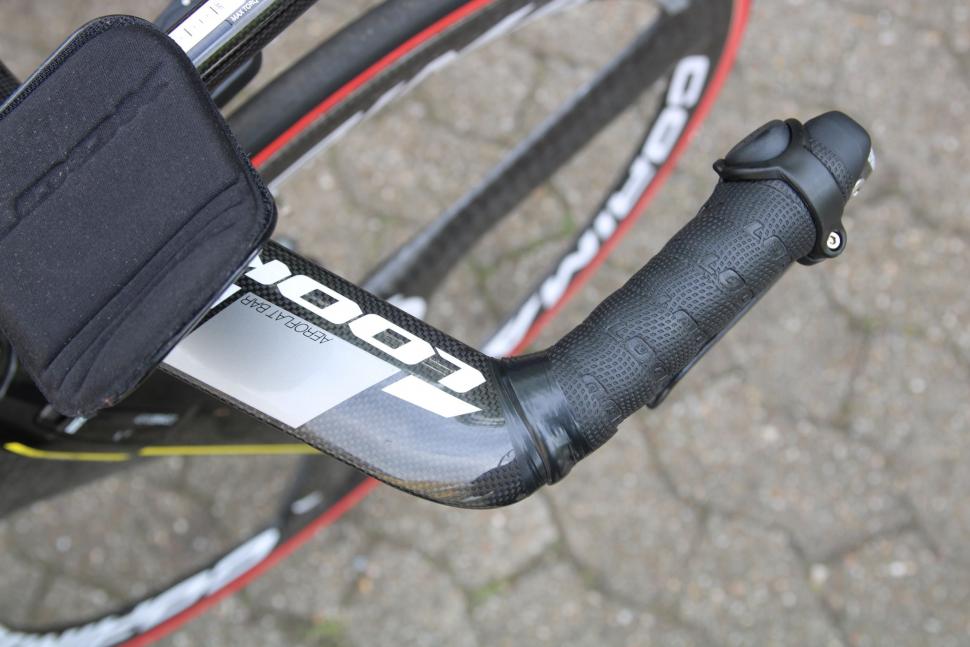 Using a dedicated Blip clamp looks a whole lot neater than the taped on approach. 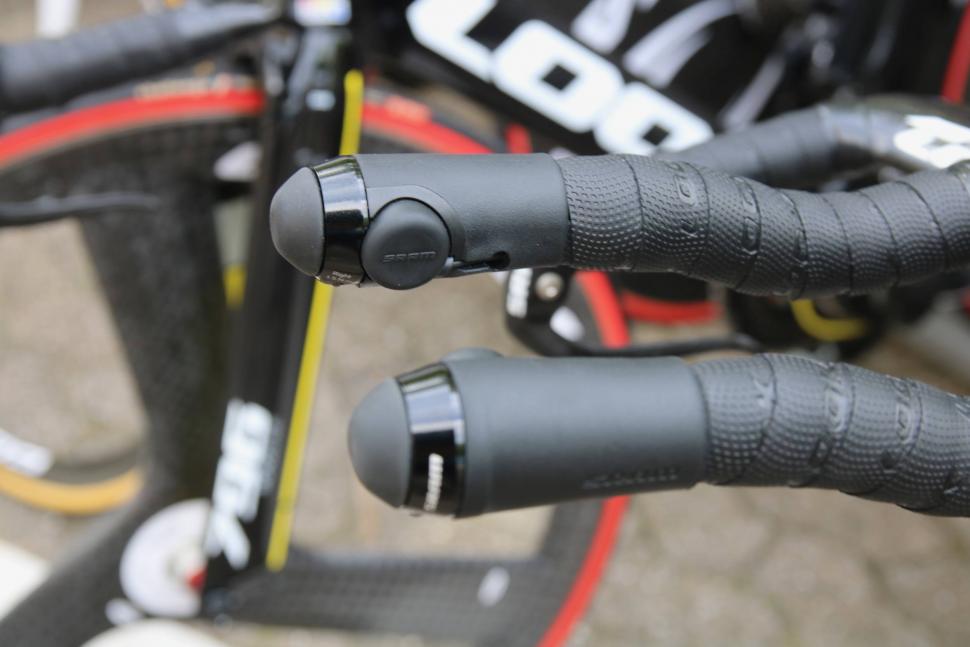 These Blip Grips are designed especially for aero bar extensions. 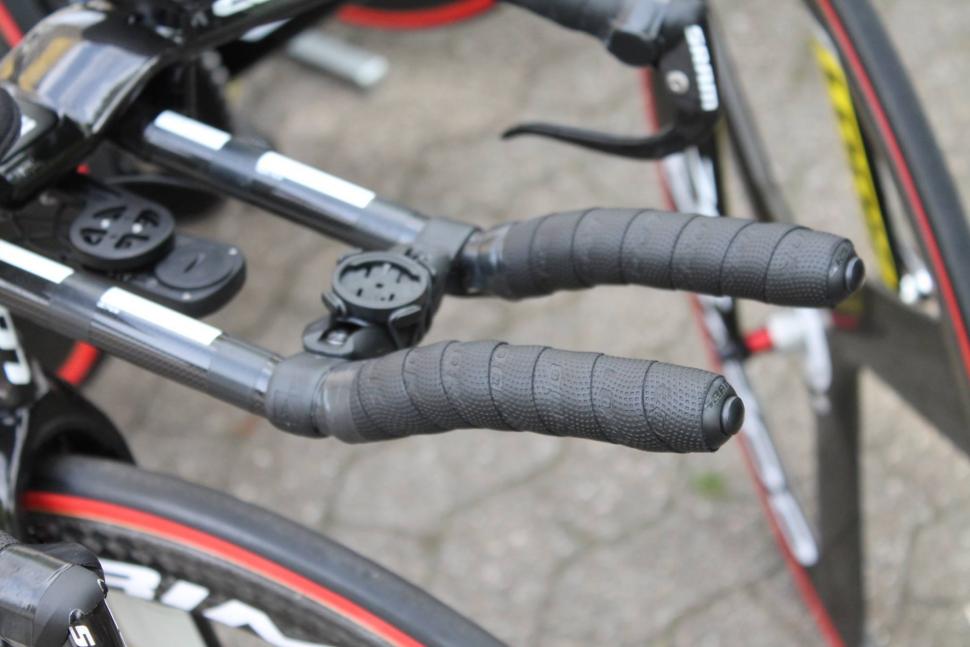 Here’s a different setup for time trialling. eTap Clics give you a shift button right on the end of the aero bar.