The Simplon Pride is another all new aero road bike that enters the fray in 2018 – well, autumn 2017 to be exact – boasting head turning looks and a host of interesting features, including a cunningly designed thru axle system with a neat (and useful) trick up its sleeve.

In what is becoming something of a trend  – see also the 3T Strada – the Pride is a disc brake only affair with an emphasis on speed and comfort. Check out our video for a full bells and whistles in-depth look at the new bike plus our first impressions of the ride, and while you’re waiting for it to load you can read my initial thoughts here.

We got a close up look at the Pride at its launch at Eurobike Live a couple of weeks ago. We also got to throw a leg over it for a 50km test ride in the mountains, but more of that later…

The first thing you notice is that integrated bar and stem, an in-yer-face statement of intent from Simplon. This bike is all about going fast and Simplon reckon their integrated design is more aerodynamic than a traditional bar and stem combo. As you’d expect, it comes in a variety of stem lengths and heights and a choice of three bar widths - 40cm, 42cm and 44cm. You also get some aero profiled spacers to help you fine tune your position on the bike. 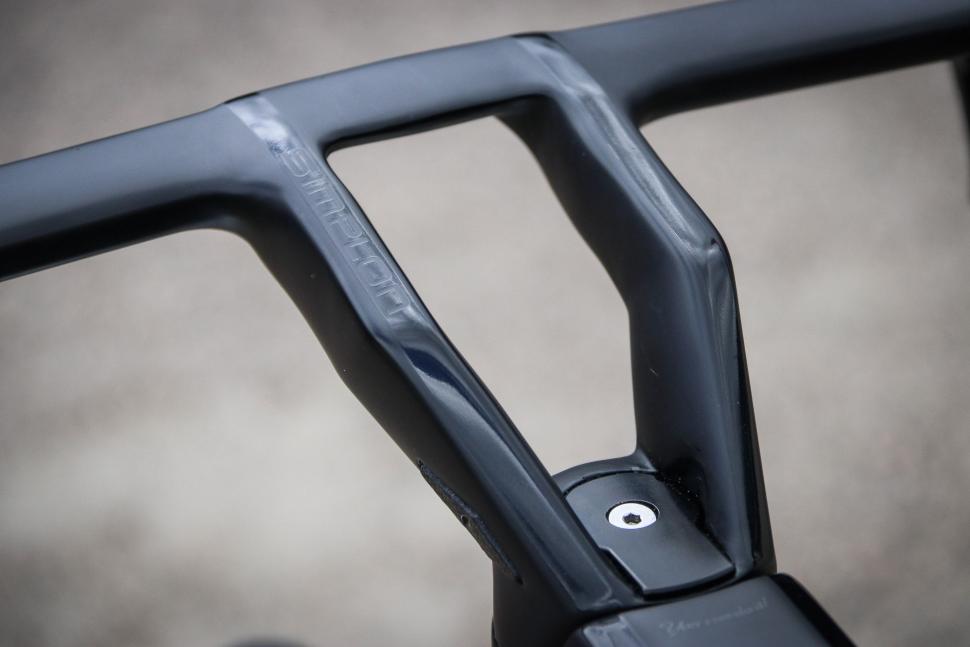 Personally, I’m a fan of flat profiled aero bars for the very un-aero reason that I find the flat bits a more comfortable place to rest my hands on long climbs - they’re not generally ideal for mounting Garmins, Go Pros or similar gubbins though. Simplon address this by integrating a mount underneath the bridge across the gap at the front of the bar. You might expect that your device then slots into that inviting hole where your stem would normally be. Nope. Simplon say that would undo all the aero gains their bar/stem design delivers. Instead, your Garmin (other GPS devices are available) mounts out front to minimise the disruption of airflow over and through the bar/stem area. I can’t help wonder how efficient that is when there’s any sort of breeze coming at you from an angle other than head on. Mind you, Simplon have tested their design in a wind tunnel and I haven’t – yes, I know, slack.

All that said, if you really wanted the Pride but you also really couldn’t make the adjustment from staring at your stem on a long ride to looking at your front wheel through a gap where your stem normally is – if you’re Chris Froome then – you can fit a conventional bar/stem combo instead.  The same applies with the aero optimised seat post - in a neat piece of design Simplon supply the bike with an adaptor for the integrated seat clamp that allows you to fit a traditional round post rather than the more teardrop profiled aero one that comes as standard. 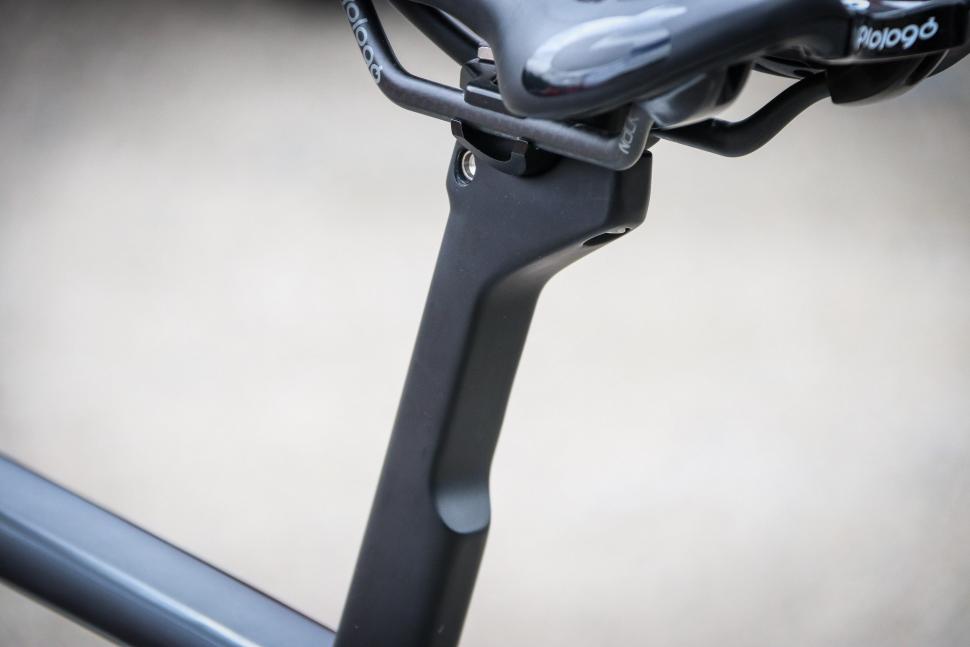 To be honest, if you bought a Pride I’m not entirely sure why you’d want to swap the bars. If the Pride’s striking looks don’t float your boat then I don’t think you’d buy one in the first place - although down the line maybe it would make selling it on easier. Not being dependent on one proprietary seatpost might well be useful should you need to change the post for some reason - possibly if you are one of those people that needs to set the nose on the saddle slightly off centre, for instance. The Pride’s aero optimisation doesn’t stop at the bars, stem, and seatpost. As you’d expect, the frame and fork incorporate all the latest aero trends - yes there are Kamm tails, plus purposeful looking profiling at the junction of the forks and head tube, and a cut-out section on the down tube to maximise aero efficiency around the bottle cage. That theme continues around the disc brake calliper on the front fork which tucks in discretely to minimise disruption to airflow around the fork blades. It seems that one reason we are seeing so many aero optimised bikes with disc brakes is that, contrary to what you might read on forums, it’s easier from a design point of view to make a disc braked bike more aerodynamically efficient than a rim braked one. As more than one bike designer explained to me at Eurobike Live, you can do a lot more with the fork crown and head tube once you don’t need to have enough material in the crown to allow you to position a hole up there to mount a calliper brake (of course, designing a bike with direct mount brakes gets you around that too). 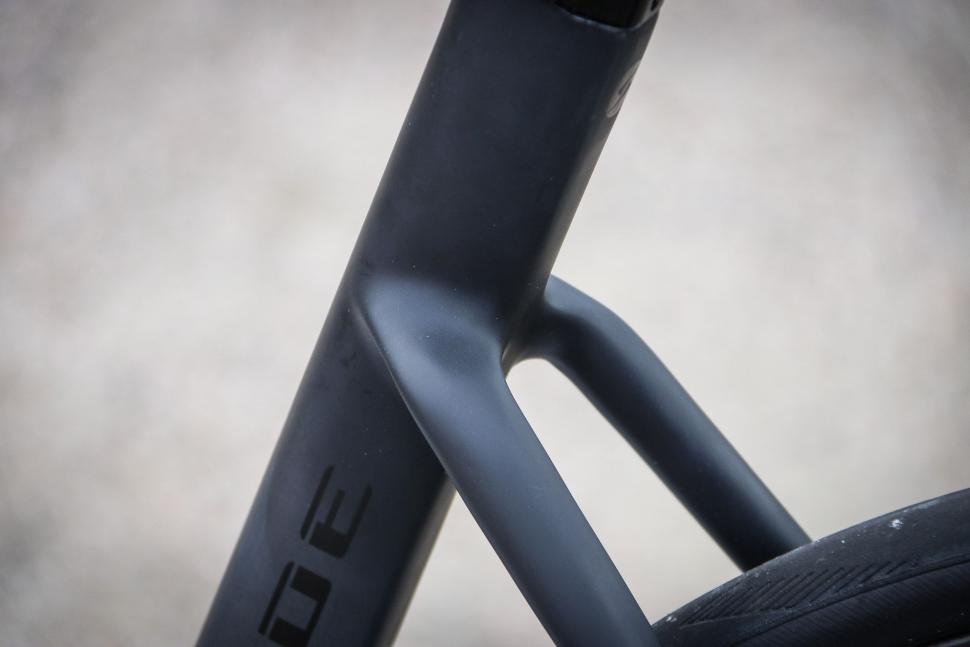 You can use that design leeway in a number of clever ways including hiding all the cabling for a further aero benefit. Simplon would no doubt say that their integrated cockpit makes that even easier although BMC have got rid of all the external cabling on the disc version of the latest SLR01 Team Machine and kept the stem. At the back, switching from rim brakes to discs means you can dispense with the rear brake bridge which similarly opens up a number of possibilities, most notably to do with tyre clearances. The emphasis on aerodynamics and speed may be a big part of the story with the latest version of the Pride, but it’s not all of it. The other big thing with the Pride is comfort. This bike is designed to be fast without beating you up. The fork in particular features Simplon’s Raptor dropout design which curves back in a bid to minimise ‘road buzz’, the high frequency vibrations that can be transmitted through a stiff frame (which this is) as it tracks across even slightly uneven road surfaces.

The bikes on show at Eurobike Live came fitted with Schwalbe’s One Pro 25mm tubeless tyres. Don’t be surprised, though, if the models that reach the shops come with 28mm tyres. It’s currently the subject of some internal debate at Simplon. While the Pride is an undeniably smooth, fast ride with 25mm tyres (in fact, that was my over-riding impression of the bike) I can’t help feeling that it would be even smoother with 28mm One Pros with no sacrifice in performance. 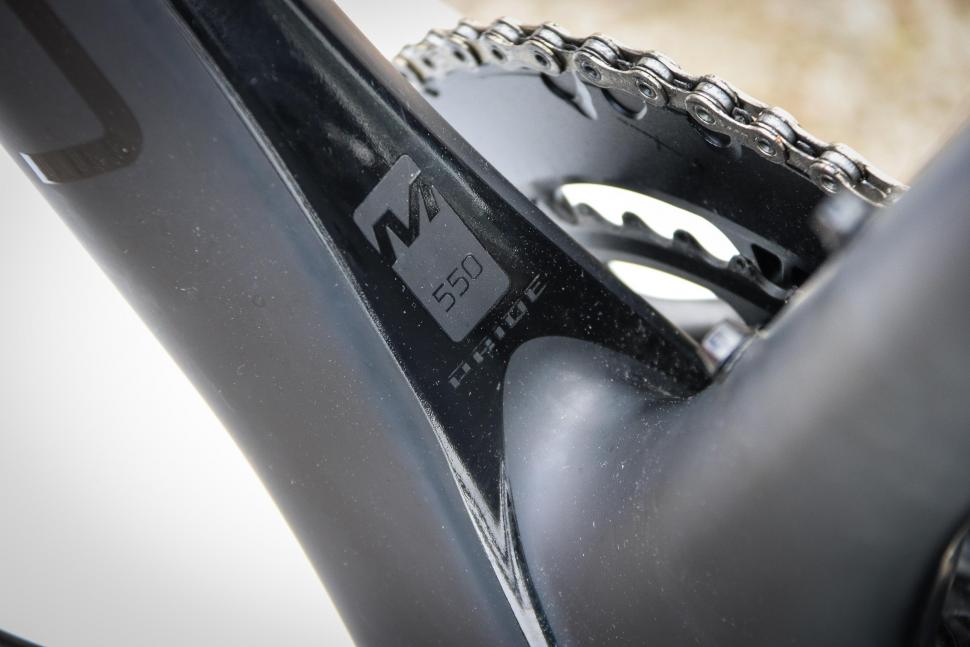 So, it’s fast and it’s comfortable, it’s also fairly light too by aero disc bike standards. Simplon are claiming an overall weight of 6.8kg for the small sized version. They’ve managed this by using EPS moulding technology, a manufacturing technique used on a lot of higher end bikes these days which allows you to get rid of any unnecessary material on the inside of the tubes. 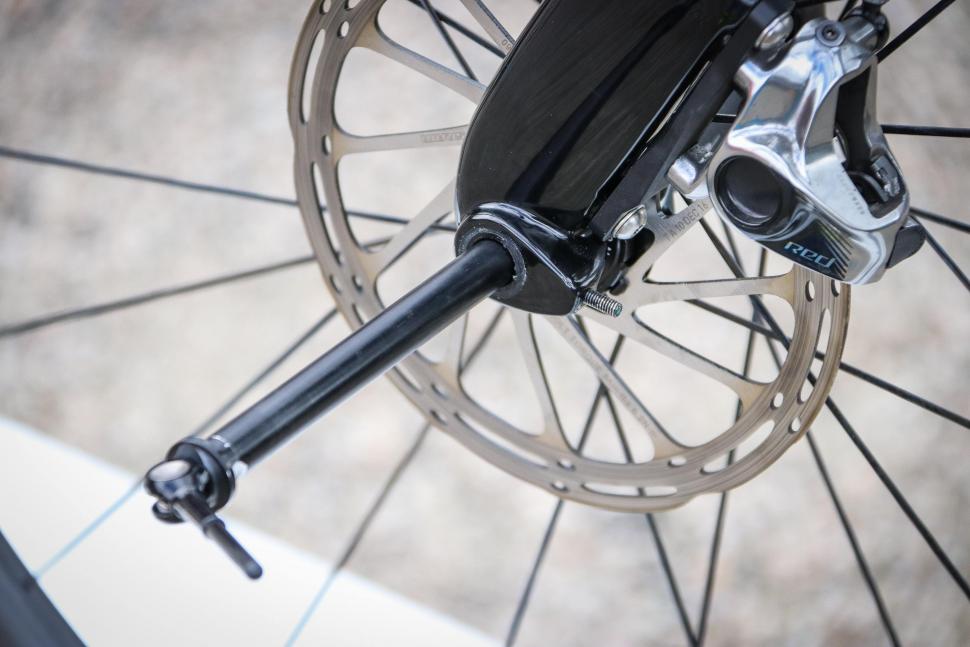 Oh, and the Pride has one other trick up it’s sleeve: Simplon’s patent pending Smart Thru Axle. Watch our video for a full demo of it in action, but the gist is that it makes thru axle wheel changes even quicker. Cool.

The Pride will be available in a number of different builds including Shimano and Ultegra Di2 and SRAM eTap. UK prices haven’t been announced yet, but the word at Eurobike was the entry level bike would likely be a shade under five grand, exchange rates permitting.