Specialized first introduced its Diverge in 2014, one of the first in a growing, and now very popular, category of adventure disc-equipped road bikes. For the 2018 model year it has given the Diverge a complete overhaul making it an even more capable bike on off-road terrain, with added suspension, increased tyre clearance and revised geometry.

The Diverge is pitched as a road bike that can also tackle dirt and gravel roads, and also singletrack and woodland trails as well, as demonstrated by Peter Sagan in this video published earlier today.

The most substantial change to the redesigned frame is the inclusion of the Future Shock. First debuted on the radical new Roubaix last year, Future Shock is a spring inside a cartridge positioned in the top of the steerer tube. It provides 20mm of basic suspension - there’s no damping or adjustment. Despite this fact, I’ve been impressed with how well it works on the Roubaix, it really does help to smooth out a lot of the road chatter. 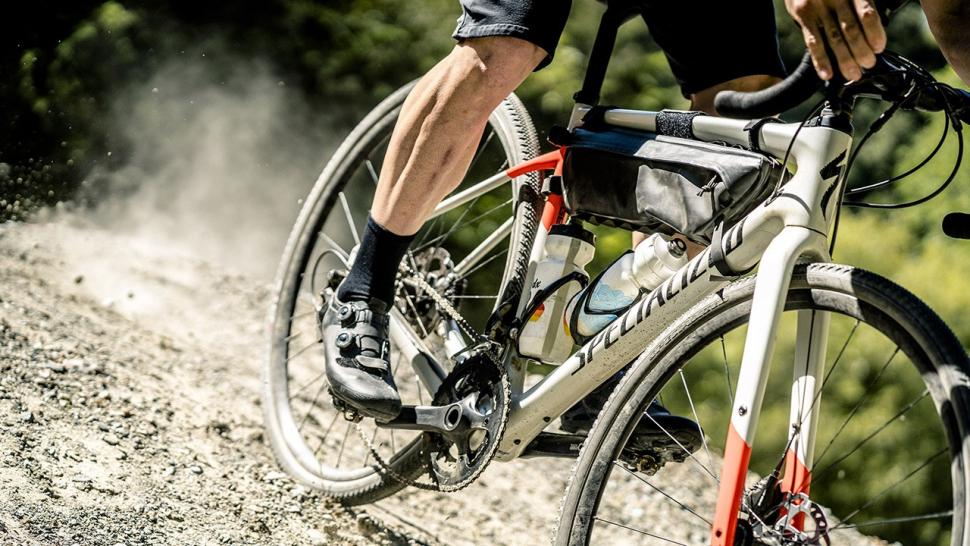 Specialized has modified the Future Shock on the new Diverge, adapting it for off-road use. A stiffer spring provides a more progressive suspension action so makes it more suitable for tackling rougher terrain. That should mean it won’t dive under heavy braking or through steep descents, and won’t bob when riding out of the saddle as much.

Another notable change is the increased tyre clearance. The original Diverge maxed out at 35mm, the new version goes up to 42mm tyres. It’ll also accept 650bx47mm tyres.

That change brings the new Diverge bang up to date and in line with the latest generation of adventure bikes. There’s much debate about tyre width and tyre choice but the common census emerging among those people that are doing a lot of gravel riding is that a 38-40mm tyre is a pretty good choice in terms of width.

Tread pattern obviously depends on the trails and conditions and the mix of road and off-road you’re doing. 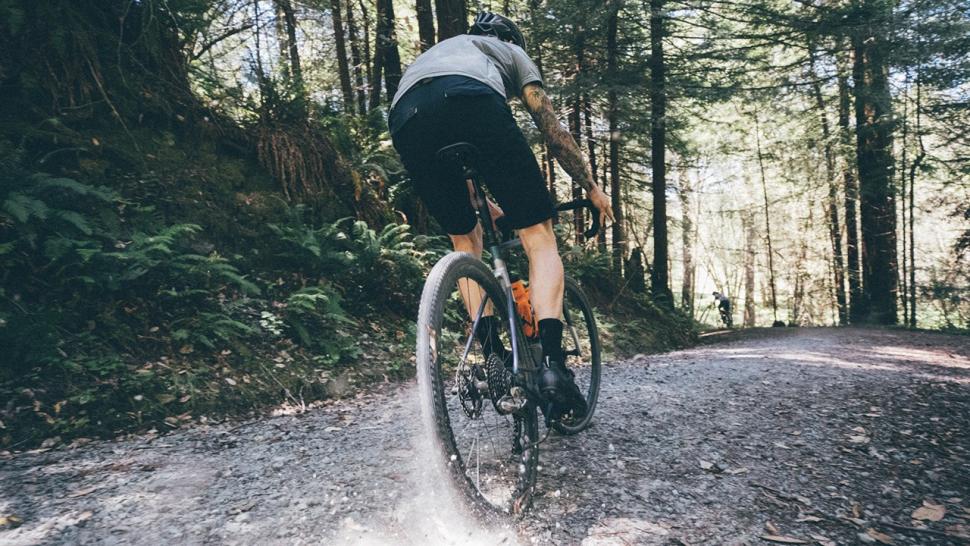 Specialized has developed what it calls Open Road Geometry for the new Diverge and is its attempt to move away from traditional cyclocross geometry to one that is better suited for the sort of road and off-road riding the bike is designed for. As such it draws a very clear line between the Diverge and CruX.

It says you “can think of its as a road version of modern trail bike geometry,” but what does that mean if you’re not into mountain biking? It amounts to a much lower bottom bracket, slacker head tube and shorter wheelbase and chainstays. Those sort of changes should provide improved stability and handling on the dirt, without compromising road performance. 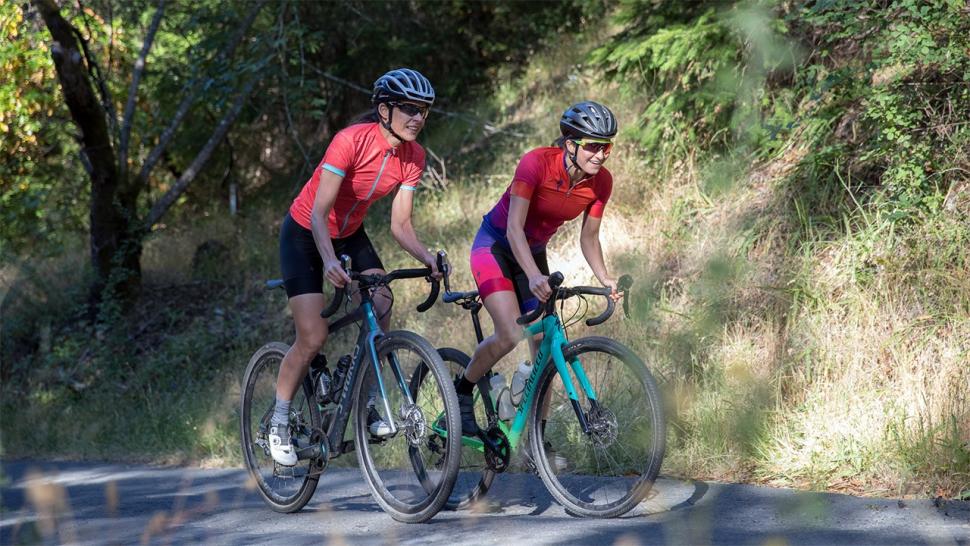 The Diverge will be available in carbon fibre or E5 aluminium. The former has a frame that weighs a claimed sub-900g for the S-Works version. It has adopted FSAs BB386EVO press fit bottom bracket which provides wide compatible with most cranksets on the market at the moment.

There are disc brakes, obviously with the latest flat mount standard. Thru-axles are 12mm at both wheels. All gear cables and brake hoses are internally routed.

A visual difference to the old Diverge are the dropped seatstays, adopted from the Roubaix and intended to allow the seat tube to deflect more under impacts. The seat tube is curved around the rear tyre to increase clearance.

The new Roubaix annoyed a few people due to its lack of mudguard mounts, but rejoice, the Diverge keeps the mudguard mounts of the original, using the company’s Plug + Play concealed eyelets. 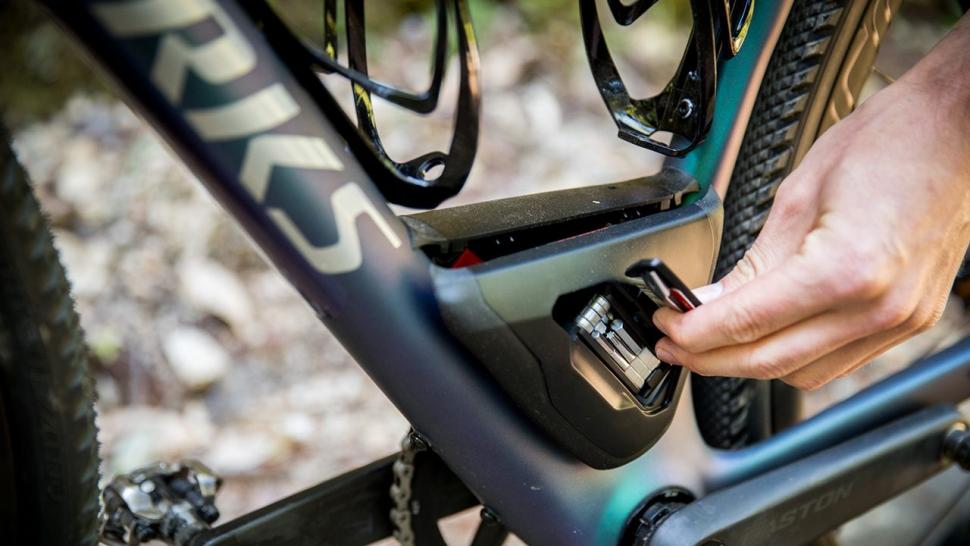 There are also rack mounts and the frame is compatible with the SWAT storage system (a box positioned at the junction of the down tube and seat tube for storing tools and other such essentials) and, on the S-Works model, a dropper seatpost.

What’s a dropper seatpost you ask? Popular on mountain bikes, a dropper post is an adjustable height seatpost that is designed to allow you to lower the saddle when tackling technical trails and steep descents, where having the saddle out of the way can benefit handling.

There has been speculation over the years about the rise of dropper posts on road and adventure bikes, but we’ve not seen much sign of it yet. Specialized has developed its own Command Post CXP dropper post, with a 27.2mm diameter where it enters the frame and 35mm of travel adjustment via a handlebar lever.

There eight bikes (six men’s and two women’s) are listed on the Specialized website so we can take a closer look at the specifications. The men and women bikes use the same geometry but the women’s range foes do to a 44cm. 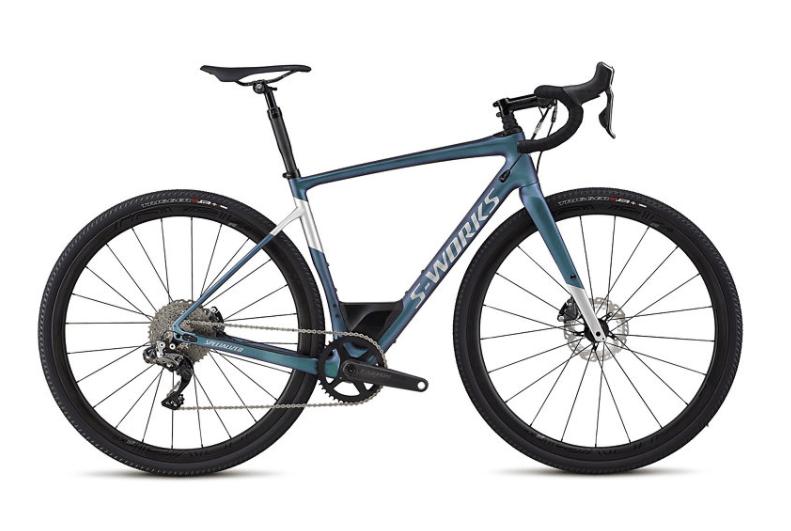 The range-topping model is the S-Works Diverge (above), available as a complete bike or a frameset. The fully built bike features a 1x11 single ring drivetrain, comprising a Shimano XTR Di2 rear mech, R785 hoods and RS805 brake calipers, and a new Easton EC90 SL Carbon crankset on a CeramicSpeed 386 EVO bottom bracket. 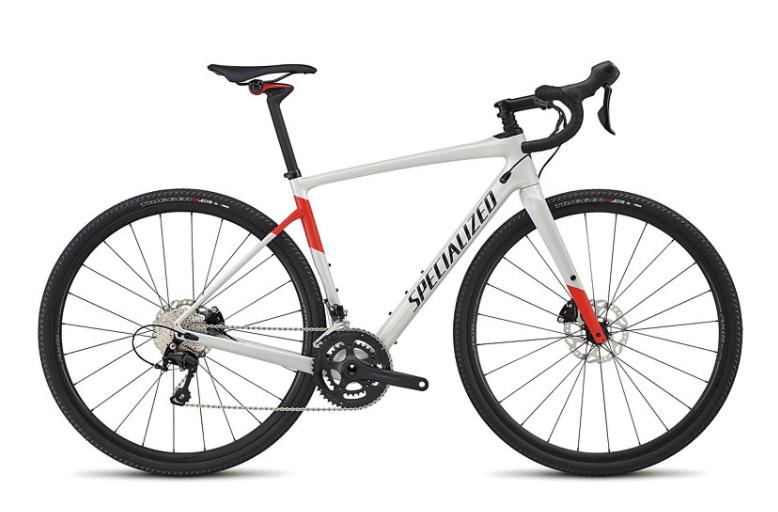 The most affordable carbon Diverge is the Diverge Comp. Same frame but a Shimano 105 groupset with RS505 brakes and a Praxis Alba 2D 48/32t crankset. Wheels are Axis Elite Discs shod with Specialized Trigger tyres in a 38mm width, and tubeless-ready. A Specialized CG-R seatpost, same as used on the Roubaix, replaces the dropper post on the S-Works model.

Here’s how Specialized describes the Divege:

“The Diverge doesn't fit neatly into one box. First and foremost it's fun and always down for a good time. Of course, all of the aforementioned features make it pretty damn versatile, whether you're out for a fast ride the gang or solo epic on the dirt with fully loaded frame bags.”

1
Near Miss of the Day 669: Cyclist confronts driver after 'worst overtake I've ever seen'
2
Cyclist sprints away from knife-wielding mugger – and warns others to be vigilant
3
Mark Cavendish reveals ‘hole behind heart’ after serious crash in Belgium
4
New Zealand MP goes into labour, cycles to hospital to give birth
5
Brazilian speedster aims to hit 300km an hour next year to become world’s fastest cyclist (+ video)
6
Are world leaders "delusional" when it comes to active travel? COP26 discussed, plus how to layer up for winter riding on episode 12 of the road.cc Podcast
7
Cyclist who broke motorist’s jaw cleared of assault – because of driver’s close pass
8
Near Miss of the Day 668: Cyclist almost taken out by corner-cutting driver