Here’s a preview of some of the bikes, products and brands you can expect to see at the 2016 Cycle Show next week, which this year celebrates its 15th birthday and promises to be bigger and better than ever before.

The show takes place at the NEC Birmingham and is open for three days- 23-25th September. Tickets cost £13,50 for an adult, but if you use the discount code roadcc it’ll only cost you £12. Buy your tickets here 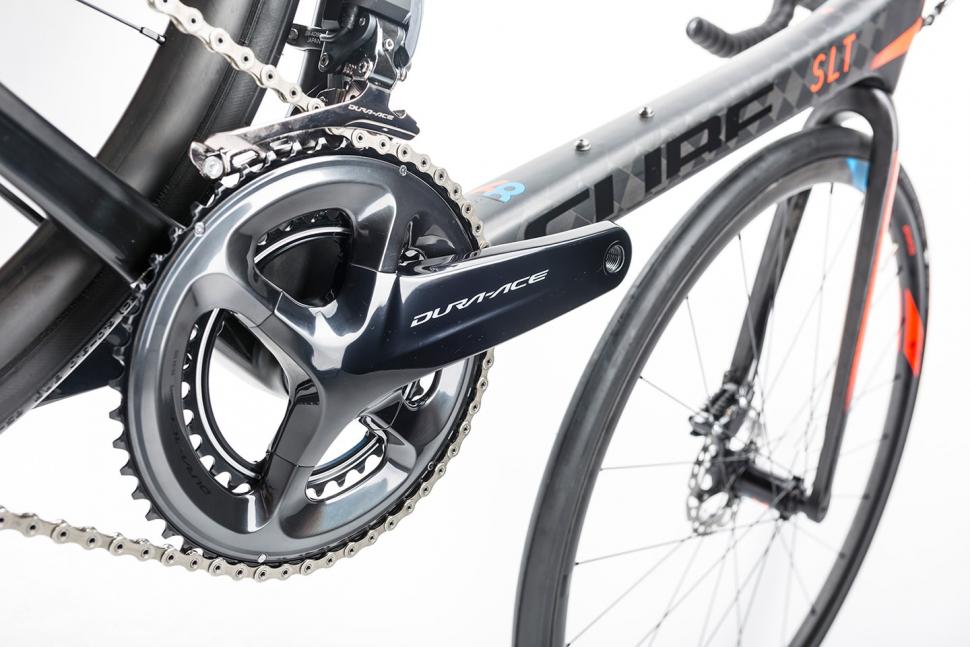 Cube will have its biggest ever display of road bikes at the show and the highlight will be the 2017 Litening C:68 SLT Disc which will be fitted with the brand new Shimano Dura-Ace Di2 9100 groupset, launched earlier this summer but not seen in public until now. Alongside the electronic gears are Shimano’s latest hydraulic disc brakes, with 140mm rotors and flat mounts. 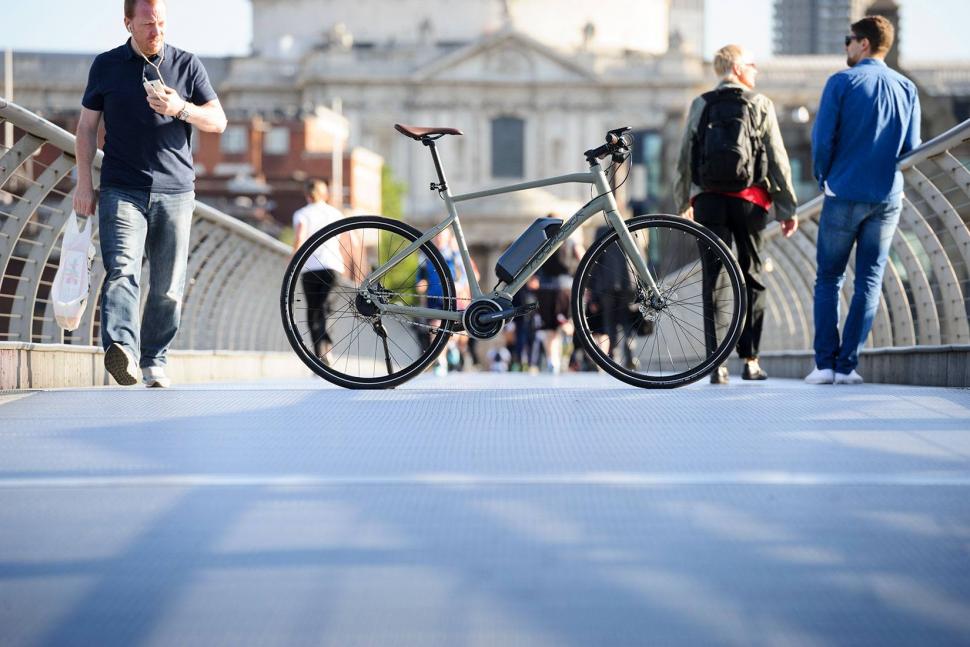 British brand Ridgeback has embraced the future with a range of e-bikes, with its new Flight series comprising two models using the Shimano STEPS system, which neatly integrates the motor and battery into the frame. The Flight models combine a smart aluminium frame with flat handlebars, disc brakes and wide range gearing. Prices start at £2,499 for the E-Flight pictured above. 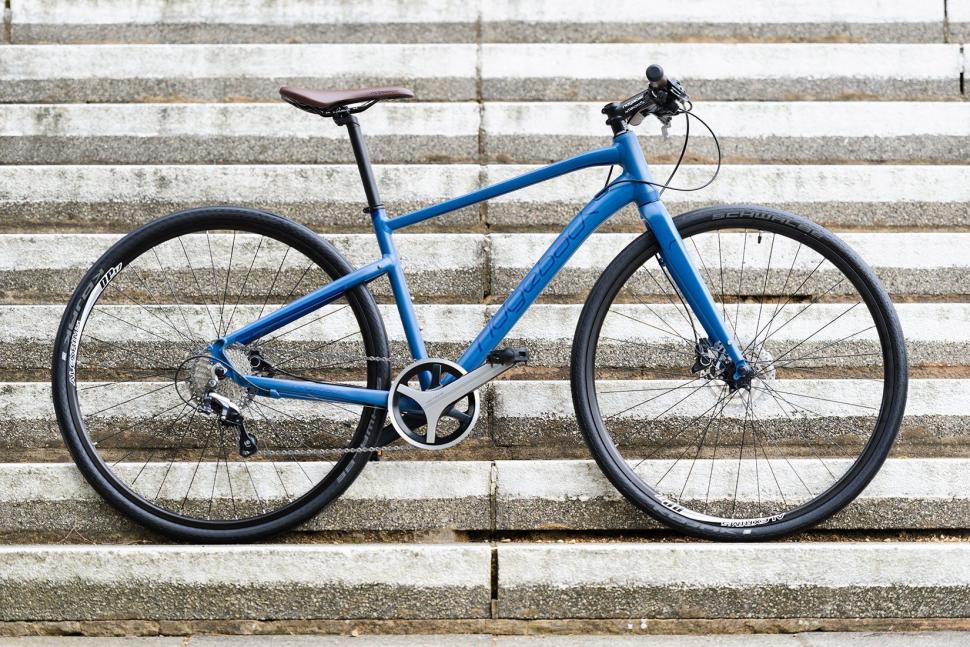 The Flight range also includes non-motorised bikes, and this Flight 04 uses Shimano’s latest Metrea groupset and costs £1,099. The Flight range starts at £699 if you want a cheaper option for commuting or city cycling. 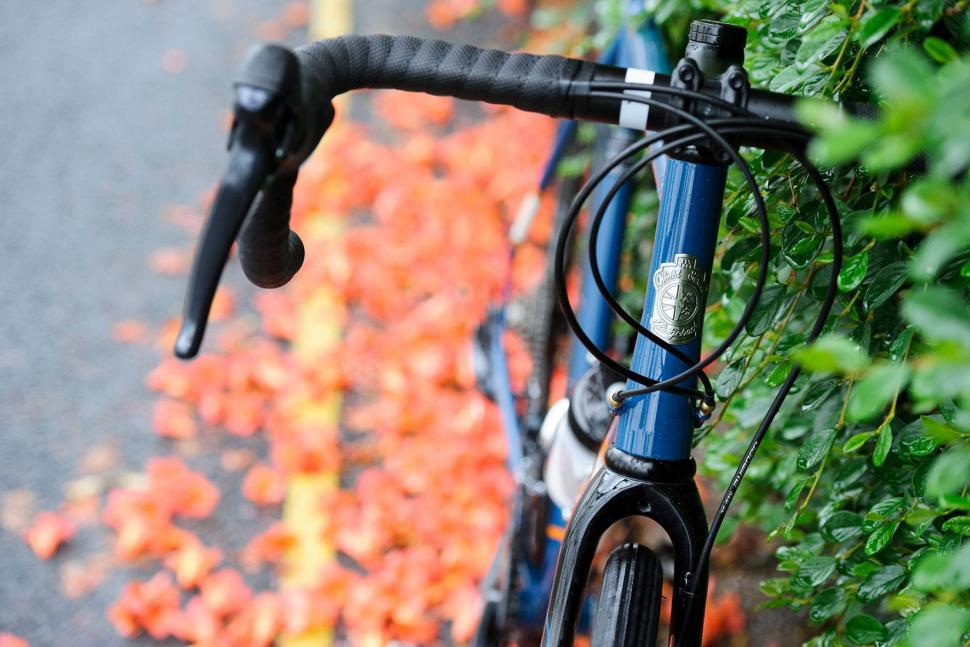 See the new Genesis bike range in the flesh 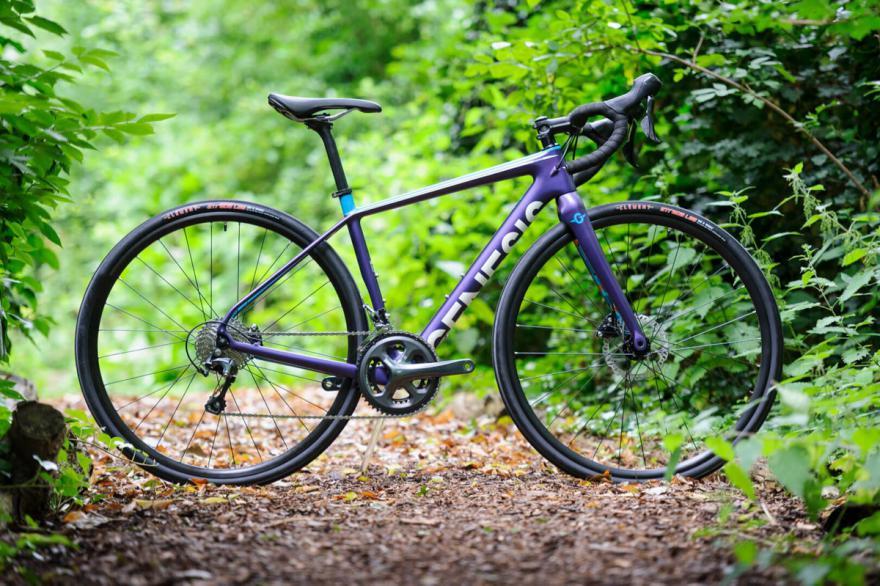 This will be the first public outing for the 2017 range of road, touring and adventure bikes from another British brand, Genesis Bikes. Top of the list of the bikes you want to see is likely the Datum, a carbon fibre adventure road bike that was launched to critical acclaim last year, and continues with updated prices and specs next year. There’s now a women’s version, the Datum W, with customised component choices. 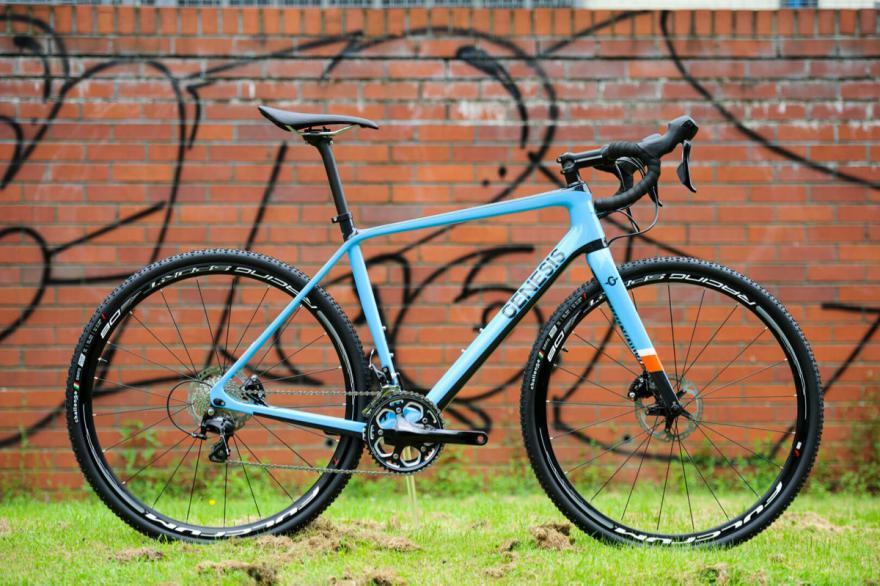 There’s also the brand new Vapour Carbon CX20 cyclocross bike to check out as well. It’s a carbon fibre cyclocross bike but Genesis reckons it has a geometry inspired by endurance road bikes, so it could straddle both on and off-road riding quite happily, as well as belting around a playing field for an hour on a Sunday morning. 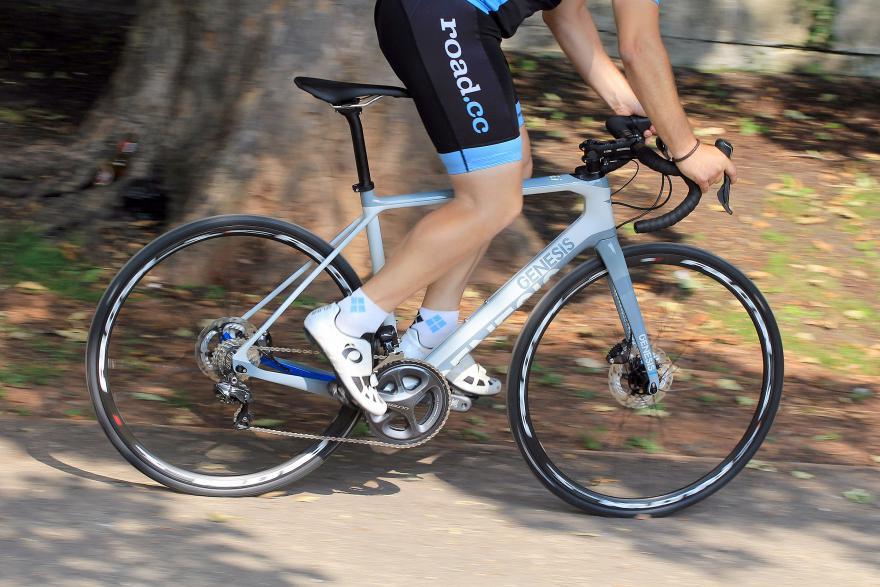 And of course, there is the updated Zero, which is now available with disc brakes. It’s the company’s race bike, used by the Madison-Genesis race team, but taps into the growing demand for disc-equipped race bikes, even if they can’t actually be raced yet. We’ve already reviewed the bike, as Genesis sent us a final production bike some weeks before the official launch to have a ride on. 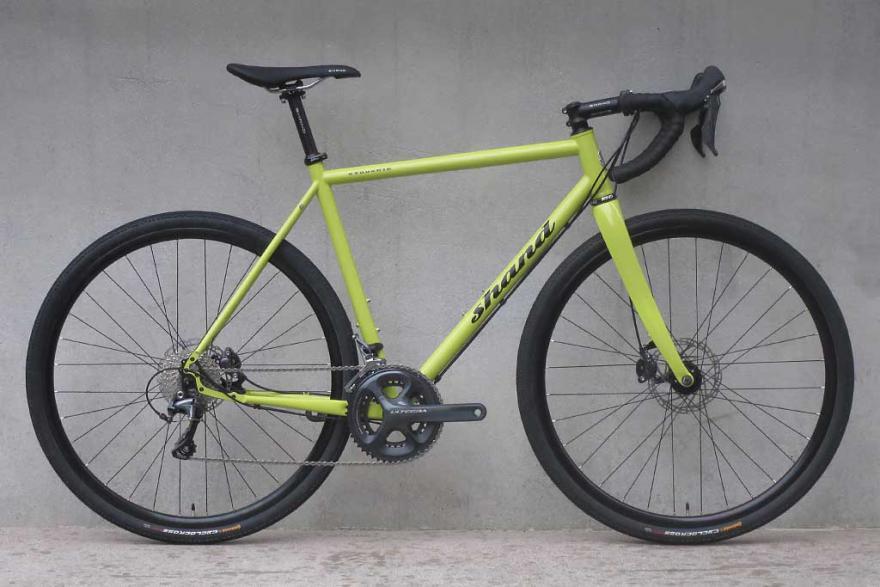 Scottish frame building company Shand will be showing its latest models, which include the new Stooshie, an adventure bike with space for 35mm tyres, and the Drove, a drop bar off-road touring bicycle that is fit for any size adventure you might have planned. Both bikes feature steel frames with carbon forks and brakes are of the disc variety. 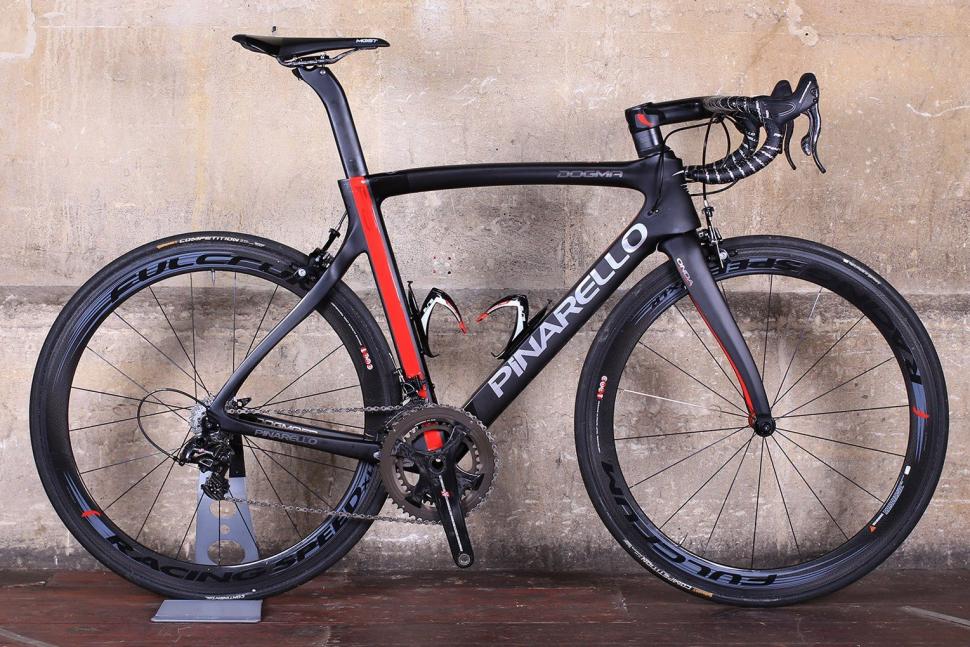 Read our review of the Tour de France winning Pinarello Dogma F8 and want to take a closer look at the bike for yourself? The Italian brand will once again be in attendance at the show with a fleet of Dogma F8 bikes and plenty more besides. They usually have something special on the stand and our guess is they’ll have Chris Froome’s actual Tour de France winning bike.

We saw them at Eurobike, and you’ll be able to see them at the Cycle Show. We’re talking about Fizik’s first venture into cycle clothing with a range of bib shorts that are designed around your level of flexibility and hip rotation, much in the same was as its saddles are chosen by spine flexibility. 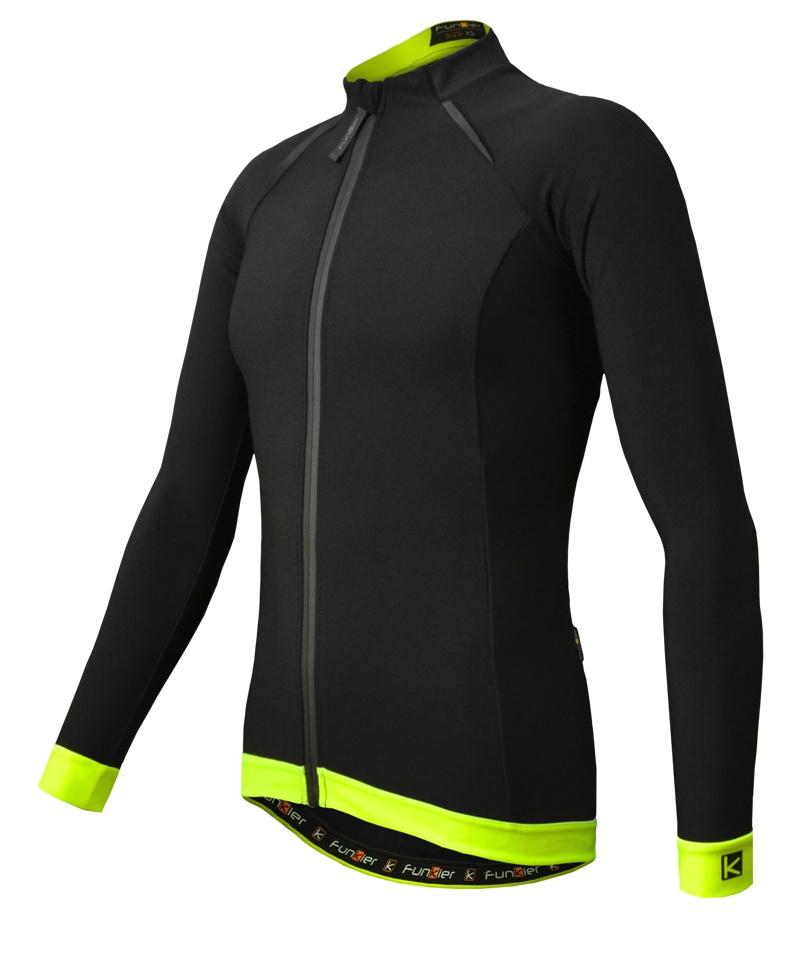 Clothing brand Funkier will be showcasing its brand new Repel Thermal jacket, just the ticket for the upcoming winter season. It’s water and windproof, has lots of reflective piping, zippered waterproof pockets and a comfortably fitted shape. It costs £75, and you can see it for yourself at the Cycle Show. 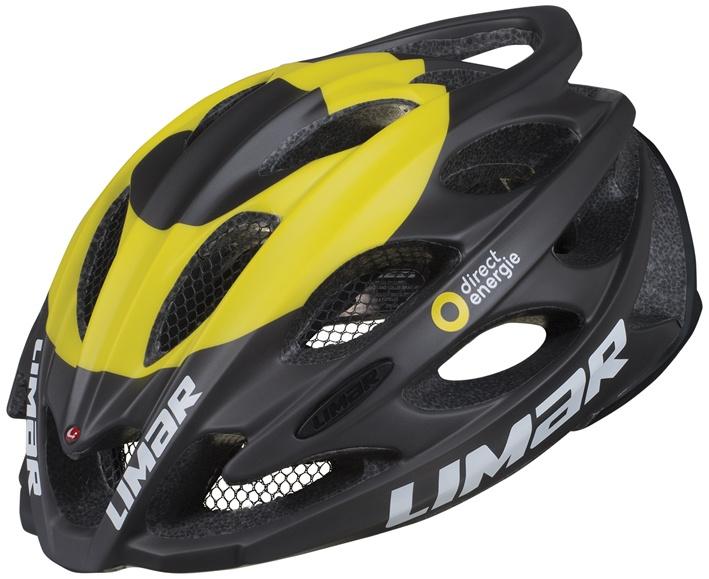 Helmet specialist Limar supplies products to the professional team Direct Energie and will also sponsor Astana from 2017 for three seasons. It will be launching its latest range at the show, including the £140 Ultralight + which is claimed to be the lightest helmet in the world - it weighs 175g. And for racers and low drag fans, there is also the Aero Road 007 helmet which costs £160.

See.Sense will be at the Cycle Show with its new Icon, a connected and intelligent light that can be paired with a smartphone so you can adjust the settings. The light is designed for the increasingly common daylight running with the addition of side illumination. Run time is more than 15 hours. road.cc has reviewed the light and rated it very highly, you can read our review here and of course see it for yourself at the show. 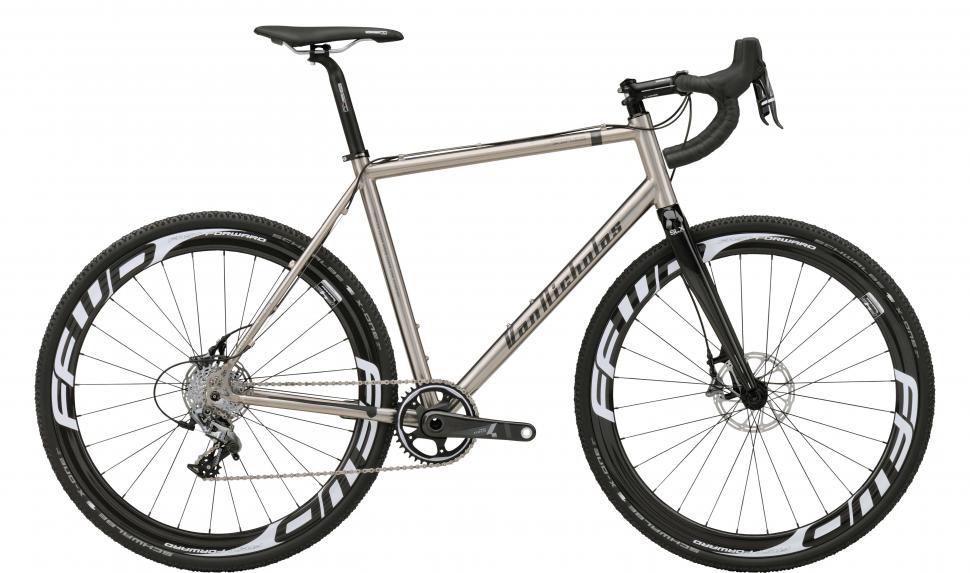 Dutch titanium specialists Van Nicholas will be displaying its range of bikes, from road to mountain bikes, but we’ve picked out this nice looking Amazon Cross bike to show it. Cyclocross season is upon us, and the idea of a titanium-framed off-road bike with a simple 1x drivetrain really appeals to us. 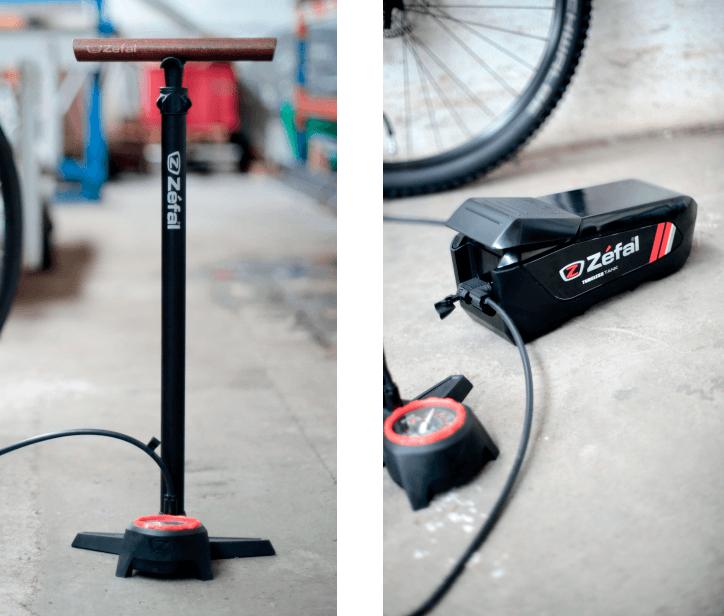 Zefal’s new Profil Max FP60 track pump and Tubeless Tank will be shown at the Cycle Show. The last product is quite interesting. As road tubeless has started to get more popular, we’ve seen more pumps aimed at providing the burst of air that is sometimes required to seat a tubeless tyre. Tubeless Tank is a foot pump which you inflate up to 230 psi, then release the air in one sudden whoosh to inflate the tyre and pop it onto the rim. The Profil Max FP60 features a large reinforced base for stability, a magnified gauge and the company’s own Z-Switch chuck for easy transition from Presta to Schrader valves.

Simplon arrives in the UK 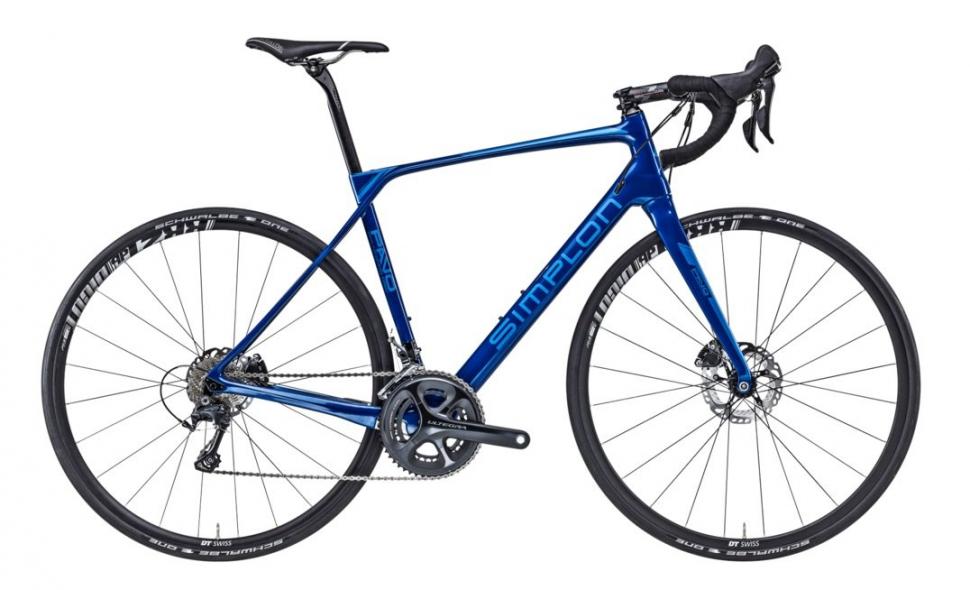 Austrian company Simplon is a new bike brand that is arriving in the UK and one of the bikes on its stand will be this Pavo Granfondo Disc road bike. It’s packed with the most modern of details including 12mm thru-axles at both ends with disc brakes and flat mounts. It’s a bike obviously designed for long rides and providing comfort, so Simplon has flattened the seat tube and uses Vibrex technology in the rear stays to provide improved damping qualities. 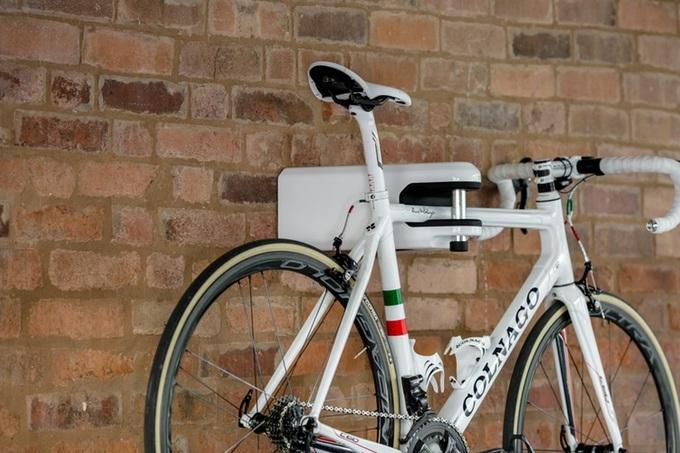 The Airlok, bike storage and security device rolled into one, has smashed its £70k Kickstarter goal and you’ll be able to see it for yourself at the Cycle Show. Airlok is a wall-mounted bike rack with an integrated hardened steel lock and designed to be used either indoors our outdoors, with a maximum gold level security from the patent pending ‘closed loop’ design. You can read more about it here 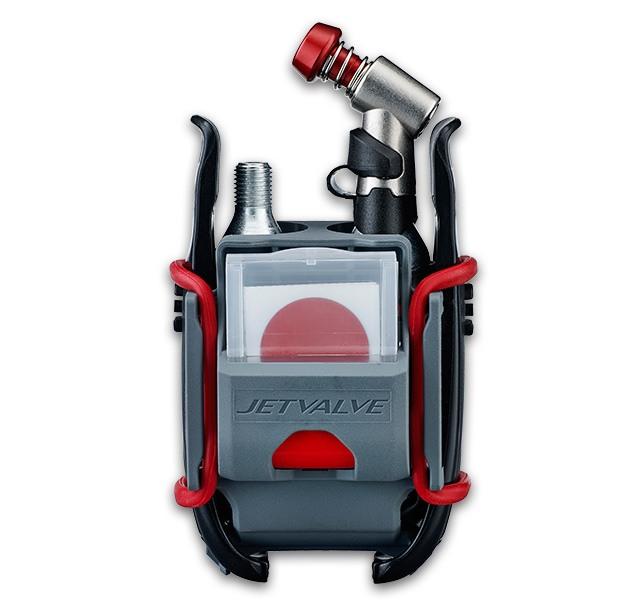 Looking for an easier way to cart your essential tools around on the bike? The Jetvalve Smart System provides a nifty way of carting everything you need to fix a flat in one compact package that can easily be stowed in a backpack or saddle bag. It accommodates a pair of Co2 canisters and inflator head, two tyre levers and a packet of puncture repair patches. 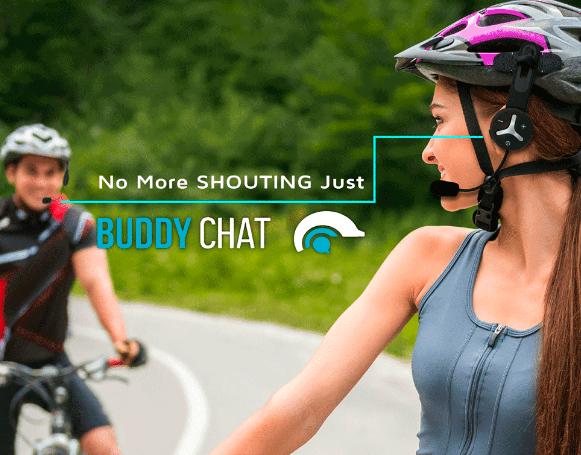 Want an easy way to chat with a friend while out cycling without having to ride alongside them, or having to shout to have over the traffic and wind noise? Buddy Chat is a handsfree Bluetooth communication device that can be fitted to the side of a helmet and has a range of up to 1km so you can speak to a fellow rider without having to be right alongside them. Such systems are popular with motorbike riders, so it’s interesting to see it being brought to the cycle market. Is there a demand for this sort of product? You can check them out at the show next week. 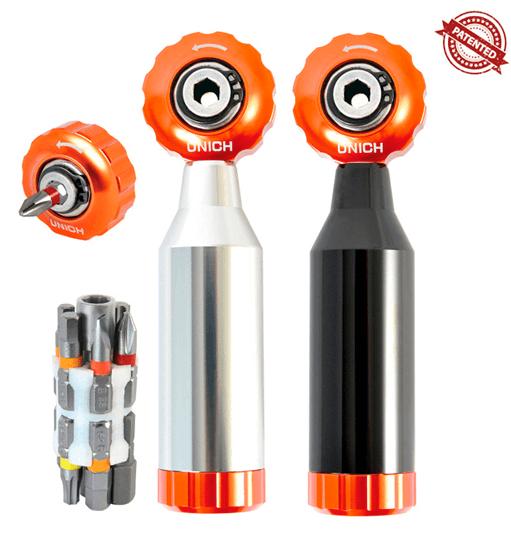 Unich has developed the Stepless Ratchet Multitool that is small and compact, about the size of a Co2 inflator and offers a range of tool bits ideal for carrying out most roadside repairs. The multitool has the advantage, claims the company, of providing infinite starting positions due to the miniature clutch mechanism, which can make it easier to work on bolts with limited access compared to a conventional multitool. 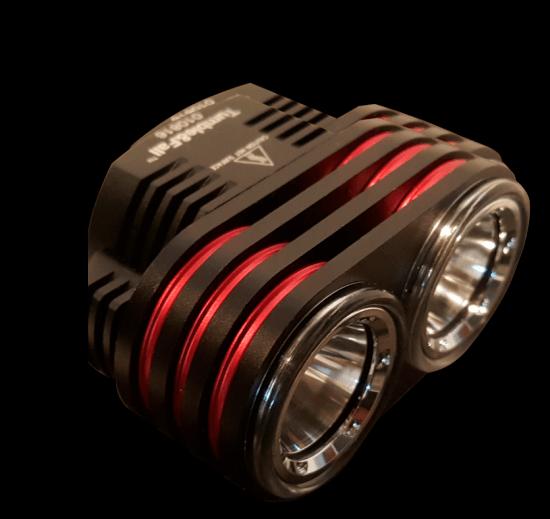 Winter will be here soon and already the nights are drawing in, and if you’re looking for a powerful front light that is ideal for both mountain biking and road cycling, then the new Halo light from Tumble&Fall looks the business. For just £90 it pumps out 2,000 lumens with two CREE led lights housed in a compact unit, with a separate battery packet that is good for up to 2.5 hours on the highest mode. Step the output down to 1,000 lumens and it’ll run for 5 hours.

nuun has updated its electrolyte tablet products with new Active and Boost, which feature a brand new formula that is now free of preservatives and uses only natural ingredients. They’re also vegan, gluten, dairy and soy free. nuun Boost uses a caffeine that has been sourced from organic green tea extract.

Topeak to unveil 2017 tools and accessories 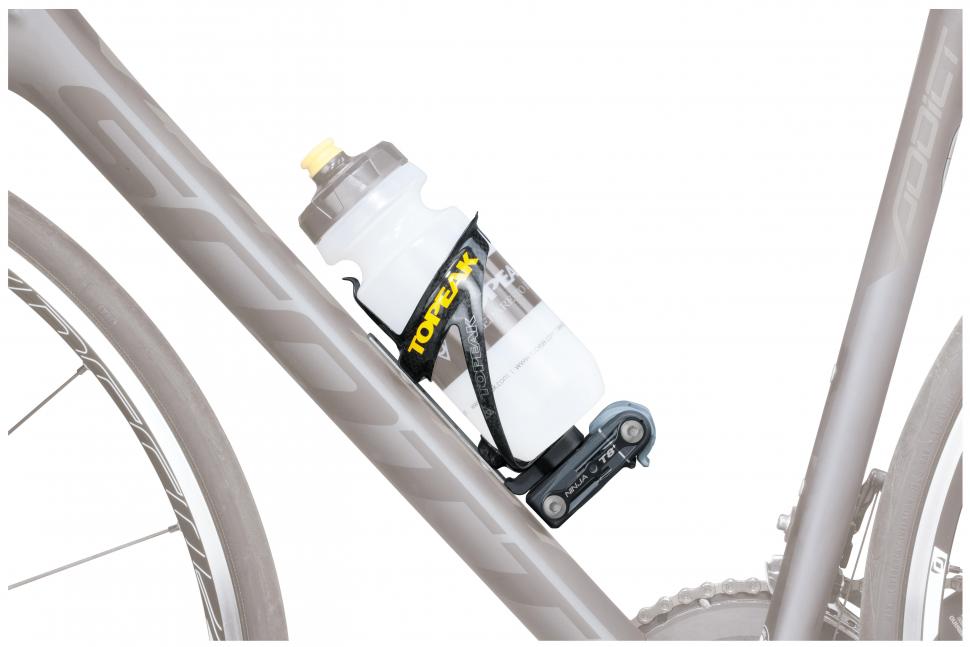 Topeak will be unveiling its brand new 2017 range of tools and accessories for the first time in the UK at the show. You can look forward to seeing new track pumps, triathlon bottle mounts, its new bikepacking range of bags and the Ninja series of concealed tools and pumps.

The show takes place at the NEC Birmingham and is open for three days, 23-25th September. Tickets cost £13,50 for an adult, but if you use the discount code roadcc it’ll only cost you £12. Buy your tickets here