Giro is releasing a range of shoes that uses a new closure system called Techlace, a hybrid lace and Velcro strap system, plus a Boa dial. Giro reckons that Techlace offers you the comfort and fit of laces, and the convenience of straps. The flagship Factor Techlace (men’s) and Factress Techlace (women’s) models feature Easton EC90 SLX2 carbon outsoles.

Let’s talk about the closure system first because that’s the most interesting innovation here.

Up top you get Boa IP1 dials that control the upper straps. They mirror one another in action (in order to tighten, you turn the one on your right foot clockwise and the one on your left foot anticlockwise) and allow you to adjust the fit in both directions in 1mm increments (typically, a ratchet type buckle will give you jumps of 3mm in tension). 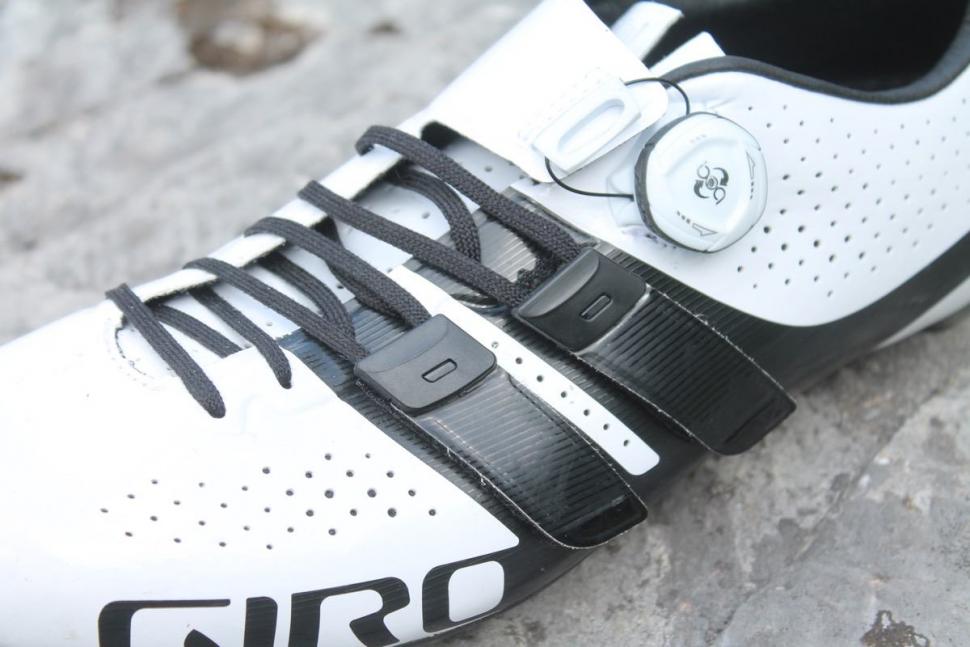 Below the Boa dials, though, you get the hybrid lace/Velcro strap Techlace system, and that’s the new bit.

Laced shoes have become popular again over the past few years, not least in the shape of Giro’s Empire models. Laces can be light, they’re likely to survive a crash, and the retro styling often looks pretty cool. On the flip side, adjusting the tightness of the closure on the fly is a tricky operation.

The Techlace system seeks to sidestep that issue by allowing you to alter the lace tension via Velcro straps. A picture paints a thousand words: check out the photos and you’ll get a good idea of how the design works. You move the Velcro tabs outboard to tighten things up. In practice, you’ll probably set the lower tab once to suit your foot volume, and then leave it in that position for ever more, moving only the upper tab and the Boa dial to get the shoes on and off, and perhaps mid-ride to alter the tightness.

It’s certainly a neat system and it’s very easy to use – as simple as normal Velcro straps. I’ve spent the past couple of days trying out the new Factor Techlace shoes on rides with Giro in Switzerland ahead of the massive Eurobike trade show that opens later in the week.

I’ve used Boa dials plenty before and I like them a lot. They’re super-easy to adjust and the steel lace (seven strands of steel are wrapped together in a nylon cover, then seven of those groups are wound together to form a complete lace) has never yet broken on me. I don’t imagine it ever will.

The Techlace system works equally well. The Velcro adjustment performs exactly like any other Velcro strap but you get more anchor points for a more customised fit. As you’d expect, adjusting the fit while you ride could hardly be easier. It’s a one-handed operation that you can perform without taking your eyes off the road (I won’t go into the performance of the shoe as a whole here. I’ll save that for a proper review once I’ve got a few weeks of use into the Factor Techlace. Early signs are really promising, though).

The Techlace system has a lot of adjustability but if there’s too much or too little strap for the width of your foot, you can swap to a lace of a different length. The plastic ends of the lace – called aglets, fact fans – snap into place inside a little plastic coupler at the end of the Velcro strap. You can buy the laces – which are slightly springy – in 12 different lengths. You can also get the laces in six different colours, and the Boa IP1 dials in four different colours, so there’s plenty of customisation on offer here.

All of the different elements of the new closure system are quickly and easily replaceable if they get damaged or worn out.

As I mentioned up top, the Factor Techlace and the Factress Techlace are the top-of the-range shoes to feature this new closure system. These models use one piece uppers made from a Evofiber SL fabric from Teijin.

They also come in their own zipped travel bag.

We don’t have UK prices yet, but it’s €350. If you don’t want to spend that much, Giro is offering the Techlace system on cheaper Sentrie (men’s) and Raes (women’s) shoes.

Rather than a Boa IP1 dial, these use a Boa L6 instead. You still get the 1mm increment tightening function but you don’t get the same facility in the opposite direction. Instead, you pull the dial up to release the tension, and you have to readjust from there.

Giro is launching one more Techlace shoe too, although it’s keeping it under wraps until the Eurobike Show opens later in the week. We’ll show it to you once we’ve had the chance to see it for ourselves.

Again, we don’t have UK prices on the Sentrie and Raes shoes, although they’ll be priced at €250 – so €100 cheaper than the Factor Techlace and Factress Techlace.