Mason Cycles has unveiled two new 'AdventureSport' bikes under the Bokeh name, its first new models since the brand launched with the Resolution and the Definition at the start of 2015.

Last week we showed you the new Aperture2 fork that Dom Mason has been developing and suggested that you stay tuned to road.cc for news of further projects that are in the offing. The Bokeh, available in both aluminium and titanium, is the first of these and road.cc is the first to release the news.

The bikes in these pictures might look a bit raw but bear in mind that these are prototypes and the aluminium Bokeh will come in a choice of two different colours. So what exactly is the Bokeh?

“It’s an AdventureSport bike,” says Dom. “It’s a response to this move in cycling towards venturing off road and using bigger tyres, disc brakes and lightweight packs and having adventures, but not necessarily on bikes with masses of luggage. 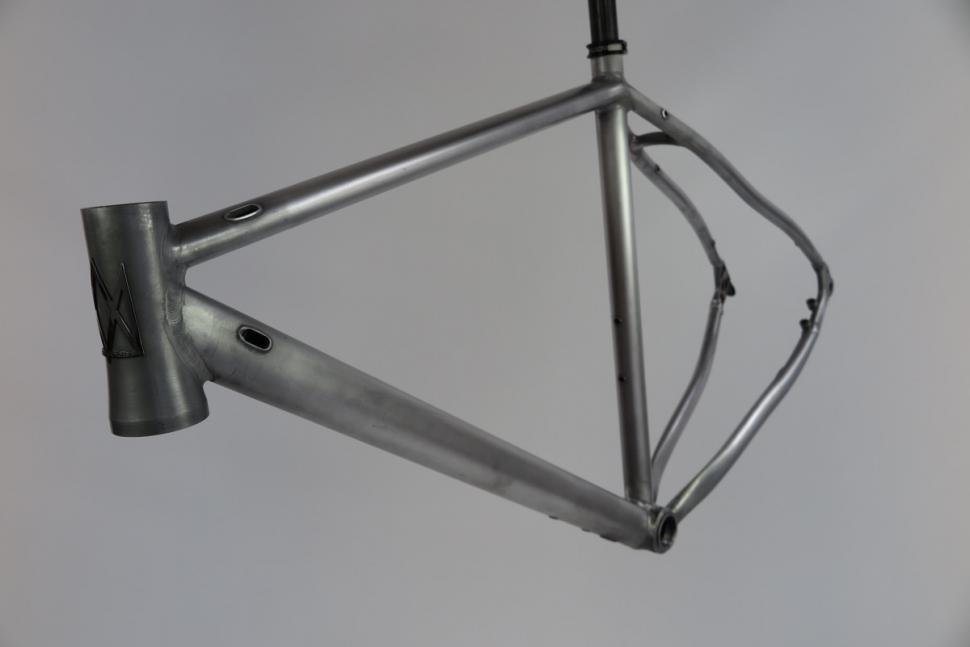 “To us, AventureSport is when you’re out there underneath a mountain, riding fast. I come from an off-road background – the first frame I designed was a Kinesis off-road frame – and now we’re getting back into that off-road stuff.

“We’re not talking about gravel. The word gravel sounds a bit dull to me. AdventureSport is about doing it fast. That’s what our original Mason bikes do well, and that’s what we’re continuing here.” Dom sees the Bokeh as following in the footsteps – or tyre tracks – of the Resolution and the Definition in that it’s designed to be ridden over long distances. The Mason brand’s 'FastFar’ mantra is something that cropped up a lot in conversation when Dom came visiting road.cc a couple of weeks ago.

Check out our review of the steel Mason Resolution 105 Hydro here.

Check out our review of the aluminium Mason Definition here.

The brand has become associated with this aspect of cycling partly as a result of Josh Ibbett winning last year’s Transcontinental race (TCR) on a Mason Definition. This year five competitors will be tackling the TCR on Mason bikes with Josh competing on a Bokeh Ti final production prototype.

“As part of the Bokeh Ti development process, Josh rode this Bokeh Ti at the Tuscany Trail where he had a two hour lead before he was attacked by a dog,” says Dom. “Otherwise, his feedback was excellent and we’re really confident in the design”.

The Bokeh’s geometry is new. The frame angles are slacker than those of the existing Mason bikes, the wheel base is longer, and the head tube is a touch taller, but the bike is still designed to be sporty. “The idea was to keep the stack height [the vertical distance from the centre of the bottom bracket to the top of the head tube] quite similar to the bikes we’ve done already,” says Dom. “I didn’t want to have a really long head tube like a traditional gravel/adventure bike, because the idea is that you can get quite low if you want to. It’s not so aggressive that your neck hurts, but I wanted a bike that could cover a lot of different types of terrain fast. I didn’t want it to feel too upright and I wanted it to accelerate and climb well." Both the aluminium and the titanium versions of the Bokeh are built in Italy. The aluminium one is made from custom formed/shaped Dedacciai tubing. Mason developed the down tube with Dedacciai to the same D-shaped profile as you’ll find on the steel Resolution. “It’s a signature shape for us and it gives a big weld area so it really works,” says Dom. “Dedacciai have been great. They’ve made us our own tooling so no one else has this down tube". “Dedacciai also puts our own custom bends in the stays. The chainstays are almost dropped. This avoids chain slap and provides clearance for the brakes, plus along with the unique seatstay shaping [Mason calls them Boatail stays], it means we get more comfort.”

Mason has also worked with the Italian frame builders to develop a thru axle flat mount with integral mudguard/rack mounts. The aluminium Bokeh will be supplied with the same fork as pictured on the Bokeh Ti (below), not with the TRP one fitted on the version pictured above. The Bokeh Ti is made from a mix of custom formed Dedacciai, Reynolds and Rewel titanium tubing. Dedacciai made Mason a D-shaped down tube, an oval top tube, and a custom bend in the stays. The frame is built with 3D printed, hollow titanium dropouts from Reynolds. 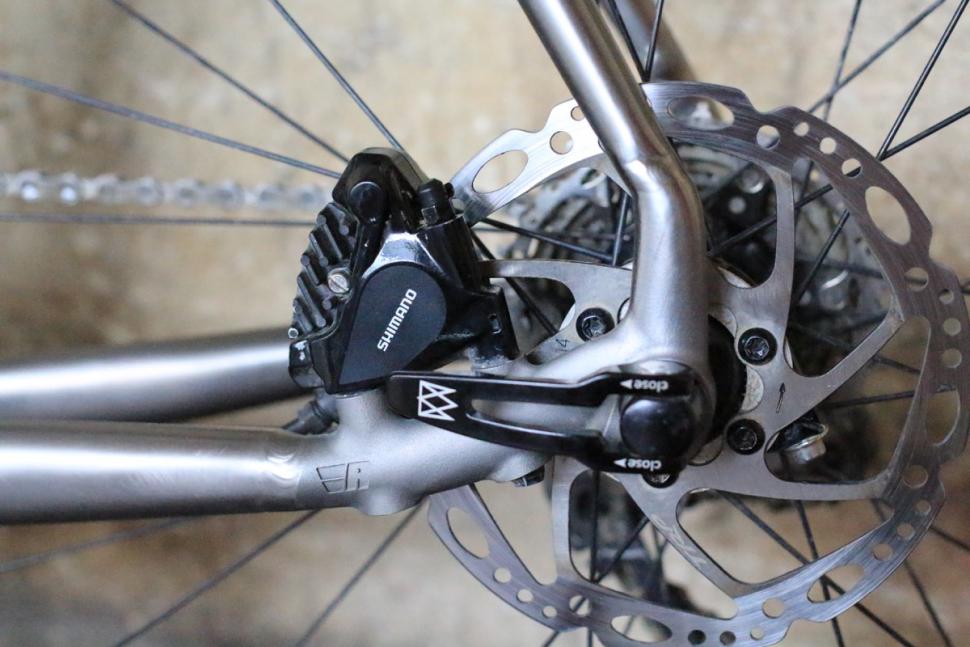 Reynolds has been developing 3D printed titanium dropouts for a while but not in the exact form that Mason wanted for a 12mm thru axle and a flat mount disc brake. Mason helped in the development of these dropouts (internal structure below) and will be the first to use them on production frames, although other frame builders will be free to use them as well. “The Reynolds dropouts have tiny pin marks over a very thin 'cover' that hides drillings for Di2 and mudguards,” says Dom. “If we require Di2 and/or mudguard mounts on a frame we’re having made, the thin titanium part can be removed and then we can thread it for mudguards or pass the wire through the Di2 port. It’s all very neat and only achievable with 3D Ti printed parts.”

Check out a video of Charge's 3D printed titanium dropouts from a couple of years ago. The Bokehs aren’t fitted with the Aperture2 fork that we told you about last week, but the carbon fork that has been developed in conjunction with the Italian supplier for these bikes does have eyelets on the inside of the legs and a 5mm eyelet at the front for fitting a dynamo light.

The fork has a 400mm crown height and, like the frames of both the aluminium and the titanium Bokehs, it has enough clearance to take a 650b wheel fitted with a 50mm wide tyre or a 700c wheel with a 41mm tyre. It uses the Mason F-Stop thru-axle that was developed for the Aperture2. 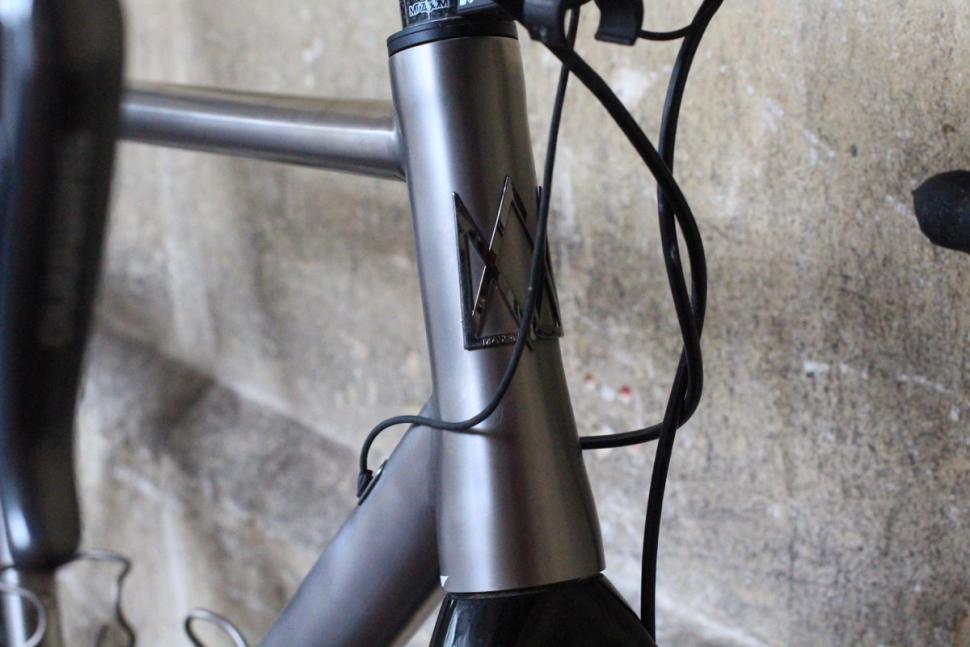 The Bokehs will be available from September in complete bike options, including a couple of SRAM 1x builds, and also as frameset only.

Bokeh prices have yet to be finalised but the aluminium version is likely to be similar to the Definition, so around £2,100 for a Shimano 105 build. The Bokeh Ti frames are built by a small maker in the mountains of northern Italy. The frameset – including fork, headset, seat clamp, MultiPort inserts, F-Stop thru-axles and all bolts – will be around £2,500, with a SRAM Force 1X 650b build coming in at around £4,300. One final thing:  what the hell does Bokeh mean?

According to the road.cc Dictionary of Words and That (okay, the internet), bokeh is “the visual quality of the out-of-focus areas of a photographic image, especially as rendered by a particular lens”.

So, if you didn’t already know, you do now.

“I think it has that adventure feel and sounds mysterious. It also reminds me of the blur from heat haze on a desert adventure and it follows the Mason way of using terms from photography,” says Dom.