Twice Tour de France winner Alberto Contador crashed on both stages one and two of this year’s race but he’s battling on despite his injuries. The Tinkoff rider is racing most stages on this Specialized S-Works Tarmac with a special chrome finish. 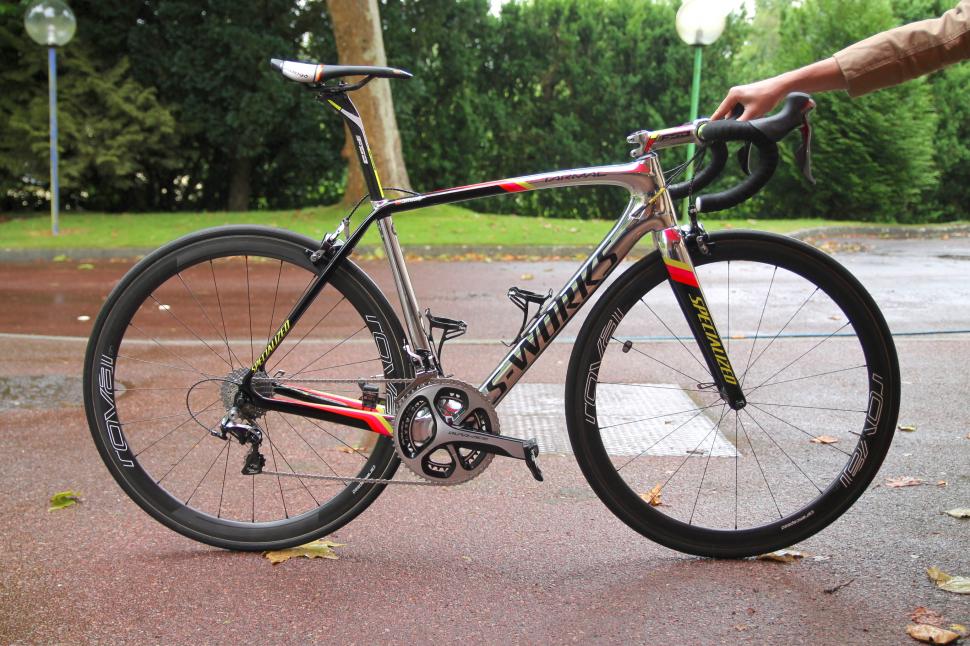 The frame is made from carbon-fibre, of course – what Specialized calls its FACT (Functional Advanced Composite Technology) carbon. It is built to a compact design with a sloping top tube. It also comes with a tapered head tube, and the cables run internally. One of the major talking points, though, is the chrome finish that Specialized has given to the down tube, seat tube and head tube, and also to much of the top tube and fork. Applying the very thin layer of chrome is a very labour intensive and expensive process, but if you want something this eye-catching, that’s what it takes. 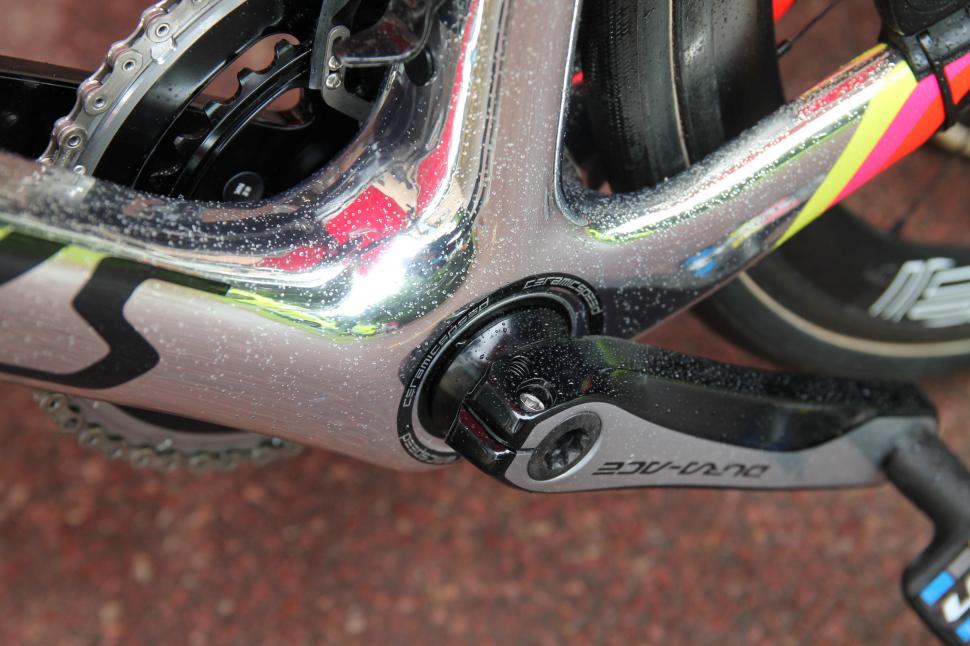 The stays and the bottoms of the fork legs are black, separated from the chrome by yellow, pink and red stripes. As you could probably work out for yourself, those colours represent the leader’s jerseys in each of the Grand Tours: the Tour de France, the Giro d’Italia and the Vuelta a Espana, respectively. Contador is one of only six riders in history to have won all three, the others being Jacques Anquetil, Felice Gimondi, Eddy Merckx (naturally), Bernard Hinault, and Vincenzo Nibali. 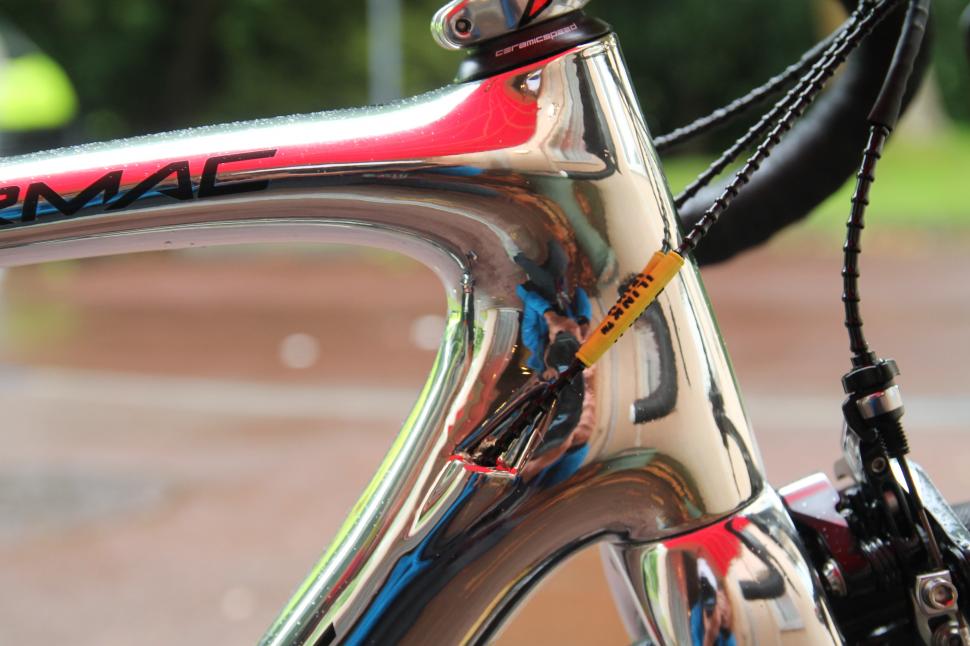 Specialized will make about 50 or 60 frames in this finish available to the public, although they won’t be cheap. That’s just rain you can see on the surface in some of the pictures, by the way. The finish itself is impeccable. Look carefully and you can see Dave’s reflection as he took the photos. FSA has continued the colour theme on the OS 99 aluminium stem and K-Force handlebar. The bar is made from unidirectional carbon-fibre reinforced with Kevlar. 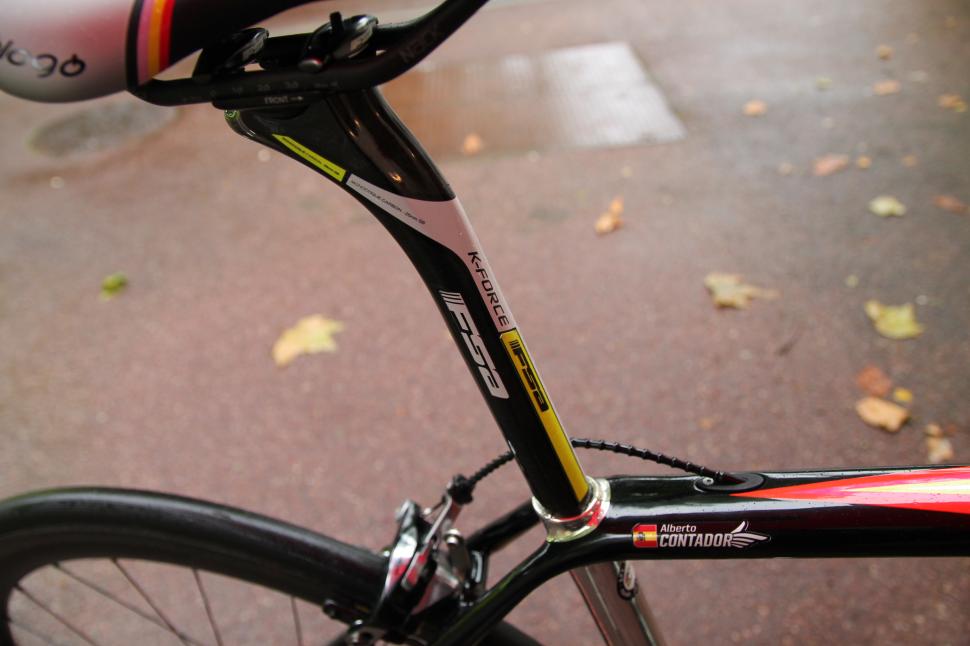 The seatpost is FSA K-Force too, and it’s also made from carbon-fibre, That little graphic alongside Contador’s name on the frame sticker is a hand in the shape of a gun, a reference to his El Pistolero nickname and his victory salute. 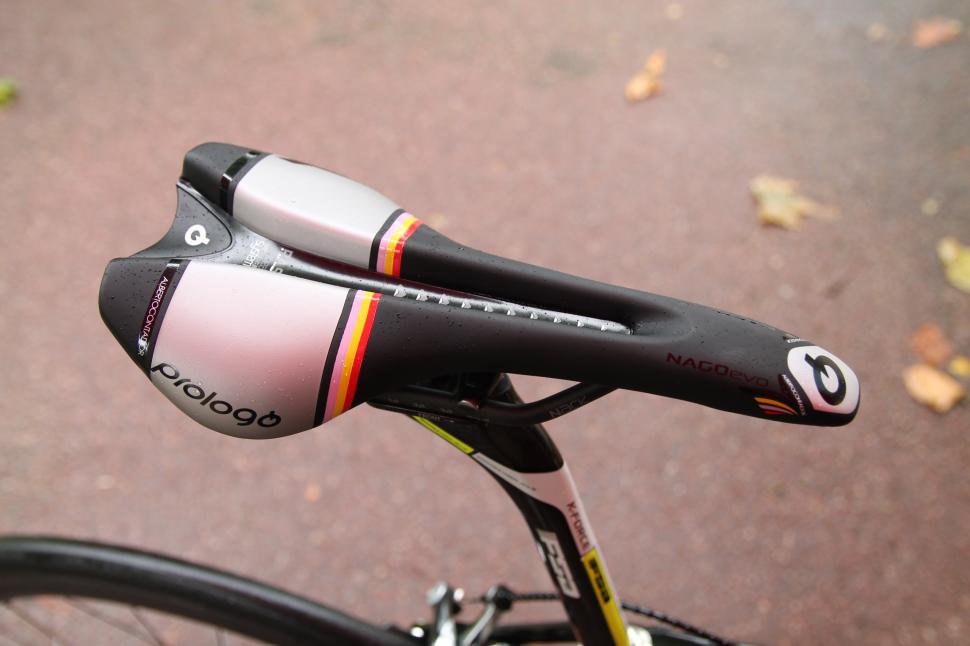 The Prologo Nago Evo PAS saddle has the same colour scheme as the frame, including the stripes, and it’s personalised with Contador’s name in several places.. 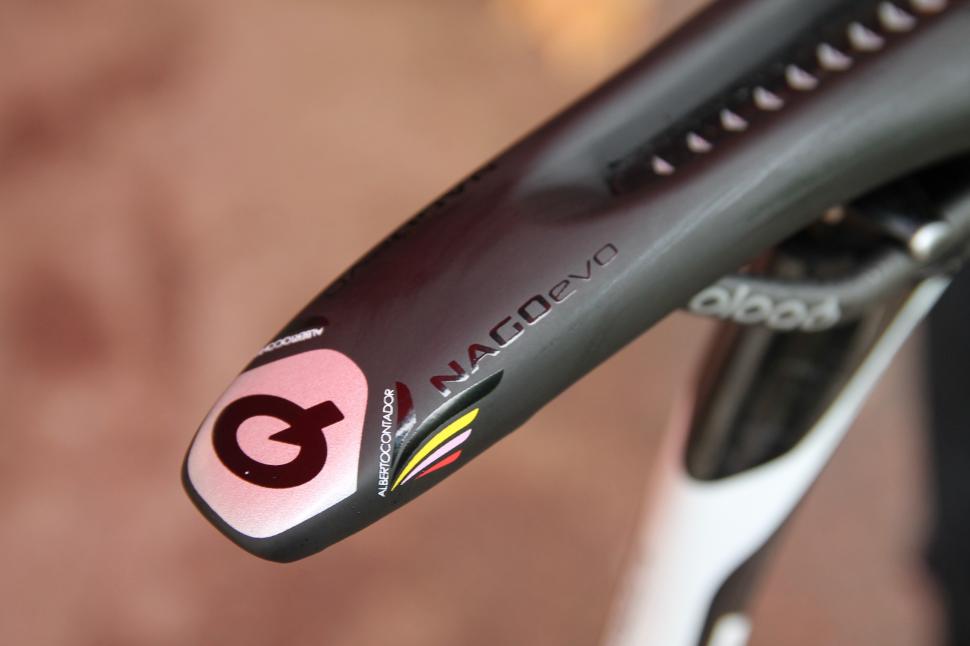 Tinkoff Saxo is sponsored by Shimano so all riders use Dura-Ace groupsets. Unusually, this bike is equipped with the mechanical version rather than with Di2 electronic shifters and derailleurs. Why? It’s apparently largely down to the mechanic. Contador’s mechanic prefers to work with mechanical components and Alberto is happy to go along with that. 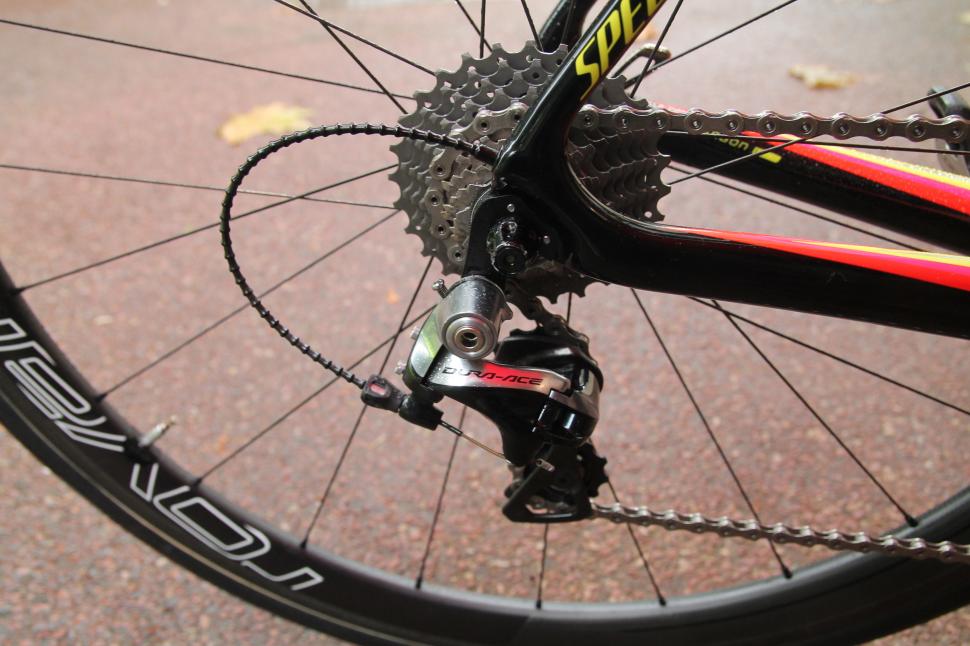 This is existing Dura-Ace 9000, by the way, rather than the new Dura-Ace 9100 that was announced last week. The teams aren’t expecting to take delivery of 9100 until the off-season and are hoping to get plenty of time on it before the 2017 season begins. 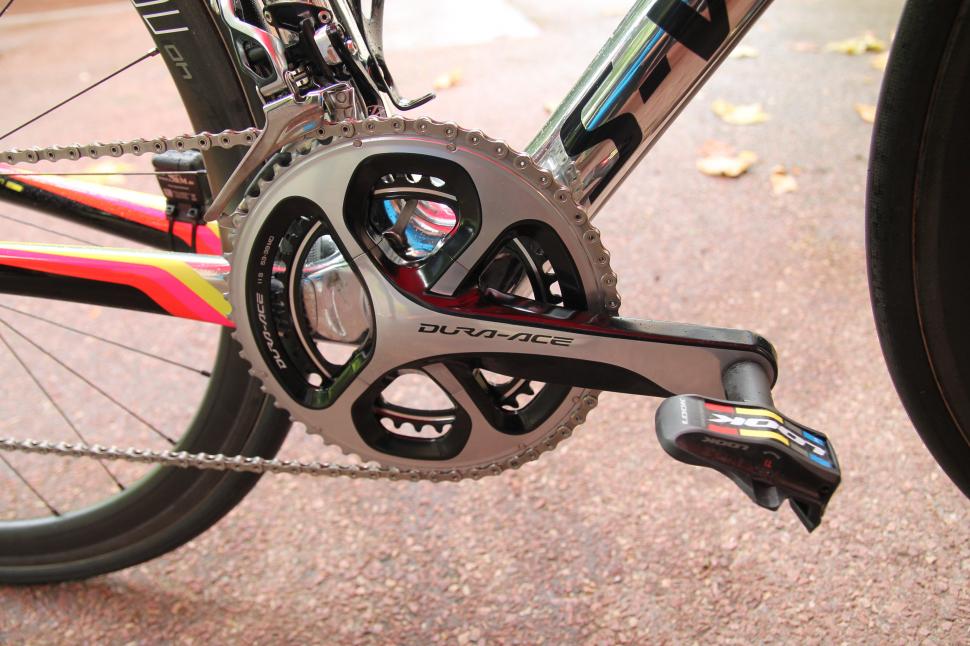 Contador uses 172.5mm cranks and this bike is equipped with a 53/39T chainset. Those are Look Keo Blade 2 pedals on there. The distinctive cables are Alligator i-Link – a system that we reviewed here on road.cc a few years ago. The tyres are Specialized’s own S-Works Turbo Gripton tubulars in a 24mm width.

For mountain stages Contador will use some other tyres that are made with a 290TPI poly-cotton casing and Specialized’s own Gripton rubber composition. They’re designed to be extremely lightweight (260g), with low inertia. The idea is that they’ll accelerate fast and will be particularly useful when trying to jump away from a group on the climbs. Not all riders will get these, just GC hopefuls like Contador. They're going to have to make a big, big difference to get him back into contention from the position he's in right now. 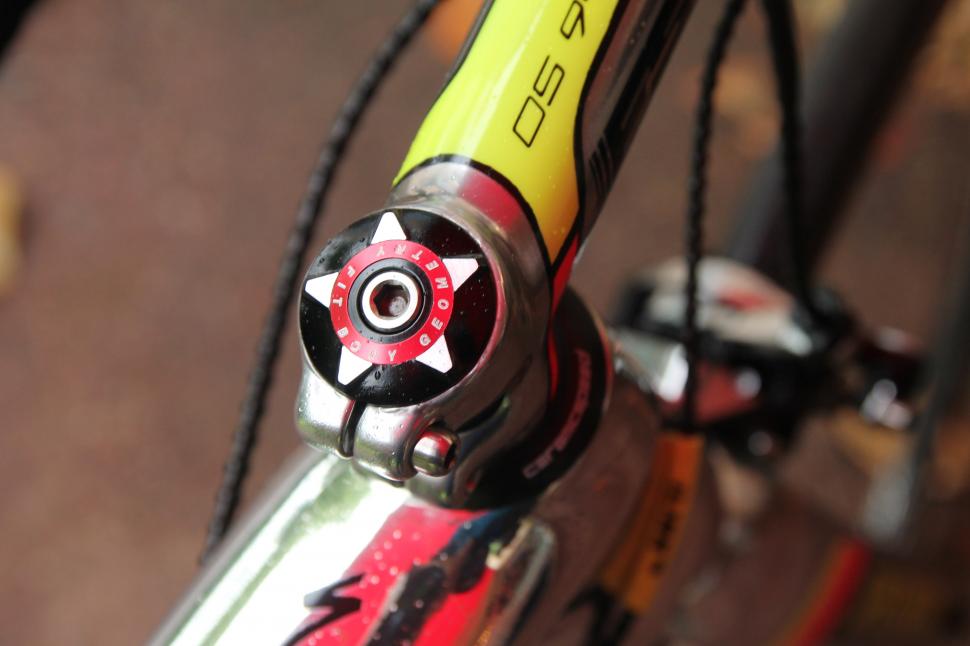 The flip-side of the low weight is a lack of durability. It'll depend on conditions but Specialized expect a lifetime of just 1200km (750 miles).

Only about 200 of these tyres will be made available to the public (perhaps only because pro racers have to use products that the rest of us are able to buy) at a retail price of €79.90 each. Anything we’ve missed? The bottle cages are carbon-fibre Tacx Devas, and K-Edge provides the chain catcher.