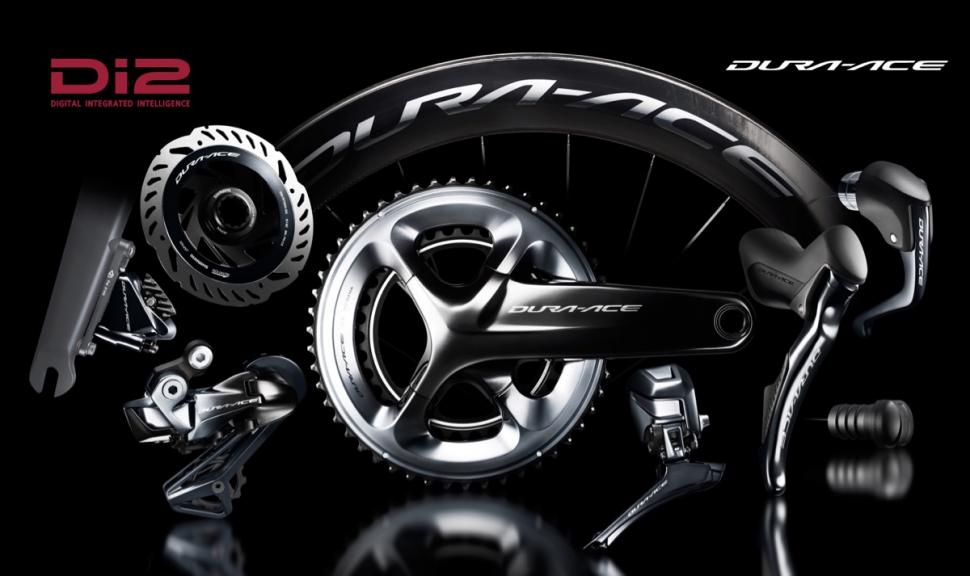 Shimano has revealed Dura-Ace R9100, the latest incarnation of its top-level road groupset that includes Synchronized Shifting – allowing you to control both derailleurs with one shift lever – a power meter and hydraulic braking, among other innovations.

The Japanese component giant is calling Dura-Ace R9100, “The most advanced system of road cycling components in Shimano’s 95-year history.”  Well, it would, wouldn't it?

Let’s go through the various elements of the design in turn. You might want to grab yourself a coffee, there’s a lot of detail here.

Bear in mind that although we’ve seen new Dura-Ace R9100 at a presentation in France today, we’ve not had the chance to use it yet, so nearly all of the information we are able to give you comes from Shimano without too much of a road.cc filter, if you know what I mean.

You'll also notice that we don't have photos of all components. Mr David Arthur is shooting more as I write and we'll put those in a separate story.

The 2 x 11 Hollowtech II chainset has a new look, larger crank arms that are asymmetric and, according to Shimano, an improved shifting performance. It’s also lighter than before, albeit by just 7g. Well, it all adds up, doesn't it?

Although it could be mistaken for carbon-fibre in the pictures and people have speculated about a change of material, the chainset is still aluminium. You can see in the picture below that the crankarm isn't symmetrical. Like the placement of the spider arms, it's designed to put the strength where it's most needed for the transfer of power. “Not only can the pure output of watts be measured, left and right legs can be measured separately, as well as cadence, giving you the truest measure of performance, isolated from external factors such as gradient, road surface and wind.”

The FC-R9100-P uses technology from bikefitting.com, a Shimano-owned company that specialises in bike fitting – you could have worked that out for yourself, right? – and bike measuring instruments.

The power meter’s strain gauges sit inside the crank arms to measure left and right leg power while the clever stuff – the brain, if you like – lives inside the spider. It’s compact and very discreet to the point that it's hardly noticeable.

You can change chainrings without affecting the power meter’s accuracy. The system checking and firmware upload can be operated via a smart phone or tablet PC through a Bluetooth Low Energy connection (E-Tube).

The power meter runs on an integrated battery. This is recharged with a magnetic adapter without the need to remove covers or casings.

Check out How to choose a cycling power meter.

As with previous versions, Dura-Ace R9100 offers both mechanical (cable operated) and electronic (Di2) gear shifting. Shimano doesn't seem to think there's any chance of putting Dura-Ace cable shifting out to pasture any time soon – not while it can still make incremental improvements.

Both mechanical and electronic systems can be combined with either hydraulic disc braking or mechanical rim braking, and can be set up on drop bars or time trial bars. “The introduction of hydraulic road disc brakes in the Dura-Ace lineup (see below) brings more control and confident braking in tough weather conditions,” says Shimano. “The hoods of the hydraulic levers (ST-R9120/70) are designed to incorporate the hydraulic reservoir and provide an ergonomic hand position, similar to the mechanical brake hoods (ST-R9100/50).”

They really are similar, the idea being that a rider can swap from one to the other without really noticing the difference. Although the hoods of the hydraulic levers are larger, there really isn't much in it. You could easily mistake the two different types at a quick glance.​

Shimano says that it has engineered more of a click into its Di2 shifters so you can more easily feel through your fingers whether you've pressed the buttons properly.

“Riders choosing Di2 electronic shifting can also customise the option for multi-shift either through an on/off switch on the lever or, for further customisation, through E-Tube software.”

Shimano Synchronized Shift is a new feature in electronic road groupsets, imported over from the world of mountain biking. It is “designed to simplify gear choice and reduce decision making in racing situations.”

“Shimano Synchronized Shift is designed to choose the next biggest or lowest gear ratio irrespective of whether a gear change needs to be made by the front or rear derailleur,” says Shimano.

• Full Shimano Synchronized Shift: the front derailleur reacts based on the rear derailleur’s shift action. This essentially means that, when activated, there is no need for two separate shifters to control front and rear derailleurs, the two buttons on one shifter will control both derailleurs.

• Semi Shimano Synchronized Shift mode: the rear derailleur reacts based on the front derailleur’s shift action, shifting to the next most appropriate rear gear when the rider makes a front shift.

Shimano sees this as being particularly beneficial in time trials and triathlons where you can have just one shift button per bar end shifter or base bar brake lever. One hand moves you to a harder gear, the other hand moves you to an easier gear. Easy peasy, even for simple people like wot I is. You don't need to decide whether or not to move the front derailleur, the system will do that automatically if required.

“Reducing the number of buttons simplifies decision making stress for riders and allows lever dimensions to be slimmed down by 28% (from 40mm wide to 29mm) and lever weight to be reduced by 22% (from 128g to 100g),” says Shimano. “Satellite shifters also incorporate this new one button feature.”

The front derailleur (104g, according to Shimano) and rear derailleur (204g) allow these new functions.

“Both electronic derailleurs are compact and designed to protect the shifting operation in the event of a crash,” says Shimano. “The low profile of the rear derailleur also comes with Shimano Shadow Rd technology, positioning the derailleur further below the functioning sprocket.”

This video from a couple of years ago shows how the XTR (mountain bike) version of Shimano Synchronized Shift works.

The Di2 derailleurs are connected via Shimano’s new EW-WU111 wireless unit that allows for an ANT Private connection between Dura-Ace R9100 and third party devices (hence the 'Wireless' element of the name; it's connected to the rest of the Di2 system on your bike via cables).

That new junction box is  very, very neat, replacing the quite a large junction box of the previous generation. A frame manufacturer can devise a port within the frame to hold it while leaving the adjustment button and recharging port accessible.

Shimano's sub-brand Pro has made up handlebars with the relevant holes that will presumably become available to buy at some stage.

“These components can be connected to Shimano’s E-Tube software, which supports the programmable aspects of the Di2 electronic gear shifting system,” says Shimano. “Additionally, via Bluetooth technology, this is accessible on smart phones and tablets.”

The latest version of E-Tube (2.11.1) allows individual rider profiles to be saved and downloaded to the bike, avoiding the need to re-program the system from scratch for each ride or race. The new front derailleur (above) doesn't have the long arm of the previous version. Shimano found this aspect of the design to be incompatible with wider tyres (28mm) on some bikes, so it has produced a more compact front derailleur that, it says, works just as smoothly. It also features a hex bolt that allows you to fine tune the shifting without the need for a barrel adjuster somewhere along the cable. It looks like another neat little update.

The direct mount low profile Shimano Shadow Rd rear derailleur (below, another import from mountain biking) is designed to be less exposed than the previous version in the event of a stack. A single cage length is compatible with all chainset/cassette combos (see below). 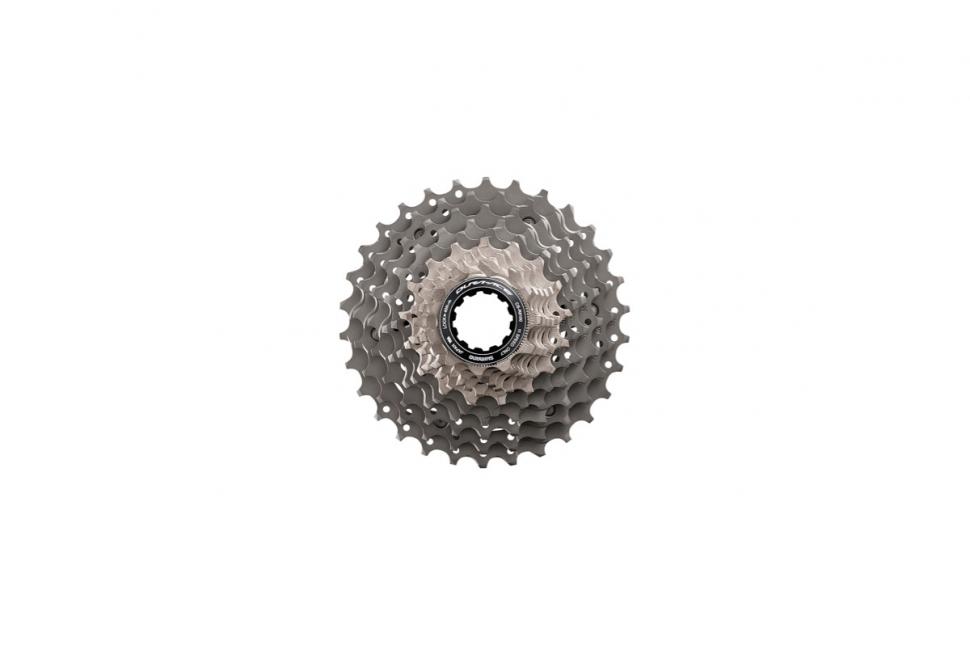 Previously, the largest sprocket size available on a Dura-Ace cassette was 28-tooth. Shimano has now introduced an 11-30 option (above) for an increased gear range. It remains an 11-speed system.

Shimano says that the stroke of the mechanical shift levers is shorter than previously and that the operation is lighter.

Check out our review of Shimano's existing Dura-Ace 9000 groupset. 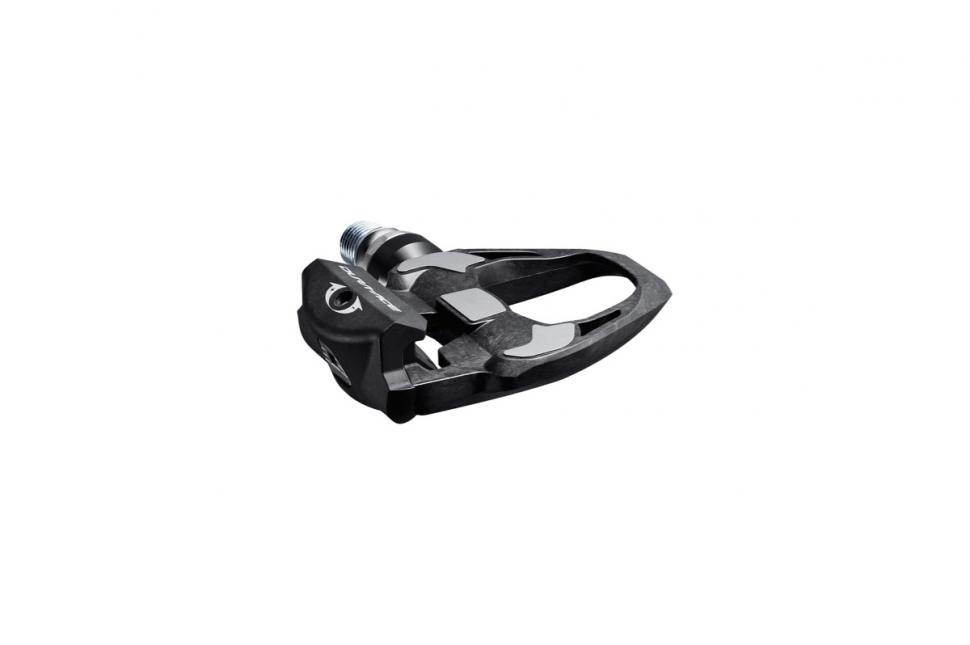 Shimano is also introducing a new lighter weight Dura-Ace pedal. They've kept the platform as wide as before while shaving off the grams.

Shimano has now incorporated hydraulic disc brakes into the Dura-Ace lineup for the first time. They were non-series (they didn’t belong to any groupset) previously.

“New dedicated Dura-Ace rotors bring better heat management properties to provide stability in brake performance,” says Shimano. “With an increased adaptor size, heat transfer through the rotor is decreased and more heat can dissipate through the air. This results in a 30°c reduction in rotor temperature over Shimano’s ICE Technologies Freeza rotors.” 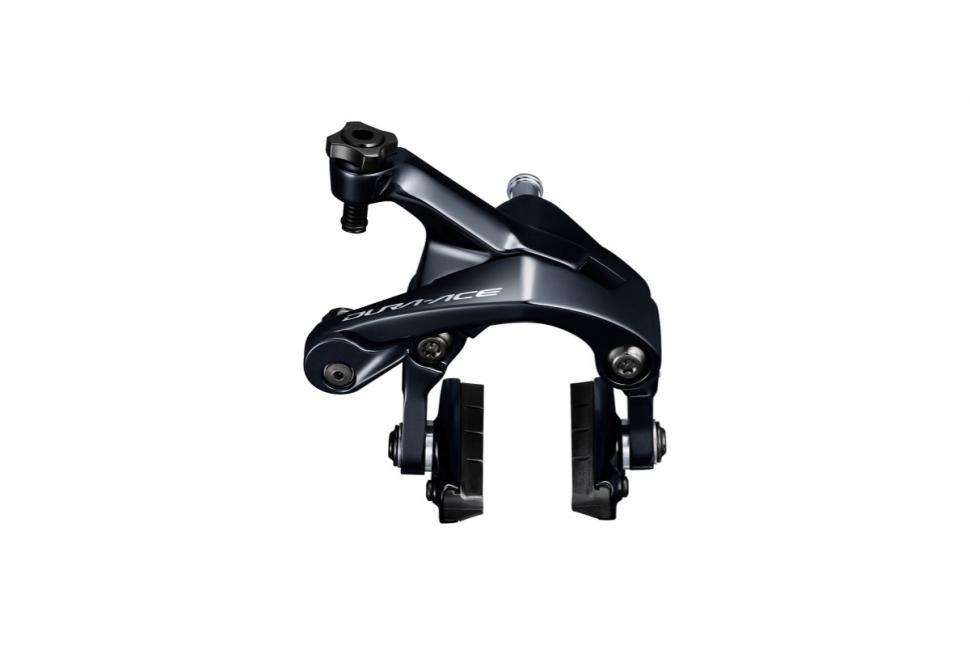 Rim brakes are available in dual-pivot (above) or direct mount options and they're now designed to take tyres up to 28mm wide. Shimano says that it has slimmed down the callipers – it's a very small amount, by the look of things – and added a booster between the pivots. “[The] new… C60 and C40 (above) rim platforms bring a stiffer wheel to enhance forward and side-to-side (lateral) power transfer and, with ultra-light carbon rim heights of 50mm and 37mm, are also designed to reduce air resistance,” says Shimano. “This allows Dura-Ace R9100 C60 wheels, in a real world scenario, to save 16W over Shimano’s current Dura-Ace 9000 C50 wheelset.”

Shimano doesn’t give any more information than that on its claim other than to say that this figure is based on all factors, not just aerodynamics. You don't gain 16W through aero efficiency but lose a proportion of that through increased weight, say.

The C50 wheelset referred to has a rim that’s 50mm deep and 24mm wide. 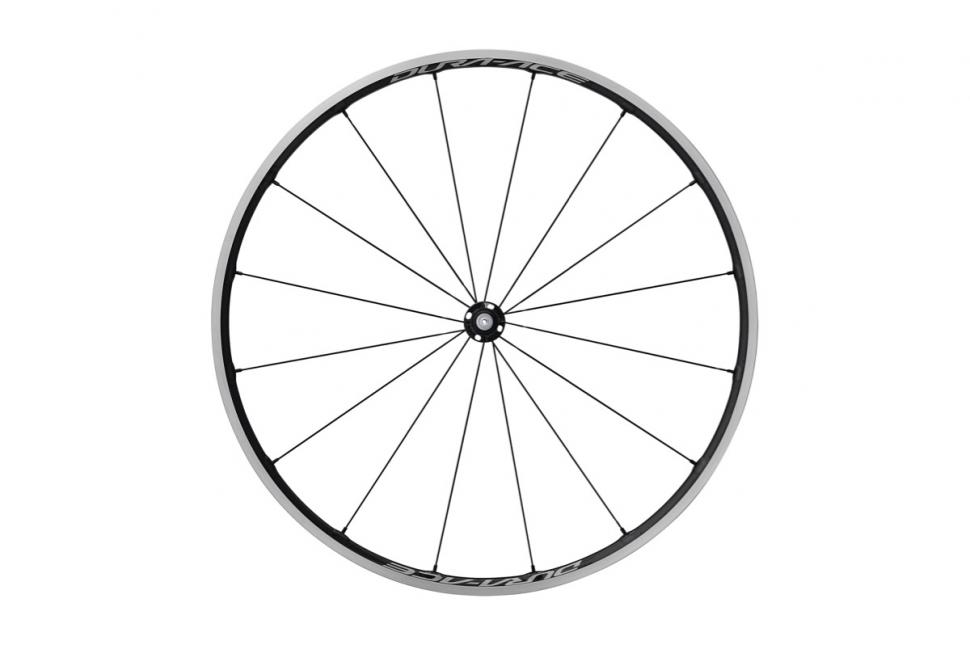 C24 wheels (above) – already in the Dura-Ace range – complete the lineup.

Selected wheels are available as clincher, tubular or tubeless versions with Shimano quick release hubs and the option of road E-thru axles (12mm).

How much will new Dura-Ace R9100 cost? Prices have yet to be released.