Redesigned road bike with a Shimano 105 groupset and TRP mechanical disc brakes for £1,300
by Mat Brett

The Vitus Zenium SL Disc is a newly redesigned aluminium road bike with a Shimano 105 groupset and TRP Spyre mechanical disc brakes for £1,299.99. On paper it looks excellent value for money.

We reviewed the Vitus Zenium VR Disc here on road.cc last year, and were very impressed. Stu said, “The new TRP Spyre equipped Zenium VR Disc model has a responsive ride backed up with excellent braking performance and modulation making it ideal for those spirited club runs or fast commutes.” 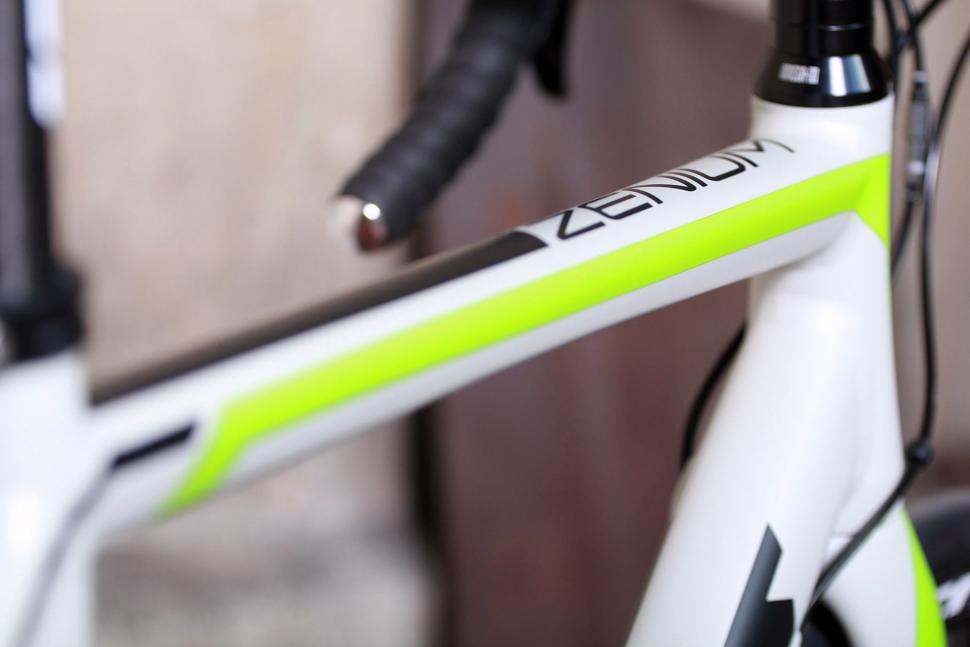 That gives us high hopes for the Zenium SL Disc. 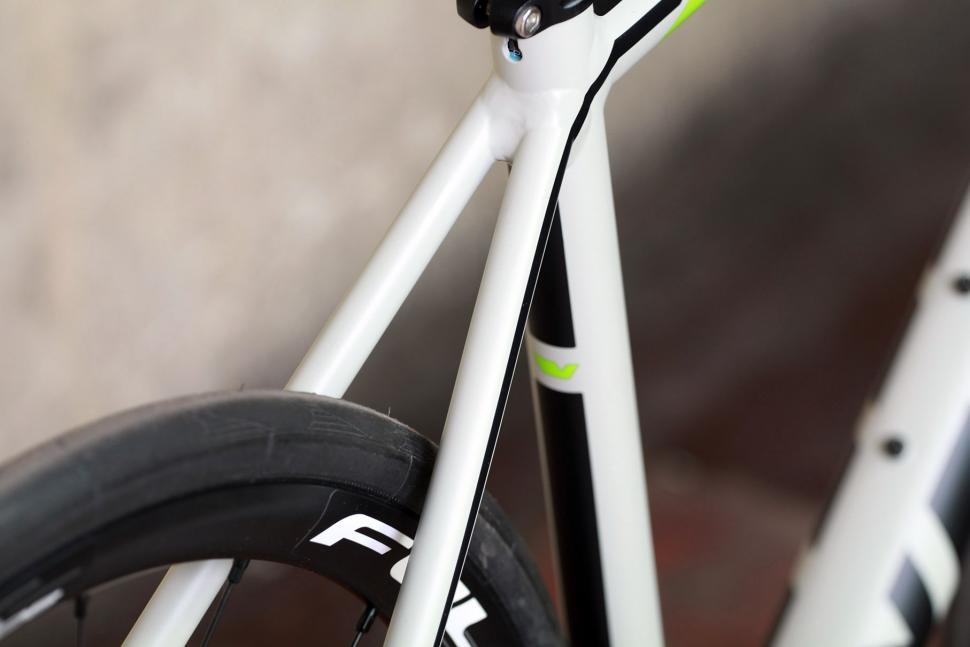 The welds have been smoothed to improve the appearance and Vitus has done without a brake bridge between the seatstays. There’s no need for one on a disc brake bike and Vitus reckons the lack of bracing here allows the frame to filter out road vibrations more effectively. The seat tube flares out towards the bottom bracket that’s, interestingly, an outboard BSA type. We do like the performance of oversized, pressed in bottom brackets but screw in ones like this don’t tend to creak as much. 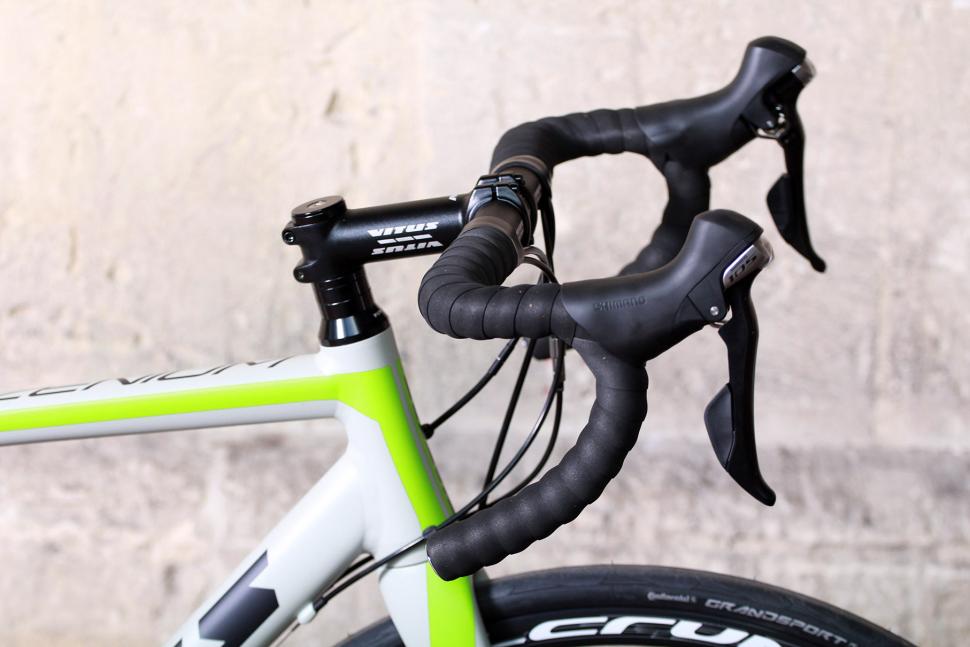 The head tube is of the tapered variety, taking a 1 1/8in bearing at the top and a large 1 1/2in bearing at the bottom, the idea of the larger diameter being to improve front-end stiffness. 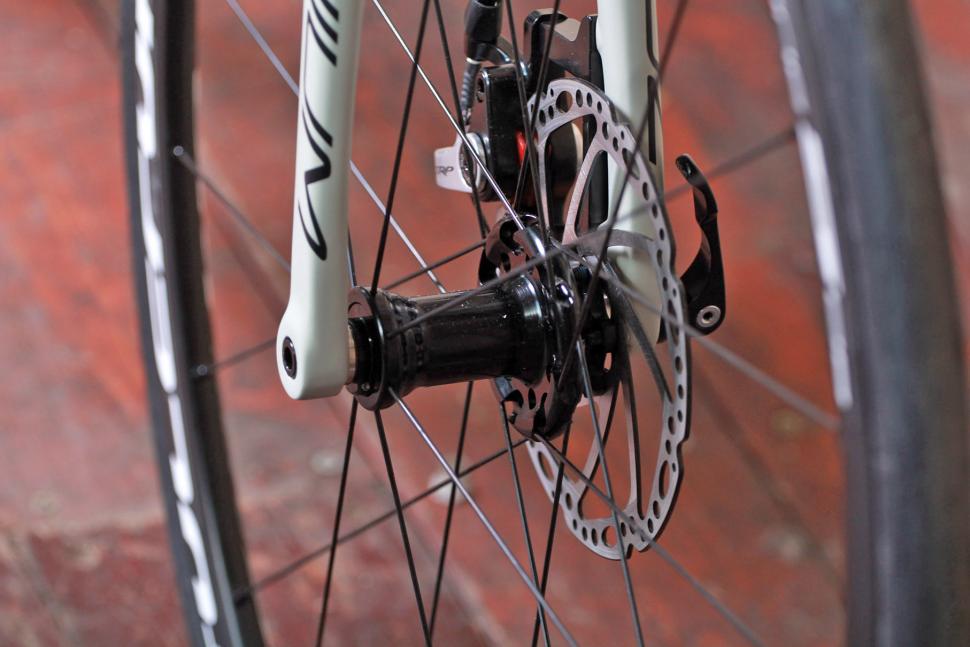 The fork that fits in there is made from T700 carbon-fibre, including the steerer. It takes a 100 x 15mm thru axle while the rear dropouts that accept a 135mm x 10mm quick release. We have the 54cm Vitus Zenium SL Disc in for review. This one comes with a 500mm seat tube – shorter than you might expect because the top tube slopes downwards along its length –  545mm effective top tube (measured horizontally rather than along the tube itself), and the head tube is 145mm. The head angle and the seat angle are each 73°. 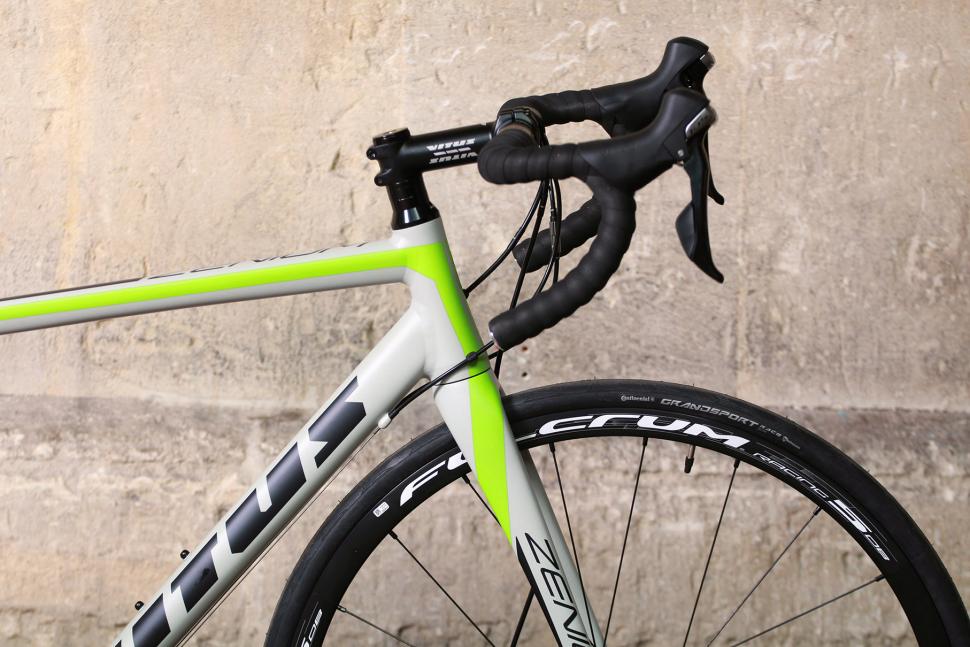 In other words, the Zenium has a geometry that’s slightly more relaxed – Vitus calls it an ‘endurance geometry’ – but the difference isn’t massive. Your riding position is going to be a little less aggressive here but this is still a performance-orientated setup, judging by the stats. We’ll see how that bears out as soon as Stu takes the bike out on the road. 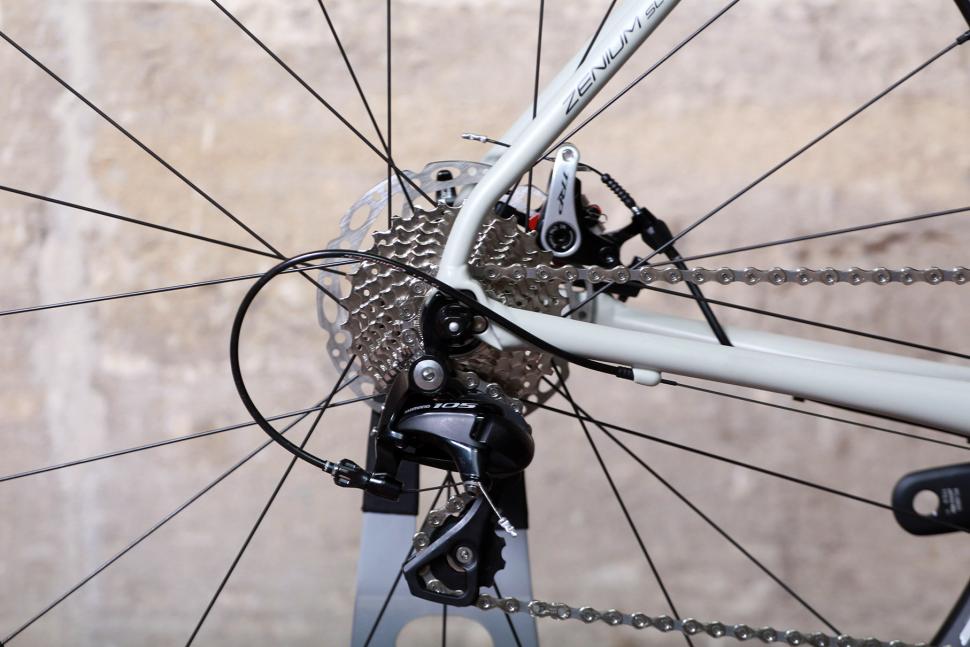 The Zenium SL Disc is built up with a Shimano 105 groupset. You’ll probably know that 105 is the Japanese giant’s third tier road group, sitting below Dura-Ace and Ultegra in the hierarchy but offering a performance that doesn’t lag too far behind. It’s Shimano’s most affordable 11-speed offering.

The shifters, chainset, both derailleurs, cassette and bottom bracket are all 105, while the chain is from KMC.

Check out our review of Shimano 105 here.

The brakes are TRP’s Spyres. These are an incredibly popular option, in our view the best mechanical (cable operated, as opposed to hydraulic) disc brakes out there. They benefit from a dual piston design, meaning that two pistons move equally against the rotor rather than just one, and adjustment is simple. 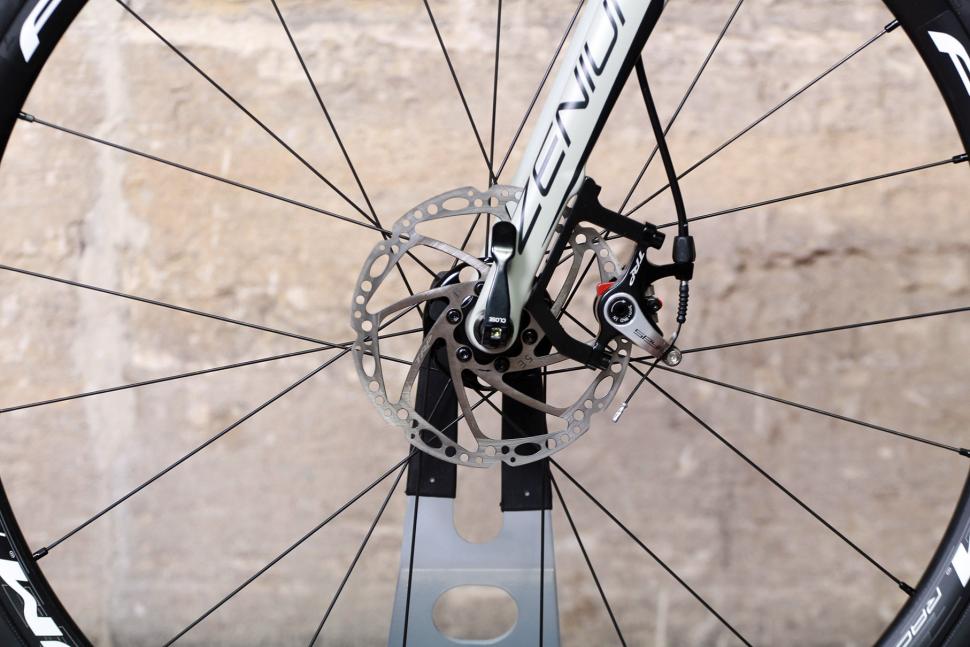 The Zenium SL Disc is equipped with Fulcrum Racing 5 Disc Brake wheels. We’ve reviewed the rim brake version of these and found them to be solid winter/training wheels, strong and not too heavy.

Read our review of Fulcrum Racing 5 wheels here, the rim brake rather than the disc brake variety. 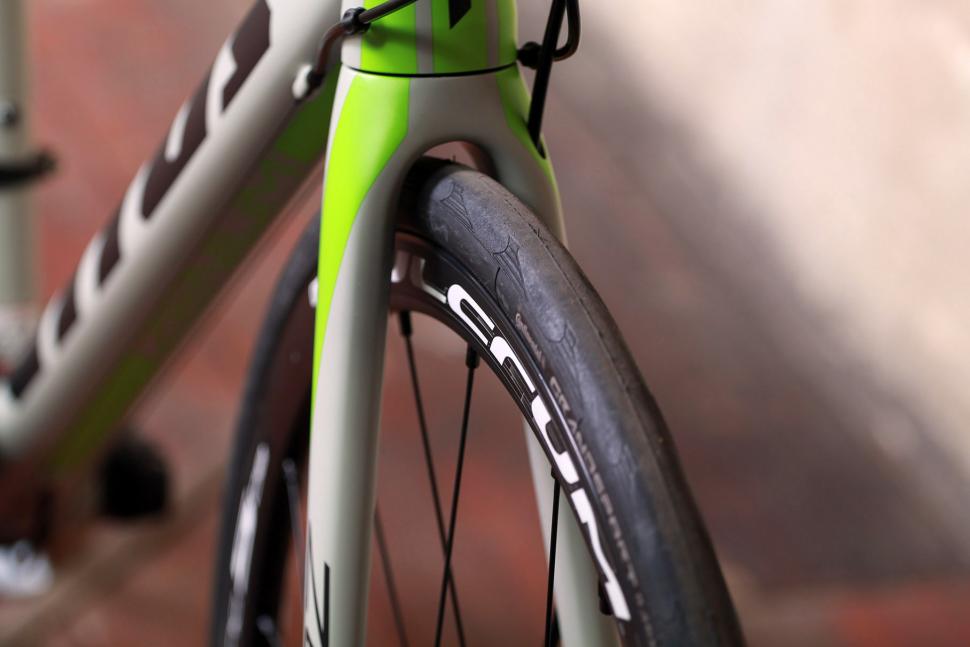 The tyres fitted are Continental Grand Sport Races in a 25mm width although you get enough clearance front and rear for tyres up to 28mm wide. Most of the other components are Vitus’s own, including the aluminium seatpost, stem, and compact handlebar.

The £1,299 Whyte Suffolk 105 that we reviewed here on road.cc last month is another disc-equipped aluminium alloy bike (6061 aluminium this time). Like the Vitus, it has a largely Shimano 105 spec but with Shimano BR-785 hydraulic brakes. On the down side, the Whyte Suffolk 105 is quite a bit heavier than the Zenium at 10.3kg (11.7lb).

Pinnacle’s Dolomite 5, which is describes as treading ”a fine-line between a more upright sportive bike and a performance bike" – is considerably cheaper at £1,000. At 9.7kg (21.4lb), it’s heavier than the Zenium SL Disc but it also has a largely Shimano 105 groupset and Shimano’s BR-785 hydraulic disc brakes.

Right, that’s yer lot for now. We’re not going to hand over the bike to Stu and await his report. Look out for it on road.cc soon.