Bikes and equipment from the women's Tour of Flanders race

I took to the start of the Tour of Flanders women's elite road race at the weekend and had a look around the bikes and equipment on display. I've already taken an in-depth look at Lizzie Armitstead's race winning bike, this is a roundup of most of the rest of the peloton.

Taking a closer look at the bikes, it's clear there weren't all that many radical changes. The cobbles of the Tour of Flanders course are not as brutal or demanding as those that feature in Paris-Roubaix, so many bikes were exactly the same as they would be for any other road race. There were a few modifications though. 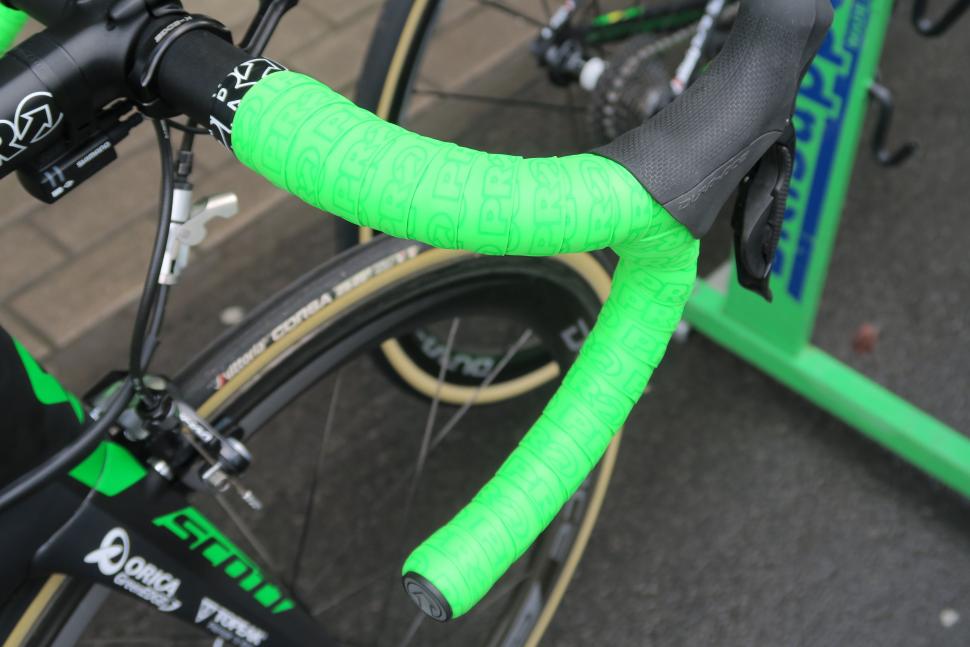 Such as double wrap bar tape, a common change. The idea is to layers of bar tape provides a bit of extra cushioning for the hands. Winner Lizzie Armitstead, however, just had single wrap tape. 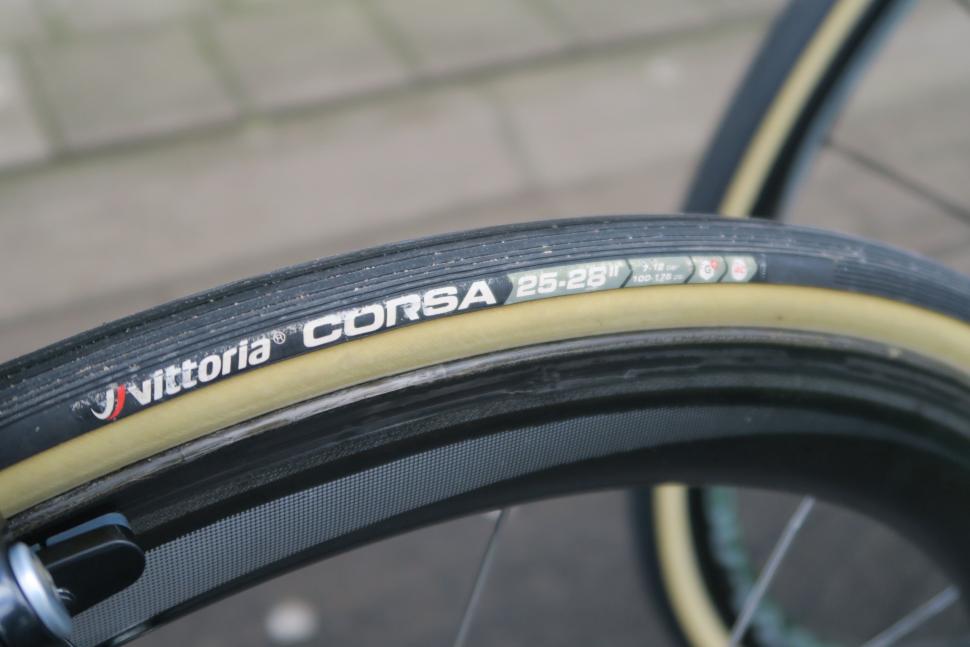 Wider tyres were common, but most only going up to 25mm tyres, which in most cases will be the same they race during the rest of the season. Most tyre brands were on show, including several teams on Vittoria's latest Graphene infused tyres, with 25 and 28mm spotted. 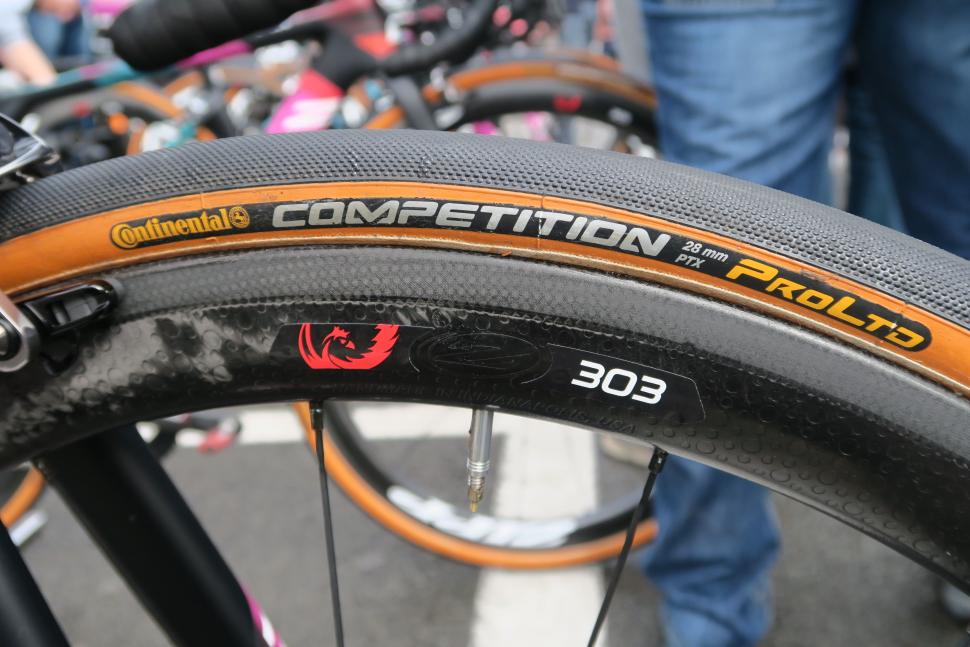 The Canyon-SRAM team was riding 28mm Continental Pro Ltd tubs. The wide tyres don't leave much clearance with the frame and fork. Luckily conditions were dry, it might have been a challenge in wet conditions. The team mechanic admitted they were a squeeze but said he wasn't concerned, and the lighter weight of the women racers was a factor in the decision. 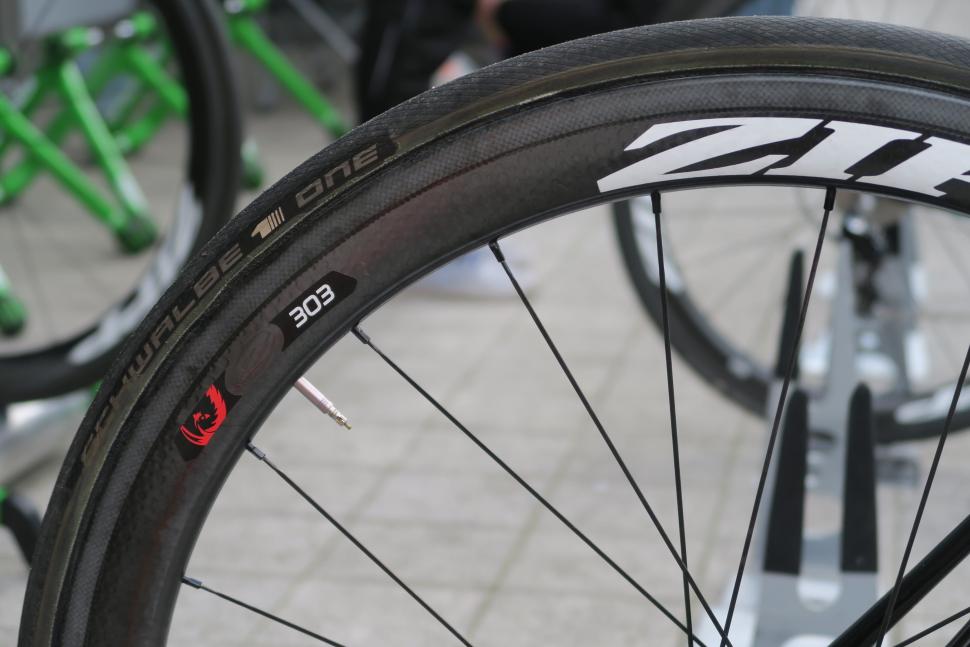 Carbon wheels are the dominant choice, with rim depths ranging from 30 to 50mm deep. 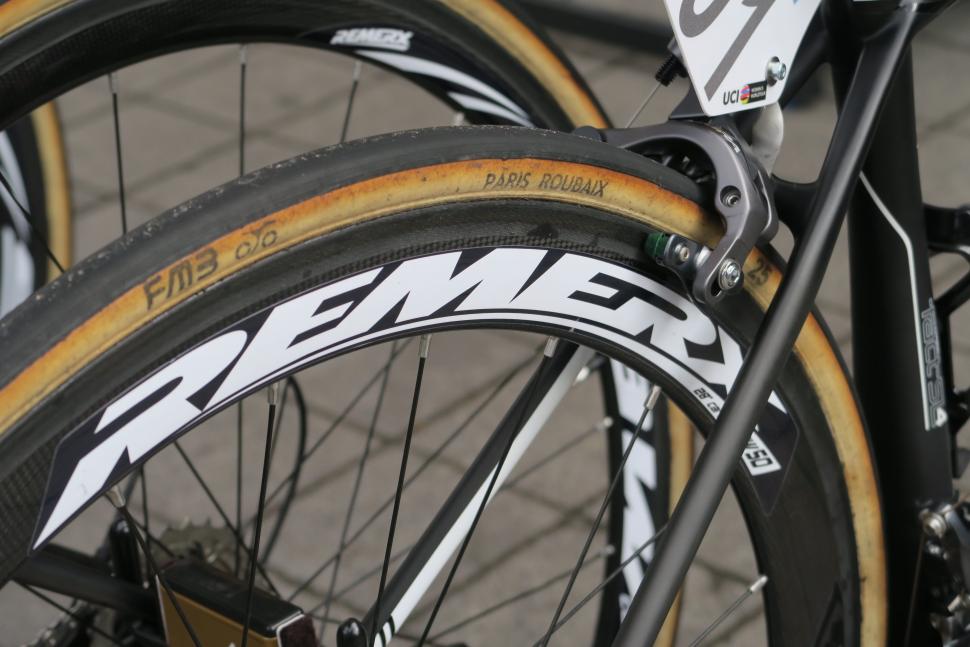 FMB and Veloflex weren't common sights like they will be in Paris-Roubaix, but we found a few bikes with them fitted. 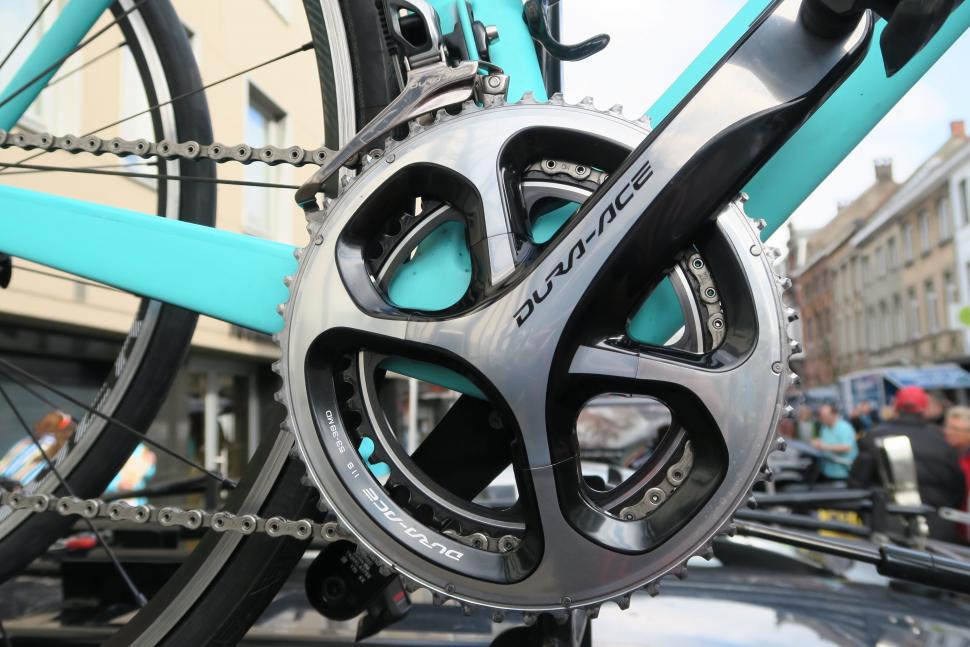 Gear ratios were the usual mix of 53/39t chainsets and 11-28t cassettes, but like I spotted on Peter Sagan and Fabian Cancellara's race bikes, a few bikes had smaller 36t inner chainrings. 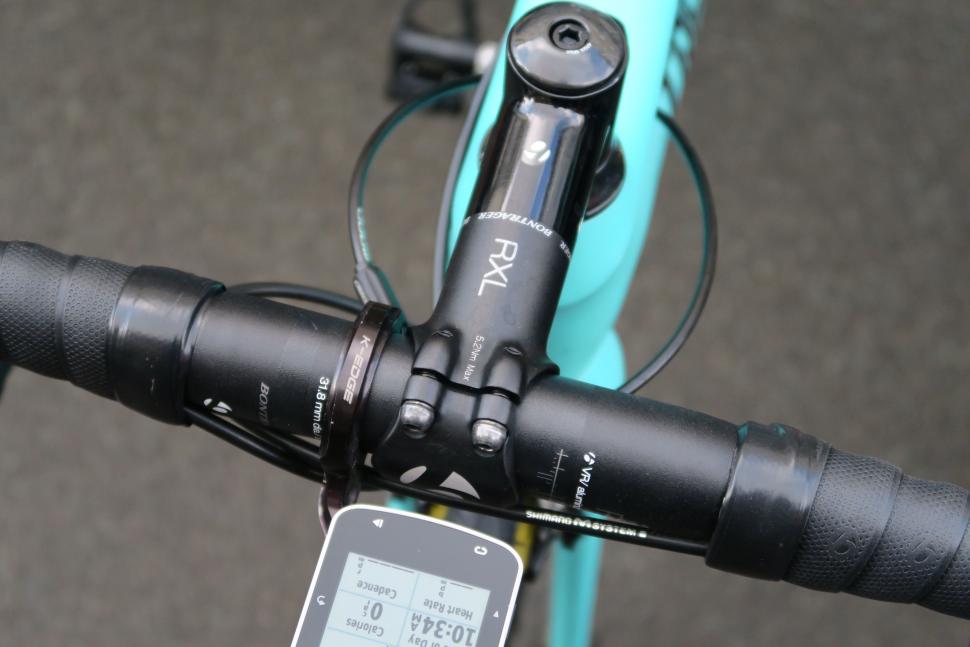 Aluminium handlebars and stems are common sights, with weight of less concern but durability and stiffness of more importance. 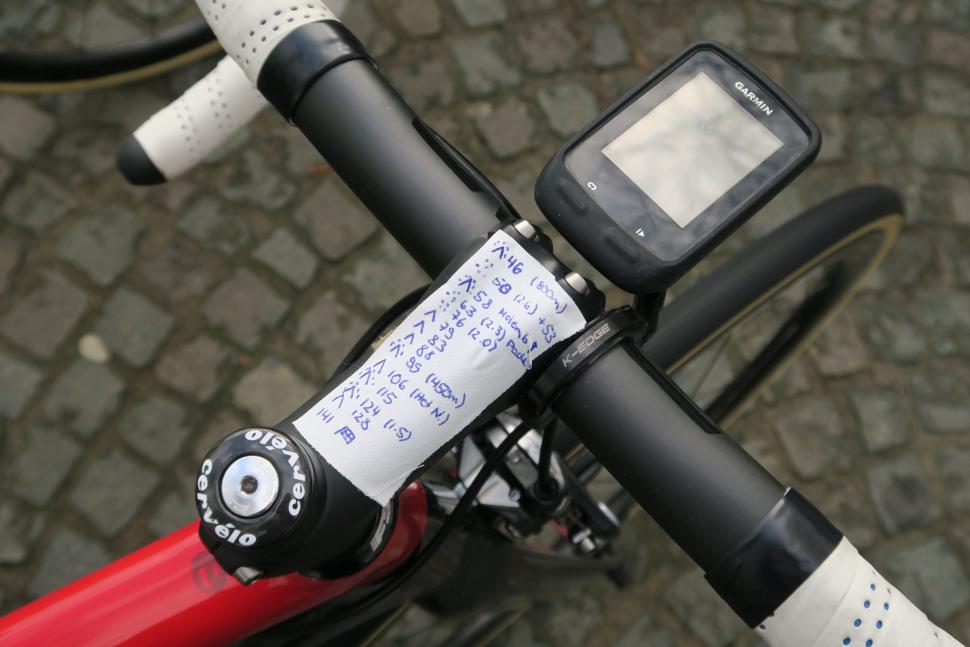 You have to look hard for the carbon handlebars and stems, but here's a Cervelo with Enve carbon bars and stem. 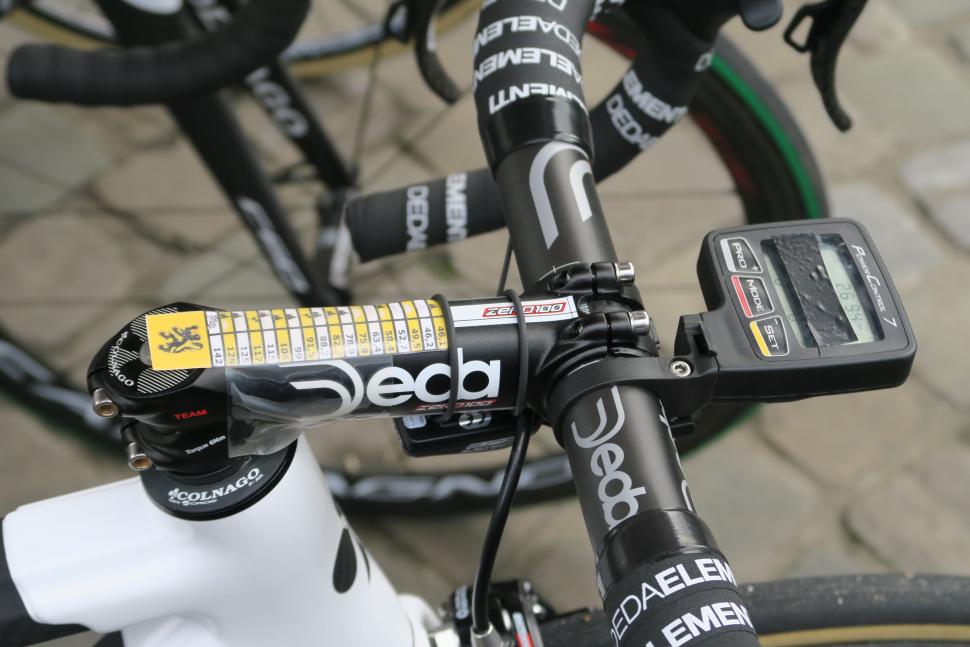 If you don't want to know your heart rate or power output, just slap a bit of electrical tape over the computer display. 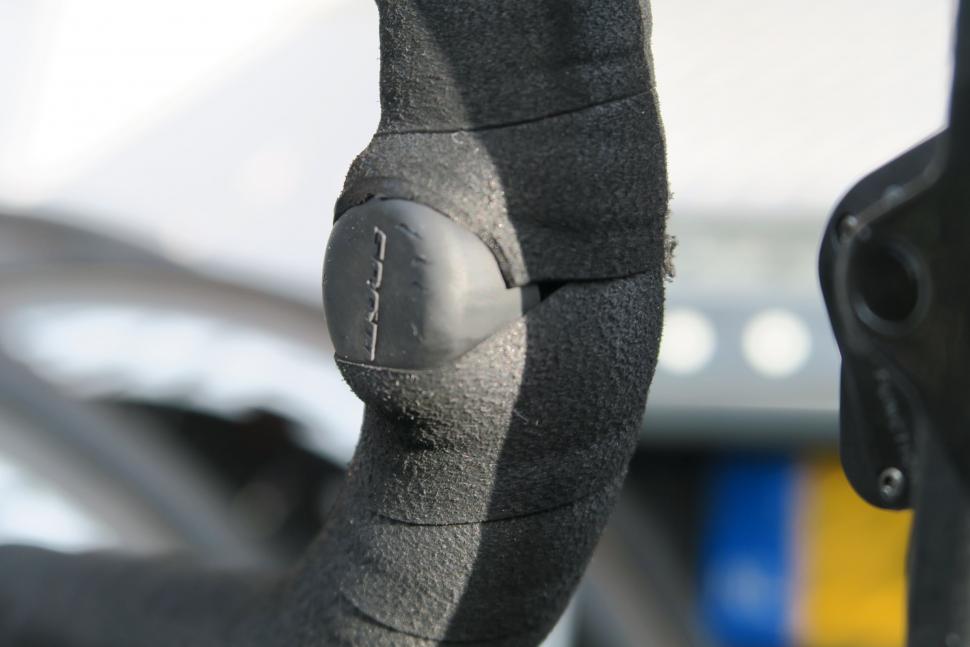 One handy benefit of an electronic groupset is the option to fit extra shifters to the handlebars in different positions. Lizzie Armitstead had SRAM's eTap Blips shifters fitted to the inside curve of the drops. That's a good position for changing gear when in the drops. 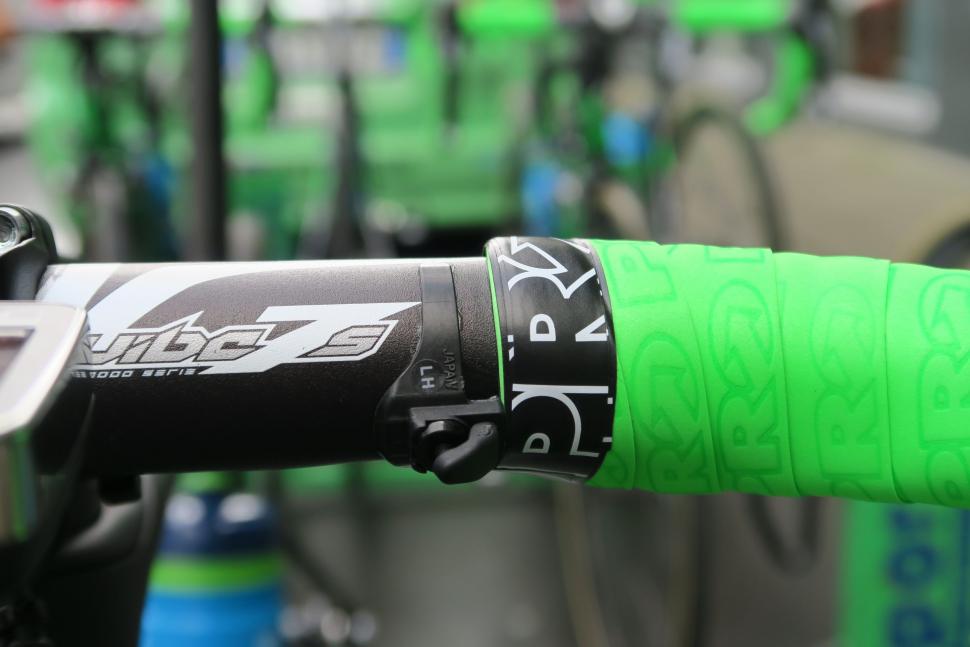 Most people ride the cobbles with their hands on the tops, and having extra shifters - so you don't have to remove your hand from the bar and reach over to the hoods - is a useful thing. These Scott Foil race bikes had heavily modified Shimano Di2 satellite shifters. Don't try this at home. 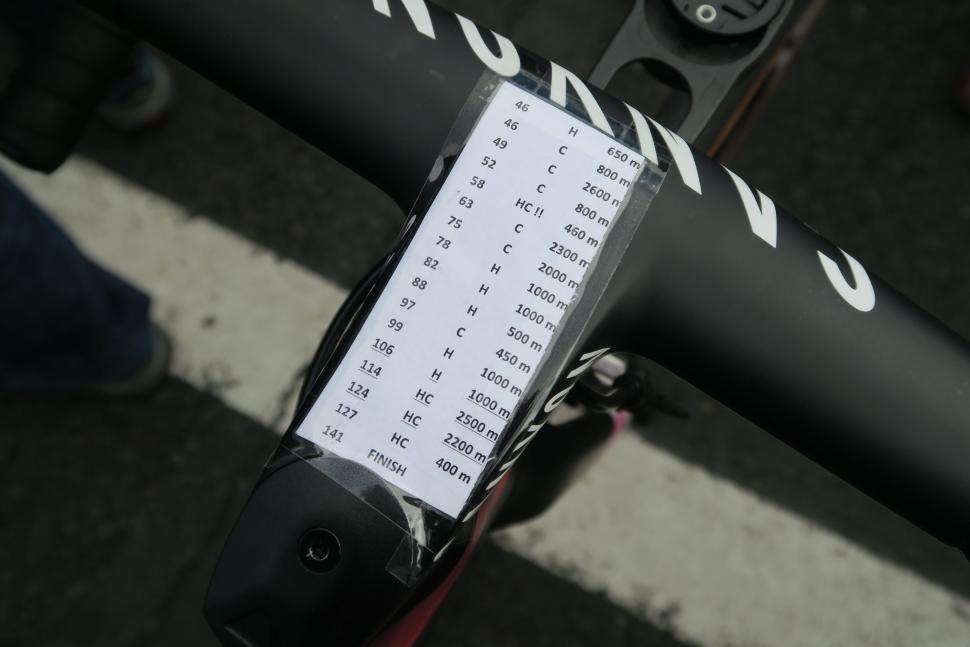 Course details - the location of key climbs, feed zones, where to attack - are written on a piece of paper and taped to the top tube or stem. 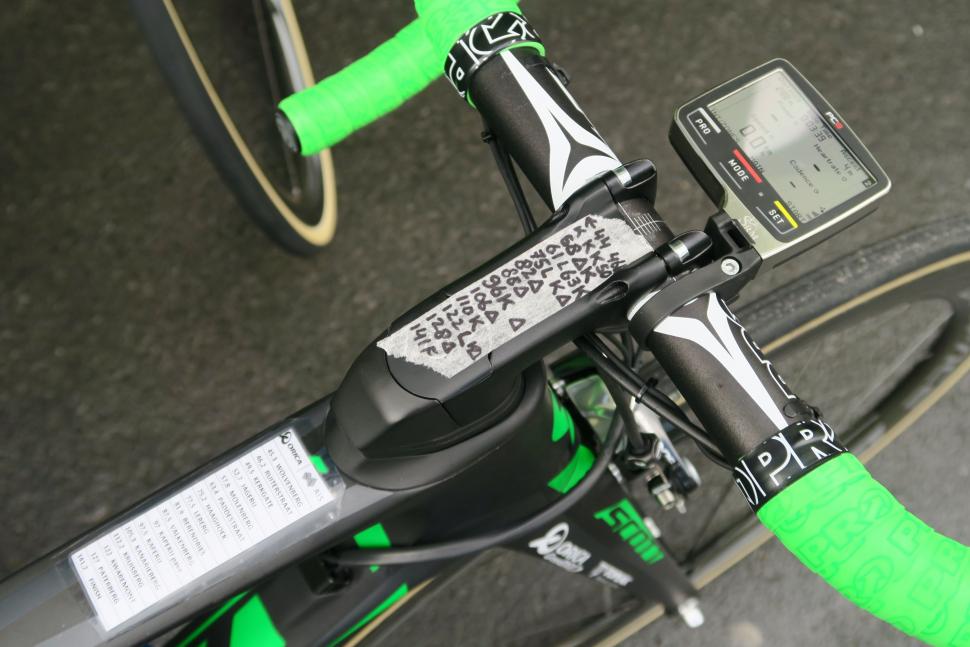 There are many different solutions, some neat but some a bit messy really.

And now some of the race bikes 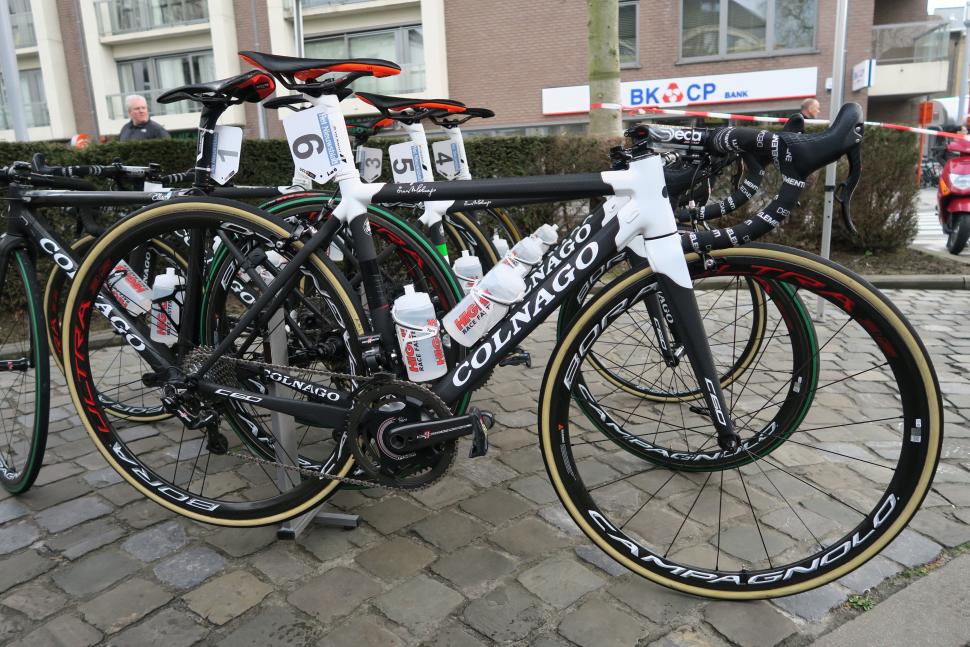 The Wiggle High5 Pro Cycling are sponsored by Colnago and the C60 is the bike of choice. 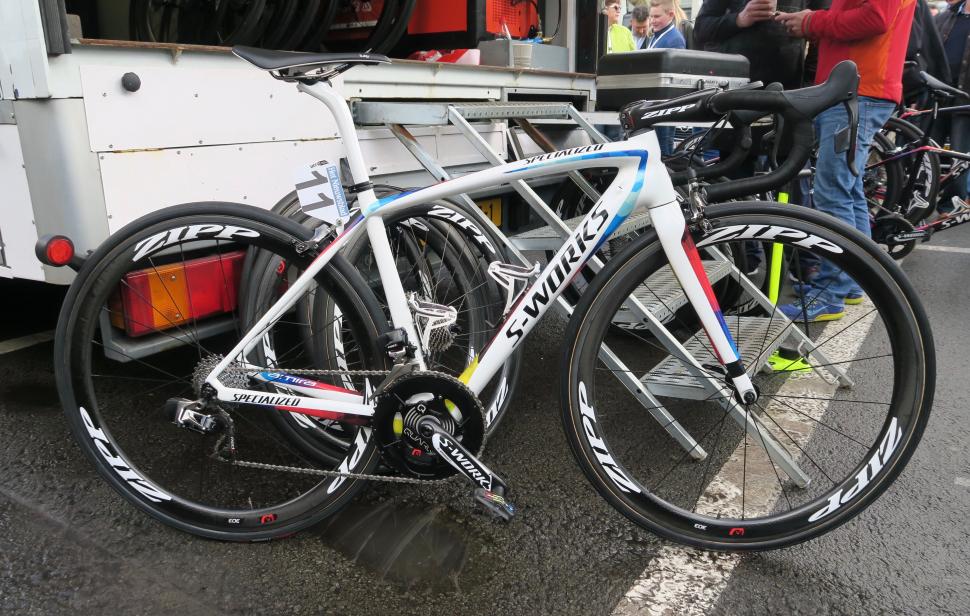 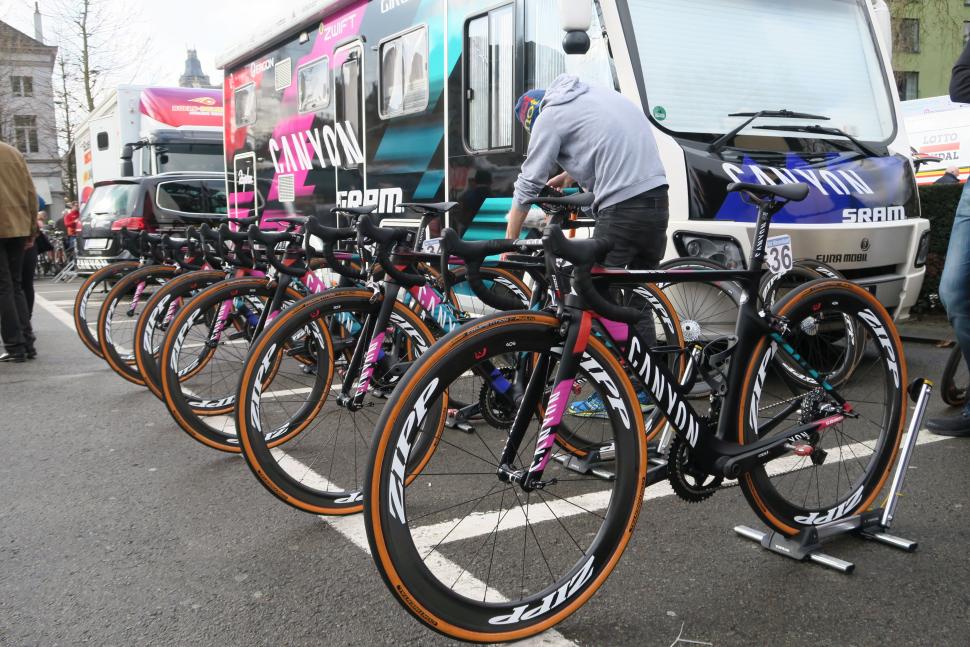 The Canyon-SRAM bikes, with the Aeroad frameset and SRAM eTap groupsets and Zipp 303/404 wheels do look really good. 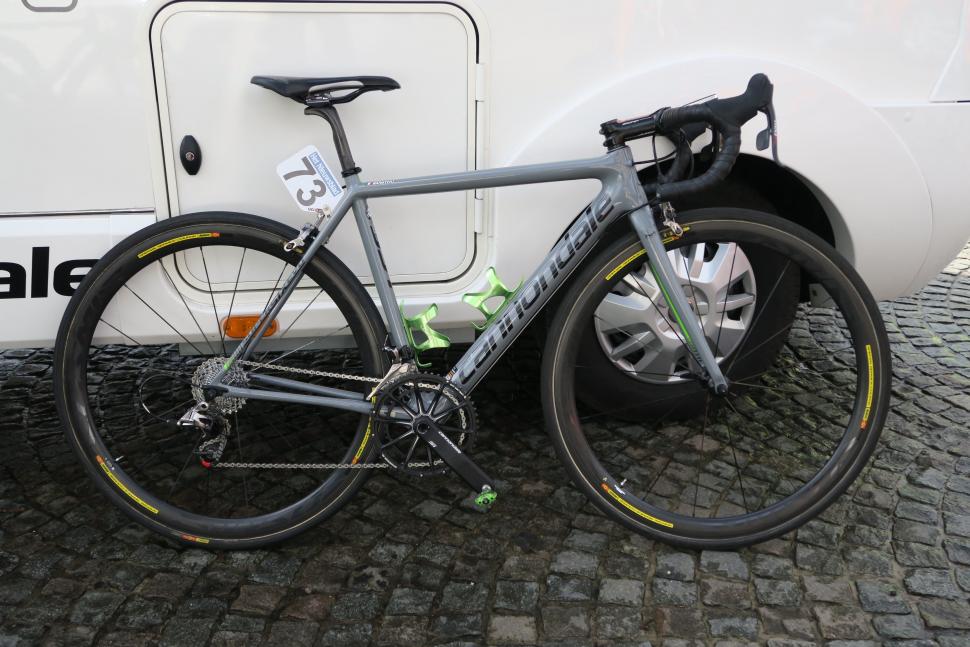 US team Cylance Pro Cycling is sponsored by Cannondale and races the SuperSix Evo (and not the Synapse, a bike designed for the cobbles). Shimano Dura-Ace mechanical is a rare sight into the men's professional peloton. 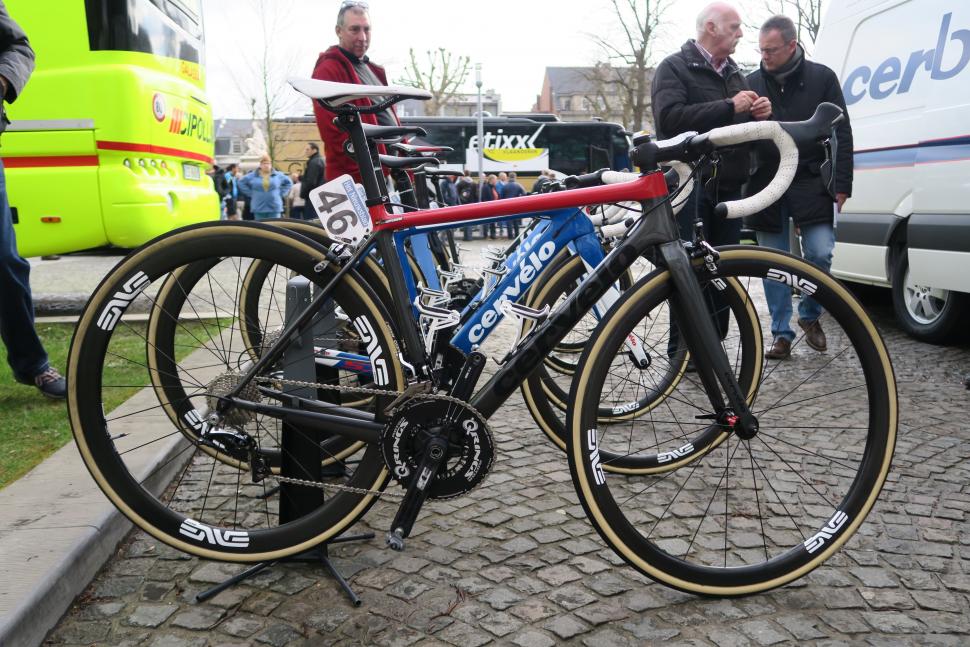 Cervelo Bigla Pro Cycling Team had a range of Cervelo models, presumably each rider choosing the bike they feel suits their requirements best. Another bike fitted with Dura-Ace mechanical. 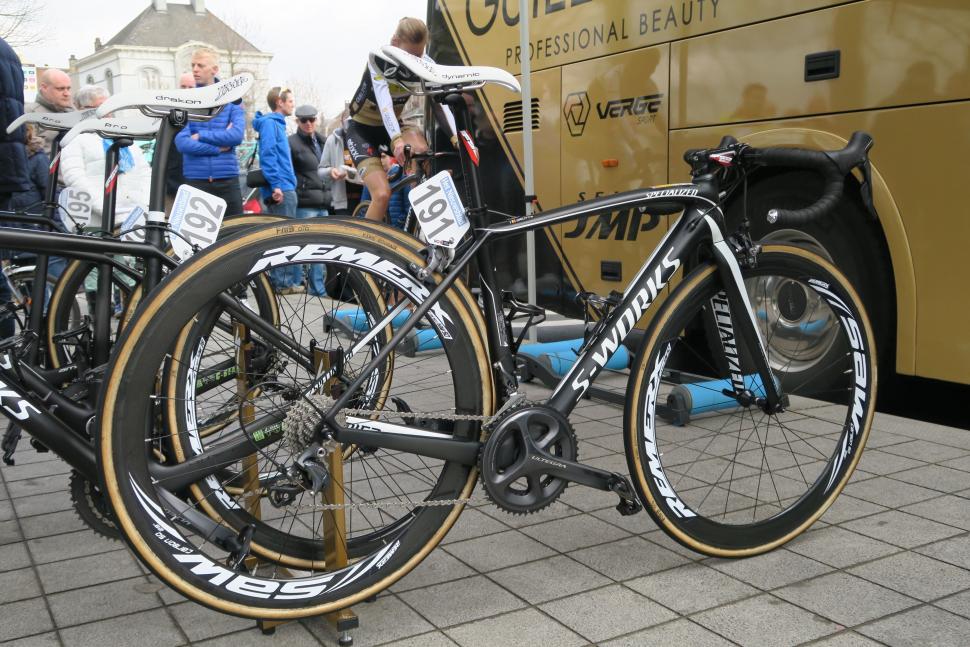 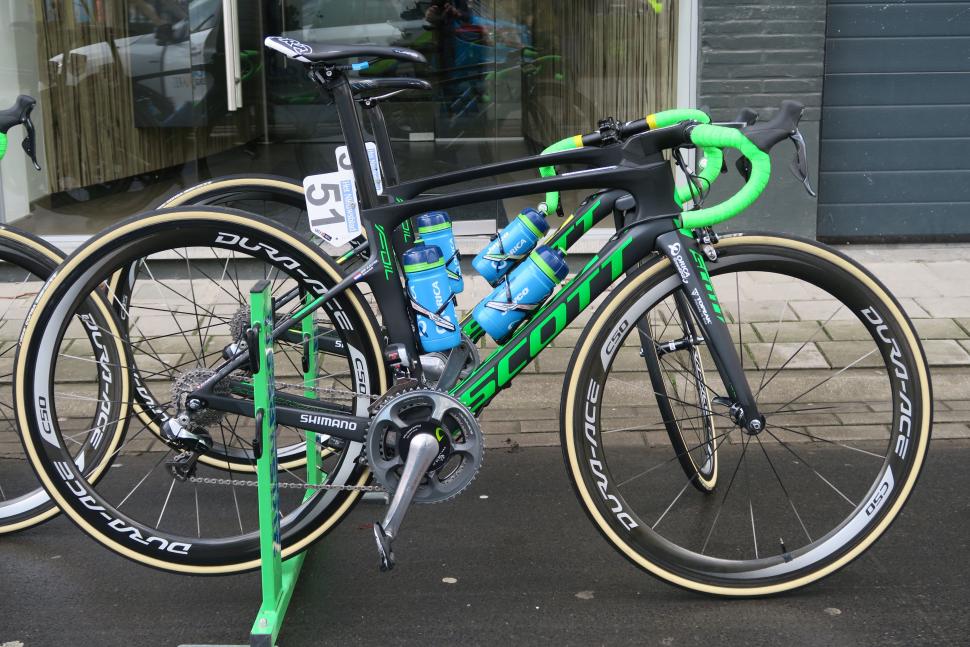 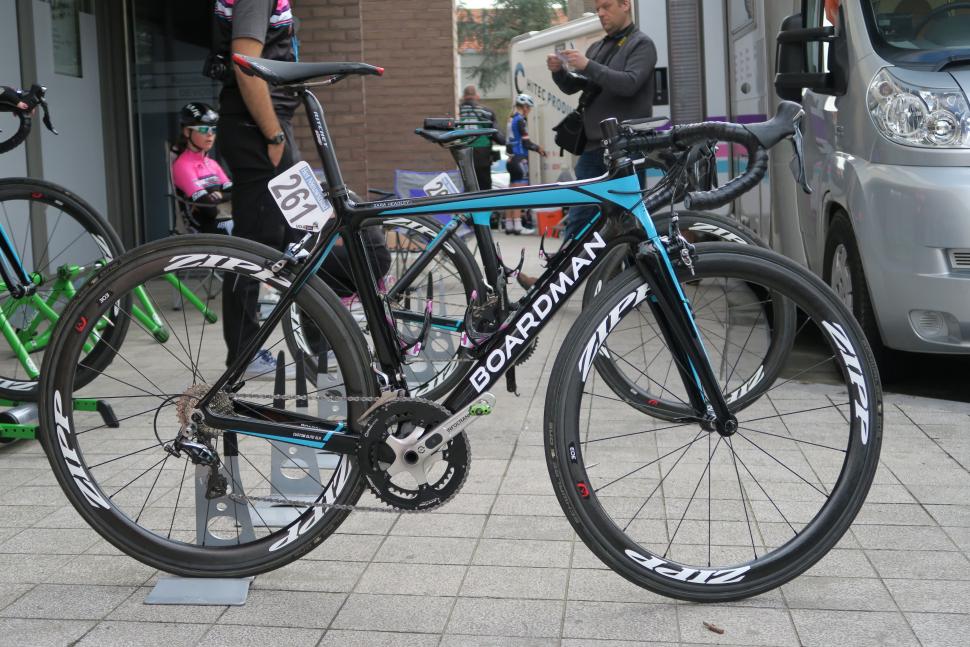 Good to see Boardman being used by a race team, in this case it's the Podium Ambition Pro Cycling P/B Club La Santa squad. Bikes are equipped with Dura-Ace mechanical groupsets and Infocrank power meters with Zipp wheels. 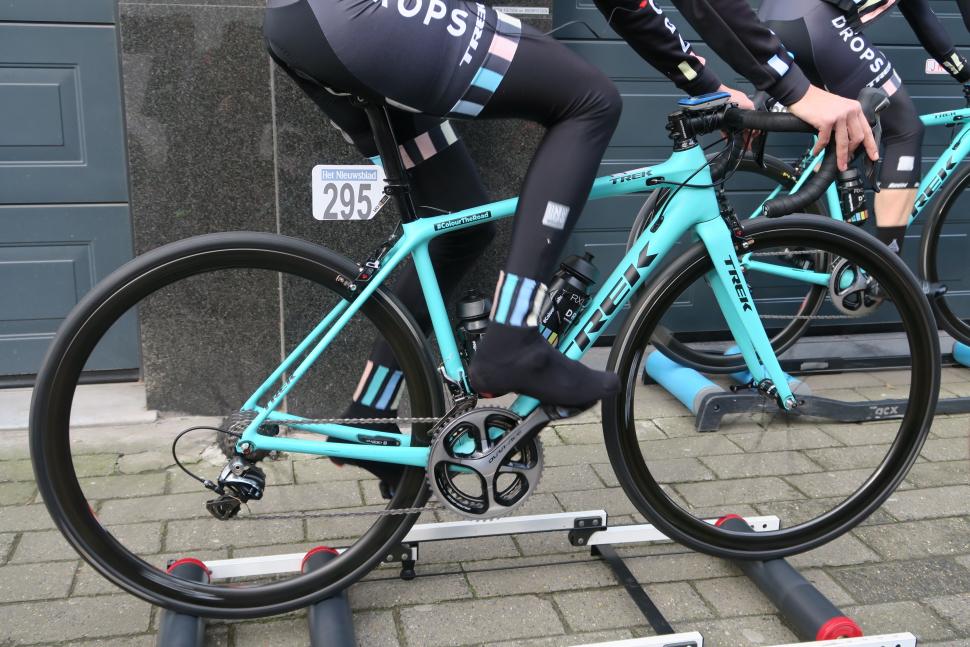 The British Drops team have, in my opinion, the nicest finished bikes in the women's elite peloton. Once again, we find Dura-Ace mechanical groupsets rather than Di2 - I wonder if this is a financial or preference decision? 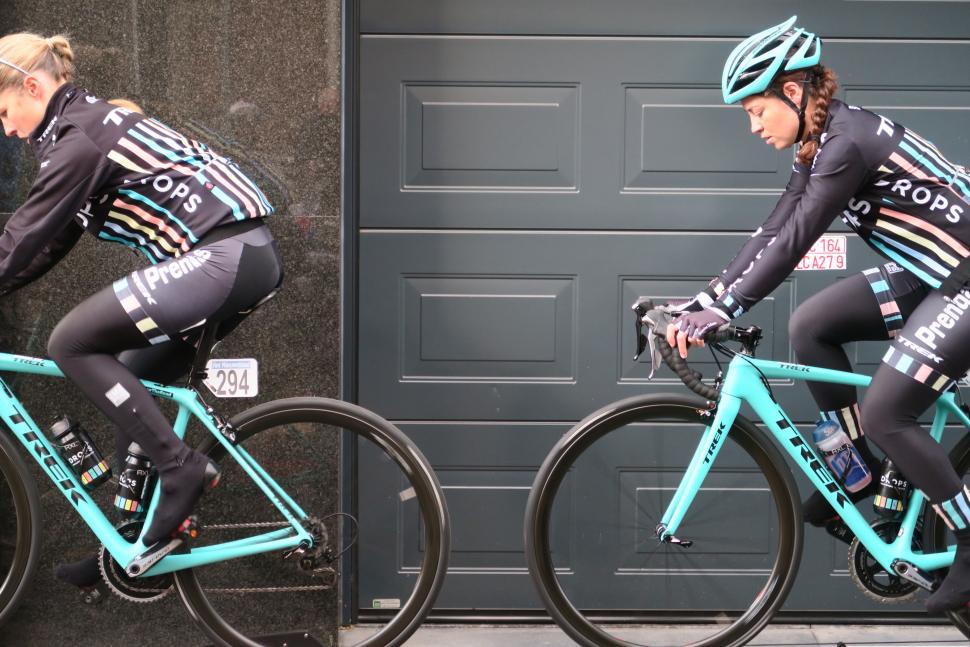 The stripy kit goes well with the bikes. Bontrager, owned by Trek, supplies the wheels, with Continental providing tyres. 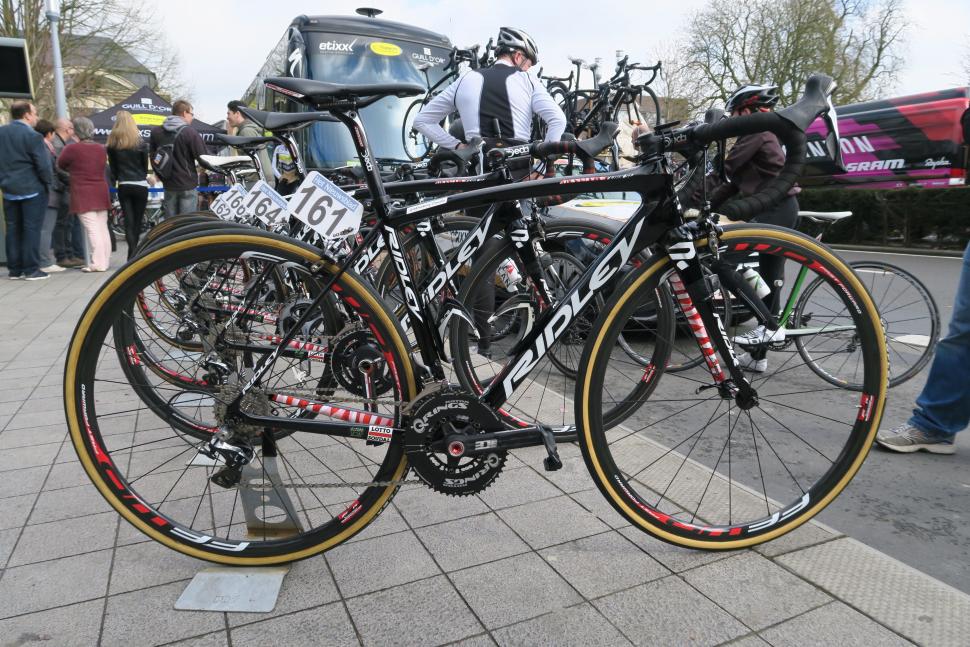