A solution looking for a problem, or does this latest Kickstarter product have potential
by David Arthur @davearthur

Okay, first things first, the AIM (Adjustment in Motion) adjustable length stem from Spanish firm 3FStech is being promoted as a mountain bike product, but watching the video we couldn’t help feeling that it could be useful for cyclocross, gravel and adventure bikes.

A short stem so you’ve got a bit more control and less weight over the front wheel for riding tricky steep trails, and a longer stem for bashing along the road when you want to stretch out and get comfortable. With bikes increasingly being designed to excel on and off the road, could an adjustable length stem be a viable product or is it simply too early for April Fools' Jokes?

We can’t ever recall seeing an adjustable length stem, correct us if we’re wrong, through adjustable height stems are quite common on city and urban bikes. Those require tools to adjust, none has a remote lever for on-the-fly adjustments like the AIM.

- Suspension stems are back!

The AIM is three-position adjustable stem, and can be adjusted while you’re in motion, using a handlebar mounted lever. It’s a 120mm stem with a -20-degree angle in its most stretched out position, shortening to 95mm and -7 degrees in the middle, and 55mm and +6 degrees at its shortest.

The company makes some bold claims for the advantages of the stem over conventional fixed stems. 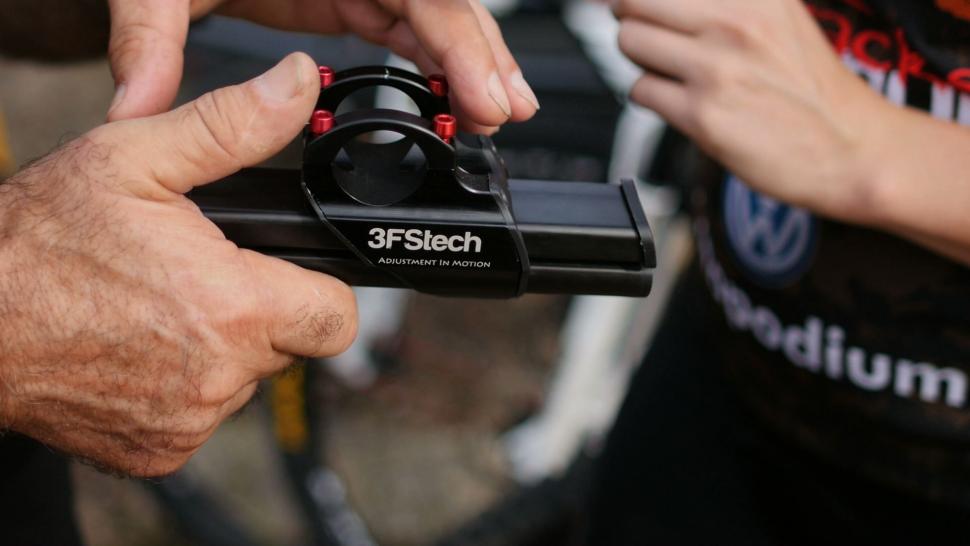 “The 3FStech adjustable stem will be an evolution in mountain bike racing. It will provide better performance and more versatility because the bike can be adjusted as the rider’s environment changes,” states the company.

The stem isn’t the prettiest thing in the world, and nor is it light - it’s claimed weight is 350g, plus an extra 50g for the remote lever. A lightweight 120mm stem is more like 160g, so it’s a considerable weight penalty. We'd also be concerned about the stiffness and durability as well -the last thing you want is your handlebars sliding forward unexpectedly on a steep descent.

The company hopes to raise €25,000 of funding through the Kickstarter campaign that launched this week. If the Kickstarter campaign is successful, it aims to go into production in December with a first manufacturing run of 2,000 units. It’s not cheap, though, it’ll cost you €175 to get your hands on an early bird stem, but they do throw in a free t-shirt. It’s only compatible with 1 1/8in steerer tubes and 31.8mm handlebars.

Check it out now at https://www.kickstarter.com/projects/3fstech/adjustable-mountain-bike-stem