The Magicshine ALLTY 2000 is a good-quality light with a wide range of power settings and some different beam patterns too. You get reliable run time data displayed on a screen and a solid mount into the bargain, but neither the beam pattern nor the removable Lithium-ion battery are without their issues.

As LEDs and batteries get more efficient, torch-style lights are increasingly dominating even at the high-lumen end of the market, and the ALLTY 2000 is one such beast. It's a compact torch design with a metal and plastic body, a single button and an LCD screen. 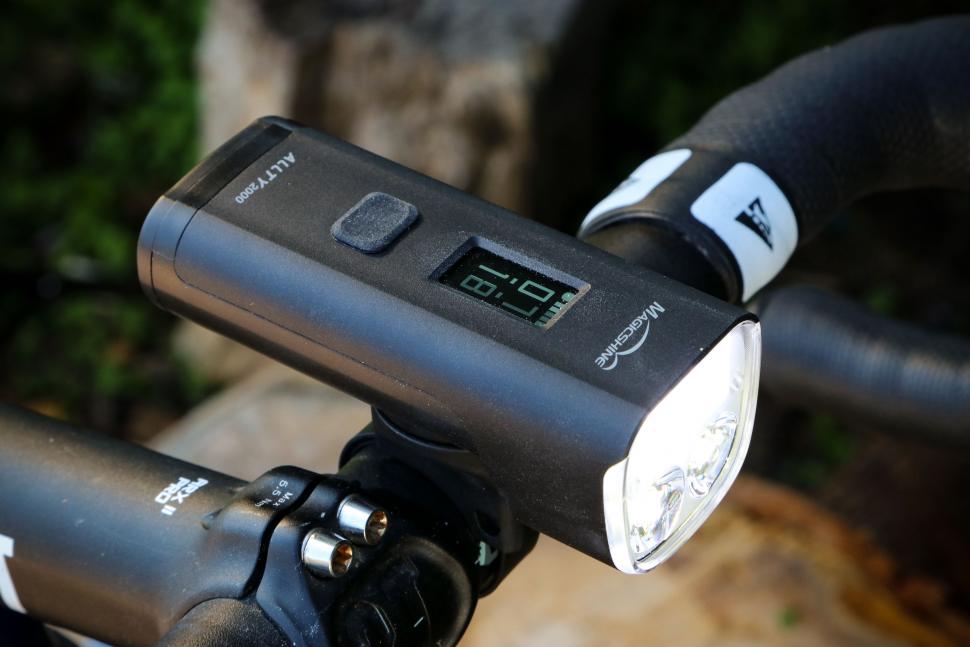 It feels well made, and comes with an excellent mount. It uses the Garmin quarter-turn standard, so the light fits on an out-front mount. In the box you get a bar mount that uses a band tightened by a 3mm allen bolt. Mounts vary in effectiveness, and although the Magicshine one is a faff first time around it's super-secure – something that can't always be said of the rubber straps common even on high-power lights. 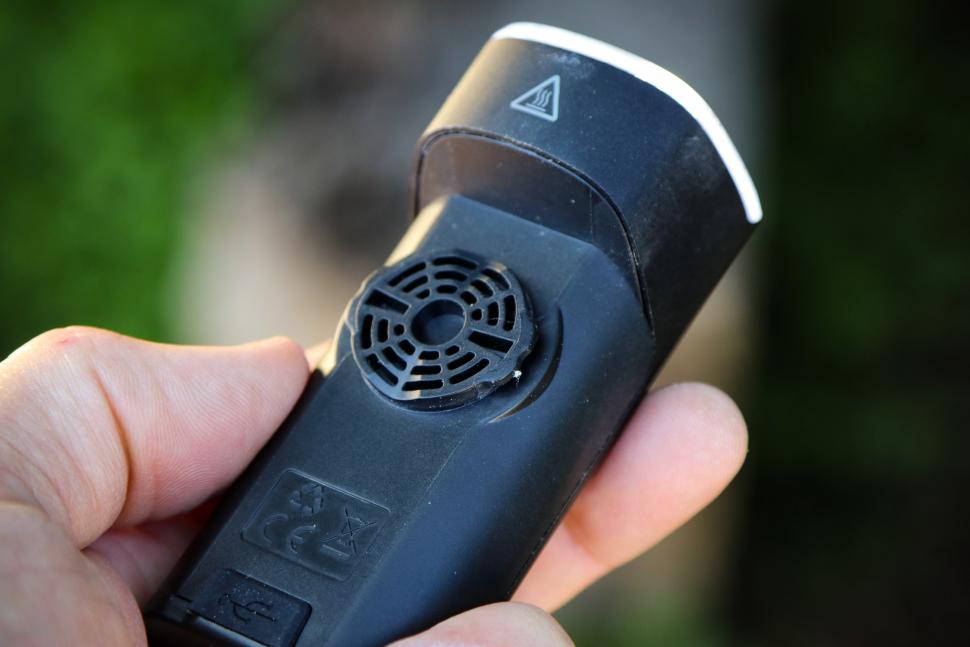 Waterproofing is good: the USB port is well-protected on the underside of the light, and the rest of the unit is well-sealed. It's been unusually dry round here during testing, but the ALLTY 2000 survived 15 minutes in the shower with no obvious water ingress anywhere. 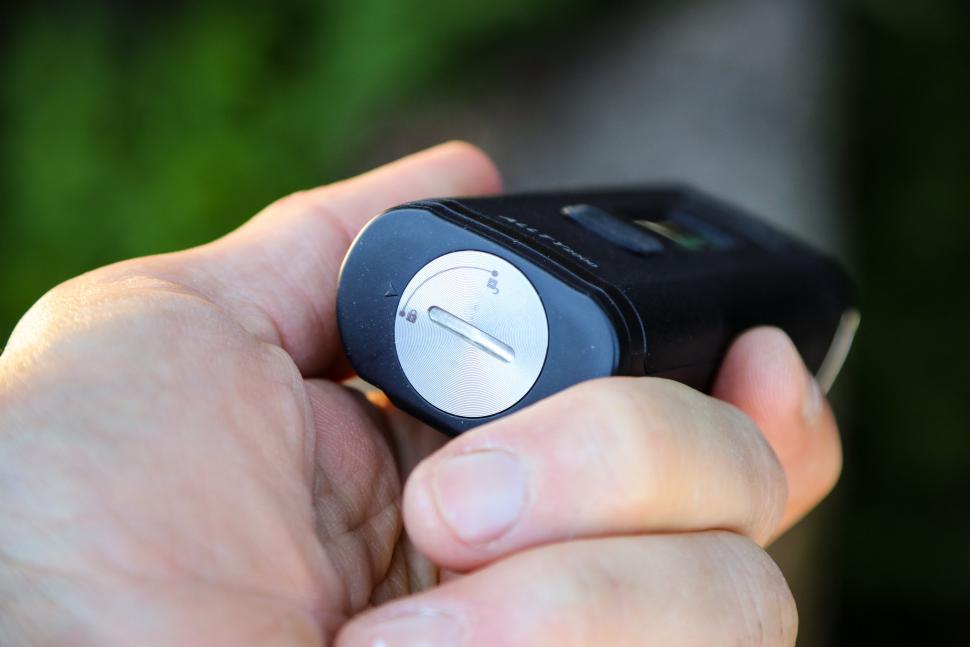 The ALLTY 2000 combines three light sources. Two CREE XM-L2 LEDs pump out most of the lumens, while the daylight running light (DRL) above is a chip-on-board LED strip. You can run either LED alongside the strip, or both together, or just the DRL strip on its own.

The two main LEDs have a different throw: one has a dimpled lens cover for a 25° spread, and the other a clear lens for a narrower, 18° spread. Here's the flood... 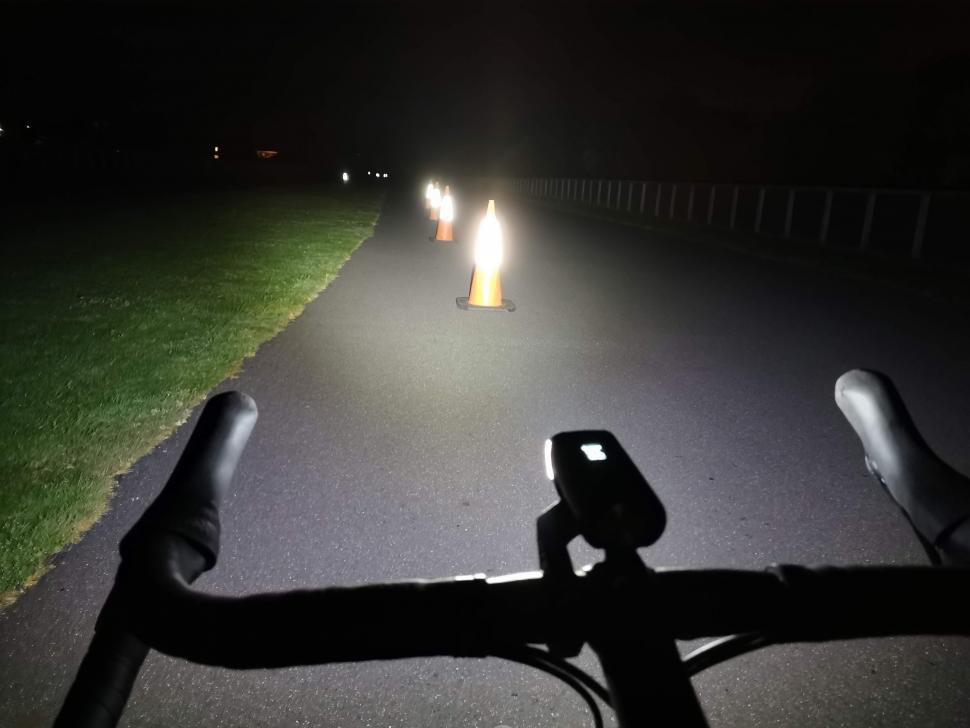 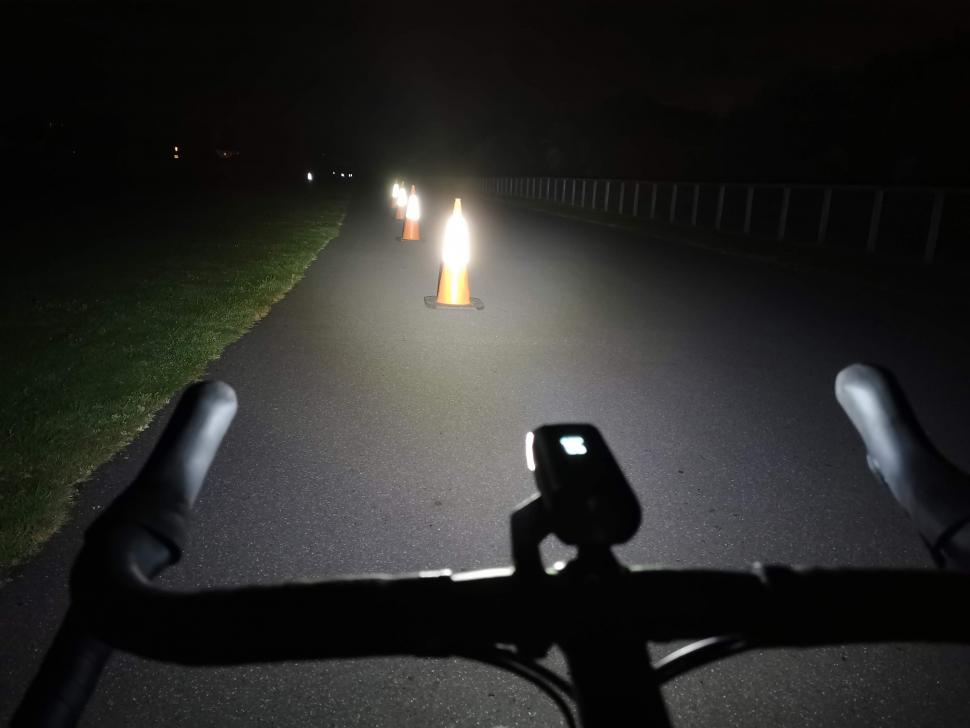 As you can see they are different, but not to the extent found on some other lights, for example the Ravemen PR1600  that's one of our current favourites. That light has a flattened beam pattern on one lens to reduce glare for oncoming traffic; both of the Magicshine's beams are round, so you end up throwing a fair bit of your light at the sky. 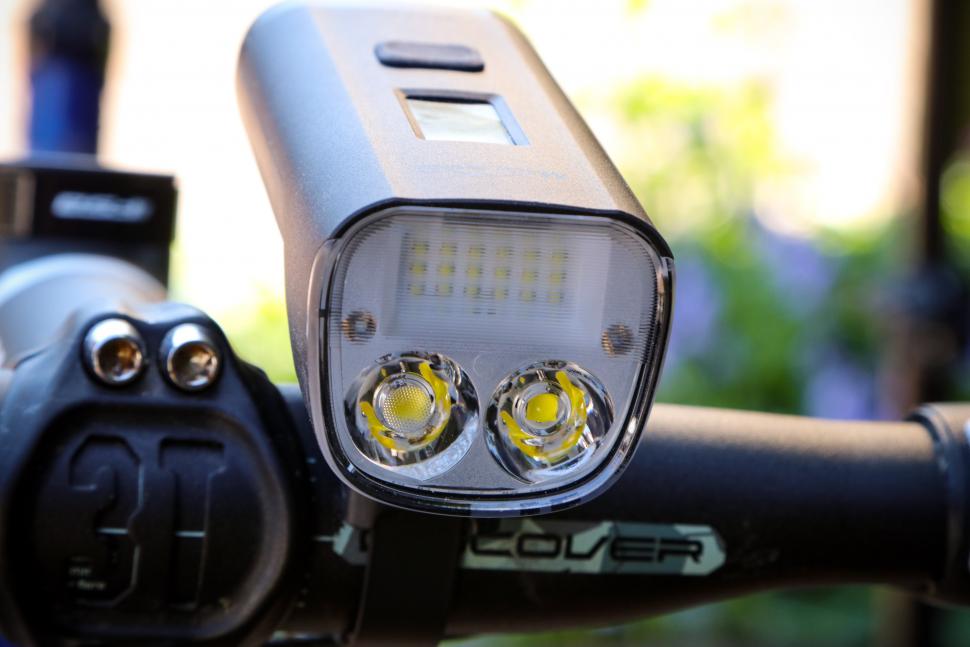 It's still very bright though: bright enough for riding at any speed on dark lanes. The quality of the beam is good and the DRL strip gives a bit of close illumination to augment the longer throw of the CREE LEDs. Magicshine says it's 'ideal for both road and mountain,' but in reality it's probably a better off-road beam than a road one.

The design of the lens gives a bit of side illumination as well so you can see what your hands are doing, and other road users can see you at a junction. 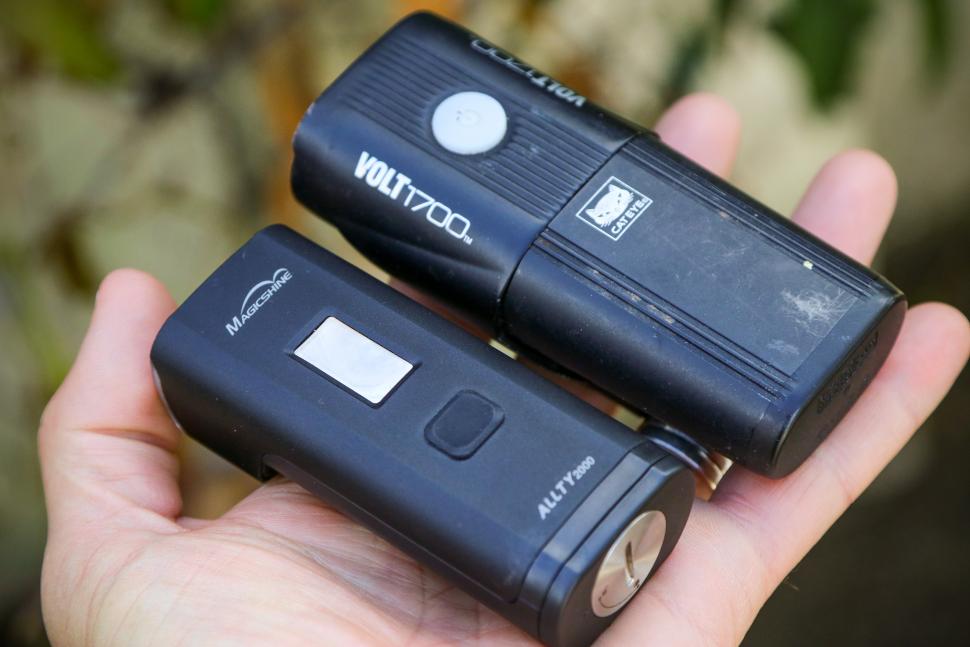 The ALLTY 2000 isn't an especially big light, and capacity is 3,500mAh from the removable 7.2v battery pack. Compare that to the larger Cateye Volt 1700 which packs in 6,8000mAh for nearly twice the runtime. On full beam the Magicshine has enough juice to run for just over an hour; you can extend that by carrying a spare, although the battery on its own isn't currently available on the UK distributor's website.

It's worth noting that, although both the manufacturer's site and the box say the capacity is 7000mAh, it isn't – the battery label is correct. 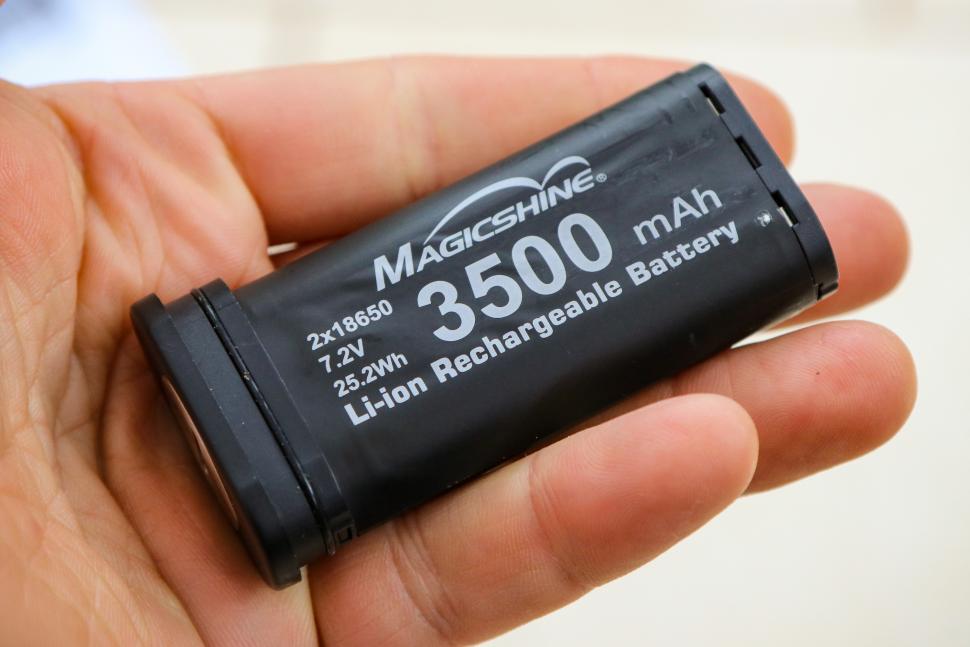 Work your way down through the modes and your run times increase, of course, all the way to 14.5 hours for just the 55-lumen DRL strip. If you're aiming to ride all night you'll be stretching the ALLTY 2000's limits on one charge – the DRL strip doesn't really give  enough light to ride by.

A single main beam on the lowest setting gives you about eight hours, which will see you through to dawn, but that's only 100 lumens of light which – on the spot beam – is just about enough for cautious night riding. The second-lowest setting on one LED – 250 lumens – is better for general night use, and that gives around five and a half hours. 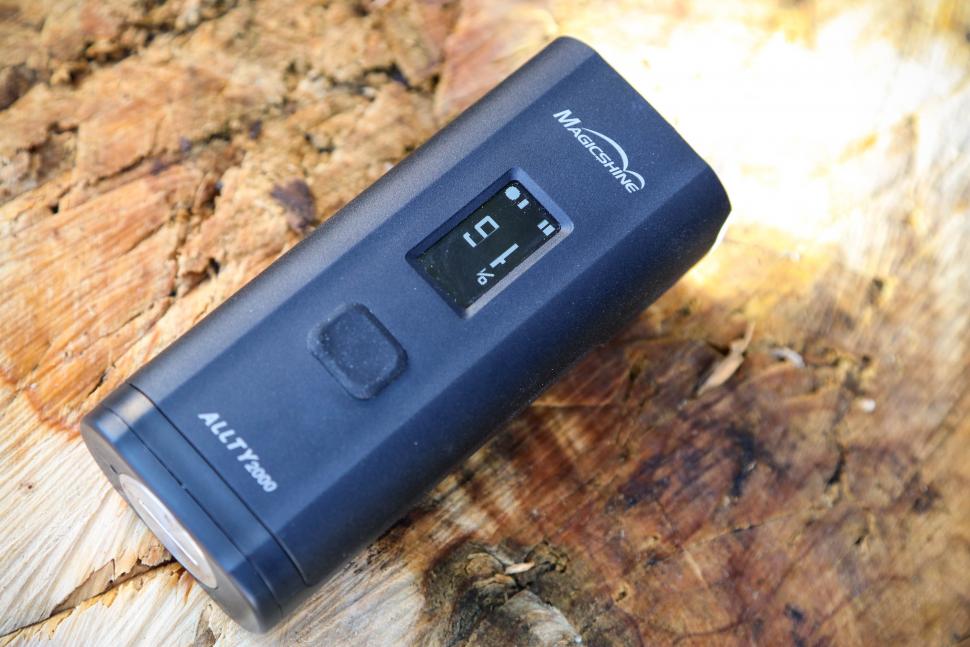 The ALLTY 2000's screen is simple and functional: it shows battery charge as a percentage when you switch modes, and then switches to run time after a few seconds. I found the run time estimations reasonably accurate, and it's useful on a longer ride to know what's left in the tank over and above a simple green-amber-red button. Current mode is indicated by an icon at the top, although the power setting isn't, which is a shame.

The brighter modes are only really necessary when you're getting some speed on. A push of the button cycles through the brightness modes of whatever setting you're in, and a double click changes the setting in this sequence: Spot > Flood > Twin beam > Flashing > DRL.

> 13 of the best cycling reflectives — get seen after dark

The modes cycle dimmest to brightest, which is what you want (fewer presses for more light when you need it), but you need to be a bit careful when you're changing up: tap the button too quickly and you'll switch modes instead, and from twin beam that dumps you into flashing – exactly what you don't want going into a fast descent in the dark. It's quite a lot of clicks to get back to twin beam from there, too.

It's not the worst interface I've used on a light, but neither is it the most intuitive; given the sheer volume of modes it's a light that would benefit from some kind of editing functionality, to let you choose the ones you're going to use.

> Bike lights: 10 insider facts you need to know before you buy

At £129.99 the ALLTY 2000 is going head-to-head with a road.cc favourite, the Ravemen PR1600. That light gets a more road-oriented beam pattern, longer run times and a wireless remote; it comes out on top in a straight fight. The Magicshine is a decent light, and a bit more compact... plus I've already seen it discounted online to around £80, and at that sort of price it's good value. However, although the ALLTY 2000 is certainly bright enough, the beam pattern isn't particularly well-suited to road riding and, at full RRP, it feels overpriced for the spec.

Magicshine's 2nd bike headlight with built in DRL (Daytime Running Light.) Ideal for both road and mountain with its highly adjustable brightness and flash modes at 200 - 2000 lumens.

Two front CREE XM-L2 V60 LEDs have slightly different roles, one has grated lens with a 25 degree beam spread while the other clear lens has an angle of 18 degrees. Each capable of 1000 lumens of actual output. Powered by 2x 18650 3500mAh cells into a Magicshine proprietary cartridge style battery pack. It is enough to power full beams, full brightness for up to one hour, 2 hours on single LED at 100%, and up to 14.5 hours on just the DRL.

*Dural beam angle (near and far)

It's straightforward enough, but not the most intuitive.

One of the best mounts I've used on a bike light.

It's okay. One hour on full beam isn't all that useful, but there are plenty of other modes.

It's a decent light; maybe more suited to off-road use.

Well constructed with an excellent mount.

Doesn't really stack up against its direct competitors at full RRP.

Pretty well: it's bright, has a secure mount and is fairly easy to use.

The mount is a highlight, the beam's decent, and the removable battery means you can extend the life.

The two beams are too similar and neither is particularly road-focused.

It's fairly expensive for what it is. The Ravemen PR1600 (same RRP) is just as bright and runs for longer, and also includes a wireless remote.

Did you enjoy using the light? It's decent rather than great.

Would you consider buying the light? Not at full RRP.

Would you recommend the light to a friend? Not over the Ravemen PR1600.

It's a decent light, this: well-made with a powerful beam. Magicshine needs to work on a more road-oriented beam, or at least use the fact it has two LEDs to make one better for road use. At £129.99 it's easily eclipsed by the Ravemen PR1600, which is still the light to beat at this price.