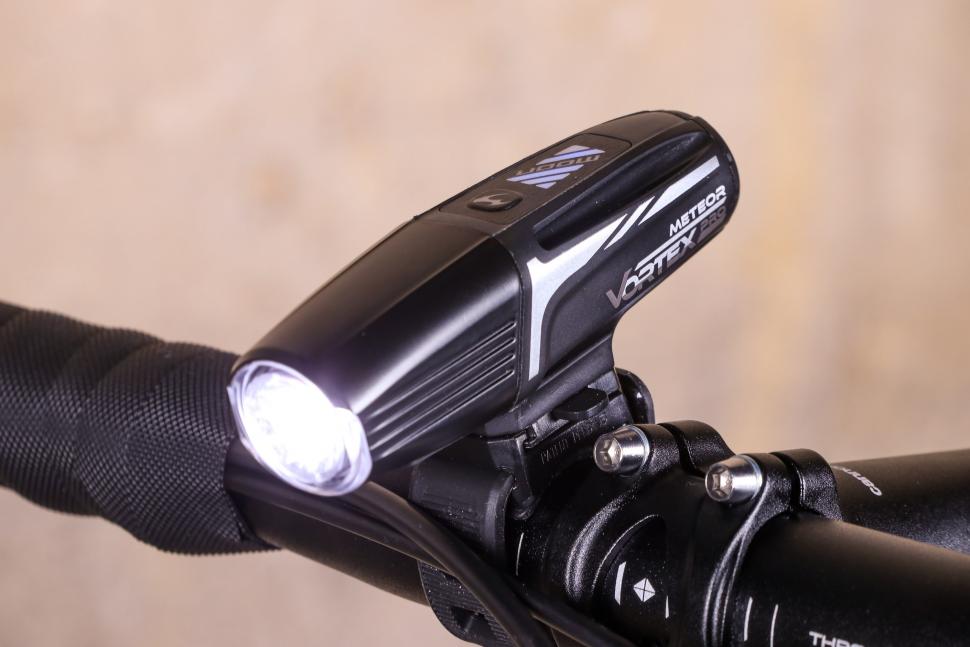 Bike lights: 10 insider facts you need to know before you buy

Tech advances mean that today's bike lights are a world apart from those of even a decade ago but they're not without their flaws – some bigger than others.

If you're in the market for some new lights, here are a few things to bear in mind...

Not many conform to the rules

The Department for Transport says, "If either of [your front and rear] lights is capable of emitting a steady light, then it must conform to BS6102/3 [or an equivalent EU standard] and be marked accordingly, even if used in flashing mode.

"Purely flashing lights are not required to conform to BS6102/3, but the flash rate must be between 60 and 240 equal flashes per minute (1-4 per second)."

In fact, few lights are marked as conforming to BS6102/3 or an EU equivalent. You're very unlikely to be challenged by the police as long as you're showing a white light at the front and a red light at the rear, although technically a lack of conformity could be held against you in court in the event of a road traffic incident. 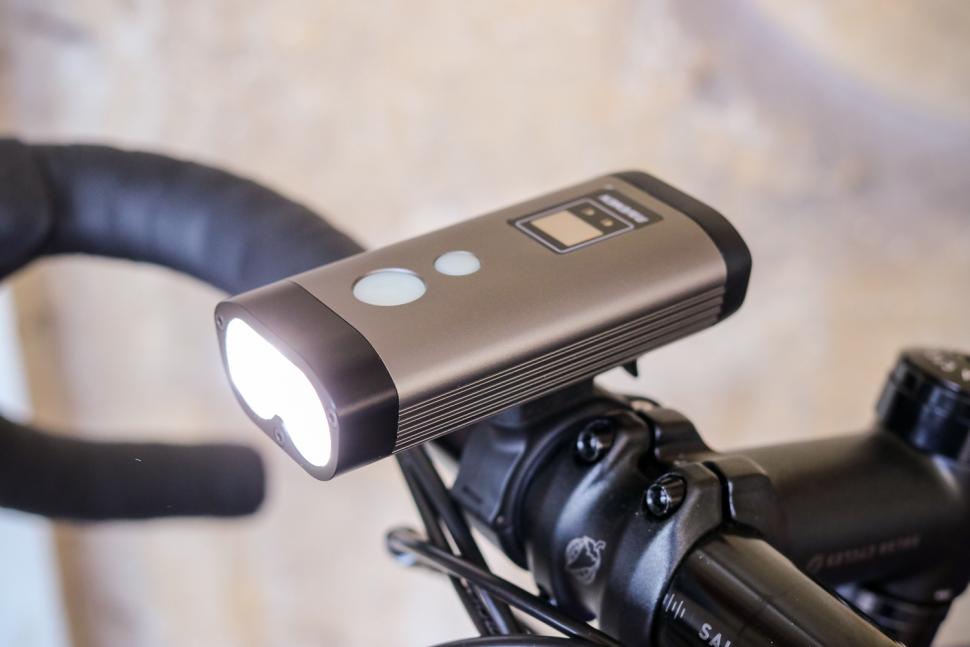 Some settings can dazzle other road users

The Highway Code says, "You MUST NOT use any lights in a way which would dazzle or cause discomfort to other road users, including pedestrians, cyclists and horse riders."

Some lights, particularly those designed for off-road riding, can easily dazzle oncoming traffic if left in certain settings and/or at certain angles. You need to position your lights in such a way as to avoid this, and be prepared to switch to a lower setting when vehicles approach in the opposite direction.

Not all beam shapes are equal!

The shape of the beam can vary hugely between lights. Some – especially those designed primarily for mountain biking – use an unregulated beam and plenty of firepower. 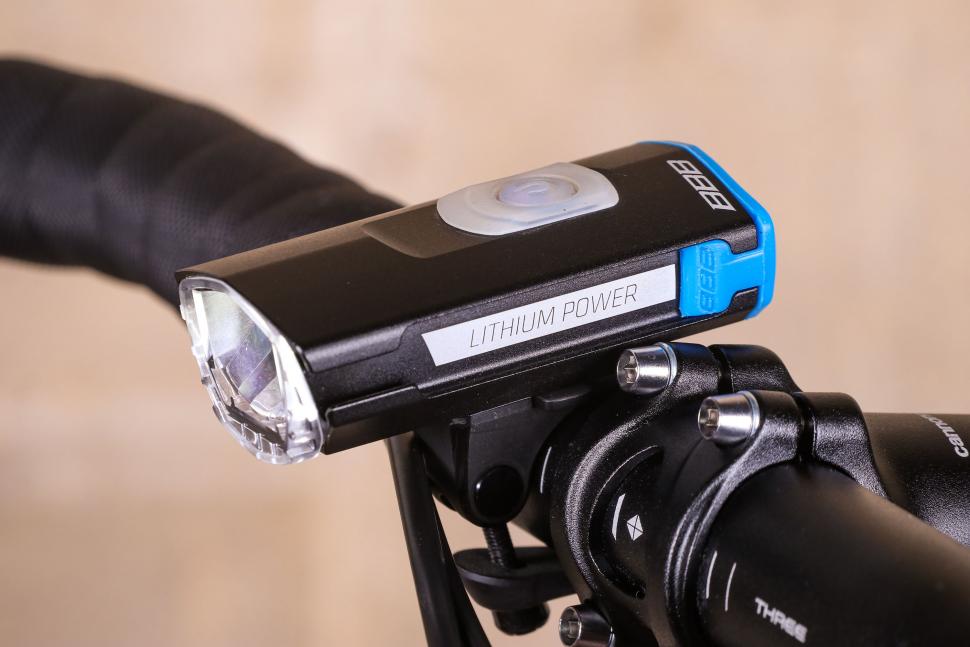 Others follow German requirements by offering a more squat beam pattern that won't have this effect. However, of all the lights included in road.cc's Front Light Beam Comparison Engine (below) this year, only the BBB Swat (above) would be legal in Germany.

That said, lights that we've tested from Exposure, Knog and Ravemen do offer road-focused beam patterns. Check out results in the Beam Comparison Engine (below) to make sure you get exactly what you're after.

Closely related to the above point, more lumens don't necessarily make for a better light.

Most brands describe their lights in terms of lumens – a measure of the total quantity of visible light emitted – but the charts in our Front Light Beam Comparison Engine are based on lux – how much light arrives at a given point in the road. Lux takes into account the area over which the lumens are spread.

There's little point sending a lot of light upwards or a long way off the side of the road, for example. Similarly, there's little point having a super-bright central spot to a beam if it means your eyes can't adjust to anything surrounding it.

For our Front Light Beam Comparison Engine we measure the lux value of the beam two metres from the lamp. We take readings at the centre of the beam and then at 10cm increments until we get a metre from the centre, giving 11 readings in all. Again, we'd urge you to look carefully at the results to make sure you get a light that's suitable for your needs.

Some lights can run for much longer than others between charges.

Most people limit their night-time cycling to getting to/from work or maybe a couple of hours on a midweek training ride. If that's you, the majority of lights will be able to cover it. 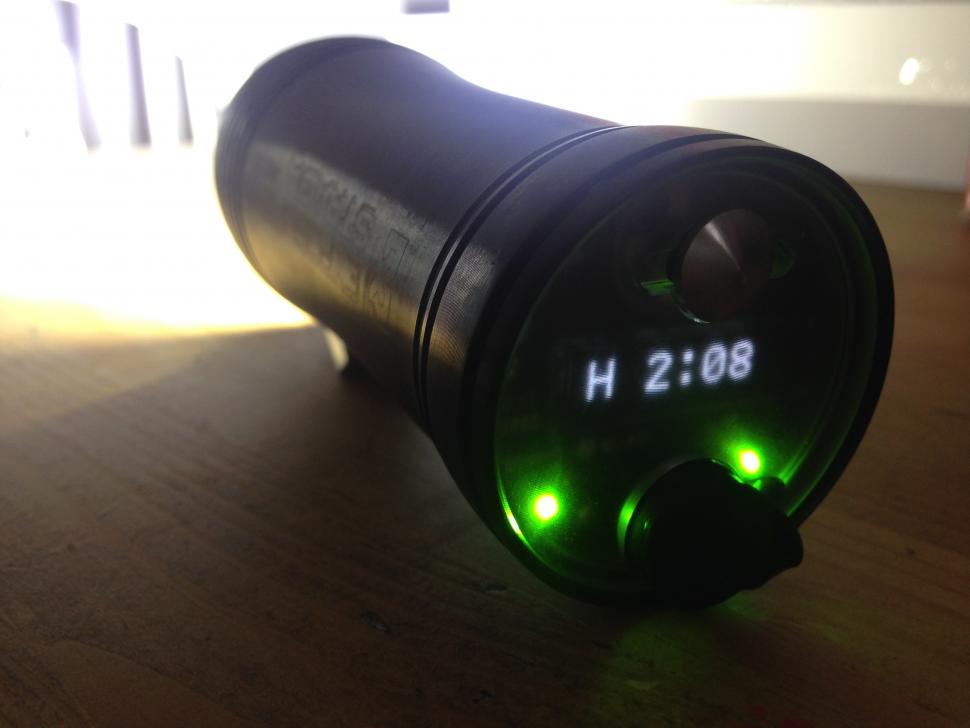 It's worth mentioning, though, that before you buy a new light you should check the manufacturer's claimed run-time that refers to the setting you're likely to use most – which might not be the run-time for the lowest setting that they shout about on the packaging. 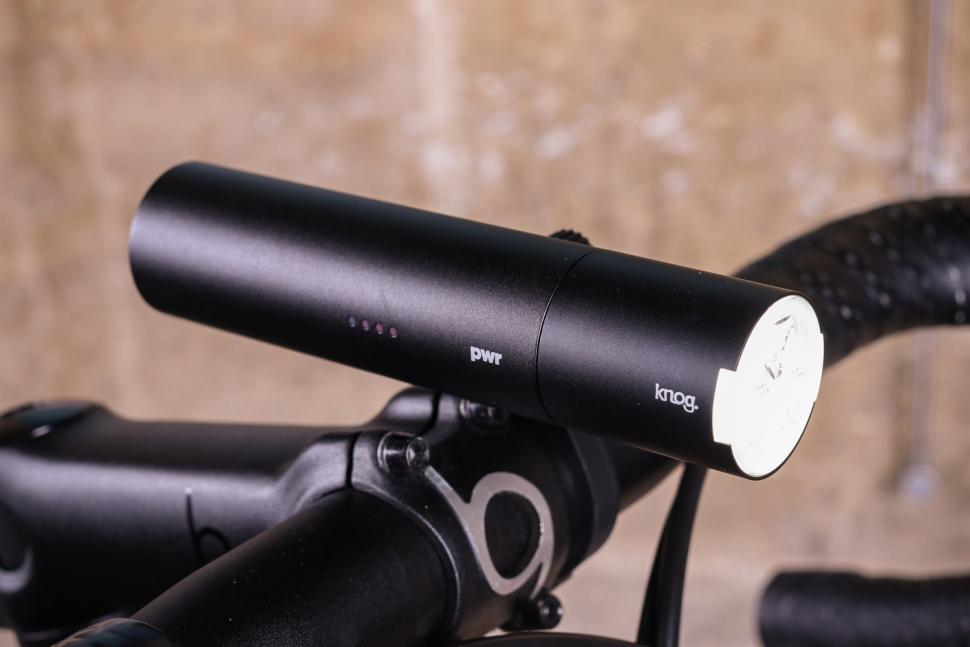 Most lights have some means of telling you how much battery charge remains – a gauge or a button-colour indicator, for example. Even so, you might occasionally forget to check, particularly if you ride at irregular intervals.

The best advice is to carry emergency front and rear lights in your bag or seatpack – small ones that are always fully charged. 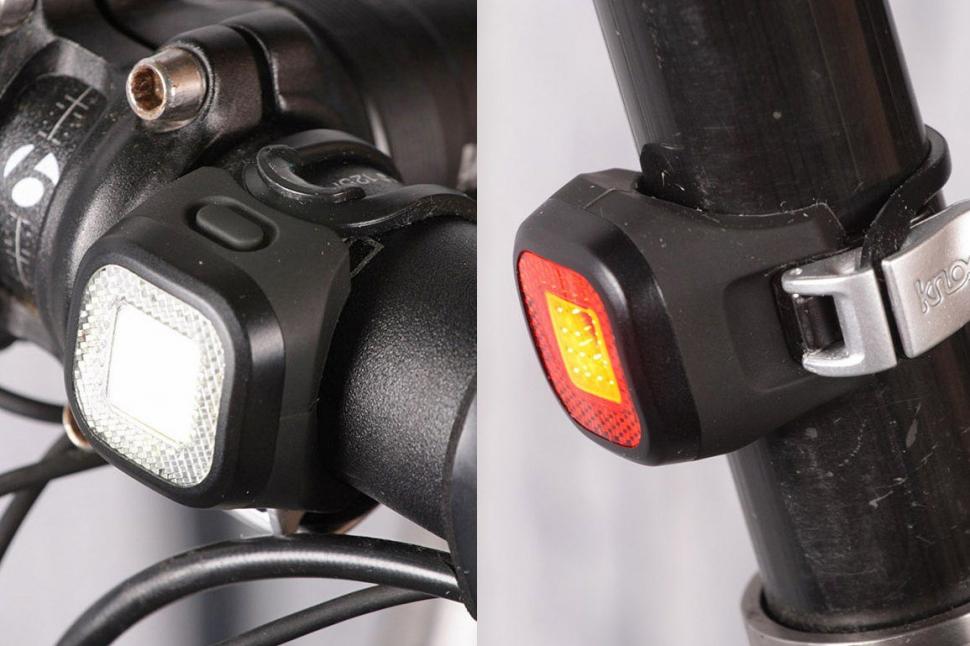 The Knog Blinder Mini Chippy Twinpack (£47.99) lights are tiny and weigh just 36g, for example. You won't see far with these but they'll make sure you're noticed should your main light run out of juice.

Check out the mount

Don't forget to take a good look at the mount before buying any new light. It's sometimes the weakest point of the design. 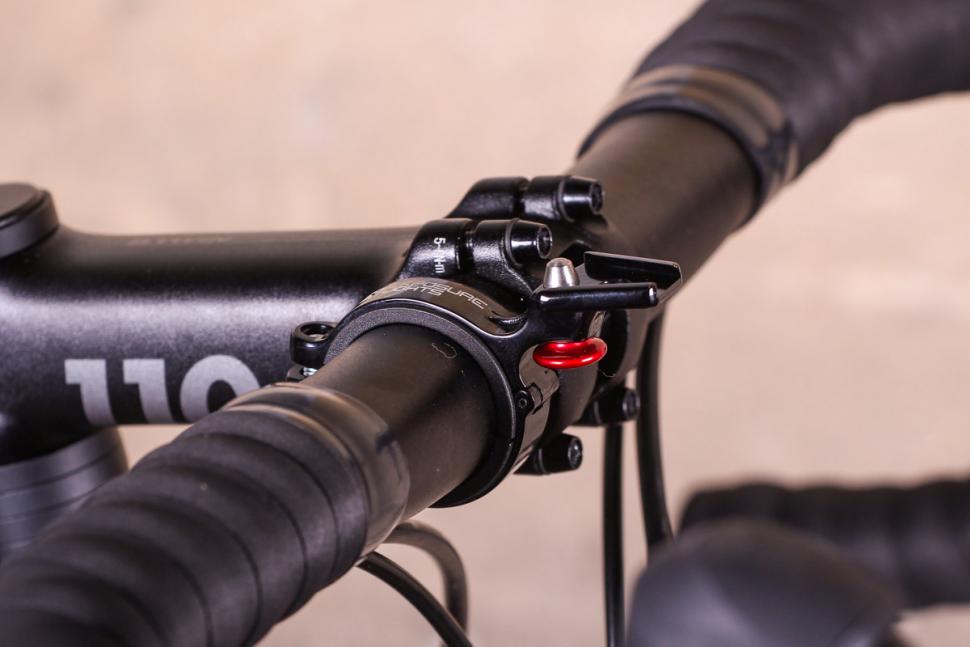 The best light in the world will have you cussing if a poor mount doesn't hold steady and it ends up pointing at the Moon every time you hit a pothole. Finding out at the end of a ride that your rear light has been ejected somewhere along the route is similarly bad news.

It's difficult to tell in advance whether a mount is going to perform well and prove durable, but in our experience you're safer with one that can be tightened in place rather than one that's held with an O-ring (although some O-rings work fine on some handlebars). Really, though, you need to know about first hand experience from other riders, so our reviews are a great place to start.

Go to our front light reviews

Go to our rear light reviews

USB charging can be slow

The ability to charge a light via USB can be useful but if you're using a USB port on your computer it's going to be slower than plugging it into the mains. 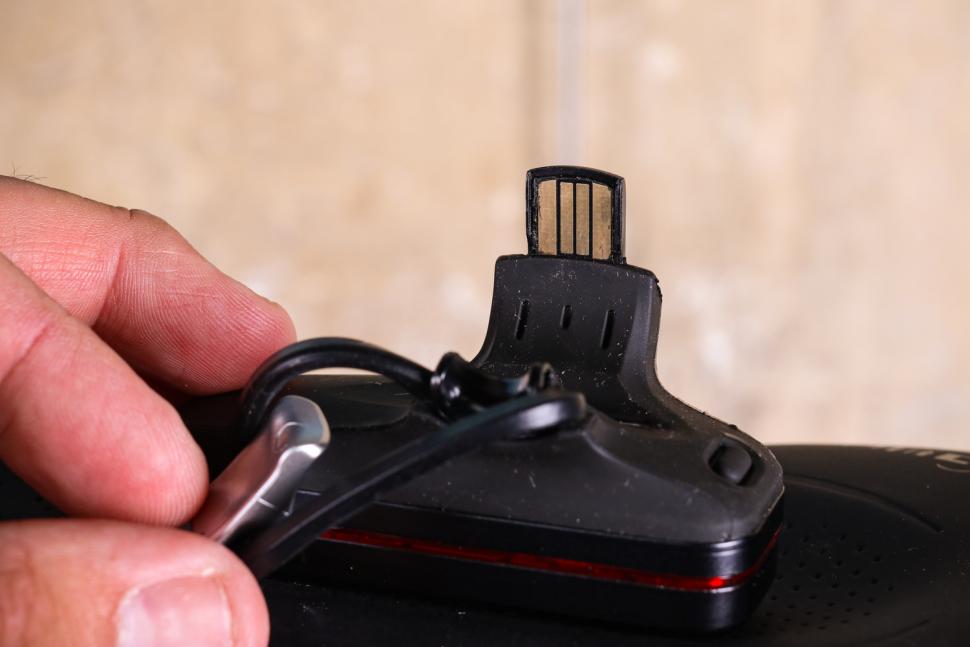 Also, USB recharging can sometimes be a faff. For example, Apple's latest laptops come with USB-C ports only. That means you'll need an adaptor to charge some lights.

The rubber flaps covering USB ports can sometimes be a pain to use too. They don't always push back in easily after charging and sometimes pop out unexpectedly in use, allowing water and dirt inside.

Last year's version of a particular light might have got great reviews but that doesn't mean that this year's one will be as strong. Manufacturers rarely leave their lights alone, even when they've got it right first time, so rely only on the latest reviews.

The tech will be superseded before you know it

Chances are that the lights you're currently using have already been replaced by something better. Sorry!

Lezyne once told us that light technology advances every few weeks. By the time a product gets produced, shipped and hits the shelves, it's already out-dated.

Of course, you could say the same about a lot of technology, and it doesn't mean you need to update your lights constantly, but it does mean that even if you spend a lot of money on the best, it won't be the best for long.