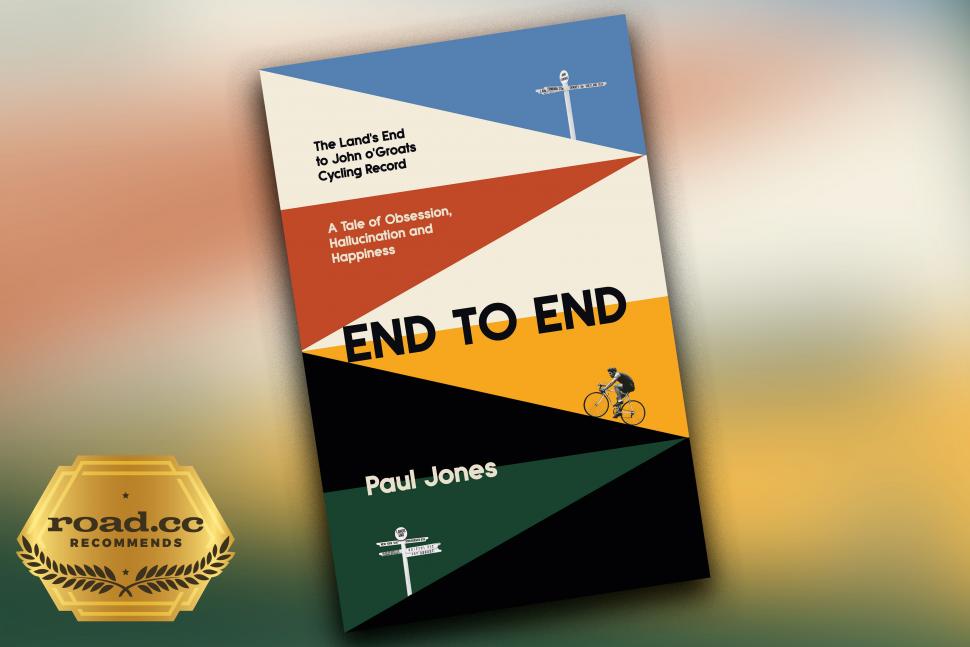 End to End by Paul Jones

End to End is one of the best cycling books I've read. It's beautifully written and full of fascinating insight into the UK's signature long-distance challenge, but it's not just that: part travelogue and part confessional, Paul Jones' book is both about him and not about him, about cycling and not about cycling; the disparate main threads intertwine brilliantly into a coherent, delicate narrative.

It is about cycling, of course. You'll be in more familiar territory if you understand the concept of a British Best All-Rounder, and how racing against the clock works. But End to End is largely free of technical talk, and where things are central to the theme - the Road Records Association, for example - they're patiently introduced and explained.

For all the technological advances along the way, the Land's End to John O'Groats record is blissfully simple: start the stopwatch at one end of the country and stop it at the other. If you go faster than the current record, then it's your name in the book... until someone else comes along and beats you.

It's that simplicity that turns it into a challenge that transcends cycling and gives it a place in the national psyche: testing your limits of endurance by doing the longest point-to-point ride the country has. Not everyone could tell you who the record holders are, but everyone knows what the end to end is.

Jones has spent a huge amount of time researching the record's origins, and interviewing past and present record holders. Equal weight is given to the women's and men's records, because at its heart this is a book not specifically about cycling but about people.

It's a particular mindset that thinks riding non-stop for two days (and often more) is a good idea. As a result there's a commonality in the sort of person the record attracts, and what kind of experience it is.

And it's a pretty exclusive club, too: from the first record attempt by George Mills on a penny farthing in 1886, to Mike Broadwith's 2018 time of 43 hours 25 minutes and 13 seconds, there have only been 11 men's record holders. The women's roster is even shorter: since Lillian Dredge's trailblazing ride in 1938, there have only been eight record holders – including Lynne Taylor, whose 2002 record still stands today.

Jones speaks to many of them, and familiar themes emerge of the ebb and flow of a record attempt: the vagaries of the weather, which can make or break a ride before a pedal is turned; the generally uneventful morning miles east along the bottom of the country on fresh legs, before turning north to the Midlands and the first night in the saddle; the encroaching fatigue; the slog over Shap fell; the slow descent into madness as a second night beckons.

It's not a book that makes you start planning your own attempt, because really – it sounds rubbish. The final leg of a record attempt is another world: one of hallucinations, not recognising members of your own family, not having the strength in your neck to support your own head. This is not a challenge for normal mortals.

As if to highlight that point, the book's other thread is Jones' own experience of riding it, in sections, at a time of enormous upheaval in his life. Having resigned his job as a headteacher with no firm plan of what to do next, the Jones that begins the odyssey at the Land's End signpost is best described as fragile.

A handy time trialler and hill climber at the peak of his powers, he's out of shape and out of his depth, with the 250-mile first leg to Bristol the longest ride he's ever attempted.

Further down the spiral

But where all the tales of record runs are a downward spiral, Jones' ride from one end of the country to the other feels redemptive, and it's the perfect counterpoint to the madness of doing it against the clock.

It's not pretty, and along the way there are tears – and some unusual roadside finds. But the journey north is in the end a lifting of the head.

By the end of his record run, Mike Broadwith had to ride with his elbow on the tribars and his chin in his palm just to see the road. Jones' story is the ideal juxtaposition: as John O'Groats approaches, you feel he is finally able to look forward.

The publisher says: "End to End is a captivating and beautifully written narrative. A lyrical account of the journey sits alongside meetings with amazing cyclists; people like Eileen Sheridan; who covered the distance in under three days in 1954, or current men's record holder Michael Broadwith who did it in a scarcely believable 43 hours. Paul Jones reaches further back to the very first attempts in the 1880s, undertaken on penny farthings, fuelled by Victorian values and patent medicine.

"For the author, what starts as a simple way to frame the narrative transforms into a deeper search for meaning amidst the ceaseless clamour of life, work and relationships. It becomes a trip through the contours of the mind as well as the map, from Bodmin Moor to Shap Fell, the Cairngorms and the Caithness coast.

"End to End is a portrayal of hope and ambition, of what happens when things go wrong and how hard it is to make them right. It is about courage, obsession and joy, but above all else, it is a compelling exploration of why journeys matter for all of us."

An excellent delve into the history of the record, interlaced with a personal journey.

This is an excellent read, and highly recommended.