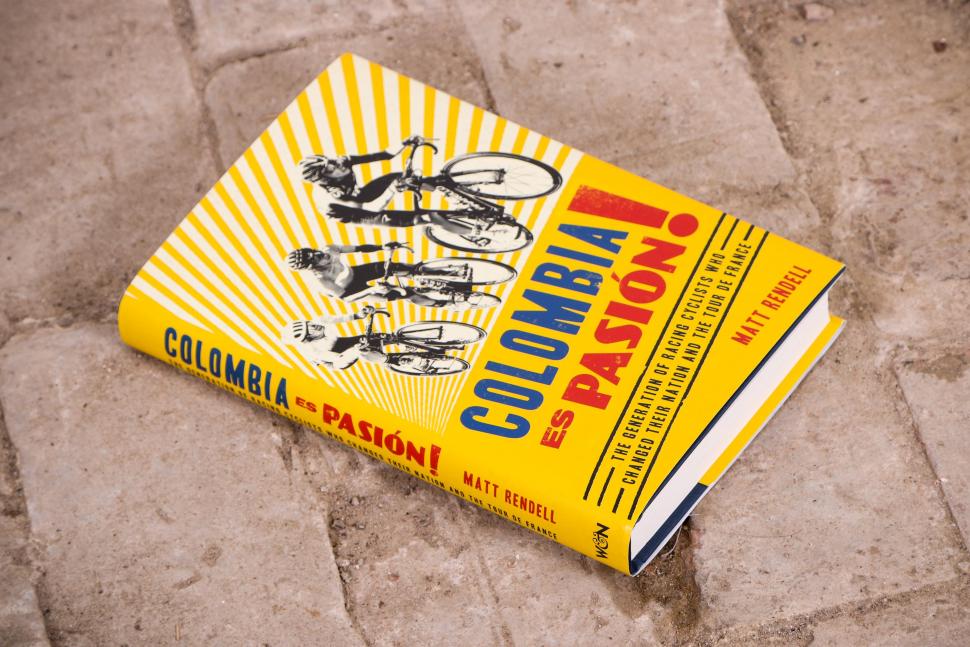 9
10
Everything you ever wanted to know about Colombian cycling and its current professionals
Topical and thorough
Niche appeal
Weight:
582g
Contact:
www.weidenfeldandnicolson.co.uk
How we test

Colombia has been 'punching above its weight' in professional cycling recently, with the zenith coming when Egan Bernal won the Tour de France last year. What better time for a renowned expert on Colombian cycling, Matt Rendell, to write Colombia Es Pasión! and help us understand what's going on?

As you might expect, Rendell gives a brief biography on all of the current crop of Colombian professionals, including a few that might not be familiar to you; he also provides reports of the major races where those Colombians have already made their mark – from the Colombian perspective, of course.

However, there is a lot more to the book than that, with Rendell also wanting to make sure that we appreciate what it means to be a Colombian cyclist by covering such matters as the state of the economy, the relevance of politics, the influence of the military, and the social history of the country; it is very apparent that Colombian cyclists are a product of all those things.

The introductory chapter is pretty comprehensive, and might even be enough detail for some people. However, if Rendell has done his job properly it should serve to pique your interest – and if you carry on you soon discover that no outsider could be better equipped to write about cycling in Colombia than Rendell.

There are several things that struck me: firstly, the status of cycling in Colombia, with it being deliberately chosen as 'a form of soft power which has helped fuel their country's integration into the world economy'. In this country probably only football supporters could properly appreciate what that means.

Secondly, how the odds are stacked against any cyclist actually succeeding, partly because 'the story of Colombian cycling is inescapably the story of Colombian peasantry'; one wonders what untapped potential lies undiscovered, with so many unable to make use of any opportunities available.

Thirdly, although riding over mountainous terrain at high altitude can be an advantage for one type of rider, it is not the only reason for Colombian success: other countries don't reap the same benefit from similar conditions – and sprinters such as Fernando Gaviria from UAE Team Emirates can also succeed.

Finally, the extent to which Colombia has changed, becoming 'a complex, multicultural, mid-to-high income country'. It even boasts 'a fauna and flora rivalled in richness only by Brazil'. Who knew?

> Buyer’s Guide: 36 of the best books about cycling

Unfortunately for Colombia, it still has a reputation for some less attractive attributes, and Rendell covers them as well. The most obvious is for drugs, both recreational and performance-enhancing: some of cycling's benefactors made their money with the former, and the sport still seems to take advantage of the latter.

Rendell clearly had extraordinary access to the major players in Colombian cycling, as is evident in the quality of interviewee. I had hoped that he would be able to reveal a bit more about the controversy that surrounded Nairo Quintana's victory in the 2014 Giro d'Italia, where there might have been some confusion as to whether the stage was neutralised or not, but it seems that there is little to add to what has already been said.

Rendell touches upon another topic that is very relevant at present, although he does not explore it further: for 'Colombia's cyclists and cycling more generally, with its sponsorship-based finance model, there was a deeper question: how useful were dark-skinned, indigenous descendants with peasant farming origins really going to be for giant companies hawking holidays, mobile phone contracts and satellite TV accounts to European and North American consumers?' Team Ineos don't seem to have that concern, with Bernal, Henao, Rivera, and Sosa all from Colombia; Carapaz and Narvaez from nearby Ecuador are arguably in a similar position.

One of Rendell's previous books, Kings of the Mountains, covered the story of Colombian cycling until the turn of the century, in which Rendell's knowledge and passion was evident; effectively, Colombia Es Pasión! is the successor to that seminal work – and Rendell is no less knowledgeable and passionate this time around.

When I reviewed another book about Colombian cycling recently, The Big Climb, I felt that it would be too superficial to satisfy anyone who had a deep interest in the subject; conversely, I fear that Colombia Es Pasión! could be be too detailed for anyone who doesn't have such an interest! If The Big Climb whetted your appetite, then Colombia Es Pasión! will satisfy it.

By winning the 2019 Tour de France, Egan Bernal became the race's youngest champion in 110 years, and the first from the South American nation of Colombia. His victory brought decades of national yearning to fruition, and capped the achievements of a golden generation of Colombian cyclists.

For, in the years before Egan's victory, Nairo Quintana won the Tours of Italy and Spain, even coming within 72 seconds of winning the Tour. Rigoberto Urán, Esteban Chaves, Miguel Ángel López and Fernando Gaviria took stage wins, donned leader's jerseys and made final podiums at cycling's greatest events. They, and other world-class Colombian talents, made their nation a cycling superpower.

Yet its cycling sons are not the products of a rigorous sports system that nurtures them through the ranks to the pinnacle of globalised sport. They come from harder backgrounds, that surprise, shock – even, at times, enchant.

The visibility they have secured their homeland has helped open it to international tourism and trade. After decades of violence, corruption and civil unrest, a new, revitalised Colombia has re-entered the community of nation, thanks to its cyclists.

This book is about their lives and dreams: it tells inspiring stories of overcoming poverty and violence, sickness and corruption. It explores the unique sporting microcosm that lies behind Colombia's world-beating riders, and how their achievements spurred a nation to prosperity and peace.

The thoroughness of the author.

If you want to understand in detail why cyclists from Colombia can succeed at the highest level, there is no better book available – it's excellent – though the subject won't appeal to everybody.