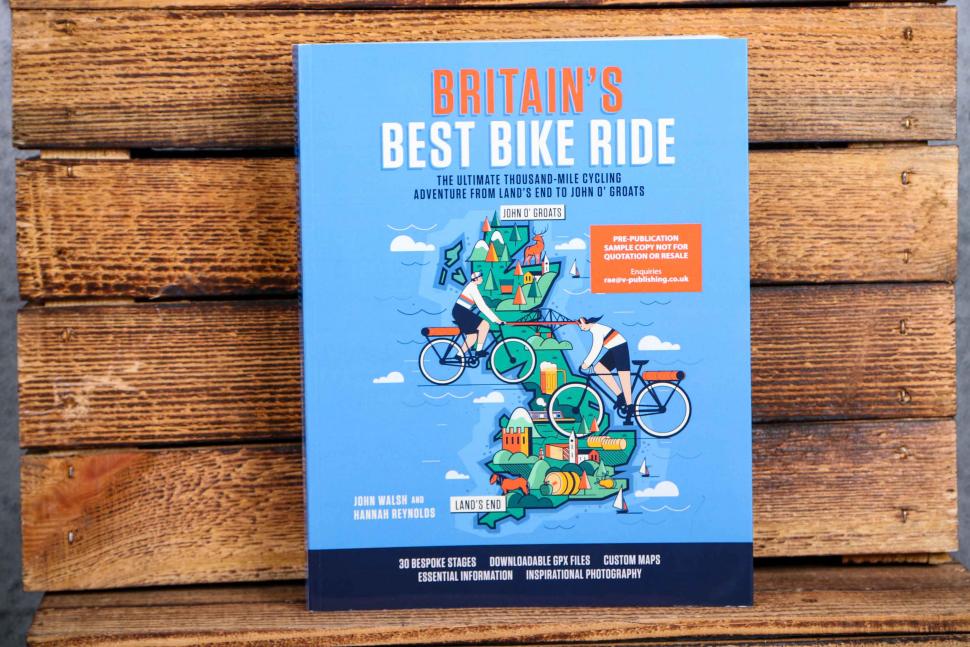 On the weather forecast on the radio a little while back, the presenter began with a question: did you know that Britain only has one named wind? 'Yes!' I replied. 'I read about it last night!' That's the sort of nice little extra detail you get in John Walsh and Hannah Reynolds' book, Britain's Best Bike Ride. You also get a load of other more useful stuff that should see you right to ride the length of the UK – or, at the very least, be inspired to.

Whether it's 'the ultimate thousand-mile cycling adventure from Land's End to John o' Groats', as the subhead claims, I can't say, but the book certainly makes a good fist of being a useful, informative and inspiring guide to cycling LEJOG.

First off, it has maps for every stage of the journey, and I do love a map. What's more, you can download them all as .gpx files. That's handy, as it's not a book you'd be wanting to carry with you, it's a bit big for that.

The journey is divided into 30 stages, so you could take a month to do the whole trip if you had the time (I had a neighbour who took three weeks just to ride from Land's End to Carlisle), or you could combine two, three, four or more stages, depending on how fit you are and how quickly you want to complete the ride.

Handily, John and Hannah have provided some ideas for three different itineraries: the classic two-weeker, a three-week explorer, and a 10-day challenge.

There are obviously many different routes you can take to get from the bottom of Cornwall to the top of Scotland – I've ridden the Ride Across Britain version, for example, which sets off from Land's End in a completely different direction to John and Hannah's.

In Britain's Best Bike Ride, their route starts off hugging the north coast of Cornwall, and even though it heads inland later, it misses out the RAB's challenging Cothelstone climb in the Quantocks, so I'm already warming to it. (Though it does still include the Lecht and Glenshee in back-to-back gruelling stages in Scotland, as does the RAB.)

The book begins with some general information about the journey, and what to expect from the different regions (the stages themselves are grouped into nine regions). It's nicely written in conversational style, though I do have to take the authors to task for saying you're 'briefly in Avon' in the Somerset region (Avon no longer exists as a county; but I am a pedant).

You also get 'Best stages for' suggestions – views, climbs, food and others – and a table listing the stages and their various stats. I did think there could have been a cumulative mileage column here, but you get that with each stage's profile, next to or on each map.

There's also some useful info on how to get to Land's End, where to stay, where to eat and the like, and a corresponding chapter at the end on how to escape from John o' Groats...

As for the stage chapters, each opens with a brief overview, along with a reminder of its length and how much climbing is involved, plus suggestions for where to stay, where to eat, and where to buy supplies, as well as details of nearby bike shops, if they exist.

You also get really quite detailed descriptions of the route for that particular stage, broken into smaller chunks, and the directions to follow. To be honest, I'm not sure why the authors have included directions here, unless you really were to take the book with you on your journey. The real benefit, on the road, will likely come from the downloaded maps (though paper versions are always good to have).

To pick one example, stage 8, Chew Stoke to Tintern: is it going to be helpful to know that 'After Easter Compton fork right to Pilning railway station. Pass underneath the railway line before forking left' – and that kind of thing?

If you don't use a GPS computer then perhaps it's very handy – is this what touring cyclists did in the old days? – but you're carrying a fair bit of extra weight, or taking a lot of photographs on your phone before you go...

There are some general observations within these sections too – spooky warnings for the Wye Valley, the correct way to pronounce 'Scone' Palace (and it's neither of the two ways you might think), and notes on various historical places – and I can't help thinking John and Hannah would have been better just sticking to those rather than including route directions, unless those directions were also downloadable. Jack Thurston's Lost Lanes books, for example, don't bother with step-by-step route instructions – but, crucially, they are downloadable, so you could save them on your phone or print them out if you wanted to (easier for a single day route than a 30-stage journey, admittedly), in case you really can't work out which way to go.

Then again, if you do carry the book with you for some night-time reading, it could be a nice way to prep for the day ahead (apart from the spooky stories in the Wye Valley...).

But really, I see this book as far more an inspiration than a step-by-step guide to the route – that's what the maps are for. (Feel free to argue, in the comments.) And it's already got me wondering whether I could wangle a three-week holiday this year...

By the way, that named wind is called the Helm Wind, which blows on Great Dunn Fell, said to be England's highest paved road – luckily, the LEJOG route doesn't go up it... And Scone Palace? It's 'skoon', apparently.

From the publisher's website: Britain's Best Bike Ride by John Walsh and Hannah Reynolds is an inspirational guide to making the most of this extraordinary journey. Illustrated with stunning action photography and overview mapping; downloadable GPX files are also included.

Britain's Best Bike Ride by John Walsh and Hannah Reynolds is a beautifully illustrated and inspirational guide to the ultimate thousand-mile cycling adventure from Land's End to John o' Groats.

There are many ways to cycle between Land's End and John o' Groats, but the route specially created for this book, LEJOG1000, is designed to show you the quiet roads, picturesque villages and dramatic landscapes that make the experience memorable. Instead of taking the most direct route, it invites you to explore the best of each region you pass through.

You'll discover stunning beaches and wild ponies on your way along the quiet wild-flower-edged lanes of Cornwall and Devon, follow the meandering River Wye in Wales, wind your way through a post-industrial landscape of canals and mill chimneys in the North West, before moving on to the epic climbs and grand vistas of Scotland.

Carefully crafted to allow you the freedom to create your own ultimate adventure, the route is split into 30 adaptable stages, each finishing in a town or village with suggested places to eat, drink and stay. Create your own bespoke itinerary, or use one of three itinerary options provided: the 2-week classic, 3-week explorer or 10-day challenge.

Along with stunning photography and lively insightful writing you will find all the practical information you need to plan your LEJOG1000 – route directions, bespoke mapping, cafes, pubs and local bike shops. Downloadable GPX files of the route are also available.

Britain's Best Bike Ride will inspire you to take on this once-in-a-lifetime challenge – you'll be pedalling into John o' Groats having experienced the very best of Britain on a bike before you know it!

Good detailed maps for every 'stage' – and gpx files you can download too.

A few captions here and there wouldn't go amiss. And apparently in the Somerset section you're 'briefly in Avon'. Well, you might have been before it was abolished in 1996...

It's very good – informative, entertaining, educational and inspiring. Being able to download all the maps is ideal – though downloadable route directions would be good too. A Kindle/e-book version free with every paperback, perhaps...

I regularly do the following types of riding: commuting, sportives, general fitness riding,