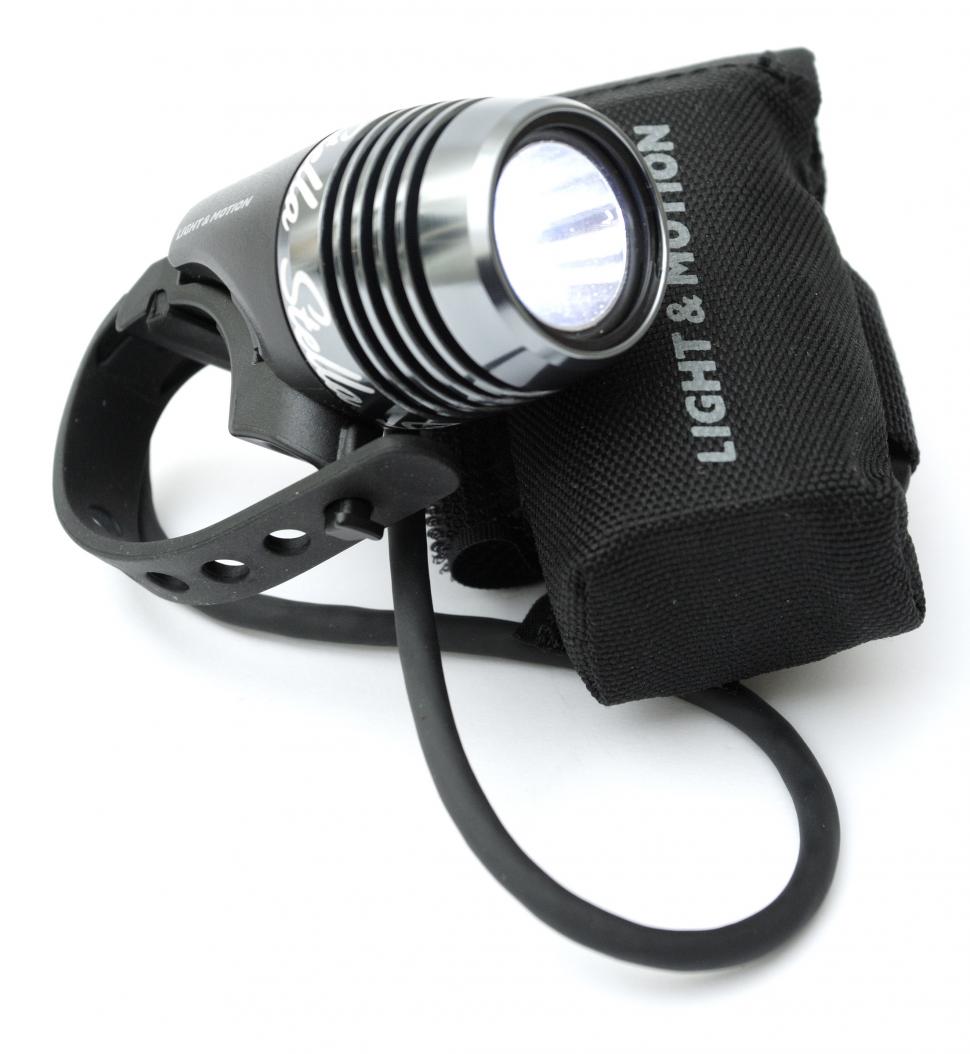 6
10
Can't fault the quality and beam, but why a battery pack? The AA version would get a higher mark.
Weight:
285g
Contact:
www.ultimatepursuits.co.uk
How we test

The Light & Motion Stella is a single bulb LED encased in a sturdy Aluminium and resin case and powered by a tiny rechargeable pack.

A quick look inside reveals that it consists of, erm, four AA batteries, and at 2000mAH not even particularly capacious ones. That being the case, you're much better off buying the AA version, which is £30 cheaper, and getting your own batteries and charger. You'll save money, and it's simple to carry extra cells to extend the run time.

It doesn't take long to realise that the Stella's focused beam lends itself best to helmet mounting. The 285g all-in weight is easy to carry there, and you even get a very good helmet mount as part of the package. The lead is just the right length to position the battery at the back of the helmet, and the Stella looks and feels excellent as a helmet light.

Being able to put the light where you want it makes the Stella feel more powerful than it is, but let's be clear: this is a very bright light, plenty bright enough to get an angry flash from drivers if you look directly at them. In a world where the watchword for burn times is optimism, it's also refreshing to find a unit that not only hits but far exceeds its stated maximum. Two hours came and went, and it was getting on for three by the time the on/off button started flashing to warn of impending darkness. Even then, we got another 20 minutes. With a set of 3000mAh AA cells I'd expect the 120 AA to run for well over three hours, possibly even four.

What's not to like? Well, the head unit gives a nod to side visibility with a glowing switch button, but you'd certainly be better off running it as a second light and getting a decent standard LED for your bars if you really want to be seen from the side. And it's pretty expensive.

The benchmark for now is the not-perfect-but-unbelievably-cheap Ultrafire WF606A, which you can pick up for about £12. The Stella is brighter, but not by much, and it burns for longer, but not by much. Is it better than a 606, then? Yes. But it isn't better than two, and you can have two for a third of the price of even the AA-powered version of the Stella. I had them side-by-side on my helmet for comparison, which was good, but it was much more fun just keeping them both on... cars beware!

In conclusion, the Stella 120 is a very likeable system, but it's madness to sell a rechargeable version for a ton and an AA powered version for thirty quid less. They're using the same technology. Lets just all admit that rechargeable AAs are plenty good enough now and stop faffing about with proprietary packs and chargers, shall we?

I have enough chargers. At £70 the 120 AA is hardly a steal but it is a very well-constructed and well-thought-out system, and the beam is excellent, and fails much more gracefully than cheaper torches when the batteries die. For those reasons it's definitely worth a look