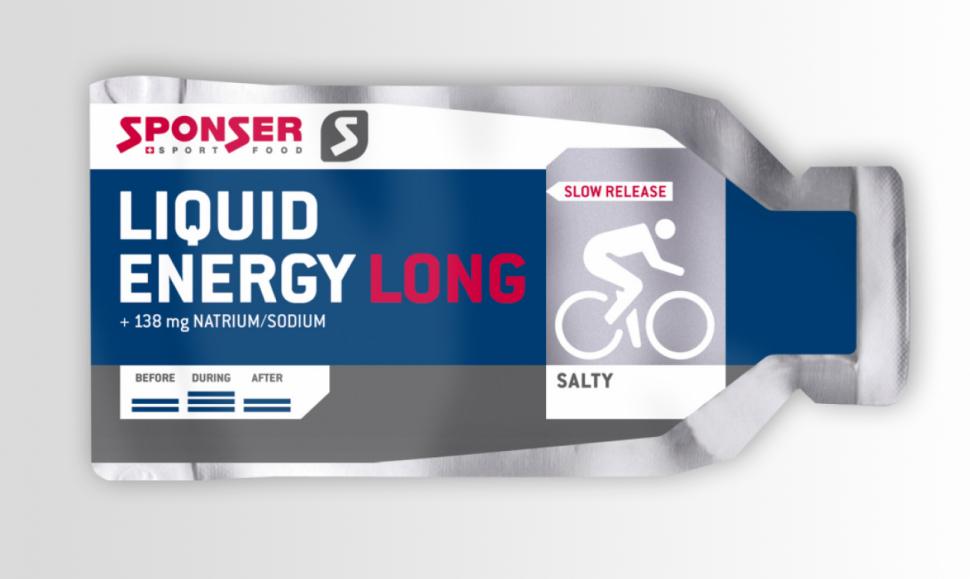 7
10
Unusual savoury-flavoured gel delivering a good supply of energy, but the taste won't be to everyone's liking
Weight:
40g
Contact:
www.sponseruk.com
How we test

Sponser Sport Food is a Swiss brand of nutrition products. We've previously reviewed their Liquid Energy gel on road.cc but this is the 'Long' version, designed for longer endurance events. Despite the name, it isn't really a liquid - it's also a gel - but the thing that makes it totally different from other gels is its flavour.

Although it isn't sweet, it isn't really savoury. And despite the sachet saying 'salty' it doesn't actually taste of salt either. There's a definite malty flavour, though, which brings back childhood memories of bed-time barley drinks. The overall impression is hard to sum up, but think of it as a thinnish gel made from Horlicks, without sugar, and you've got the idea.

Moving beyond the taste, how much energy does this gel contain? According to Sponser's UK website, each 40g sachet of Liquid Energy Long contains 23g of carb, providing just under 400 kJ (or 94 kcal) of energy. In layman's terms, the ingredients are designed to deliver a bit of the carb quickly, and the rest slowly, which is better for endurance events like sportives. (For most cyclists, about 20g of carb is enough energy to keep going for between 20 minutes and half an hour, depending on various aspects such as sex and body mass - plus of course how hard you're trying.)

Liquid Energy Long contains trace amounts of fat and protein. There are no artificial colourings, preservatives or sweeteners. This gel is also lactose free and suitable for vegetarians. There is a dash of sodium and potassium, which may help delay the onset of cramp.

The first sachet I tested was at my desk. The taste was such a surprise that I couldn't finish it. I did write the next three paragraphs very quickly though. Next, I tried a sachet halfway through a long training ride. Being hungry after 30 miles of swift pedalling made a big difference, and the gel was easy to finish. It definitely made a change from my usual array of sweet energy gels, but I still wasn't convinced I'd want another an hour later.

The next test was during a hard 100-mile sportive, where I saved a couple of Liquid Energy Long sachets until the last 25 miles. This time, they made a welcome change from the sweet stuff I'd been eating for the previous five hours or so, and definitely provided the little boost and then the sustained supply of energy I needed to gallop to the finish.

A savoury gel (or, at least, a non-sweet gel) is an unusual idea in a market flooded with sweet varieties, and may be a welcome change for anyone who finds 'normal' gels too sticky or sickly. But it has to be said, Liquid Energy Long's distinct malty tang won't be to everyone's taste, so I'd definitely recommend trying just one on a training ride, before gulping your way through a pocketful on an important race or other big outing.

A single gel costs 99p, which is about on a par with similarly sized carb-based gels from other brands, but it isn't a bargin. A box of 40 costs a penny under £39 at Sponser's UK on-line shop, which isn't much of a discount either, especially when shipping within the Uk will cost you another six quid.

Unusual savoury-flavoured gel delivering a good supply of energy, but the taste won't be to everyone's liking.

This is a carb-based energy product, aimed at endurance athletes. For cyclists, it's best used during longer rides such as sportives that will take three hours or more.

The Sponser UK website says Liquid Energy Long is "a highly concentrated, salty flavoured energy gel with a balanced combination of quick and slow release carbohydrates to ensure both an immediate and continuous supply of energy."

The website goes on to say: "Liquid Energy Long is ideal for endurance athletes who rely on a constant supply of energy over a long period of time. The isomaltulose and barley fibres containing beta-glucans delay the absorption of sugar into the blood, preventing the quick energy highs and equally quick energy crashes of many gels. As well, many athletes find themselves getting sick of sweet tastes towards the end of an endurance event. The salty but still neutral taste of Sponser's Liquid Energy Long is the first alternative to conventional sweet gels.

Performance is very good. When used towards the end of a sportive, these gels gave me a noticeable boost almost immediately after consumption, and then delivered a sustained supply of energy for about half an hour.

On a crude carbs-per-quid basis, Sponser Liquid Energy Long is on a par with gels from other brands, especially when bought singly. However, other brands offer better discounts when buying boxes of 20 or more.

Overall, Sponser Liquid Energy Long performed well. These gels provide a boost quickly after consumption, and then deliver a sustained supply of energy for up to about half an hour of hard cycling.

The taste took some getting used to, although it is a welcome change to sweet gels.

Did you enjoy using the product? Yes, but only in the final throes of a long hard ride when another sweet gel was not appealing.

Would you recommend the product to a friend? Yes, especially if they didn't like sweet energy products.