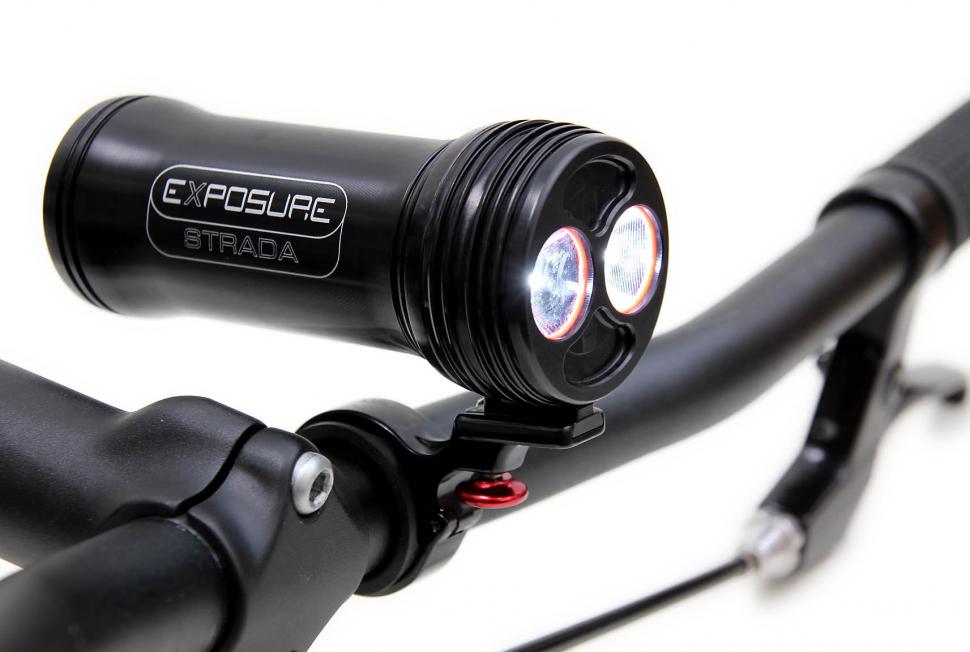 9
10
Powerful LED with good peripheral illumination in a neat, strong unit. A pricey option, but with a performance that justifies the expense
Weight:
245g
Contact:
www.exposurelights.com
How we test

The Exposure Strada is a serious light for road riding, putting in a strong performance across the board. It's a serious price too, but one that's justified if you do a lot of road riding out beyond the street lights.

The main beam is among the best we've tested. The centre of the beam isn't the very brightest so you don't get as much punch straight ahead as you do with Lumicycle's LED4si, for example, but you still get plenty of illumination. I could see far enough ahead that I was happy to head downhill at 35mph on unlit roads with the Strada on board. I never once during testing felt like I needed to slow down because I couldn't see the road ahead well enough.

The other main feature of the beam is that you get a good spread of light for useful peripheral illumination. In other words, the light you get doesn't drop off steeply towards the sides of the beam. If you're in town that's probably not particularly handy but if you ride on smaller roads and lanes at night it's a real bonus (the Lumicycle LED 3Si looks like it has similar levels of penetration but maybe not quite as much peripheral oomph). It means you can see potential hazards that aren't right ahead of you - sticks in the road, overhanging foliage, small woodland mammals in the verge just about to commit harikiri under your front wheel... It's a jungle out there.

Increased peripheral vision also makes a big difference when you're cornering. It means you can see where you're going to go even when you're not yet heading directly for that point. Make sense? Basically, you can see further around the corner with the Strada than you can with most other lights I've tested you can tackle the bends more safely. Forewarned is forearmed.

The Strada has two different settings: there's the high setting which has a run time of about 3hrs and the dip setting which runs for around 8hrs. The dip beam is less intense generally, but especially in the centre. It's still strong enough to see your way on unlit roads; you just don't get as much confidence when you're riding fast.

Switching between the modes is a matter of pushing a button on the back of the lamp body. That button is illuminated and easy to spot although it's situated right next to the raised charge port that comes with a silicone cover over the top. I sometimes found it difficult to get my thumb on the right thing with gloved hands. No worries, though - Exposure also provide a remote switch. It's a little button that straps to your bars; you can sit it right next to a gear shifter and then you don't need to move your hand to control the light.

Actually, there is a third flashing setting too and it'll keep going in that mode for days on end. I guess you might use that if you're about to run out of charge.

The battery is contained within the CNC-machined aluminium light unit which is tough enough to handle all kinds of use and abuse. I've been using Exposure's MaXx-D light for maybe three years and it has a similar (though larger) body. I've dropped it and accidentally whacked it a few times but it's still running absolutely fine, so I'm guessing durability on the Strada will be equally good. And although it's not 100% waterproof, it's fair to say that it's highly water resistant. I've ridden in the rain with the MaXx-D a load of times and water has never got in.

The Strada sits on a quick release handlebar bracket that comes with a spacer and a silicone strip to fit various bar sizes. You can remove and remount the light unit in no time although you can't really alter the direction of the beam while you're on the road. Well, you can tighten the bracket just to the point that you can still twist it on the bar slightly but that's probably not the best idea. You're better off just setting the right direction and leaving it.

The illuminated button on the back acts as a fuel gauge - it glows different colours to indicate how much juice is left in the tank. The Strada automatically shifts to its low setting when there's only 5% charge remaining, then it dims gradually over the next hour so you've got a fighting chance of getting home before it runs out.

Recharging takes around 8hrs from empty. You can recharge from the mains or from anything with a USB port, from your car if you buy Exposure's In-Car Charger (£20), or you can plug in one of Exposure's Piggy Back batteries that start at £40.

Bear in mind that although Exposure have designed this as a road light, it does not conform to BS6102/3 standards - in common with many other very good lights out there. That means that to be legal you should use it alongside a cheap light that does fulfill the requirements.

The Strada comes with a two-year warranty.

Powerful LED with good peripheral illumination in a neat, strong unit. A pricey option, but with a performance that justifies the expense

Exposure say, "The Strada feels most at home on the road. Designed specifically for road riding, the Strada has a dipped and main beam function. Coupled with a remote switch, the Strada's mode can be changed safely without taking your hands off the bars."

It offers about as much illumination as you could need for riding on unlit roads at night.

The Strada features what Exposure call Intelligent Thermal Management. That is, "New patented technology combats the loss in efficiency of LEDs at elevated temperatures, maintaining optimum output keeping you shining 'Brighter for Longer'."

It's a really solid light. The lamp casing is CNC-machined aerospace grade aluminium. You'd have to be really clumsy or unlucky to damage this one

It's super-easy to use. You clamp the handlebar bracket on with one Allen bolt and the lamp unit just pushes in place. You switch between the high beam and the dip beam with the button on the back, or you plug in the remote switch. It could hardly be easier.

The quick release handlebar bracket takes a minute or two to fix to you bar. Then removing and reattaching the light unit takes no time at all. It's a very simple job.

You're very, very unlikely to get any water in here. There's even a silicone cover over the charge port.

You get about 3hrs on the high beam. Not many people are going to ride for longer than that on the road at night. If you do for any reason, switch to the dip beam and you'll get about 8hrs. It recharges from flat in about 8hrs, so stick it on overnight and it's good to go in the morning

£245 is a lot to spend on a bike light, clearly, but you're getting a very high performance and it should last years.

There's no doubt it's a top-level light for road riding.

The beam pattern and the fact that the battery is contained in the light unit. It means there's no clutter on the bike, and no wires.

Would you consider buying the light? Yes, I probably would