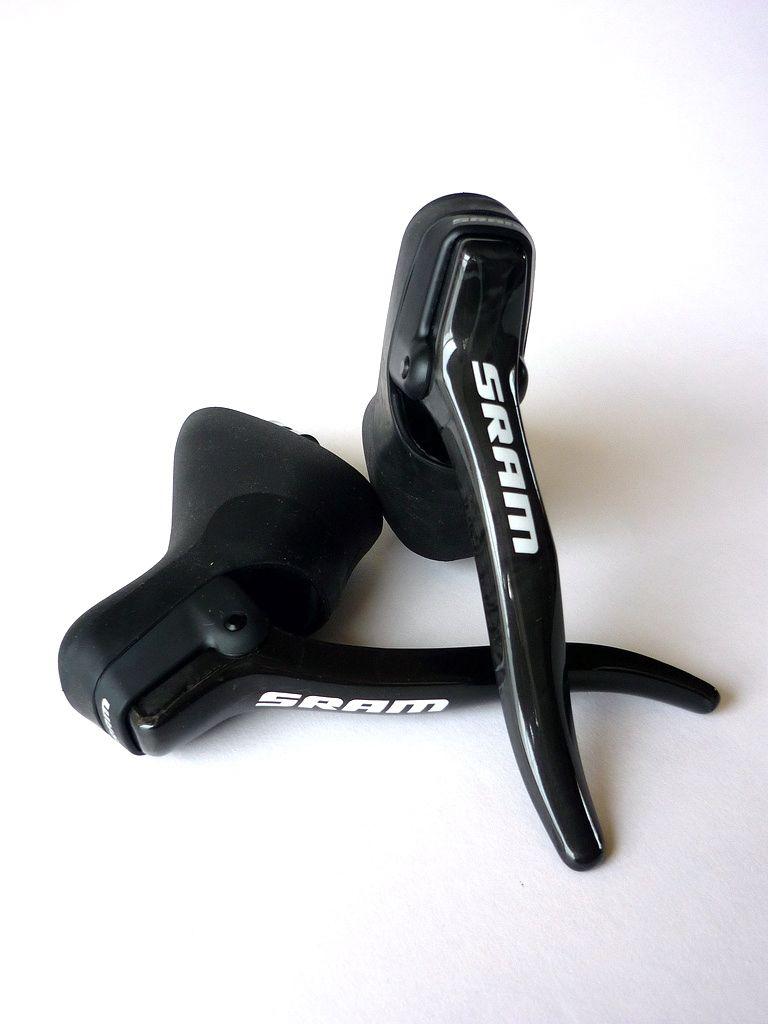 8
10
Very lovely, but SRAM's alloy equivalents are half the price
Weight:
247g
Contact:
www.saddleback.co.uk
How we test

SRAM's S900 brake lever is something a bit different. It's not often you get to see a brake-only lever for a road bike these days, they're all modern fancy units filled with all sorts of gear-changing trickery, but there's a small but significant army of fixed (the ones that use brakes at least), one-gear and (even if SRAM label these as a 'singlespeed' lever) a bunch of bike riders that use down-tube and bar-end shifters that don't need or want a brake-and-gear combo.

SRAM pander to the thigh-rubbers and the weight-weenies of that market with these stealthy swanky composite goodies. Essentially a SRAM DoubleTap lever with all the geary internal gubbins removed the S900's are designed to work with both road calipers and cantilevers. Available singly at £54.99 or as a pair for a cool £101.

If you've used SRAM levers before you'll be familiar the shape of the hoods, but if you haven't it's similar to the square and flat-topped of old 10spd Campagnolo but with the slightly sharper edges of old Shimano, and not to dissimilar to the new Shimano hoods, anyway, there were no issues with comfort on test paws, and no blisters or sore bits even when bounced around for long rides off-road on the 'cross bike.

The hoods angle subtly to the outside when they reach the, erm, horn and the lever kinks out further giving the front of the bike a certain jug-eared look but in operation the sticky-outness works surprisingly well. Not having the brake lever pointing straight down as is the norm initially feels a little odd, but the angled lever soon settles more naturally to the hand. Both whilst on the hoods and in the drops the fingers don't have to wrap as far round the front to operate the lever, this is a rather nice action and a boon for smaller handed riders whose digits can sometimes be stretched onto standard levers. To help stumpy phalanges matters further a 3mm allen key hides under the hood rubber to adjust the reach of the lever to the bar. Feel at the lever would make Goldilocks proud, not too baggy, nor too snappy, in fact just right, but there's no return spring which might be a problem for those that prefer gritty cables.

One of the side effects of having all the gear-offal removed to make this a cheerfully light brake-only lever is that the body is a hollow empty shell free of substance that's happy to flex when hauling on the hoods, noticeable even to those not particularly strong in the hauling department, and this repeated play in the lever caused the clamp to be gently wiggled loose so that the bolt had to be tightened up a good full turn after a month or so of use. Since then it's been trouble free though it might need a regular eye kept on it. Another aspect of the gear guts removal is the gaping hole in the body where a DoubleTap shifter should be poking out, initial worry was that this open wound would let all sorts of gunk and kipple in, especially if used on a cyclo-cross bike where a single chainring is often run leading to a lever being gear redundant or on a trendy town bike where gutter spray and tramp's juice could get sucked in. But these fears have been totally unfounded. And while on the caveats, beware if you plan on using these levers on brakes with no cable release lever on the body, the SRAMs have no brake release spigotti on the body (like Campag brakes have) so there's no way of releasing a tight brake for quick wheel removal.

Considerably pricier than the few still quite-nice-lever only offerings and a bit cheaper than the lottery-win only Campag units the SRAM-S900s are a light, ergonomic and comfortable brake lever whose carbon blade gives them a subtle air of high-class trinketry, their lightweight induced flex might be an issue to muscly riders though and the lack of a release system could be a niggle to others. If these are a little too aristocratic for your build then the blue-collar SRAM S500 is the alloy levered variant that pleases the wallet at about half the price.

SRAM enthuse that the 900 is the singlespeeder's choice, the perfect match for riders needing only a single gear. With a unidirectional carbon lever it's fully compatible with SRAM Red, Force and Rival brake calipers.

It's actually more versatile than that, being useful to anyone that doesn't need or want gear-changing machinery in their brake levers, and they will work with other makes of road caliper or cantilever. They don't mention the price.

The levers worked perfectly well as brake levers that didn't need to change gear as well.

The comfy shape of the hoods and lever angle, the light weight, the carbony.

That slowly unwinding clamp bolt, and the lack of a brake release spigotti was a minor annoyance.

Would you consider buying the product? They are lovely but to be fair I'd probably plump for the cheaper alloy versions

I usually ride: It varies as to the season.  My best bike is: The one I\'m on at the time 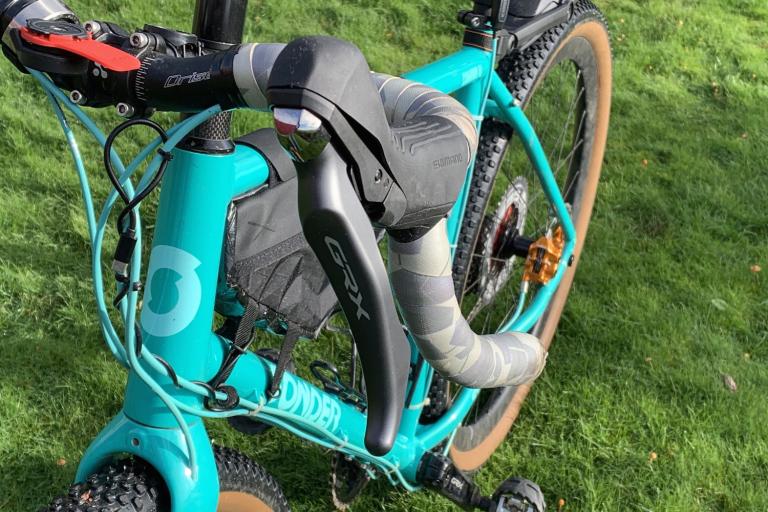 The best way to control your drop-bar dropper, bar none 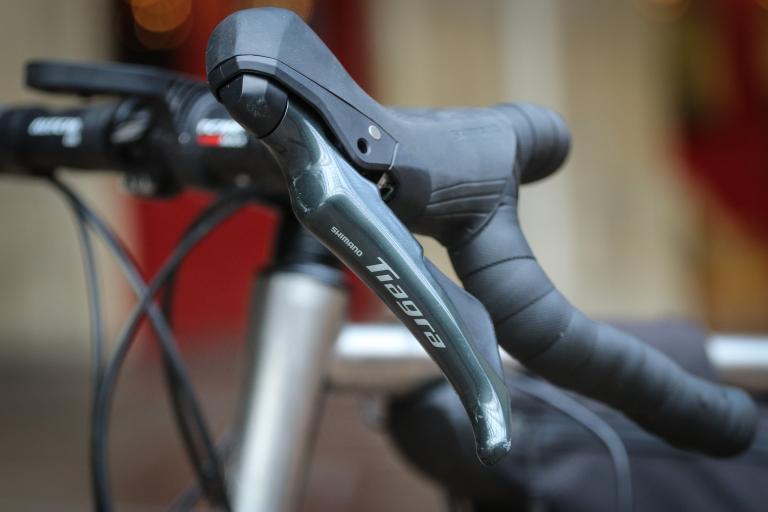 Great performance for braking and shifting; perfect for your winter bike or commuter 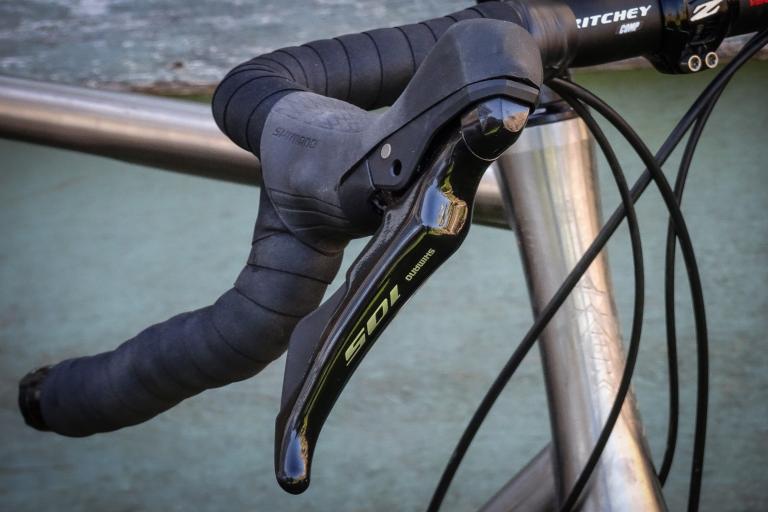 A big step forward from the previous version, with excellent performance and 105 looks 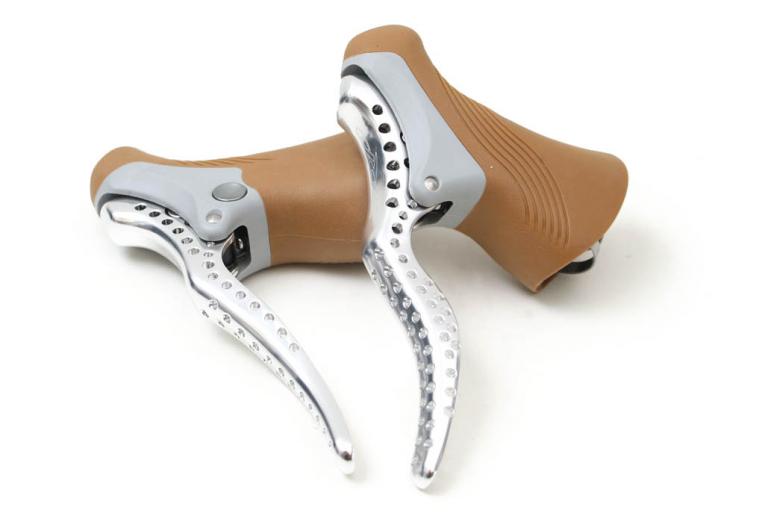 Top quality brake lever at a suitably top quality price, an extravagence maybe but a real treat for any old style steed