Goodyear's Transit Speed S3 tyres are a sensible choice for your round-town bike, with decent levels of grip and puncture resistance and handy reflective sidewalls for night-time visibility.

It has to be admitted that it's hard to get excited about utility tyres, but Goodyear has done a good job with the Transit Speeds (or to be precise Rubber Kinetics, which licenses the Goodyear name for bicycle tyres, has done said good job).

The road and path surfaces I ride to and from work every day have been deeply crappy in the last couple of weeks. Rain and falling leaves have made them, erm, interesting, even for someone with a couple of decades of mountain biking that's left me reasonably comfortable on less-grippy stuff. The Transit Speeds have been surefooted through it all. I haven't taken any particular risks, but in those moments where a patch of path-edge gack has been unavoidable, they've been steady.

I'm a big fan of reflective sidewalls on tyres, because a pair of hoops in the headlights says 'bike!' really strongly. Yes, your driver has to be actually looking for reflectives to do any good, but I've no issue with giving drivers who are paying attention a bit of help seeing me. It's ones glued to their phones who can get in the sea. 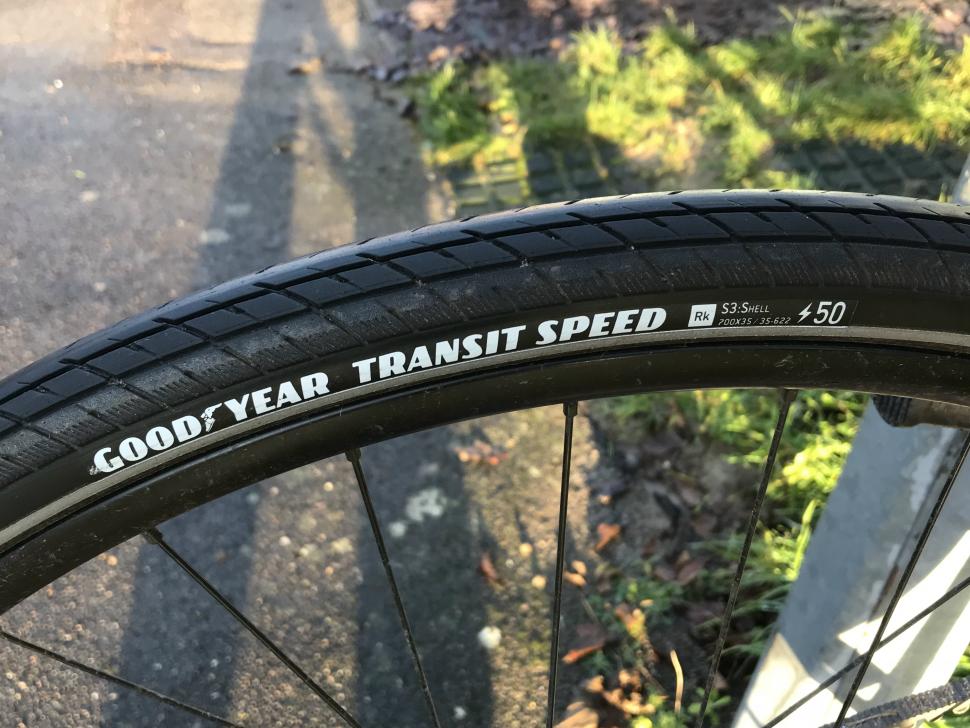 If I mention that I haven't had any punctures, that'll draw the attention of the Puncture Gremlins and I'll get one on the way home, so I won't, especially as a few weeks' commuting is too little to really draw a conclusion. But I will mention that the Transit Speed's S3.Shell puncture prevention – a 3mm band of rubber between tread and carcass – is roughly equivalent to that of the doyen of commuting tyres, the Schwalbe Marathon, but not quite as thick as the Marathon Plus's 5mm SmartGuard rubber layer or Goodyear's own 5mm-thick S5.Shell, which is part of the beefiest version of the Transit Speed.

Those are the tyres you'd go for if puncture prevention was your only criterion for choosing a tyre, but the 3mm layer here is going to ward off most shards and flints without making the tyre ridiculously slow and heavy.

Because, if there's one thing the Transit Speed S3 tyres are not, it's fast. They're noticeably slower than the Schwalbe Marathon Supremes that my town bike previously wore. That's not very surprising, as Marathon Supremes are among the fastest tyres that still offer a good level of puncture resistance. That 3mm of aramid-infused rubber under the tread of the Transit Speeds makes them significantly more resistant to punctures, but unavoidably stiffens the carcass where it has to flex to meet the road, and that pushes up the rolling resistance. 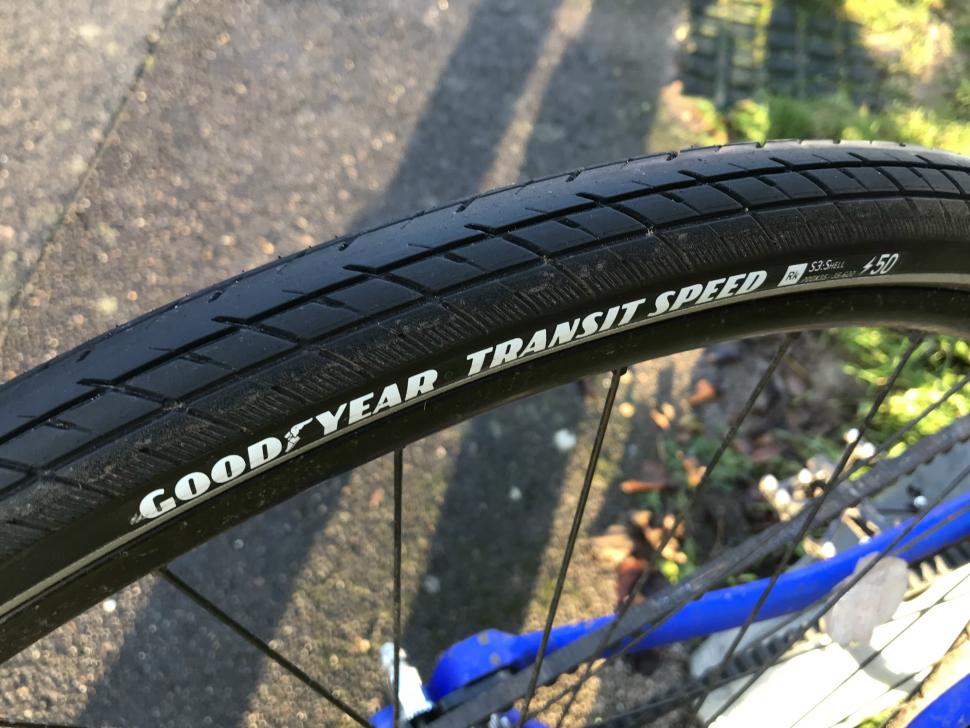 For round-town riding and commuting up to say 10km or so, this doesn't matter. You might be a bit slower getting to work, but that's a reasonable trade-off against the sheer inconvenience of having to change a tube in the rain halfway to work, and getting your hands covered in that lovely mixture of diesel and car tyre particulates that inevitably coats the tyres of urban bikes.

On the other hand, the Transit Speed S3's stiff sidewalls and this under-tread layer do combine to make the ride a bit buzzier than you get with more supple tyres. If your town bike can accommodate them, you might want to go for the 40mm Transit Speed instead of this 35mm version so you can compensate by running them a bit softer.

Overall, the Goodyear Transit Speed S3s are a solid choice as round-town rubber. They don't excel in any particular department, but they've a pleasing balance of features.

As the 'urban' designation suggests, this is a tyre aimed at round-town riders who use their bikes for transportation, commuting, shopping and the like. It's also rated for e-bike use up to 50km/h so it'll work with regular 25km/h e-bikes and 45km/h speed-pedelecs, though the regulations make riding one of those legally in the UK tricky, to say the least.

Goodyear says: "At home flowing through urban centers and along bike paths, the Transit Speed is a fast-rolling urban tire combining confidence-inspiring handling with great durability. The Transit Speed range comes equipped with 5mm reflective sidewall stripes to enhance visibility. Meeting the ECE-R75 requirements for use with modern eBikes, the Transit Speed delivers both performance and durability."

There are three versions of the Goodyear Transit Speed, each available in 35mm, 40mm and 50mm widths. This is the S3:Shell version, which Goodyear says has Aramid Infused Sub-Tread. Aramids are the polymers that include Kevlar, the bullet-proof-vest material, so the idea is to put a thick puncture-resistant layer under the tread.

As you'd expect from a round-town tyre, there's a reflective band on the sidewalls for visibility in car headlights.

Also available, a Secure version with the S5:Shell detailed below and reinforced sidewalls, and a tubeless version, both with reflective sidewalls.

Found on our Transit range of tires, our Shell Protection is available in 1, 3 and 5mm depths. Our proprietary blend of low hysteresis, aramid-infused rubber.

S1:Shell – 1mm layer below the tread.

S3:Shell – 3mm layer below the tread.

S5:Shell – 5mm layer below the tread.

Tidily moulded, nothing much more to say one way or the other.

Good grip and puncture resistance, but not fast.

Well. It grips the road, wards off flats and isn't fazed by a bit of slippery crud.

Would you consider buying the product? No, I'll stick with Schwalbe Marathon Supremes for their more supple feel.

The Goodyear Transit Speed S3s are simply good round-town tyres. They're not extraordinary in any department, but they have no serious flaws either, making them a solid 3.5/5. 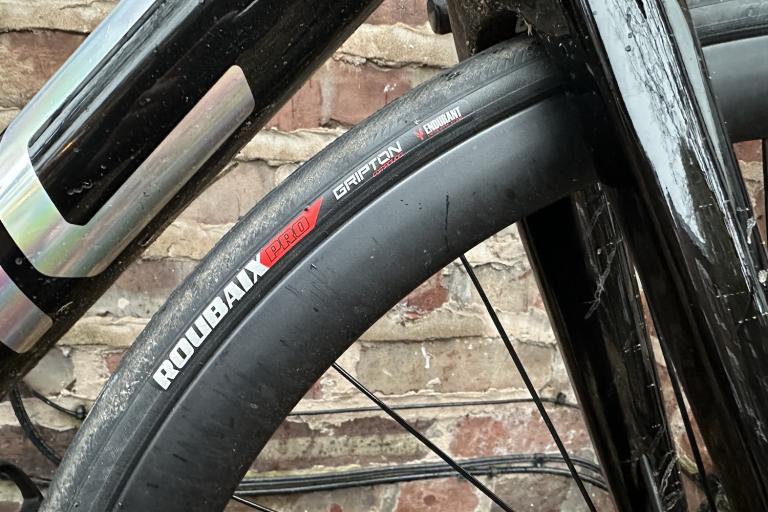 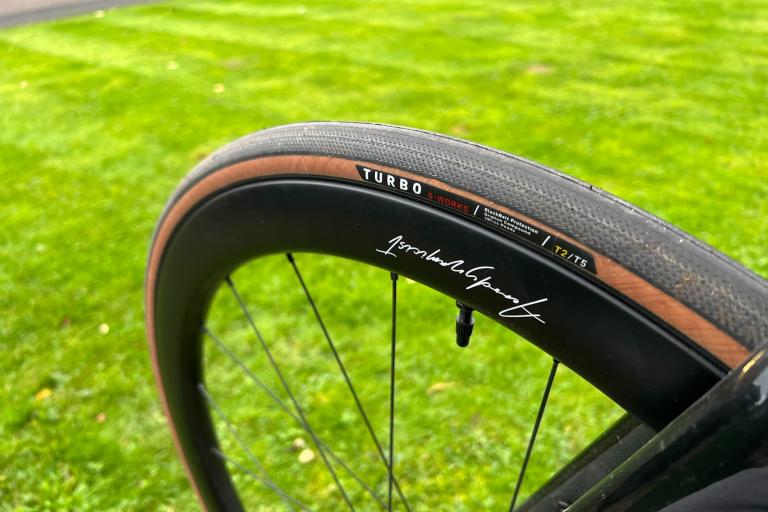 Fast, grippy, easy to set up, and a fairly good price too 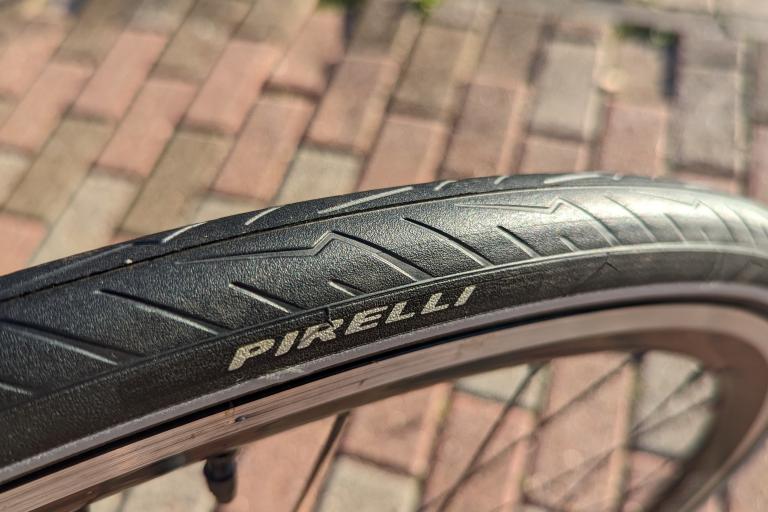 High-quality tyre for pretty much all weather conditions, keeping the puncture fairy away while rolling quickly 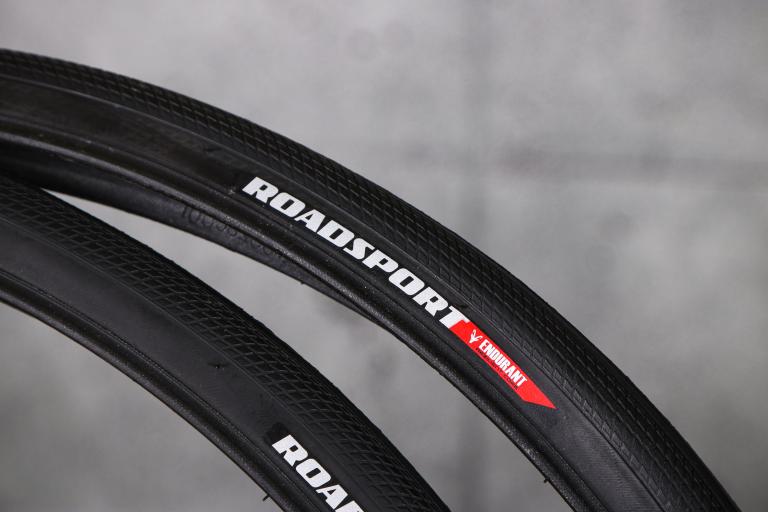 Lively and compliant budget tyre, but puncture resistance is not the best