7
10
Good beam pattern and solid design, but short battery life and a bit pricey against rivals
Weight:
203g
Contact:
www.zyrofisher.co.uk
How we test

Cateye has been in the bike lighting game a long time and the AMPP 1100 is one of its latest additions, a 1,100-lumen light that has a decent wide beam pattern, is solidly made and is simple to use. It's not the cheapest, though, and others delivery better battery life.

While I was testing the AMPP 1100, George was out and about getting to grips with the AMPP 800 and the points he made about it in his review here pretty much sum up my thoughts about the AMPP 1100, you just have a bit more light to chuck about.

First, I like the beam pattern. It's not necessarily that road-specific but it is wider and flatter than many, with less of a spotlight in the centre.

Angled down slightly it's unobtrusive to oncoming motorists if you're sensible with the mode settings, and illuminates a large spread of road in front of you, picking up the verges and drains in your peripherals. It has a bright white colour to the beam as well, which gives great clarity.

Two LEDs are used to achieve this pattern and Cateye's OptiCube lens technology, and its design also allows a decent amount of side illumination. How much it stands out when your arms are shielding it on the hoods is another matter, but it's better than nothing. 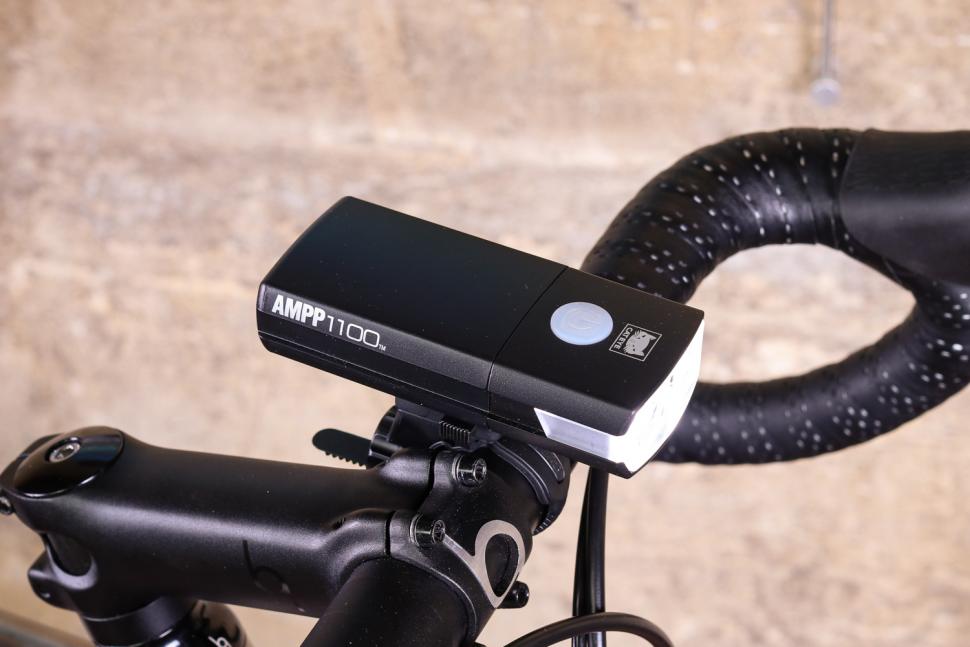 Those are pretty good outputs, but the battery life isn't exactly market leading. Take the Moon Meteor Storm Dual Front Light I've just finished reviewing: using both LEDs for 1,300 lumens it would run for 2hrs, and one LED at 800 lumens would achieve 3hrs. That's an hour longer than the Cateye delivers in its Middle mode at the same 800 lumens. It's not like the Moon has a massive battery or anything, as the weight difference between the two is just 4g.

The AMPP 1100's flashing modes are a daytime flash which keeps the LEDs on at 400 lumens permanently with a 1,100-lumen pulse, which will certainly get you noticed. It'll knock that out 6.5hrs, while the standard 200-lumen night flash will last for 50hrs.

Changing between the modes just requires a click of the power button but Cateye has done that naughty thing where if you are in Low and want to go back to Middle you have to scroll through the two disco modes to get there. Something that frustrates me something chronic when it comes to light design!

The only saving grace is that if you are in any mode you can double click to jump to High mode, and when you give it another click to return to your previous mode. With this in mind it is possible to use Low as a dipped beam and High as your full beam without having to scroll through the flashing modes or use the Middle and High modes.

The power button (it's a press and hold jobby to turn the light on/off, by the way) is also a battery indicator. Blue means above 50%, yellow 30-50% and red at less than 30%. Cateye claims that it can be charged/discharged 300 times before the rated capacity drops to 70%, which doesn't sound too bad. Even the most hardened commuter should get a good few years out of it.

The Cateye stuck pretty close to its quoted burn times, and a full recharge is quick enough at just over 3hrs via the mains or about 5hrs from a PC, it all depends really on the output.

The charge point is at the bottom of the light, hidden behind a rubber cover which does a good job of keeping out the elements. Plenty of wet rides saw no issues and even a blast from the power shower saw no water ingress. The cover is a snug fit, too, so there is no worry of it vibrating open. 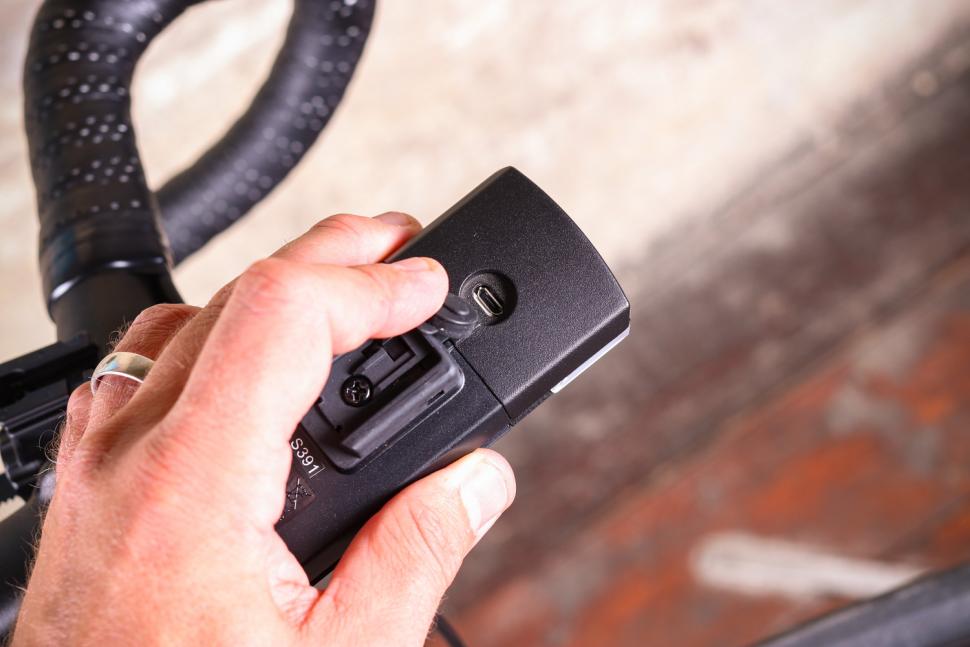 In fact, the Cateye is a quality bit of kit throughout. It uses aluminium alloy in its construction, unlike many other brands which incorporate a bit of plastic. If you drop this or crash, you won't do much damage.

The bracket is tried and tested. Its design has been used for years on Cateye's lights and it works, keeping the light securely in position on even the roughest of roads. Attaching and removing the light is just a button push away so it takes seconds. 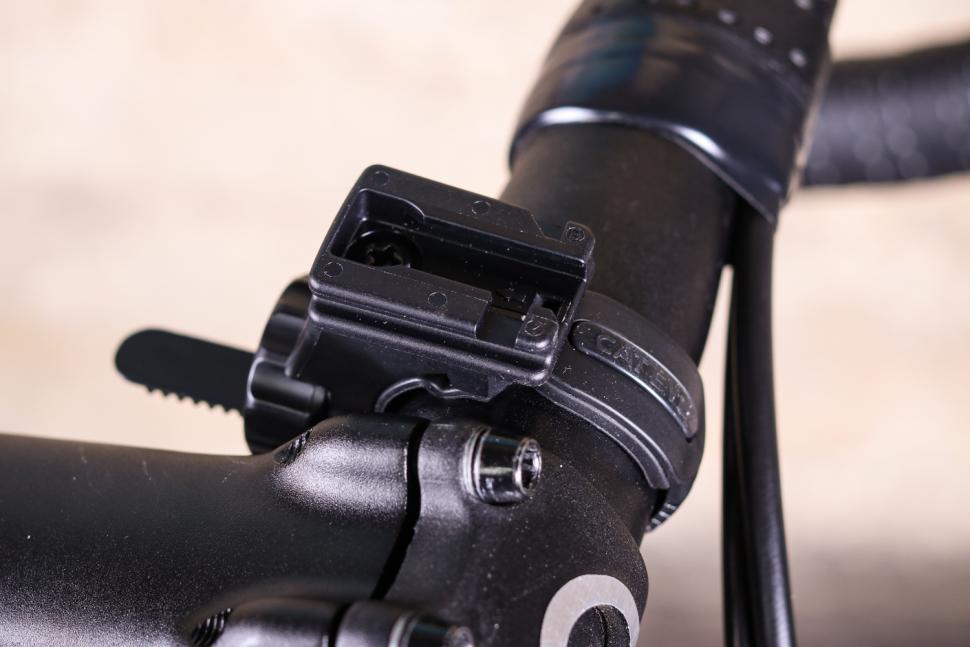 This new AMPP 1100 has an rrp of £109.99 which in the grand scheme isn't a massive output for a light of this quality. That Moon Meteor I mentioned up the top, though, is just £89.99. Twenty quid less but with an extra 200 lumens and much longer battery life. Plus it gets a remote control and a helmet mount.

The AMPP 1100 is the same price as the Knog PWR Trail front light which has 1,000 lumens as its max output. It does convert into a power bank, though, and you can adjust beam patterns and modes by using the Knog app.

Overall, the AMPP 1100 is a well built light and it's easy to use. The downsides are that its price/performance ratio is a little off and that is tough to swallow against some of the opposition.

Good beam pattern and solid design, but short battery life and a bit pricey against rivals

Cateye says, "AMPP1100 uses a twin-LED design with OptiCube™ lens technology, spreading a wide and even beam across whatever the terrain throws at you."

Turns on High mode with double-click of power button

Other companies are delivering longer burn times but the Cateye did achieve what was quoted in both length and recharge time.

If you are riding for less than two hours at a time it offers good performance from its LEDs.

There are a lot of lights like the Moon I've mentioned or brands like ETC which are offering more power and longer running times for the money.

Would you consider buying the light? No, not without a decent discount.

Would you recommend the light to a friend? I'd mention it along with others.

A decent all-round package but it just doesn't quite hit the mark against the cheaper/more powerful competition.