7
10
A good light at a decent price that pumps out enough lumens for most riding situations
Weight:
129g
Contact:
www.moorelarge.co.uk
How we test

The Xeccon Link 600 front light is powerful enough for riding on unlit roads, with decent battery life, easy mounting, and simple operation. It also has a clever mode that automatically adjusts output so as not to dazzle oncoming traffic.

It's a dual-LED USB-powered light that, as the name suggests, boasts a maximum output of 600 lumens, which is more than adequate for most situations. I used it without a problem on unlit country roads, though I would probably want something with a little more power for trail or gravel riding.

The light has four modes: constant high and low, a very quick strobe, and automatic. The first three are simple enough, while automatic is of particular interest, adjusting the output based on lighting conditions.

It's designed to stop you dazzling oncoming drivers or cyclists by reducing the light output then increasing it once they've passed. It certainly seems to work, with a noticeable lag when going from lighter conditions to darker, and could be a real boon, particularly on cycle paths.

Connecting the light to the bike is done through a really simple mount, which is essentially a plastic bracket held in place on the bar with a laddered rubber band. The light itself is on the bulky side, coming in at 80mm long and 53mm wide, but despite its size the mount manages to keep the light in place securely. You can also remove the light unit quickly without the mount itself, pressing a button on the side of the mount which lets you slide the light unit off. The mount can also rotate 360 degrees, which means the light can be mounted in a variety of positions. 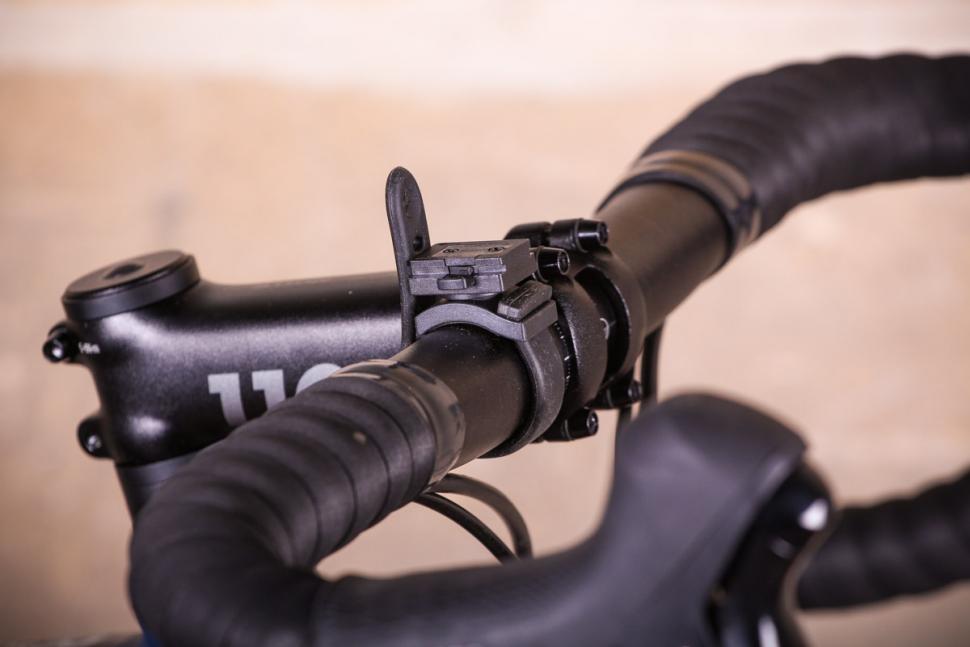 Working the light is slightly more complex than some, with three different press patterns to get to different modes. The high, medium and automatic modes are simply toggled through by pressing the single button, but getting to strobe requires a three-second push, which seems a bit more complex than it needs to be. It would be simpler to just include it within the single press cycle.

Turning the light on and off is done by holding the button down for two seconds.

As ever, battery life is dependent on which mode you are using. I found that low tended to last 7-8 hours, not the 10 hours claimed, while automatic was slightly less and high would run out after about 2 hours. That isn't too bad in terms of holding charge, but certainly not the best I've found in similar-powered lights.

Charging is via a Micro-USB cable which plugs into a slot in the rear of the light, and it takes quite a while to charge, around 5 hours. Xeccon has also included a battery indicator within the button: green for okay, red when the light needs charging.

An RRP of £43.99 is pretty good for a 600-lumen light, although if you shop around you can find it for less. The NiteRider Swift 500 is £8 cheaper, but also 100 lumens less powerful, while the Kryptonite Street F500 (full review to come) is £1 more than the Xeccon.

Overall, I'd say the Xeccon is a pretty good light, with a couple of niggles. It pumps out a decent amount of light, the run-times are adequate for most uses, and the mounting is really good, but it does take quite a time to charge and it's fairly large on the handlebar.

It's a commuter light with an automatic adjustment setting and decent lumen output. The automatic sensor seems to work well and it pumps out enough light for most riding situations.

Seems like a well-made light and still working after a couple of drops and use in heavy rain.

It isn't too complicated, although it would be good to include the strobe option within the single press cycle.

No complaints. I used it in torrential rain without any adverse consequences.

It holds its charge for a decent amount of time for reasonable-length commutes, but it would be nice to a have a shorter charge time than 5 hours.

Pumps out a decent amount of light for most riding situations, relatively easy to use, and doesn't need to be charged too frequently.

Dropped it a couple of times (the joys of reviewing the light alongside lobster claw gloves) and didn't leave a mark on it.

It's fairly heavy, but not likely to do too much damage on a climb.

This is a good price for a well-made 600-lumen light, even better if you can find it cheaper online.

Very well. It does everything it needs to, pumping out enough light for most situations, easy to mount, and simple to use.

The mounting system is simple but effective and allows for a diverse range of options.

Charging time is a bit long, and I'd like a simpler way to get to the strobe option.

It's a robust, well-made and bright enough light for most situations, at a price that doesn't break the bank.