Queens of Pain by Isabel Best

8
10
A welcome focus on the outstanding cycling achievements of some inspiring women
Weight:
680g
Contact:
www.rapha.cc
How we test

Queens of pain highlights some of the impressive achievements by women on bikes during the last century: a few are already well known, many are not, but all deserve to be recognised. There is ample evidence here that 'parity with men's racing remains a distant goal but there will be no shortage of available heroines the closer it gets'.

Books about 'the best' or 'the greatest' cyclists of all time appear fairly regularly, each with its own criteria for inclusion. To the best of my knowledge no one has produced such a book devoted entirely to female cyclists, which does seem like an obvious gap in the market.

With discussions on the equality of the sexes within cycling being so topical, this is surely a good time to fill that gap and remind us of the 'legends and rebels' in women's cycling – or, as is more likely, to introduce you to a world of impressive achievements by names that may be new to you.

Given that Rapha Editions had already used the title Kings of pain in a previous book, Queens of pain seems like a logical choice for this one; it is certainly going to make internet searches for 'queens of pain' a less risky proposition. 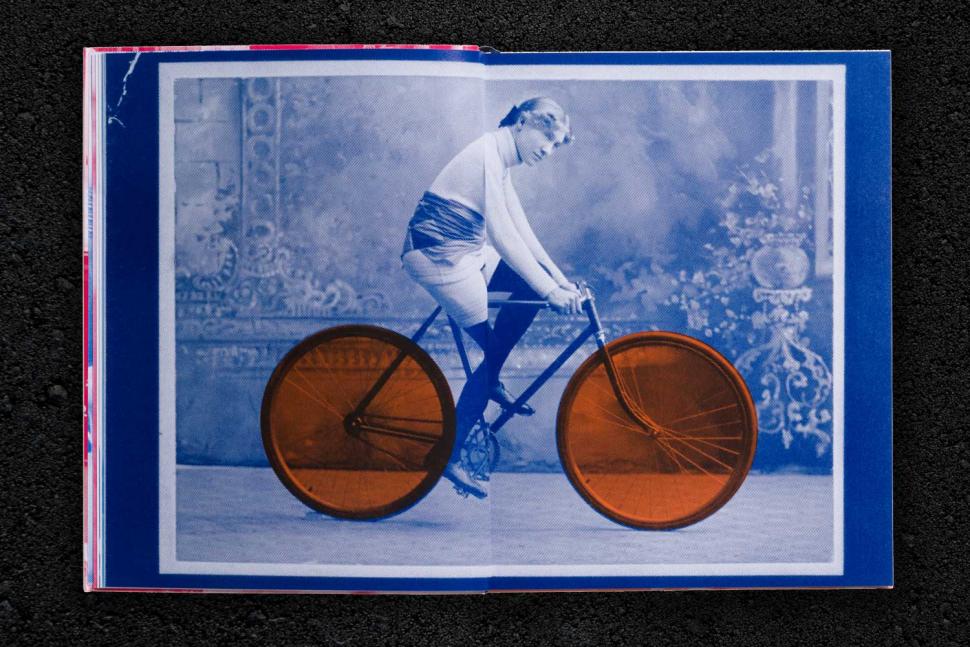 The author Isabel Best is not a specialist cycling journalist, but she regularly writes about cycling and clearly knows the sport. She 'scoured original newspaper archives, spent months tracking down descendants and met with riders in her efforts to faithfully tell their stories'. The bibliography even includes a list of deceased riders' archives that she studied, and the current curator.

While the research may be thorough, has Best made the best choice of riders? Of the 25 on offer, there are some names that you would expect – but many more that were either new to me, or about whom I know very little: Hélène Dutrieux or Audrey McElmury, for example. However, when you read about their exploits, it's easy to appreciate why all of them are worthy of inclusion – and deserving of greater exposure. 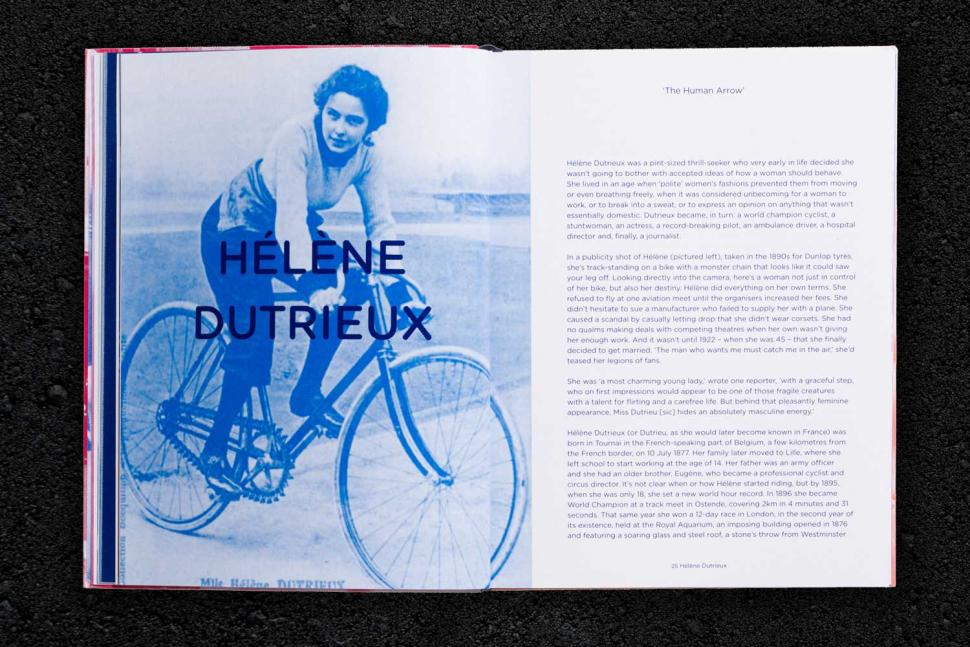 At first glance there do appear to be some notable omissions, such as Marianne Vos or Nicole Cooke: that is because 'this book finishes in the early 1990s, when women's cycling finally became a professional sport'.

If you compare Best's selection to the women chosen for another recent compendium, The Hardmen, then the only overlap is Beryl Burton; The Velominati do include two women that Best omits, Rebecca Twigg and Annie Londonderry – but that is primarily a reflection of their different focus.

A slightly older collection was Breakaway, and here there is agreement on Alfonsina Strada, Marguerite Wilson, Connie Carpenter-Phinney, Jeannie Longo – and of course Beryl Burton. Tessie Reynolds is the only one who made the cut for Breakaway, but not Queens.

> Buyer's Guide: 28 of the best books about cycling

It is no surprise that Beryl Burton is the only woman to appear in all three books: if you know anything of her achievements the only question is why she is not better known outside our sport. For me, much of her reputation comes from her performance in a 12-hour time trial in 1967: on the way to setting a record for the women's distance, she caught and passed the man who was busy setting the men's record. That's right: her record was three-quarters of a mile more than the new men's record – and it was only broken last year, 50 years later.

If you were asked to name the first British winner of the Tour de France, most people would say Sir Bradley Wiggins. However, Millie Robinson managed it in 1957 – sort of. The historic race was actually called the Tour de Normandie, but was billed as a Tour de France Féminine. It was 'only the second stage race for women ever to be held' – and Robinson had won the first one as well.

Throughout the book Best reminds us of the disparity in prize money – even when women are riding the same course. She talks of women winning 'pepper grinders, silk stockings, ironing boards, and if they got really lucky, a year's supply of detergent'. 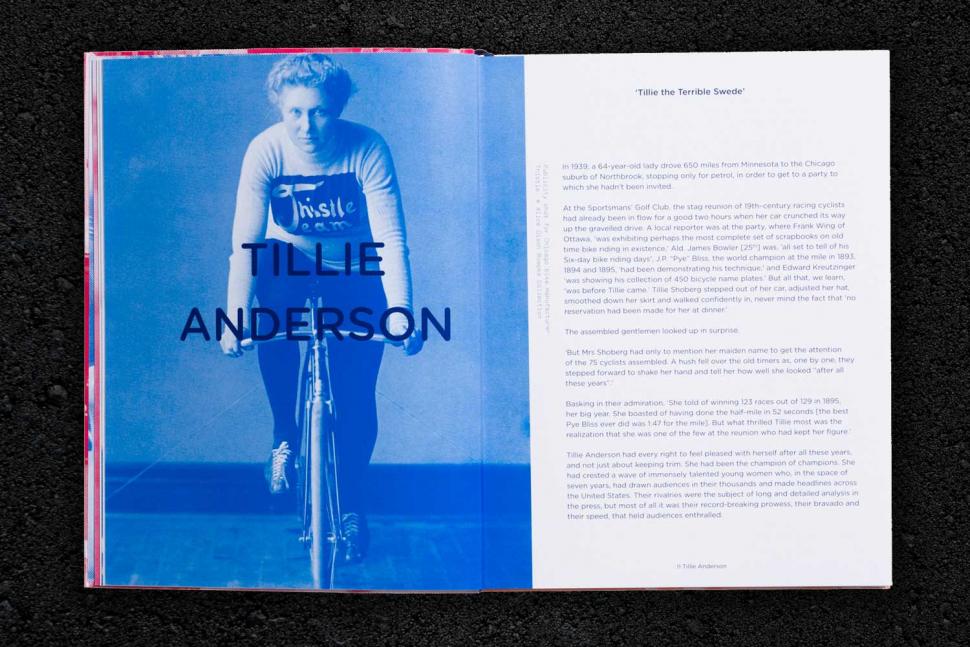 A good like-for-like comparison comes from the proper Tour de France Féminine, first run in 1984: 'Their stages featured the same roads and mountain passes as the men's race, only they would start out two hours earlier and cover shorter distances to comply with UCI regulations.'

The race was won by the American Marianne Martin, for which she received $1,000. That was a lot less than Laurent Fignon won for winning the men's event, but at least the women could take part in a serious race: today they are having to argue about whether races are too long, steep, or whatever, which seems like a step backwards.

You can see a few examples of the images from the book throughout this review; we are told that: 'The book is printed in five Pantone colours, rather than standard CMYK: the result offers especially vibrant colours and adds a unique consistency to the design and images.' 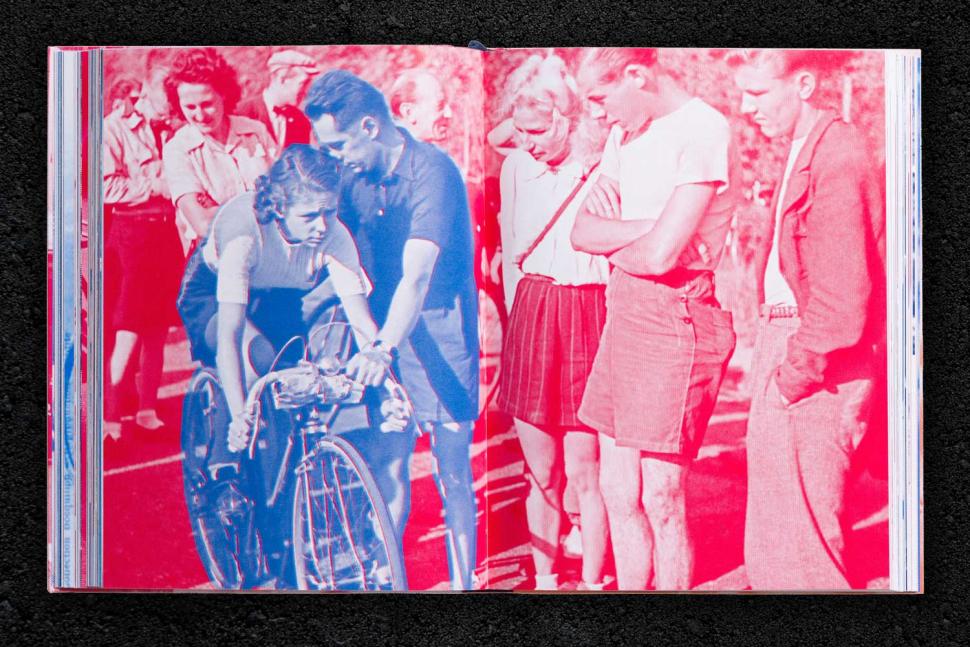 I felt that this special treatment could add a bit of interest to older black and white images, but didn't do anything to improve on later colour images – but maybe I am missing something. Anyway, I suspect that people will buy this book primarily for the writing, not the pictures, so it probably doesn't matter. In a further quirk, the front cover comes in a choice of three different pictures, each in a different colour.

A book such as this is a valuable addition to the genre, and its timely arrival should help to inform the various debates about women in the sport – and demonstrate that women's achievements in cycling have always been as impressive as those of the men – when they have the opportunity.

Make and model: Queens of Pain by Isabel Best

Queens of Pain is the remarkable and largely unknown tale of women's cycle racing from the 1890's to the 1990's. From the fin-de-siècle velodromes of North America to the glamour and chaos of the first women's Tour de France, Queens of Pain offers a sweeping panorama of female racing history. Told through the lives of the great champions, its heroines include stunt women and speed skaters, young mothers and teenage tearaways, shop assistants and coal-delivery girls. When prejudice and officialdom denied them one stage they found another: from six-day track racing to epic place to place records, from 12-hour time trials to unofficial road races. The greatly expanded women's racing scene of today is the direct legacy of these pioneering riders whose stories form an unbroken thread since the invention of the bicycle.

£25 is a lot for a medium-sized non-hardback, and you will be unlikely to find much of a discount – but it has a real feel of quality.

Did exactly as promised.

An important subject, and good timing.

The treatment of the pictures.

This book does everything that you would expect from a good Rapha Editions publication – so as always, if it is a subject matter that you like then you are unlikely to find a better written, more lavishly produced, and thoroughly researched tome.