The Hardmen - Legends of the Cycling Gods

The Hardmen - Legends of the Cycling Gods by The Velominati

7
10
An introduction to some of the events and riders that have made a lasting impression on the Velominati
Weight:
200g
Contact:
profilebooks.com
How we test

You may be familiar with The Rules, a largely irreverent look at 'what makes ours such a special sport' by The Velominati, also known as 'The keepers of the cog'. Now they are back with this new book, The Hardmen – Legends of the Cycling Gods. In it they focus on a few riders who you know would not only conform to The Rules, but are a large part of why the Velominati created The Rules in the first place.

In some ways, The Hardmen is like a supporting volume to The Rules, helping to put them into context and showing why the Velominati think like they do.

The Hardmen selects 36 of the hardest men (and women) from cycling and explains why he (or she) deserves the title; actually it is 35, plus the entire Mapei team of the 1990s. However, rather than try to cover everything he (or she, or it) achieved, the Velominati limit themselves to just that one defining moment when these 'cycling gods' implemented Rule #5* better than anyone else – except in the case of Eddy Merckx and Sean Kelly, when they had to allow two such moments.

A Hardman is one who will 'relish a good fight and never give up'. It will always be a matter of opinion as to who should be included, but eventually the authors decided to just 'go with our favourite stories'; more controversially they 'certainly didn't worry about who was or wasn't allegedly doping'. 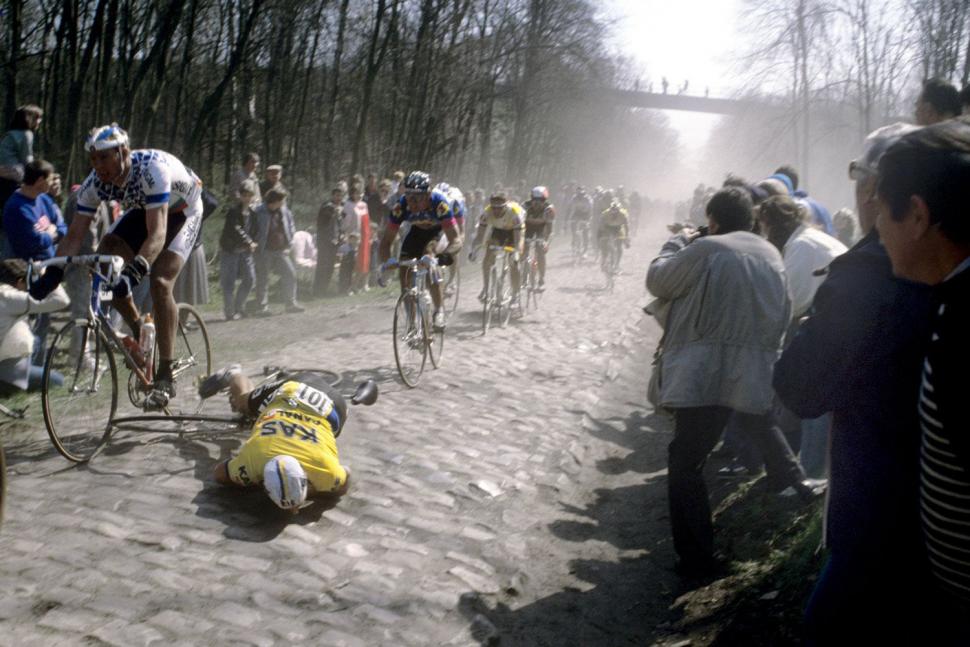 The selection is heavily biased towards those cyclists whose legendary status was formed at the same time as the Velominati started to follow the sport, which is to say from the 1970s onwards. It looks like Geraint Thomas is trying get himself included on any future list, carrying on after sustaining injuries in the 2013 Tour and in the Giro – at least for a few days.

There is one rider who we have to use as an example from the book: Eddy Merckx, 'The Prophet'. His first entry is his successful attempt on the Hour record: 'He later said the effort took a year off his career; I'm only glad it was from the tail end and not the front end or middle bit.' The second example comes from the Liège-Bastogne-Liège race in 1971, where Merckx voluntarily rode the 100km to the start of the race in rain and snow, before going on to win the race the following day in similar conditions.

Perhaps surprisingly, Greg LeMond (or LeMan) does not make it into the list of Hardmen, despite being referred to several times in The Rules: you just have to accept that the list is not trying to be complete or objective, but is simply a personal and subjective selection.

It is not long since we reviewed a similar style of book, Break Away: that was another compendium of cyclists, themed around 'the heroes and hellraisers' of the sport. Although each book is working to a different brief, if you look at those who appear in both books you end up with nine names that are likely to be on anyone's short list of legends: Bernard Hinault, Sean Kelly, Eddy Merckx, Francesco Moser, Marco Pantani and Roger de Vlaeminck on the male side – with Beryl Burton, Nicole Cooke and Marianne Vos on the female side.

As a bonus, there is a condensed version of The Rules in the back of the book – although there are now 95 of them, four more than when the original book was published. There is also an entertaining Glossary, but much like the Lexicon in The Rules, it is 'based similarly on our fancy and is therefore equally incomplete and contradictory'.

The Hardmen 'reminds us that suffering on a bike liberates us from our daily lives and that, in the words of Lance Armstrong, 'pain is temporary, quitting lasts forever'; proof that even assholes can be insightful'.

It can be good to hear (or be reminded) about some of the toughest competitors in our sport, but don't expect to find much that is new in here.

*For those who are not familiar with it, Rule #5 is succinct and to the point: Harden the f*ck up.

Make and model: The Hardmen - Legends of the Cycling Gods by The Velominati

The Hardmen: Legends of the Cycling Gods

It's time we all stopped whining and learned a thing or two from The Toughest Cyclists Ever. Including: Stephen Roche, whose cure for exhaustion was to go up a gear and fight harder, all the way to the ambulance. Eddy Merckx, who hurt himself so badly in breaking the Hour record that, he estimated, he shortened his career by a year. Beryl Burton, who crushed her (male) rival's morale with the offer of a piece of liquorice, before speeding past to victory. Nicole Cooke and Edwig Van Hooydonck, who rejected dope and became legends. The Hardmen tells the stories - the good bits, anyway - of the 40 most heroic Cyclists ever. Their bravery, their panache and their Perfect Amount of Dumb. It reminds us that suffering on a bike liberates us from our daily lives, and that, in the words of Lance Armstrong 'pain is temporary, quitting lasts forever'; proof that even assholes can be insightful.

It's interesting to find out about what appeals to the Velominati.

We now know that some of antics mentioned were achieved with the help of drugs.

Would you consider buying the product? Would make a suitable gift for the right type of cyclist.

Would you recommend the product to a friend? Yes, if they were the right type of cyclist...

It is a bit of fun and is often entertaining, but is not claiming to be definitive, comprehensive, or ground-breaking.