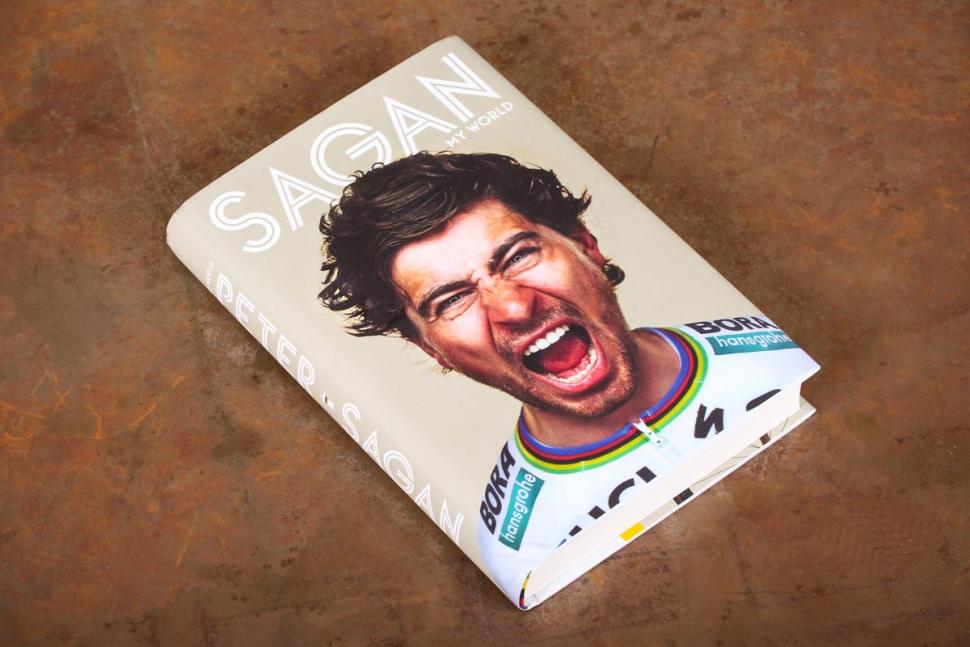 Peter Sagan has an enviable palmarès, which no doubt gains him a lot of fans, but what endears him to many more of the race-following public (and provides value for money to his sponsors) is his entertaining personality on and off the bike. And perhaps his hair. Sagan My World gives us some insight into Sagan's life, albeit a rather limited part of it.

You might be forgiven for thinking that with My World Peter Sagan is the latest cyclist to produce an 'interim biography', charting his life so far – but if that is what you want, you may feel short-changed. As Sagan says, 'I can't tell you my life story because...I'm only 28'; instead, 'one thing I can tell you is what it has been like to be UCI World Road Race Champion for three years'.

We hear very little about his cycling career before he joined the Tinkoff team in 2015; the fact that any of 2015 is covered is actually a bonus, given that he did not win his first World Championship until the end of that year. Conversely, the book ends after his winning ride in Paris-Roubaix this year, so we miss out on most of a year wearing the rainbow stripes – including winning yet another green points jersey at the Tour de France.

The result is that the biographical aspect of the book is concentrated into three years – and even then, not quite the three years promised. Fortunately, those years still cover some memorable moments in his racing career – events where I looked forward to hearing his side of the story.

Excitement of the sprint

The description of the final kilometres of the 2017 Worlds in Bergen open the book, and not only does Sagan do a great job of conveying the excitement of the sprint, he fills in some of the gaps in our knowledge: 'The truth is that there was almost as much confusion in the bunch as there was in front of the blank television screen.'

The 2018 edition of Paris-Roubaix has had extensive coverage, but Sagan's attempts to straighten his handlebar has had considerably less. Sagan explains the background to him using a 4mm hex key on his stem in the final kilometres – but also his failed attempts to knock his bar straight by banging his front wheel on the rear wheel of the rider in front. 'It didn't work...I know what I did wrong. I didn't tap him hard enough...Neither of us fell off last time, I obviously didn't give it enough welly.' Pure Sagan.

There is good coverage and analysis of that fateful stage in the 2017 Tour de France, where a crash with Mark Cavendish resulted in Sagan's expulsion from the race – and Cav's retirement. Sagan's conclusion is that, 'My elbow coming out is the result of the contact, not the cause of it.' The litigation planned by his team is not covered, perhaps 'for legal reasons', even though it seems to have been resolved well before the book went to print.

The background and preparation for Sagan's attempt on the mountain bike cross-country title at the 2016 Olympics makes for another good story, with his tilt at the title beset by problems – especially punctures. 'People said I was unlucky, but mountain bikers know that punctures aren't luck, they're things you need to be a good enough bike rider to avoid if you want to win races.'

With detailed coverage of his racing not starting until 2015, Sagan avoids the need to mention a more controversial part of his earlier career, the 'bottom-pinching incident' at the Tour of Flanders in 2013. Perhaps we will have to wait for the proper biography for that story.

You're the one that I…

With the focus being on a small part of his cycling career, we don't hear so much about his personal life: his marriage to Katarina is covered briefly, and as a result there is some background to the Sunroot company and 'that video' – better known as the Sagans re-creating 'You're the one that I want' from Grease. However, their subsequent separation is something else that will have to wait for an updated biography.

Some of the best insights into Sagan's life come from the chapters that step away from the chronological racing narrative and focus on one aspect of his life. He gives us some history of Slovakia, described as 'an ice-hockey-playing country that had only been independent of its bigger neighbours for 25 years'. In another chapter we hear that, 'I don't like sprinting from a lead-out train...I love those messy sprints when everyone is all over the road and I can duck and dive.' How about his views on Oleg Tinkov? 'His capacity to offend is limitless...Will he back? I wouldn't bet against it.'

There could even be some 'world exclusives' (which are the least that one should expect from any sort of biography): his desire to 'commit myself to BORA – hansgrohe for the rest of my career...and then I don't have to think about working for anybody else again ever'. No doubt this means that the Sagan-branded Hansgrohe shower head will continue to be available for a bit longer!

Then there is the 'problem with my hip (that I still have to keep an eye on now and will do for the rest of my career, maybe my life)'. Or would you like to know what Sagan did after his exclusion from le Tour? He invited 28 friends to join him onboard the luxury yacht Christina O for a few days, during which time he 'slipped approaching the onboard jacuzzi and went headlong into the far side, face first, knocking out my two front teeth'.

Some of those present on that trip were from 'Team Peter', the Sagan entourage who are given full credit for giving him the support required to allow him to perform as he does – and, as he reminds us frequently, to not take things too seriously.

Finally, we can't miss the opportunity to hear from the man better placed than most to comment on those who have suffered 'the curse of the rainbow jersey': 'Curses were nothing to do with it: the slump in form was surely much more likely to have been caused by the interruption to their carefully crafted training programmes and lives beyond the bike.'

John Deering was the ghost writer for the book; he has a long career in journalism, and I have enjoyed a lot of his work – in particular the 2002 book Team on the run about the Linda McCartney Pro Cycling Team. His challenge here is to keep the flavour of the short, pithy statements that make Sagan such a memorable interviewee, yet polish the narrative just enough so that it flows and can hold our attention for a whole book.

I think he has struck a good balance: from what I have seen I doubt that Sagan's English would be good enough to produce such a readable book on his own, yet a lot of it sounds exactly like what Sagan would say himself. I think that a book written entirely in Sagan's idiosyncratic style would be hard going, however much of a fan you might be, but there is sufficient 'Sagan-speak' present to reassure you that he has been fully involved in the production.

There is enough insight into Sagan's career here to make the book entertaining, but not really enough for it to deserve the designation of a biography – not even an 'interim biography'. However, that won't hamper sales: there are plenty of people who will enjoy hearing about one of the most colourful riders in the peloton, however limited the scope.

An entertaining but incomplete story of Peter Sagan's cycling career, concentrating on his three years as World Champion

Make and model: Sagan My World, by Peter Sagan

From 2015 to 2017, Peter Sagan achieved the seemingly impossible: he won three road race World Championships in a row, ensuring his entry into the history books as one of the greatest riders of all time.

But to look at Peter's record in isolation is to tell only a fraction of his story, because Peter doesn't just win: he entertains. Every moment in the saddle is an opportunity to express his personality, and nobody else has succeeded in making elite cycling look so much fun. From no-hands wheelies on the slopes of Mont Ventoux to press conference mischief with clamouring journalists, Peter exudes a passion for the sport and a lovable desire to bring smiles to the faces of his fans.

So, for the very first time, you will have the opportunity to glimpse behind the scenes of Peter's world. You will discover the gruelling training programmes necessary for success, and how Peter copes with the pressure of high expectation. You will feel that sense of elation when crossing the line ahead of the pack, and moments of desperation, like in 2017 when Peter realised he wouldn't be allowed to challenge for his sixth Tour de France green jersey. But what better tonic than to ensure a third year in rainbow – an achievement which may never be repeated again.

£20 is a fairly typical price for such a hardback; an audio download is available for half that price.

The best insight yet into Sagan's way of life.

Covers very little of his career before 2015.

Would you recommend the product to a friend? Only to a Sagan fan.

We are given some good insights into one of the sport's more memorable and entertaining characters, but it is frustrating to know that there is so much more that could have been covered.