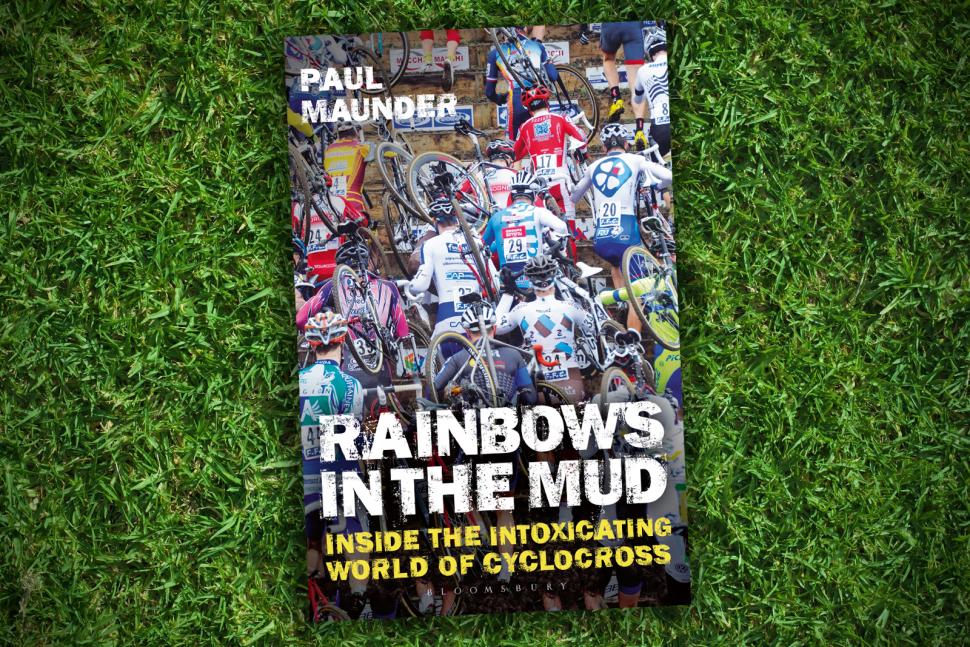 Rainbows in the Mud - Inside the Intoxicating World of Cyclocross

8
10
Discover why cyclo-cross attracts such loyal fans, and expect to be converted yourself
Weight:
440g
Contact:
www.bloomsbury.com
How we test

Cyclo-cross rarely receives the same attention as other branches of cycling, even when the Brits conquer the world: not from the papers, nor the public – nor book publishers. Rainbows in the Mud is one of the few books dedicated to the sport, and does a great job of explaining why it is worthy of our attention.

Cycling often divides opinion, and probably no discipline more so than cyclo-cross. Supporters are fiercely loyal, and would like others to share their enthusiasm, whereas detractors fail to see what the appeal is.

If you ever wanted to understand the significance of names such as De Vlaeminck, Koppenbergcross, or Superprestige to the world of 'cross, look no further. However, 'if you're looking for technical geekery, this isn't the place,' says the author, and nor will this book make you a better rider.

Rainbows in the Mud is not trying to be a full history of the sport, although it does cover a lot of it; nor is it a detailed account of the 2015/16 season, although the book is based around those events. I liken it to Slaying the Badger: nominally about the 1986 Tour de France, much of the book is spent giving the background information required to understand the stories that develop throughout the race. Similarly, Rainbows tells you enough about the sport, the courses, the history, and the people to fully appreciate not just that 'cross season, but also the sport in general.

Maunder is better placed than most to write this book: not only does he have some first-hand experience of competing in 'cross races, he clearly understands the sport and has written for some of the finest cycling magazines.

Maunder concentrates his attention on events in the UK, the USA, and Belgium. During his 'season immersed in the world of cyclocross' he often comes across the same riders, especially Katie Compton. Known as 'KFC' (and yes, you can guess what the 'F' stands for), she is apparently 'by far the most successful American cyclocross racer of all time, male or female'. A good choice to follow, with an interesting back-story.

> Buyer's Guide: 22 books every cyclist should have on their shelves

It is obvious from the first paragraph that Maunder has a passion for 'cross, 'the most demanding, intriguing, beautiful and dramatic sport', and he conveys that enthusiasm well. It is also clear that he sees 'cross as offering an antidote to everything that he dislikes about road racing, which is variously 'too professional ... too scientific ... aloof.' He is also weary of 'formulaic racing and incomplete start lists, of new events created in the Middle East for purely financial reasons'.

Maunder covers the arrival of CrossVegas onto the American calendar, which is a controversial event that arguably introduces some of the aspects of road racing that Maunder is trying to avoid: he quotes the organiser as saying: 'Show first, bike race second.'

You could hardly get a greater contrast to the Three Peaks race in Britain, which Maunder respects but fails to see the appeal of: 'I think the only way for me to understand it would be to do something I am never going to do – ride it.' For many people that applies to 'cross as a whole!

I suspect that 'cross will lose its attraction to some as it acquires more of the problems that beset road racing: in his coverage of one aspect, doping, Maunder says he 'wants to keep my faith in the innocence of cyclocross, but I won't be shocked if proven wrong'.

You could argue that 'cross is more advanced than road racing in another form of cheating, the hidden motor, being the first cycling discipline to both find one and punish the rider. Maunder covers the whole story well, accepts that 'it does expose the darker side of the sport', but he really does not want to dwell on such problems or let them destroy his favourite sport.

There's a series of image-rich books about specific 'cross seasons – Caven reviewed one for road.cc a couple of years ago, Cyclephotos Cyclo Cross 2014/2015 – which rely heavily on pictures to reveal the colour and action at a 'cross event, but Maunder uses no pictures at all – other than the excellent image on the front cover. It's definitely not a 'coffee table' book. For me, the ideal book would be a blend of the two styles.

As one of the few books about cyclo-cross, Rainbows in the Mud should have a ready audience amongst the already-committed. It could also prove invaluable to anyone trying to help others understand their passion, as it really does offer 'an insightful, moving and hugely entertaining depiction of an intense and dramatic world'.

Discover why cyclo-cross attracts such loyal fans, and expect to be converted yourself

Make and model: Rainbows in the Mud - Inside the Intoxicating World of Cyclocross

Cyclocross is no longer cycling's hidden gem. Its rapid growth in the USA and UK means this intense and dramatic sport is exploding into the mainstream. With a season running from September to February, cyclocross is cycling's only purely winter discipline, demanding a combination of athleticism, supreme technical skill and ruthless tactics for the muddy conditions.

In the sport's heartland of Belgium, major races attract crowds of thousands and have a carnival atmosphere fuelled by heavy drinking, ringing cowbells and pumping airhorns. Many top riders have enthusiastic fan clubs and are national celebrities – one even had his own reality TV show. On race day, Belgian and Dutch television coverage is akin to a major football match in the UK, stretching for hours with pre-race interviews, pundits and behind-the-scenes films.

In Rainbows in the Mud, Paul Maunder spends a season soaking up the sport's rich culture and history, and mixing with the obsessive fans, celebrity riders, and old-fashioned patriarchs of the sport. Following the riders – novices, veterans, American, British – as they slog their way through the season, he captures the spirit of this flamboyant cult sport, and paints a picture so vibrant you can almost feel the mud under your feet and taste the beer, mulled wine and frites.

Title: Rainbows in the mud

A bit expensive for a paperback of this size with no pictures – unless you find 'a deal'.

You will learn a lot from an enthusiastic and knowledgeable author.

Does a great job of explaining why cyclo-cross attracts such loyal fans, and tries hard to convert the rest of us.