7
10
Another enjoyable attempt by Simon Warren to wear your legs away, but this time it serves up slightly short measures
Weight:
153g
Contact:
www.quartoknows.com
How we test

Look out, Simon Warren's about, which means yet another gruelling series of hill climbs that fill in some of the gaps inevitably left after the publication of the two volumes of '100 Greatest Cycling Climbs'. With one or two minor grumbles, 'Cycling Climbs of Scotland' is also essential reading for your Scottish cycling holiday – though not if your aim is a relaxing time.

I thought Scotland was least well served by the original two volumes. The first included only seven hill climbs from north of the border, but 14 in the south east of England. So this volume will be keenly anticipated by all fans of Scottish cycling. It was surprising, then, to find that this is the thinnest of the regional guides published so far, with 60 hills, compared to 75 in the Yorkshire and Wales volumes. Eighteen of these have already featured in the first two books, leaving 42 new challenges – perhaps not quite the generous serving we have come to expect from the series. 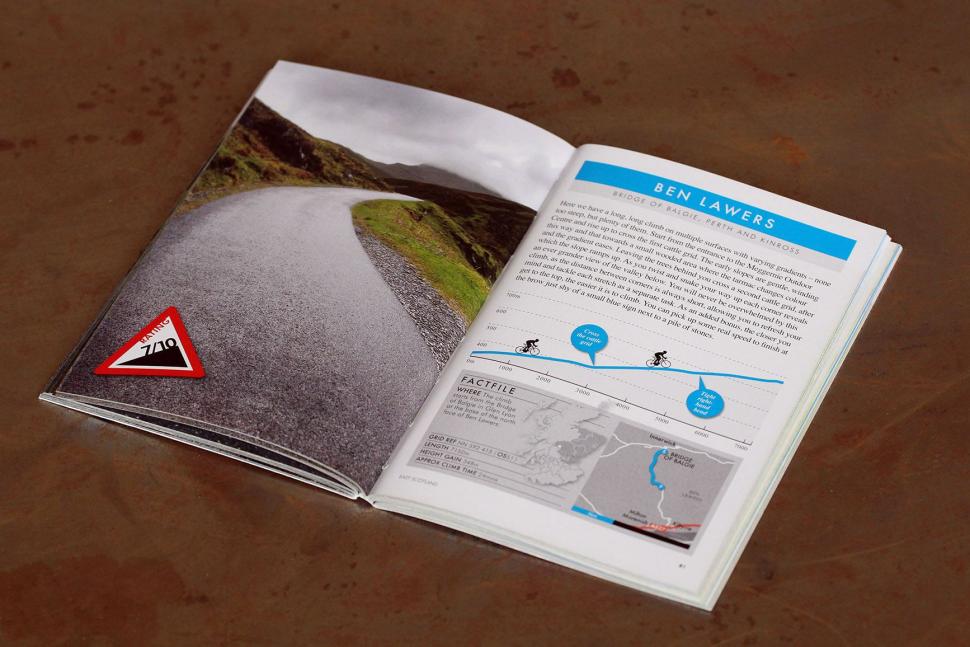 It's true that vast swathes of the Highlands have few roads, and Simon Warren does well to distribute his choices equitably around the kingdom. He's divided Scotland into four: The Highlands, East, West and Southern, and the rides seem to fall comfortably into those groupings without too much searching back and forth across the chapters to link together hills.

Inevitably, the section covering the Highlands contains many star challenges and all the biggest – Cairn Gorm, Bealach Feith Nan Laogh (at Strontian), Glen Coe and the fearsome Bealach-na-Ba (awarded 11 out of 10) have been seen before, so Warren heads to Ullapool to test his legs on An Teallach (almost 13km long) and even further north to Quinag – personally recommended by your reviewer.

Skye is another magnificent destination for road riding and Warren adds three more climbs on the island. Having just returned from Skye when the book arrived, I looked to see if the beastly toil from the harbour at Elgol had made it in, which it hadn't, but I can heartily recommend you avoid it if in the area.

> Find more road.cc reviews of books in the series here

The author hasn't extended his search into the Outer Hebrides, but Mull, which has been previously overlooked, gets two dramatic-sounding entries.

Glasgow-based readers should find plenty to go at around Stirling, Lanarkshire and west into Argyle and Bute, plus a rare venture into urban riding at Lyle Hill, Greenock. From previous books I've gained the impression that the author enjoys an urban challenge so was a bit disappointed that there are few of these. A handful might have made up the numbers.

In the south, Dumfries and Galloway gets more of the recognition it deserves, with the inclusion of roads like The Wall of Talla and Lowther Hill. The Borders, too, gets a much better look-in. The eastern region covers the majority of the Cairngorms, wherein go climbs up the Cairnwell Pass and Crathie Hill, and the areas around Fife and Perth also get a very decent and well-deserved entry. All the usual features are present and correct – coloured sketch-maps for locating the hill, 'factfiles' for at-a-glance summaries of the challenge presented, a tick-list, and many, many photographs of rain-sodden Scottish roads. The volume covering Wales took some stick for mis-spelling of place names. In no way am I qualified to judge whether the author's grasp of Gaelic is better.

All in all, it's undoubtedly another entertaining guide that's bound to create discussion and inspire longings and fear in equal measure; but for the first time in the series I felt the book had come up slightly short of expectations. In the introduction, Simon Warren says he did most of the research on two week-long trips and I suspect it can take quite a bit longer than that to really get to grips with such a big and diverse nation.

Another enjoyable attempt by Simon Warren to wear your legs away, but this time it serves up slightly short measures

Make and model: Cycling Climbs of Scotland, by Simon Warren

Wild, remote, windswept and downright epic, the climbs of Scotland are not for the faint of heart. Crossing weather-beaten islands and often snow-covered mountains, these great roads demand the utmost respect and are often set in scenes of indescribable beauty. The famous glens and lochs that draw visitors from around the globe are the backdrop to legends such as The Lecht, The Talla Wall and the one and only Bealach-nà-Ba. So if you like your cycling rough and rugged, if you crave fresh air and pristine wilderness, then head north to tackle the Cycling Climbs of Scotland.

The low price of the series volumes makes them cheap to collect. This is a bit thinner than most, though.

The rides are clearly presented and well set out. The spread around the Scottish regions is good.

It's good, but a bit short on content, especially if you already have the others in the series.