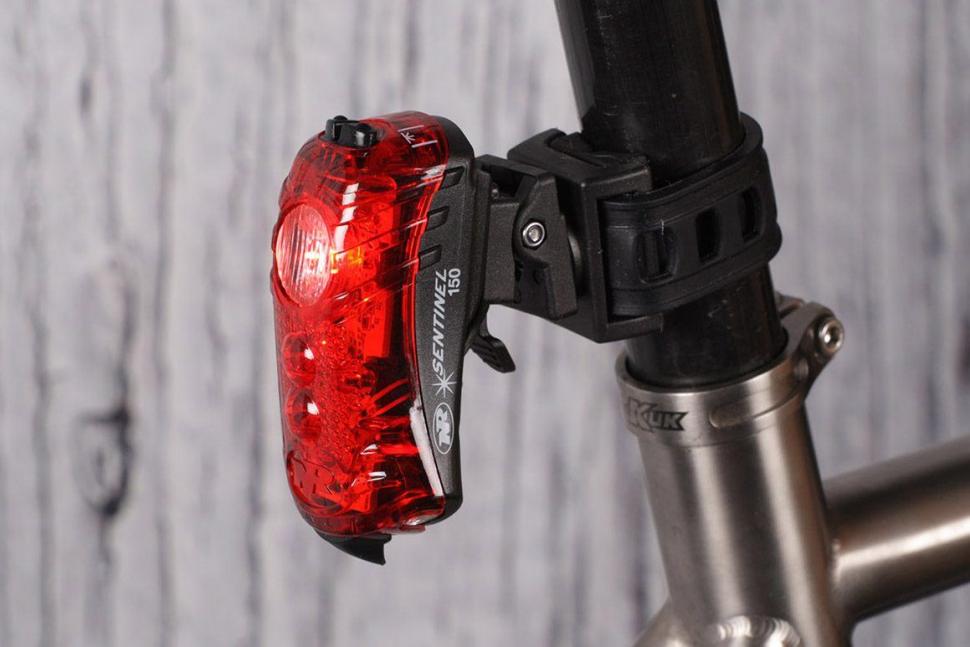 7
10
Super-bright with added lasers but requires a lot of button pressing
Weight:
117g
Contact:
www.niterider.com
How we test

Laser beams are cool. The NiteRider Sentinel 150 features four main light modes and three separate laser modes that make a bike path behind your rear wheel. The small buttons are awkward to operate in big gloves, though, and take a lot of pressing to turn the light off. The new mounting bracket is a lot better, though than the one it replaces.

When I first got this light out and found that it beamed down a laser bike path behind me, my first thought was 'cool'. My second thought was more along the lines of 'this might make me look a little silly...' But anything that helps drivers spot you is good, I guess, and it'll certainly help around town. For my country lane commuting the fact that the 'lane' can't be properly seen beyond about 10 metres makes it less useful – but its brightness makes up for it.

There's no doubt this light has the ability to make you visible, especially during the day – packing a serious punch with its 'retina searing' 150-lumen daytime blast. It's a slower flash than the night-time modes, and lasts a significant amount of time. 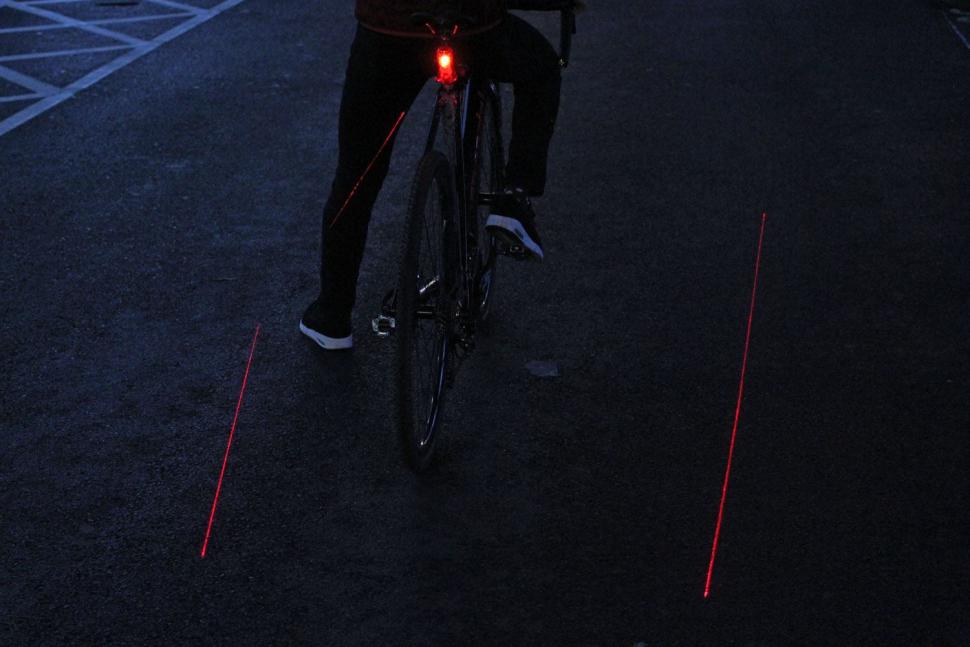 Operating the light is done by two small but prominent buttons on the top of the light. They are spaced very close together, though, which makes using them in gloves quite tricky. It's not the most simple light to use, either: the odd cycling of modes left me pressing buttons for a while before the light and laser turned off. There are much simpler options out there. I also gave up trying to adjust between the flash settings on the move.

Battery life is spot on for the constant beam, which runs the battery down in just over 4 hours. Running the lasers as well will bring that down below 3 hours, but that is still very impressive for such a bright light. Recharge time is 4 hours via a USB port. The port cover was snug and I've had no problems with water ingress from heavy rain.

The Sentinel 150 is quite light for its chunky size and hits the road.cc scales at 1g over the claimed 116g.

The one thing that let down previous versions of this light was the mounting bracket. The locking mechanism tightened by an Allen key, but it just never tightened to the point where it was stable on the seatpost – whatever the diameter. The bolt would slip once you get to a certain tension, which just wasn't sufficient to keep the light in place. Hitting a bump would knock your personal bike lane out of line. Thankfully, NiteRider have released this version with a rubber strap. A simple fix and problem solved!

It also meant I could remove the light quickly when I got to work; the 'quick release' catch is a little fiddly, but it's easier when you get the hang of it.

The NiteRider Sentinel 150 is a brilliant light in itself, with a vastly improved mounting system. It does also make an excellent support light, attached to a bag, and whatever I think of the laser bike lane feature, I'm sure it will be very useful in city centre riding where everything is close together, though it becomes less useful when riding on faster roads.

From NiteRider: "The NiteRider® Sentinel™ 150 incorporates three powerful LEDs to produce a retina searing, daylight visible, 150 lumens. Allowing you to be seen day or night. The Sentinel™ has 5 modes, is USB rechargeable and has a unique safety feature, Laser Lanes! The Laser Lanes mode is designed to project ultra-bright laser lines on the ground, giving the rider their own virtual lane, further increasing visibility."

All in one, Laser and tail light!

Compatible with round and aero seat posts

The light itself is perfectly robust and the mounting bracket is secure but the buttons are way too small.

Rate the light for design and ease of use. How simple was the light to use?
4/10

The buttons are too small and it takes too long to get the settings sorted and then turn the light off each time you use it.

Vast improvement over the old system.

For the power of the light, the battery life is very good and 4 hours from flat to full charge is also quite good.

The super-bright 150-lumen day flash means you'll be seen from a long way off. However, laser is only effective in the city.

I've had no water ingress or problems with the electronics failing.

For its chunky size, it's quite light and also pretty much bang on the claimed weight.

The light was excellent, but you can't see the lasers over 10 meters.

The light is super-bright and the laser bike path is a good safety feature for city riding.

The buttons are too small.

Did you enjoy using the light? No. The buttons were too fiddly for me to use without thinking.

Good light with a much improved mounting kit. The lasers are good for city riding but become less useful on fast roads, and the buttons are fiddly.

I usually ride: Rose Xeon RS  My best bike is: