8
10
A really neat package – especially if the fold is as important to you as the ride
Weight:
9,230g
Contact:
www.brompton.co.uk

There are three types of folding bikes. On one end of the scale, there is the folding bike that concentrates completely on the fold and ride quality is therefore a secondary consideration. At the other end of the scale is the bike that is designed for riding but that you can also fold if you have enough time and the right tools to hand, in other words a bike that you wouldn’t want to fold multiple times per day.

In the middle are the folding bikes that try to achieve a compromise between folding and ride quality. They are easy to fold; they ride well enough, but the folded package is not as small as others. Bromptons are very much at the first end of the scale, with Airnimal Joeys at the other. Dahons and Birdys fall in the middle.

A Brompton is one those products that is quintessentially British, both in the way it looks and in the way it’s been put together. Brompton designs and builds in West London and they are also reassuringly honest and transparent about their offering. Brompton weights, for example, are known to be the actual weight of the bike including pedals and mudguards and such like (between 9 and 12.5kg, if you want to know). 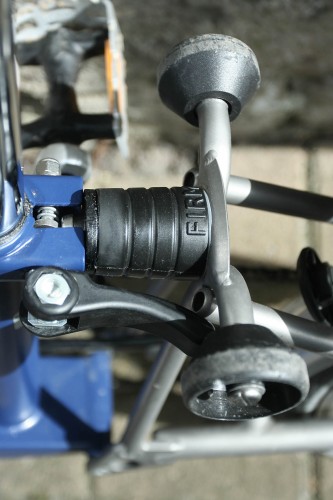 Bromptons, in terms of how they are built and how you order them, are best described as "a bit different". Three quarters of the 1,200 parts that make up a Brompton are unique to them. On the one hand, this means that everything is engineered specifically for the job it needs to do. On the other hand, you can only get the spares from Brompton. An example of this potential issue is when the lower jockey wheel fell off the chain tensioner on our test bike because the bolt that holds it on had worked loose. This is a non-standard bolt, which means my part box couldn’t fix the problem and a trip to the bike shop was necessary. With a good dealer network across the UK, luckily this isn’t usually a problem.

Ordering a Brompton, you can either buy off the shelf from one of the key models or you can use their custom route, called Bspoke. This allows you to specify handlebar type, number of gears (and even the gearing, to a certain extent), saddle, seatpost, luggage options and so on. This, of course, means that the bike has to be made to order and you’re looking at a lead time that is likely to be in the order of 2-3 months. Colours can be chosen from a fairly long list at extra cost. Brompton are a one size fits all – different rider heights are accommodated by moving the saddle up and down while a telescopic seatpost is available if the standard one is not long enough. Of course, seat height is not all there is to bicycle geometry – if you’re tall you might want to test ride to make sure you can live with a reach that is going to be relatively short for you.

The particular model we have is the 2-speed Superlight (titanium forks and rear triangle) with mudguards. You can get it with a titanium seatpost too. 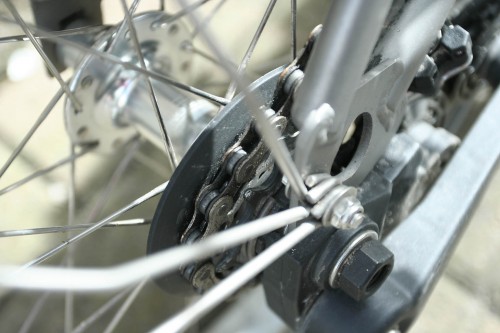 There are a few things that seem a bit peculiar at first, like the combination of a 3-speed hub gear with a 2-speed derailleur to achieve six gears. Or the very recognisable shape. Or the ingenious fold. None of these things are wrong, just a bit odd. This ingenuity and oddness has rightly earned the Brompton lots of design awards as well as a Queen’s Award for Enterprise in both the Innovation and International Trade categories.

The fold seems to be what gets talked about most when Bromptons are discussed. And rightly so. The fold is what it is best at – it’s a “killer feature”. The Brompton fold takes four steps (and the order is important): flip rear triangle under frame, fold main frame tube back on itself to hook onto folded rear triangle, slide seat post down to lock the previous two folds in place and, finally, fold steerer tube in half and click into latch to hold it in place. If you have a folding pedal, there’s an extra step to make the package even more compact. 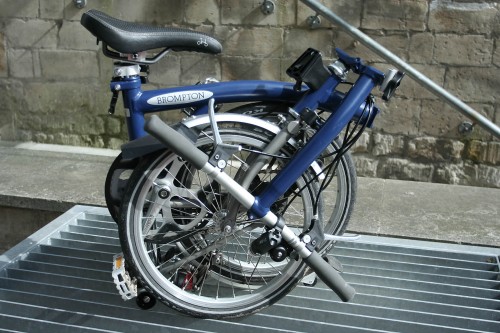 Doing the steps in the right order takes a little bit of getting used to – not very long. And it’s worth it. This is the most impressive fold I have seen: the most ingenious (it neatly hides vulnerable cables and greasy chain and gears), the most compact (58.5cm x 54.5cm x 27cm), the most solid (everything is locked in place) and the easiest to carry when folded. Important, that last one, as I know from experience with my Dahon Helios that you actually end up spending a lot of time carrying the bike folded. Because the inside pedal is folded away (if yours has this option) and the weight is centred to the right of the saddle, this bike is remarkably easy to carry. This was a very pleasant discovery. The saddle ours came with has little ridges under the nose for your fingers to fit in which is a handy detail.

In fact, Brompton are quite good at nifty little details. The shifter and bell combination for example, or the aforementioned folding pedal. The fact that the fold is locked and won’t come undone, not even a little. The rear triangle is locked in place when unfolded on our model as well, which means carrying the bike unfolded – down a flight of stairs, for example – doesn’t mean the rear triangle keeps kicking into you like it used to on older models. The first part of the fold – flipping the rear triangle under the frame – allows the bike to be “parked”. Brompton have the best thought out luggage options out of any folder too: there’s the bag that clips onto the (custom) bracket on the steerer tube and the custom rear rack. "Custom" meaning: “buy from Brompton” and “not cheap”. Robust, though.

If you are planning on buying accessories for your Brompton, such as bar-ends, or lights, think carefully where you are going to put them before you buy. Everything on a Brompton – and this is true of any folder – is positioned where it is for a very good reason: so as not to hamper the fold. You might find that your bar ends or lights will not fit quite where you’d like them.

The ride, then. As I mentioned above, this is where I feel there’s a bit of compromise. Having 16in wheels enables a tighter fold, but they don't roll over irregularities as easily as larger ones. Sure, this is soaked up by the rear suspension, but this and the stemless design do make for a slightly twitchy feel. This is especially noticeable if you’re going slowly – low speed manoeuvring feels different than on other bikes. At higher speeds this is hardly noticeable; you can quite happily zoom down hills with confidence. Just to put this in context, one bloke has successfully ridden Paris-Brest-Paris on a Brompton – a 1,200km (750 mile) ride that has to be completed in under 90 hours; it’s a fully functional full-size bike.

In terms of components, in my opinion their quality does not reflect the price of this bike. This is obviously not where the money goes. Gear changing is a bit sloppy and lacks immediacy, braking is adequate but not impressive, the brake levers don’t feel ergonomic and are quite far away from the bars for somebody with relatively small hands like me. I can’t comment on the build quality of the wheels – while I had no problems, I didn’t have the bike for long enough to make a judgement on this. As a side note, the version with 2 gears (74in and 54in) is not really appropriate for hilly areas. I would assume that the six-gear version, especially in the -12% variation, would be more than adequate.

I also have to say that I had a couple of mishaps with this bike. The first was that the nut and bolt that holds the shock dampener onto the rear triangle came loose, and “unheld” the aforementioned. Not a big problem – the local bike shop had a nyloc nut that fitted.

The second problem was that the nut and bolt that holds the jockey wheel on the chain tensioner came off, sending the jockey wheel flying. Unfortunately, this is not a standard part and required a trip to a Brompton dealer. Both incidents rendered the bike unrideable for the rest of that journey. In its defence, the test bike we were sent was not new and, I would imagine, has been shipped around the place for various people to test it. I will put the jockey wheel issue down to the lack of a regular service and assume this wouldn’t happen to a regularly bought Brompton.

On the whole the Brompton is a really neat package – especially if the fold is as important to you as the ride. I would recommend the Brompton to anyone who wants to speed up their journey to and from train stations or wanting to cheat the traffic by driving part of the way and doing, for example, the inner city bits by bike. The Brompton has the smallest fold out there, so if space is at a premium, this is the folder for you.

Did you enjoy riding the bike? Yes, although more gears would have been good!

Would you consider buying the bike? If I did more train commuting, I certainly would

Would you recommend the bike to a friend? Yes, depending on their needs.

I usually ride: All of them!  My best bike is: Cervelo Dual 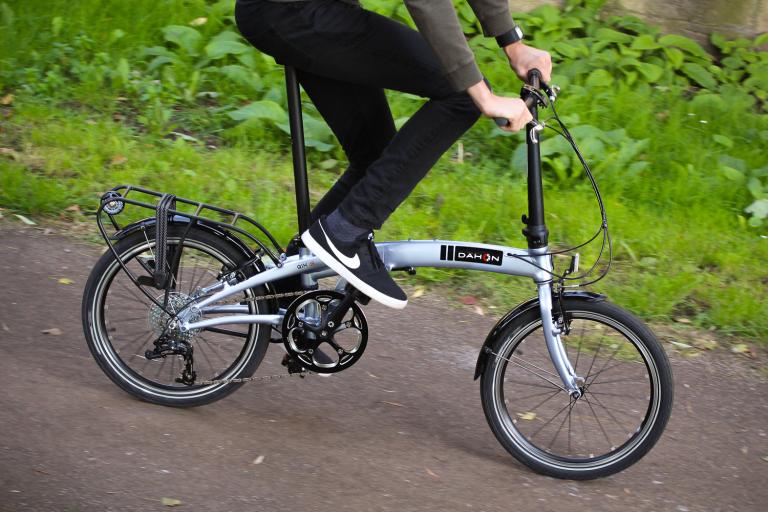 Dependable folder that's easy to stash away and rides well 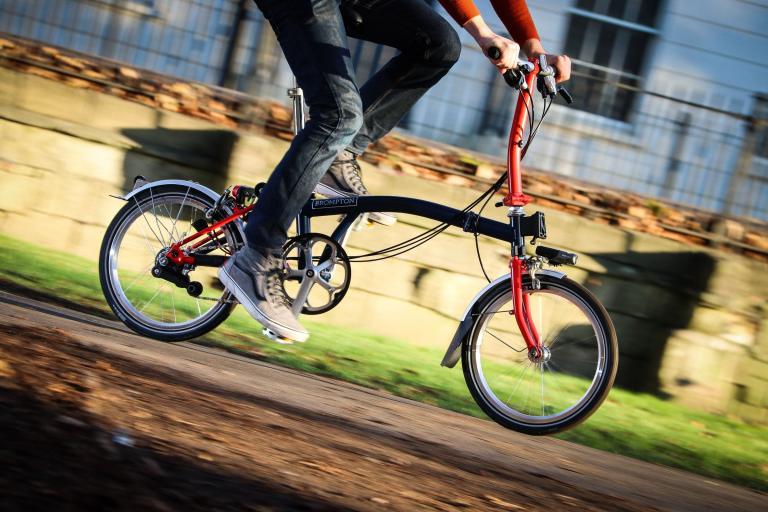 The iconic Brompton is hard to beat, easy to use and a delight to ride 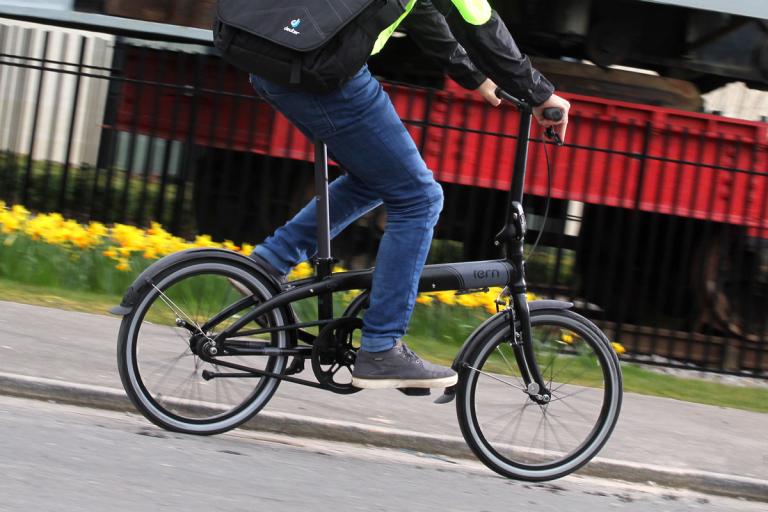 Draggy coaster brake takes the shine off this affordable singlespeed folder but or shorter, flatter journeys, it's fine

The budget version of the fully-sprung German folder doesn't disappoint. It's an all-rounder that rides well.