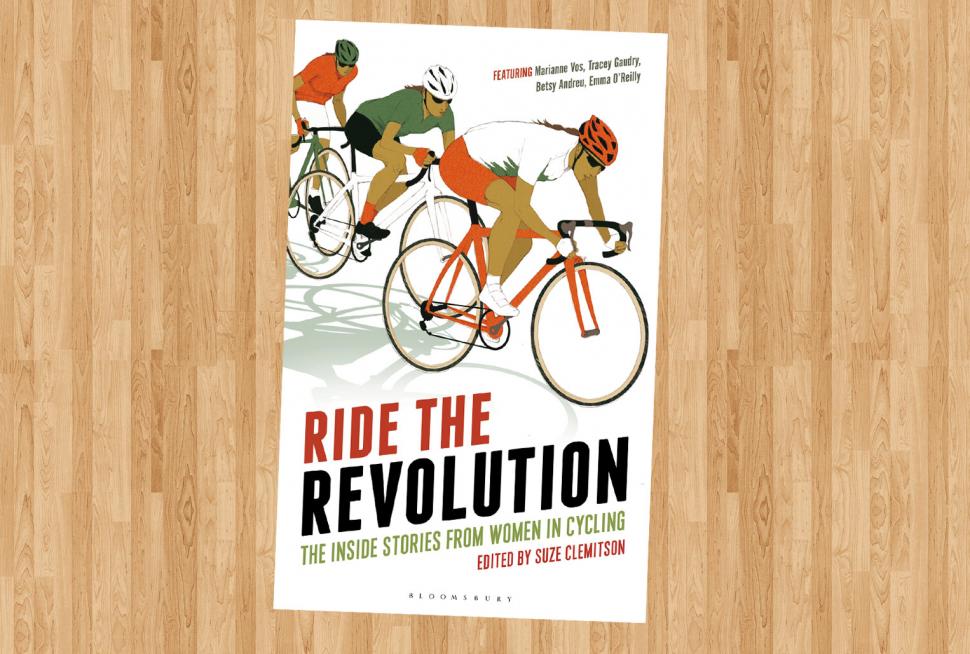 Ride The Revolution – The Inside Stories From Women In Cycling, edited by Suze Clemitson

8
10
This is a book written entirely by women, mostly about women, but certainly not just for women – informative and entertaining
Weight:
450g
Contact:
www.bloomsbury.com
How we test

This is a book written entirely by women, mostly about women, but certainly not just for women: the revolution in the title refers to the increasing participation of women in so many aspects of the sport, and this book celebrates that involvement.

I was expecting (and hoping) that the book would offer something similar to the well-respected Cycling Anthology series, but I think it actually offers an even greater variety of story and contributor. As you might expect, there are chapters from current and past riders, but also from journalists, presenters, commentators, bloggers, photographers, race organisers, team mechanics, the 'industry', and a team chef.

About half of the contributors wrote their own chapter, and in a few cases the work has already appeared in another book or on a website. Suze Clemitson is credited with editing the book, but in reality her contribution goes much further as she also wrote a dozen of the chapters, as well as providing some translation services.

Names such as Marianne Vos will be familiar to most cyclists and will of course attract attention to the book. We learn that Vos still has one big ambition, which is to compete in (and presumably win) a Paris-Roubaix for women – and she believes she will still be a pro cyclist when that opportunity arises.

Emma O'Reilly and Betsy Andreu probably received more attention than they might otherwise have done because of their important part in the eventual downfall of Lance Armstrong, and their chapters revisit that story 'in their own words', but also cover welcome new ground.

The book claims to 'examine the sport from a new perspective to provide insights that rarely make it into the mainstream', and nothing does that better than this example from Dutch professional cyclist Marijn de Vries, who describes the technique involved in having a pee sufficiently quickly that she does not get left behind by the peloton when racing, or by male cyclists when training.

Essentially, you pull one leg of the shorts up as far as it will go, and then use both hands to use the properties of Lycra and pull the material on the rolled up leg firmly towards the other one before squatting. Done properly you don't get wet hands or shorts apparently, although I have not managed to convince my wife to test it yet. As an added bonus, no additional flesh is bared during the process.

I can't claim to be familiar with the names of all the contributors or their achievements, but one that stood out to me as being worthy of greater recognition was Kathryn Bertine: she is (at least to me) the least well known of the four ladies behind Le Tour Entier in 2013, which was set up to lobby for a women's event at the Tour de France. When you have Marianne Vos, Emma Pooley and Chrissie Wellington involved as co-founders you should have a powerful voice, and the four achieved their aim in 2014. Hopefully it is just the first step towards the return of a real Tour de France for women.

There are a few contributions that touch on what I would class as the 'campaigning element' of improving women's lot in cycling – such as securing sponsorship, minimum wages, or the difficulties in buying plus-size women's clothing. If anyone wants to know why we don't have more women involved in cycling, this book will provide an introduction to some of the issues that still need to be overcome, but that is certainly not its main purpose.

Although the book does not call itself 'volume 1', I do hope that it is the first of many: a work of this quality and variety is informative and entertaining for both genders – regardless of which one wrote it.

This is a book written entirely by women, mostly about women, but certainly not just for women – informative and entertaining

Make and model: Ride The Revolution – The Inside Stories From Women In Cycling, edited by Suze Clemitson

Celebrate the diversity of women's writing about the glorious, sometimes murky and often bizarre world of cycling in all its soapy operatic glory.