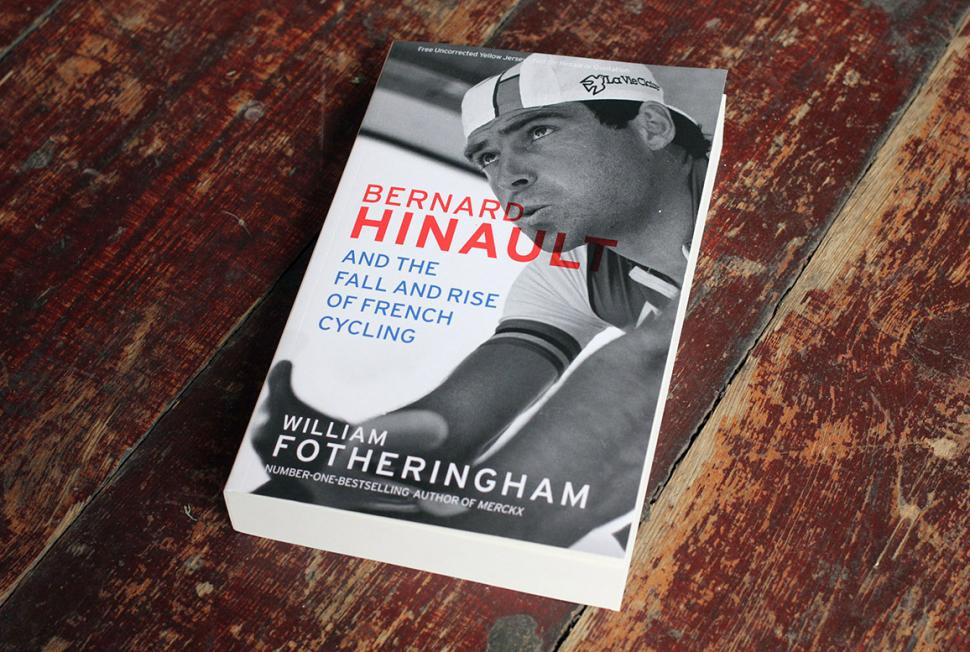 Bernard Hinault and the Rise of French Cycling

Bernard Hinault and the Fall and Rise of French Cycling

9
10
Thorough, well-researched, and highly readable biography from Will Fotheringham about one of cycling's best ever riders
Weight:
300g
Contact:
www.randomhouse.co.uk
How we test

With it being almost 30 years since Bernard Hinault retired from professional cycle racing, some people might not realise not just how good a rider he was, nor what impact he had on the sport at the time: any ranking of 'the greatest cyclists of all time' will have him up near the top. Bernard Hinault and the Fall and Rise of French Cycling by William Fotheringham gives a very full account of Hinault's life, and explains how he became 'the dominant force in cycling for almost a decade'.

We have seen quite a lot of Bernard Hinault on British shores over the past year. As part of the work he does for the ASO, he can often be seen standing on the podiums of the races that they organise – such as the Tour de France, which paid us a visit last year. More recently he was over for the inaugural Tour de Yorkshire last month, which again was an ASO production.

I like to think that the ASO hired Hinault partly to act as a bouncer on the podiums whilst he was running the ceremony, because it is a logical extension of one of my favourite Hinault stories from the book. In a stage of the 1984 Paris-Nice race the road was blocked by strikers from a nearby dockyard. 'The entire group slammed on the brakes, apart from one man'. Hinault. In the ensuing fracas Hinault threw more than his fair share of punches at the strikers, but he also suffered a broken rib.

Interlopers have occasionally made it onto recent Tour de France podiums, and in his role as 'chief bouncer' Hinault has been instrumental in forcibly removing them. Any potential podium-crasher reading this book will have a better idea of what reception they will receive if they want to try something similar.

The story of how Hinault won the 1981 Paris-Roubaix is essential to understanding the character of the man: 'Hinault's aversion for the cobbled lanes of northern France is celebrated', with the risk of a crash jeopardising a whole season. It is 'a really stupid race... but I will make it mine.' Hinault was not one for ducking the challenge of conquering 'one of cycling's great institutions', whatever his views of the event.

That part of the story has been told many times, but there are many more anecdotes about his race in this book: how his second child was due at any moment, so convoluted arrangements were made by his wife in case it was necessary to get a message through to her husband in those pre-mobile days; or how the inner tube was poking out of his front tubular after the finish, meaning that he had narrowly escaped a third flat tyre.

Another Hinault story that has become part of cycling folklore is his win at the 1980 Liège-Bastogne-Liège. In the Artic conditions, most riders (and even spectators) had given up, but Hinault simply rode hard to keep warm. Some of his fingers suffered damage that still affects him today. After the race he had to bathe in cold water, 'because his body couldn't bear the pain of hot water'.

Perhaps the most controversial episode in Hinault's career concerned his apparent agreement to allow Greg LeMond to win the 1986 Tour de France, if team-mate LeMond would support Hinault to win a record-equalling fifth Tour in 1985. Whilst that is what eventually happened, Hinault's method of support involved attacking LeMond at every opportunity: 'I've thrown everything at Greg. I've pushed him as hard as I can and spared him nothing and have put him under maximum pressure'. Hinault explained that this was all for LeMond's own good, so that he would be better prepared to cope with the worst that any other opponent might throw at him in the future.

Whatever the intention, 1986 would be the last time that Hinault would have the opportunity to ride le Tour, as he had already announced that he would be retiring at the end of that year. This leads on to the other aspect of this book, for as well as being a most thorough account of Hinault's life, this book also puts his career into context within 'the fall and rise of French cycling'.

Ever since Hinault retired the French have been searching for another rider capable of matching his achievements – and especially in their home race. Hinault is probably the best ever French cyclist, and certainly the last great one. With two home riders on the podium of le Tour last year there are positive signs that French cycling is reclaiming its place at the top table - but 'while France may one day find a new champion, there will never be another Bernard Hinault'.

Cycling has also failed to find another patron with the status of Hinault: 'men with the hardest characters and the strongest legs, who could dictate the pace of the racing, and could exert influence with organisers and other teams ... they ruled the sport through muscle and mouth.'

Fotheringham has once again produced a typically thorough biography, which is every bit as compelling a read as his previous works on Eddy Merckx and Tom Simpson.

Thorough, well-researched, and highly readable biography from Will Fotheringham about one of cycling's best ever riders.

Make and model: Bernard Hinault and the Fall and Rise of French Cycling