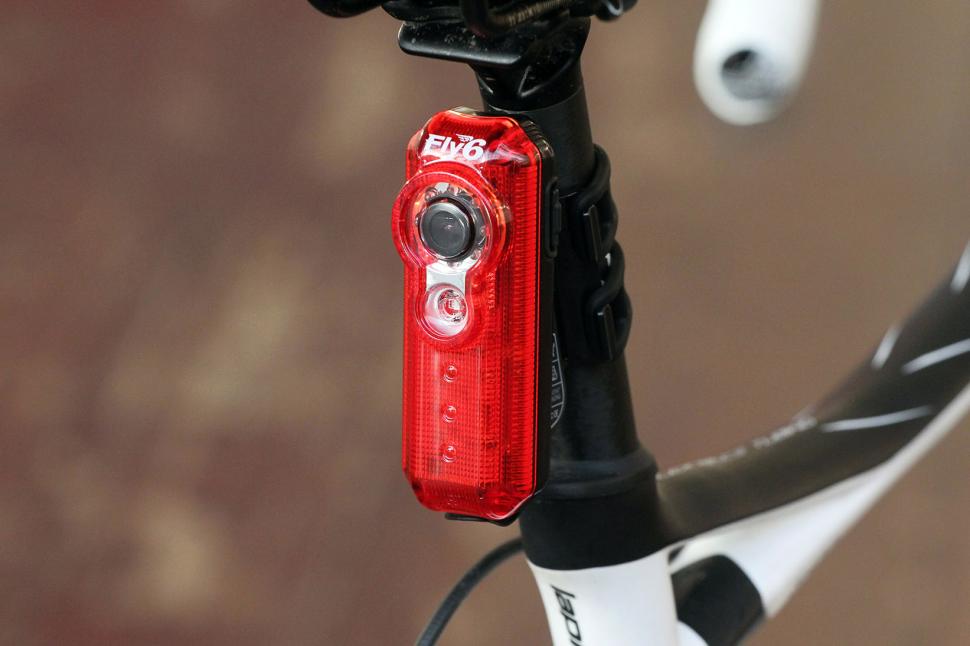 8
10
Great safety product whose genius lies in its simplicity of use
Weight:
113g
Contact:
www.fly6.com
How we test

The Fly6 combination camera/tail light has been popping up a lot lately with footage of face slams and car collisions, but just how good is the first seat post-mounted integrated tail light and HD camera?

Value is a tricky one, as it's a camera/light combo currently in a field of one. 720p action cameras are coming down in price all the time and you could get a camera and a good light for the same price as the Fly6, but they wouldn't be a combination package and the camera wouldn't be designed to attach to your seat post pointing backwards and filming continuously.

The combination of the two in the Fly 6 will set you back £109.99 which is expensive for a backlight, but cheap for the quality of camera you get.

The flashing patterns and on/off functions are controlled by two buttons on either side of the light. It also has rubber, element-proof flaps at the bottom for the memory card and USB slots. Initially, I thought that these may fail when cycling through puddles without mudguards, but I am yet to have any kind of problems with them in 10 months of use and countless rain soaked rides.

This is first and foremost an action cam. It allows you to film without having the stigma of looking like a teletubby that having a camera on your head brings. So how does the quality compare to other action cams?

When I initially started filming I was worried that the LEDs surrounding the camera lens would burn out the picture and that as this was a brand new concept, it would not have been well thought out.

I needn't have worried. The team at Fly6 have created not only an effective backlight, but a camera that has sharp imaging and crisp sound. The camera itself films at 720HD rather than the 1080 that many have become accustomed to. However, the quality of the pictures is still strong. The fact that it is embedded amongst lights does not cause image burning and you can only faintly register that there are LEDs placed around the edge of the lens.

See this video as an example - https://www.youtube.com/watch?v=1vVvkqMrc3E

The quality of the sound and pictures has also remained high despite the conditions. In the video above, you can see that the weather is terrible and although a few drops of rain get onto the lens, they have little effect on the overall quality of the picture. The same unfortunately cannot be said, about the quality of the driving.

The backlight camera sits on the seat post below the saddle and attaches using a bracket and laddered rubber straps. The light itself sits in the bracket. This is meant to allow it to simply clip in and out, but in reality, it is difficult to do so and I have needed to use a knife just to unclip in the past. However, this is simply remedied by taking both the bracket and light off at the same time. It is so simple to fit that this takes the same amount of time as it would to clip or unclip any light.

One of the few real issues that I had is the use of the light with a saddle bag. This is because it is quite long (around 10cm) so unless you have a particularly high saddle there is little real estate for both. I have got around this because I have a seat clamp that isn't too far extended, so I can simply put the bracket over the top.

Battery life on the camera is claimed to be around five hours and I think that this is relatively accurate. I have been using the light for around nine months and on average I need to charge it once or twice per week. It beeps to let you know the percentage of battery that you are on, one beep signifying 25% of battery usage, so four beeps means fully charged, while one beep means you should think about charging. When the camera runs out of battery, it emits a loud extended beep (which is confusing for anybody around you on the road) but allows you to have 90 minutes of just the light, meaning that you can safely get to your destination.

Charging and uploading of film can be done through USB. It also comes with a 8GB micro SD card that allows you to upload direct to the computer. However, if nothing of merit happens, then you don't need to do this. Undoubtedly, my favourite part of the camera is that it self-wipes. So after you have used up all of the memory, it simply starts recording over the oldest footage. This means that it can simply be left on the bike and you only need to charge it occasionally.

Compared to other action cams that I've used, this is a real game-changer. No more realising that the great moment you thought you had recorded, you hadn't because you had run out of space. It means that you can have it turned on all the time. I have recorded everything from club rides to near misses whilst commuting using the camera, it really allows you to capture everything.

It also has good safety functionality with its 'Incident capture protection technology'. This means that if you are knocked off your bike on a country road and the Fly6 is left on its side for 45 minutes, it will save the footage, without being overwritten.

In conclusion, from using the Fly 6 for a while, I can safely say that it is a great innovation in cycling safety. It won't be for everybody and for some the price will be prohibitive, but from the protection it gives you (/content/news/134042-video-footage-convinces-police-aussie-cyclist-who-hit-car-was-not-wrong) especially if you have been in a disputed accident, it is unbeatable. Added to that is the fact that all you need to do is turn it on and leave it to record allowing you to record everything.

Great safety product whose genius lies in its simplicity of use

It is aimed at both commuters looking at improving their safety on the roads and club riders who want to record everything that happens during their rides.

They claim that 'it watches your back' and the premise is that people behave if they think they are being watched. The idea is to make people think that they could be being filmed whenever they see a red flashing light on the seat post of a bike.

At the moment, it needs more adopters to achieve the second aim, but as a safety product that can help with disputed incidents or reporting dangerous drivers, it is practically in a league of its own.

- Battery runtime up to 5 hours

- Battery runtime may vary based on settings and environmental conditions

No problems with usability. Having used this for around 10 months, I have had nothing at all go wrong. The only reason it lost marks was the clipping system from the light to the bracket that can be taken off as a whole just as easily.

Great as a camera and effective as a backlight, does exactly what it says on the tin.

Used this for 10 months and had no issues with it whatsoever.

Weighs more than most traditional backlights but when combined with a regular action cam, the difference is negligible.

Value is a tricky one, as it's a camera/light combo currently in a field of one. 720p action cameras are coming down in price all the time and you could get a camera and a good light for the same price as the Fly6, but they wouldn't be a combination package and the camera wouldn't be designed to attach to your seat post pointing backwards and filming continuously.

Impeccably, as a backlight and camera it is incredibly good.

The continuous recording is a real game changer.

A minor gripe, but the clip from the bracket to the light.

The Fly6 could be the start of a new cycling craze or a flash in the pan, with the sense of safety I have had from using it, I hope it's the former.