We first saw the Urban Cargo at Eurobike 2008 and we've wanted to try one out ever since. Now we have and it turns out to be a very comfortable and capable town machine with some nice touches. It's not all good news though: the expensive spec didn't really enthrall us and the cargo system needs a bit of work. As such it's hard to recommend the bike as tested here, the derailleur option looks a much better bet.

The Urban Cargo is built around a 7005 Aluminium frame that's certainly a burly beast. The dropouts are adjustable to tension the chain for singlespeed and hub-geared incarnations, and there's a gear hanger too. Bolted on to the frame is a thick-tubed rack that can serve either as a front or rear unit, and up front there's a rigid double crown fork that features an ingenious telescopic section to give you a much bigger range of bar height than you'd get from a normal spacer stack. Our test steed was fitted with a SRAM i-Motion 9spd hub and Avid Juicy 3 hydraulic discs, and the top-end spec also included lights, 'guards, a dynamo front hub and a Brooks saddle.

Swinging a leg over the Bionicon for the first time and you immediately notice that it's not quite as laid back as it appears: the 71/73 angles (steepened to 72/73 for 2010) are a touch more aggressive than most cruisers. The bar/stem arrangement quickens the steering a bit and the offset crown slows it down, the net result being that it's about right. I liked the telescopic forks which allow about four inches of vertical movement for the bars with the twist of an allen key. I set them high for a more upright position which is great when you're rolling along on the flat. The shape of the bars and stem mean knee room is a little restricted when you're climbing out of the saddle though, another reason I set the bars high.

Once you're up to speed (and at over 17kg this takes a little while) the Urban Cargo is a supremely comfortable and stable ride. The frame and fork are super-stiff but this is tempered by the low standover height which allows you to run a fairly long seatpost, and the bulbous Schwalbe Big Apple tyres soak up the bumps efficiently without making the bike feel vague. The brakes do a bang up job of stopping you too. Point the Bionicon uphill or push on for a longer ride and its weight starts to tell, but this is really a bike for short to middle distance cruising. And in some style: there aren't many bikes that draw comments from passers by but the Urban Cargo is certainly one. To be honest opinions were divided, but it certainly is different.

Sadly it's not all good news though. The rack is a clever bit of engineering but as an actual load carrying device it's far from perfect. The tubes are too thick to take a normal pannier; you can get bolt-on bag hooks but even then the bags tend to sit a bit low and forward, meaning big footed testers such as myself clip them with their heels. Also the platform isn't actually that big, and the cargo net supplied is a bit weedy: you'll need to get some proper industrial bungees if you want to strap anything heavy to it. The lights are odd too: you pay for a dynamo hub but it only powers the front lamp, not the rear.

My other main gripe was the hub gear: at nearly twice the price of a Nexus 8 I'd want the SRAM i-Motion to be noticeably better but in fact I prefer the cheaper Shimano unit. The range isn't that different but the Nexus is quieter and shifts more readily, especially under load. The hub adds significantly to the cost of the bike, as does some of the the other finishing kit on our test model, and at £1150 it's overpriced for the work it can do. The derailleur specced machine at £799 is much more in the ballpark if you want an urban workhorse, but even then it's up against machines such as the Kona Ute which are much more capable load carriers, if not as interesting to look at.

If you need your town bike to do some proper load lugging then the Bionicon isn't your best bet. If getting where you're going in comfort and style is more your thing – and where you're going isn't too far away – then it's certainly worth looking at, at least in its cheaper derailleur guise. The 2010 range extends the size options from two to four, and there are going to be refinements to the luggage system too, so it's worth waiting to see where Bionicon go with the extra work they're doing.

The Urban Cargo is a unique and comfortable urban mount that's certainly a head turner. It's stymied a bit by the slightly esoteric racks and the kit choices on this particular model which push the price up beyond what you'd really want to pay. If you want something different for your town riding it's worth looking at the derailleur model which is much cheaper than the i-Motion version we tested and would most likely score more highly as a result.

Bionicon say that "The cargo title is well earned thanks to the strong, variable carrier system. This bike is more than just a means of getting from a to b; it is an urban cruise ship. The seating position and height-adjustable handlebars allow high comfort even for longer trips.Details such as multiple drink holding positions for the essential early morning Latté on the way to work and the stylish mud guards make this bike both an every day tool and eye catcher."

On laid back rides around town it's extremely comfortable, though the comfort suffers a bit when you push a bit harder

Everything was locked down well

How would you describe the steering? Was it lively, neutral or unresponsive? neutral

The Urban Cargo handles very well, it's stable without being unresponsive

Big Apple tyres are super comfy, which is a good thing because the frame and especially the fork are super stiff

I'd go for derailleur gears over the i-Motion hub

Rate the bike for efficiency of power transfer:
6/10

Rate the bike for acceleration:
4/10

not a car-beater from the lights, but then it isn't designed to be

not one for the Champs Elysees, but as I said above, that's not what it's for

plenty of stability at all speeds

not bad on a go-slow either

easy to turn despite the weight

Rate the bike for cornering on descents:
7/10

weight and reluctance of hub to downshift mark it down

Rate the drivetrain for performance:
6/10

hub's an expensive option and doesn't add to the appeal

Rate the drivetrain for durability:
8/10

it should last though!

i'd go for derailleur gears

Rate the wheels and tyres for durability:
9/10

should last for ages

not the primary concern here

Rate the wheels and tyres for comfort:
9/10

good kit but it ain't a cheap bike

bar and stem combo is clever, brakes are sturdy

Rate the controls for durability:
8/10

will take some knocks

Rate the controls for weight:
7/10

not a big issue but they're fine on weight

Rate the controls for comfort:
7/10

stiff fork is helped by the tyres

Would you consider buying the bike? No, I'd go for the derailleur version if I was in the market

Would you recommend the bike to a friend? Only in derailleur guise 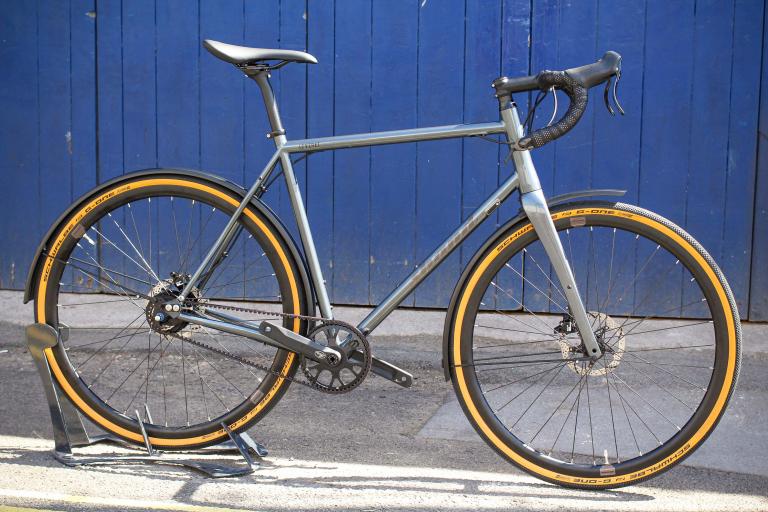 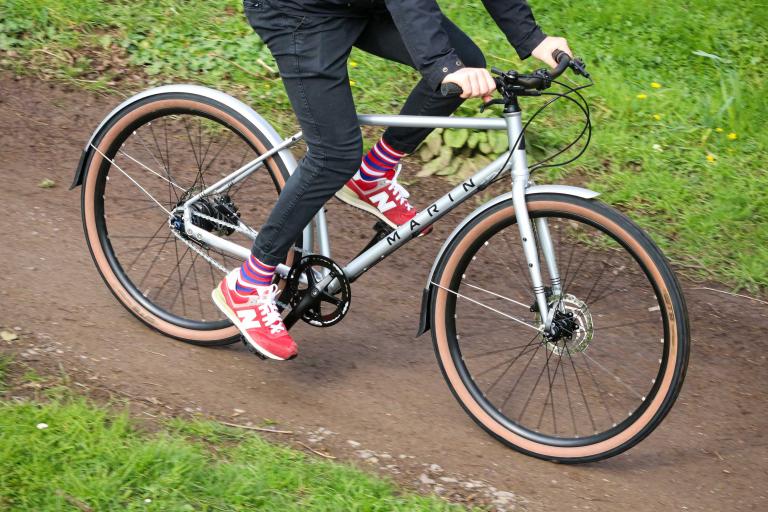 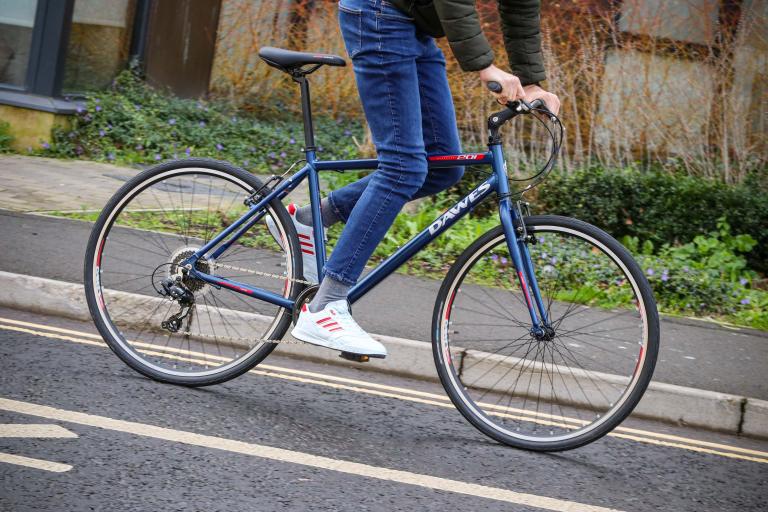