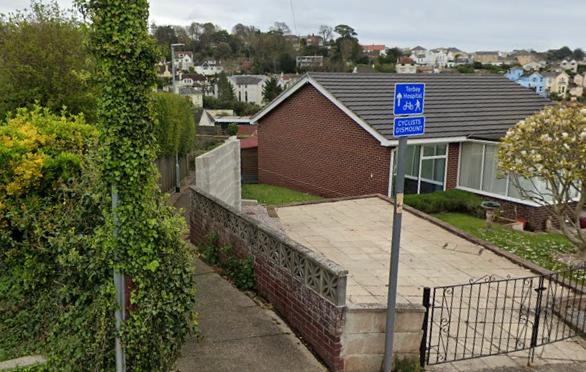 Torbay Council says it will also consider installing a ramp on the much-derided £350,000 cycle path in Torquay
by Ryan Mallon

Warning signs are to be put in place at the entrance to a Devon cycle route which contains a flight of steps, after an 83-year-old cyclist suffered multiple injuries after falling while walking his bike down the steep descent.

The path, which runs behind Torre Station through Torquay woodland, cost £350,000 to build and includes a steep flight of steps where cyclists push their bike through a gulley while climbing or descending the 30 steps.

It was opened in 2016 to offer riders a route away from the busy main road. Original sketches for the cycle route showed a gentle slope through the trees, but a 60-metre set of steps was built instead.

The controversial steps were criticised almost immediately by prominent local cyclists such as the late Ken Robertson, forcing the council to admit that the steep mid-route staircase was “not an ideal solution”.

Last week we reported that 83-year-old Ron Keegan, a former road racer and clubmate of Robertson’s at Mid-Devon CC, fell while trying to negotiate the steps in cleats, somersaulting down the steep descent and suffering a list of “cuts and bruises, various wounds and aches and pains”, prompting a five-hour stay at hospital.

Describing the steps as “crazy”, Keegan called on Torbay Council to install a ramp to replace them, while suggesting that warning signs be placed at the entrance to the cycle route to help prevent future incidents.

“There was going to be a ramp, but maybe it was too expensive to do. The path was supposed to be accessible to wheelchair users and the like, but they ended up with steps,” he explained.

“People used to build follies, and this is a folly. It's crazy, and totally inappropriate. I accept I was wearing cycling shoes with exposed cleats, and they're not designed for walking in, and in retrospect I should have looked down the steps and turned around and gone back.

“But those steps have just been an accident waiting to happen. It did happen, and I was the victim.”

In the wake of the 83-year-old’s fall, Torbay Council has confirmed that signs will be installed, though a council spokesperson was coy about the prospect of a ramp replacing the steps.

The spokesperson said: “We’ll be putting up appropriately-worded signs at either end of the route to advise path users that steps form part of the route.

“There is a proposal to install a ramp at the site, but this won’t be possible until funding becomes available.”

Keegan welcomed the news, telling Devon Live: “It’s the outcome that I wanted. The sign is great.

“The ramp is another issue, but it’s good news that they are going to revisit it.”